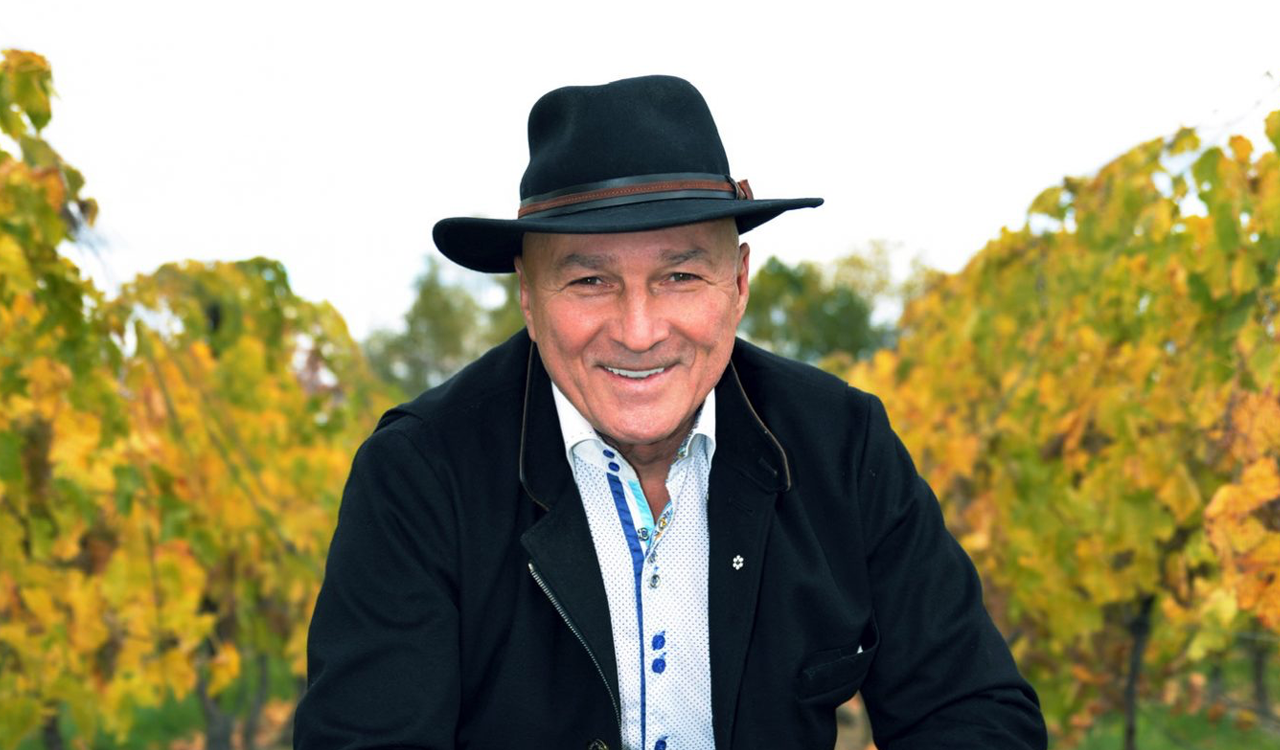 Donald Ziraldo has produced a forthcoming Riesling and Vidal Icewine at Inniskillin Estate Wineries in Niagara-on-the-Lake for the first time since 2006.

For Donald Ziraldo, wine is all about “history and a great story.”

The renowned winemaker’s latest vintage of Ziraldo Icewine has both — bringing his career full-circle while reflecting on his role in the evolution of the Canadian wine industry and the research centre created to support it, Brock University’s Cool Climate Oenology and Viticulture Institute (CCOVI).

Set for release this summer, Ziraldo’s forthcoming Riesling and Vidal Icewines were produced at Inniskillin Estate Wineries in Niagara-on-the-Lake. This is the first time since 2006 that Ziraldo has produced his wines at Inniskillin, which he co-founded alongside the late Karl Kaiser in 1975 after receiving the first winery licence since Prohibition. 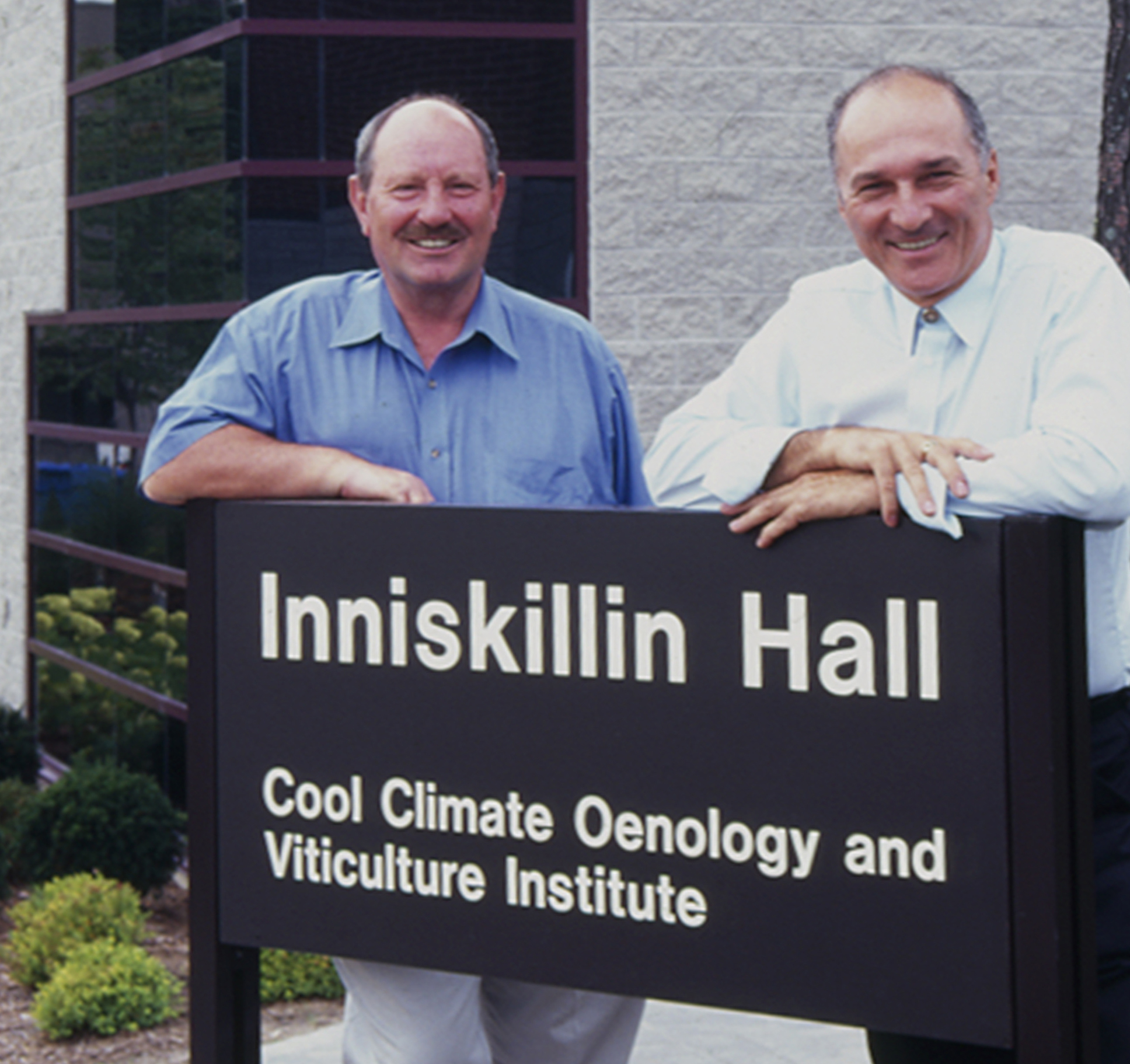 Karl Kaiser and Donald Ziraldo at the opening of Brock’s Cool Climate Oenology and Viticulture Institute in 1999.

From the moment they began making wine together, Ziraldo and Kaiser strongly believed that amazing wines could be produced in Canada. They also felt that having a strong research, outreach and educational partner would be key to helping the industry become what it is today.

Thanks to this foresight, Ziraldo joined a group of industry and academic partners to form Brock’s CCOVI in 1996, and the Oenology and Viticulture (OEVI) program one year later.

Ziraldo led the capital campaign for the institute, and, in 1999, CCOVI opened the doors to Inniskillin Hall. The building would become CCOVI’s permanent home, named in recognition of the lead $600,000 capital campaign donation by Vincor Inc. (now Arterra Wines Canada).

Ziraldo and Kaiser broke new ground when they began using highly regarded European Vitis vinifera vines at Inniskillin rather the labrusca vines that were being used in Niagara at the time. After successfully proving the vines could stand up to Canadian winters and make high-quality domestic wines, they began another game-changing venture: producing a high-quality Icewine in Niagara.

“When Karl first suggested it to me, I thought, are you crazy? We’re going to leave grapes on the vine to freeze and then make wine?” Ziraldo recalls. “Then, you had the skeptics who were also saying: ‘Are you kidding? You’re going to get someone to pay $50 to $100 for a half bottle of Canadian wine?’ Everyone thought we were completely nuts.”

After losing their first Icewine harvest to birds and overcoming other challenges along the way, their efforts would eventually pay off when the 1989 Inniskillin Vidal Icewine received the Grand prix d’Honneur at Vinexpo-France in 1991. A bottle of that historic wine can also be found in CCOVI’s wine cellar, where it is professionally preserved as part of the institute’s Icewine Collection.

“I’m Italian, so I’ll draw the analogy of the Pope giving his blessing: This was like the French blessing Inniskillin Icewine as the best dessert wine in the world,” Ziraldo says.

Thirty years later, Ziraldo brought production of his own line of Icewines back to where it all began. 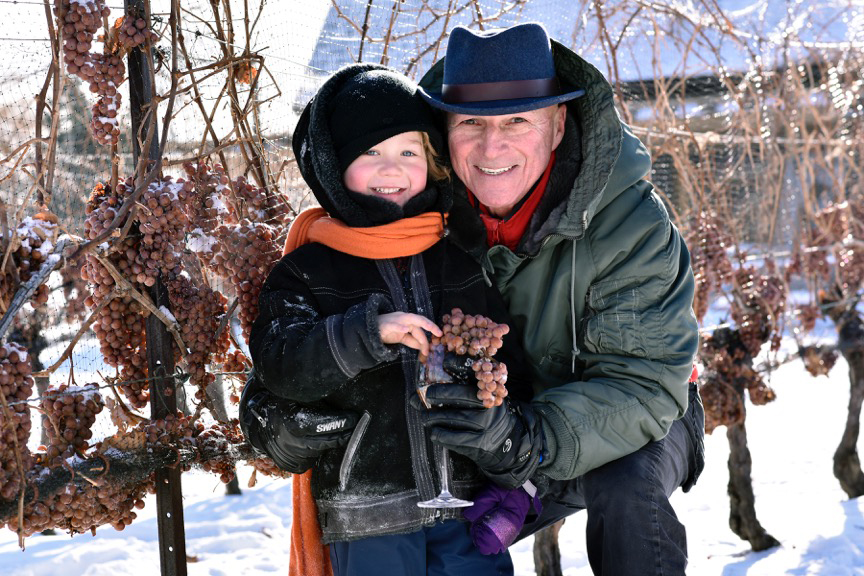 Donald Ziraldo and his eight-year-old son, Aspen Ziraldo, who accompanied him during the harvest for the forthcoming Icewine.

Ziraldo Icewine has other historical ties, too, as the Riesling Icewine is made from grapes grown on the original Inniskillin site in Niagara-on-the-Lake, located two kilometres down the road from the existing winery (built in 1978).

Ziraldo says the process has been “very gratifying” overall. Not only did he get to produce wine at the site where his career began, but he was also able to do so alongside his eight-year-old son, Aspen Ziraldo, who accompanied him during the harvest.

“For me, it was not only a feeling of carrying on Karl’s legacy but also hopefully, with it being back at Inniskillin, the legacy will continue to carry on into the future,” he says. “I don’t know if my son is going to be a winemaker or a ski bum or an architect, but he has the opportunity to carry on that winemaking legacy, if he so chooses.”

CCOVI Director Debbie Inglis, a leading Icewine researcher who worked directly with Kaiser on Icewine-related projects, says the release also provides an opportunity to look back on the region’s rich history and accomplishments.

“Icewine is such a pivotal part of our national wine story and this pays tribute to the foresight, innovation, and hard work of everyone who helped make Canadian Icewine what it is today,” says Inglis, who is also a Niagara grape grower. “With CCOVI’s 25-year anniversary coming up this October, it’s also heartening to reflect on how far we’ve come and to look forward to the exciting opportunities that still lay ahead for our industry.”