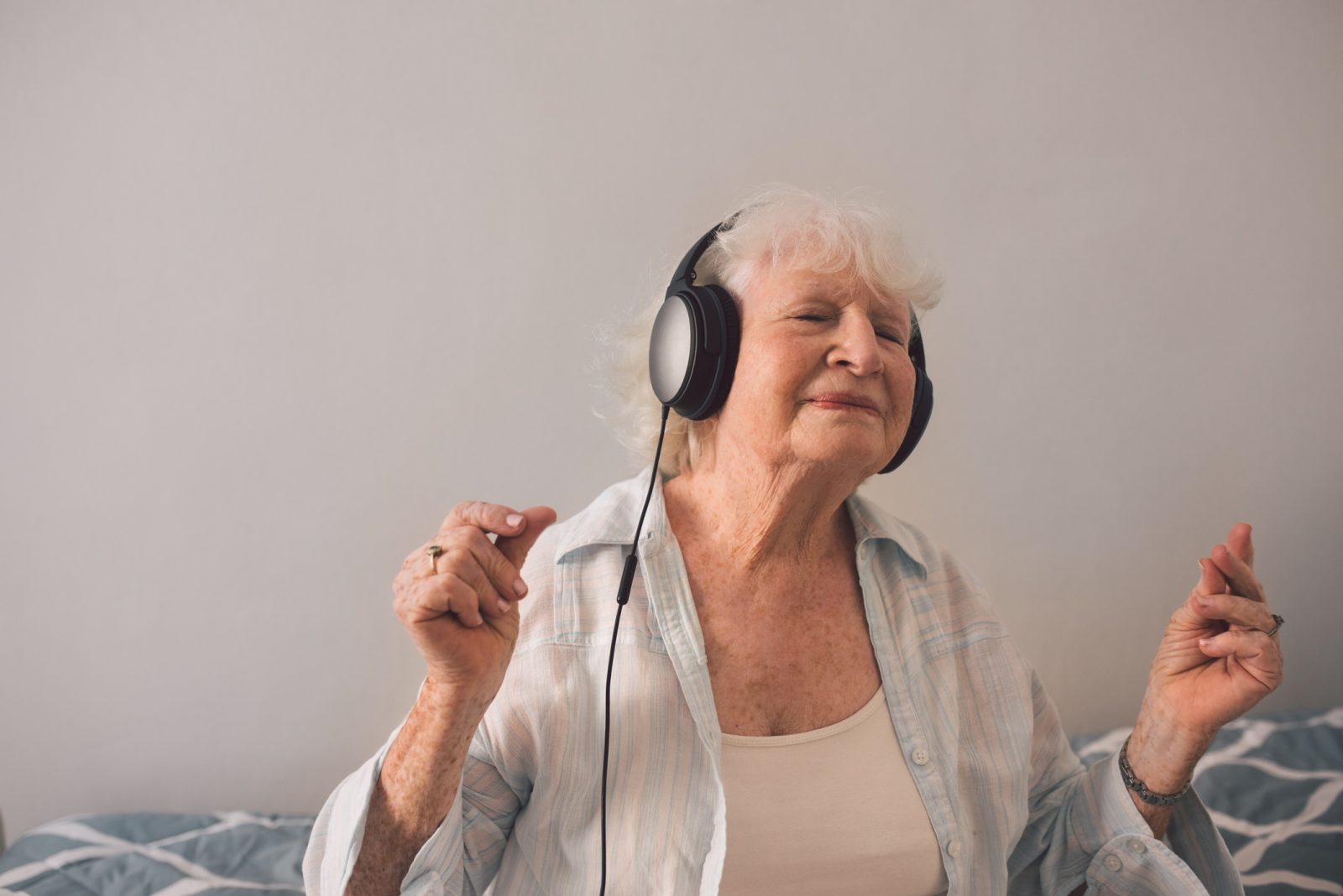 This winter, students participated virtually in the Music and Memory project in conjunction with a third-year course in PSYC NEUR 3P59, Human Neuropsychology.

For elderly patients in a long-term care facility, a carefully curated list of songs may unlock a trove of memories.

For Brock University neuropsychology students volunteering for the Music and Memory program this winter, the process of building these playlists connected learning to real life.

When Professor Veena Dwivedi in the Department of Psychology set out to teach a third-year class in Human Neuropsychology for the first time, she wanted to prioritize “putting the human back into human neuropsychology” by looking at not only the diagnosis, but also the person who receives it. 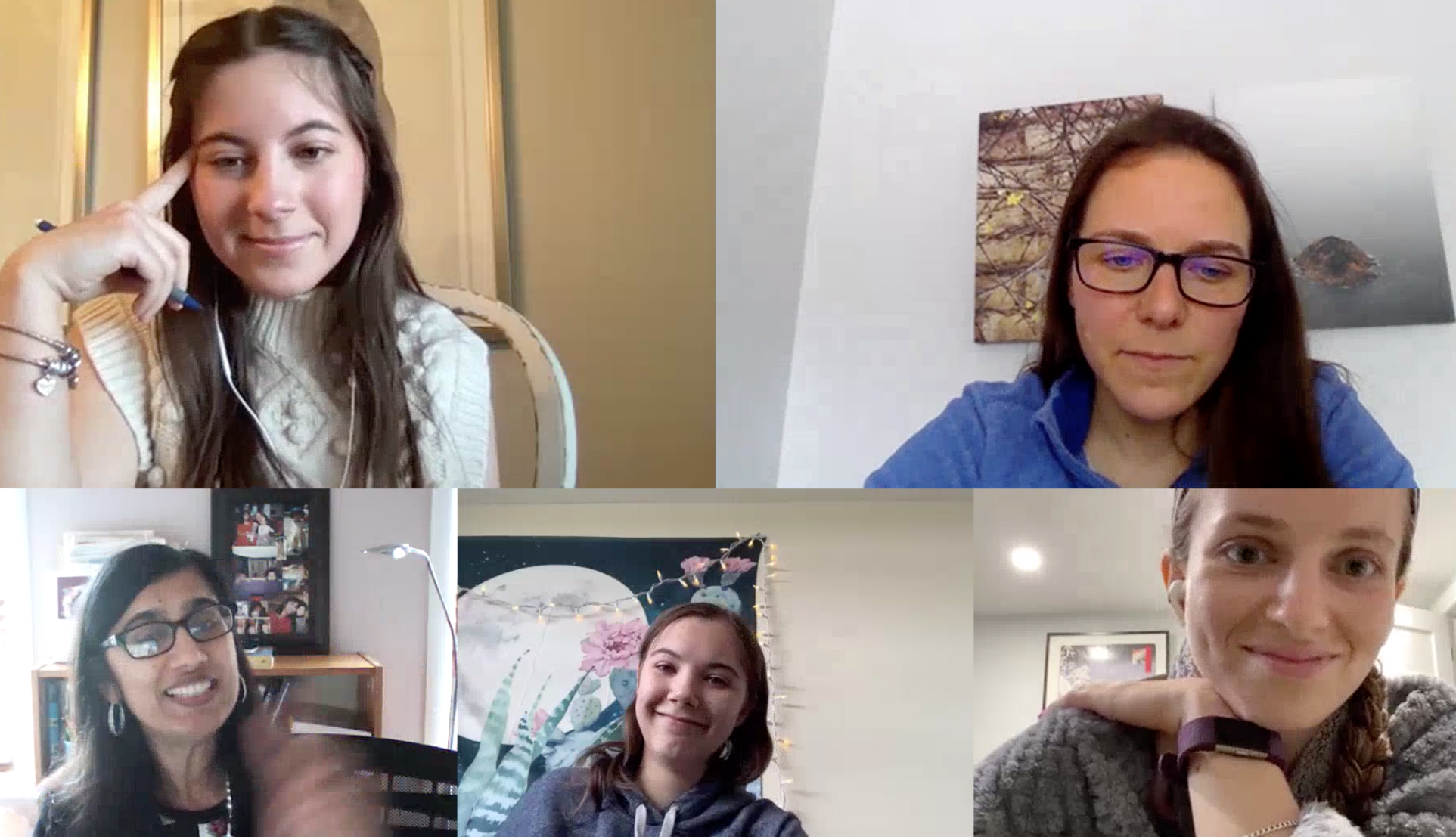 Clockwise from top left, Paige Vaccarella, Liz Kirk, Kinley Wilson, Madi Maguire and Veena Dwivedi debriefed on the Music and Memory project after it was completed.

She was inspired by a trip to Toronto she made in 2014 to see the documentary film Alive Inside, and by her own recent research showing how language processes can be affected by a person’s emotional state.

In a recent paper, Dwivedi and co-author Janahan Selvanayagam (a former Neuroscience honours student) looked at the effects of dispositional affect (a person’s emotional temperament) on the brain’s response to neutral sentences, that is, sentences without an emotional impact. The results showed that people with low negative affect (who feel pretty good), had larger responses to words that did not fit in with the sentence’s context, suggesting that affect influences cognitive processes.

In the recently completed Winter Term, Dwivedi had her 35 students watch Alive Inside as part of their course work in order to see how music therapy could affect elderly patients with neurological impairments. She then invited students to participate in an extra-credit project through the Music and Memory program run through Niagara Health. The project paired students with residents in long-term care who they met virtually and then prepared playlists for featuring the seniors’ favourite music.

The project was not without its challenges. Although the Music and Memory program has run for six years in Niagara, it had never been offered virtually. But Dwivedi teamed up with Liz Kirk, Experiential Education Co-ordinator for Brock’s Faculty of Social Sciences, and Lezlie Leduc, Program Services Manager in the Extended Care Unit for Niagara Health’s Welland Site, to find a way to make it happen.

“You can have the greatest idea in the world, but you can’t do it by yourself,” Dwivedi says. “We lucked out with great students, lucked out with Liz being able to leverage her connections through the Experiential Education team and lucked out with Lezlie being so willing and open.”

Leduc says that in spite of its challenges, the shift to remote delivery has helped keep the program running, bringing joy and variety to residents.

“Music is a huge part of their life, and to have personalized music with songs they really like brings happiness and enjoyment,” says Leduc. “The students have been amazing — they are so energetic and eager to work with us that it has been really nice and refreshing.”

Kirk says the project is a great example of experiential learning opportunities for Brock students that simultaneously serve a need in the community.

“This is the first time the Music and Memory program has been offered remotely at this site and it has been a truly collaborative learning experience at both ends to make it work and find solutions to challenges,” says Kirk, who credits its success to the “dedication and flexibility” of everyone involved.

She also believes the project had special meaning because of its timing, giving students the chance to connect with individuals whose social interactions have been limited by the pandemic.

“When the residents at the Extended Care Unit engage in conversations with the students, they are able to share openly and reminisce about their past,” Kirk says. “The hope is that even once the project is complete, the residents will continue to find joy in listening to their own personalized playlist of music that the students curated especially for them.”

The students say the project had several anticipated and surprising benefits, such as seeing neuropsychology theory work in practice, learning about another generation and finding some fresh old music for their own playlists.

Kinley Wilson, a Medical Sciences student, says she has spent time volunteering with children through Brock’s Special Needs Activity Program (SNAP) and welcomed the opportunity to support seniors in the community.

“I am proud to say I can now see the human being first, rather than focusing on the neuropsychological condition or deficit present,” she says. “This project has helped me understand so much more about the lives of those living in long-term care facilities and how something as simple as a music playlist on a $40 iPod can make someone’s day a little bit brighter.

“Music has always been a major component of my personal life, so to share that interest with another human being who is much older than me has been the utmost honour.”

Paige Vaccarella, a double-major in Child and Youth Studies and Psychology, was able to apply her knowledge from the course during the experience, which also came with unexpected results. She had underestimated how much she’d gain from participating in the project — and how much she liked Elvis Presley’s music.

Madi Maguire, a Psychology major, says she was most struck by what the music could spark for the residents.

“The most surprising part of this project for me was how one song can unlock a whole chain of memories in a person,” Maguire says. “I loved seeing my resident light up when she heard a song that reminded her of a past experience, such as a concert she went to.”

One of the program’s best features, she says, is that students don’t need to be music experts to participate; they need only an appreciation for music and an interest in making a human connection.

To this end, Maguire, Vaccarella and Wilson plan to try to start a Music and Memory club at Brock next fall to increase participation in the program.

Dwivedi says the students’ willingness to take on the project at a time when everyone was exhausted by the drain of the ongoing pandemic is truly inspiring.

“I was happy to see Brock students pick up the mantle of service, because that’s the world of publicly funded institutions, using the knowledge that we have to better our community,” she says. “The students also recognize the gift that has been given to them, which is getting to know an older adult and learning from them — going beyond health care to this idea of cultural humility.”