FACULTY FOCUS: Eric Dolansky has his head in the game 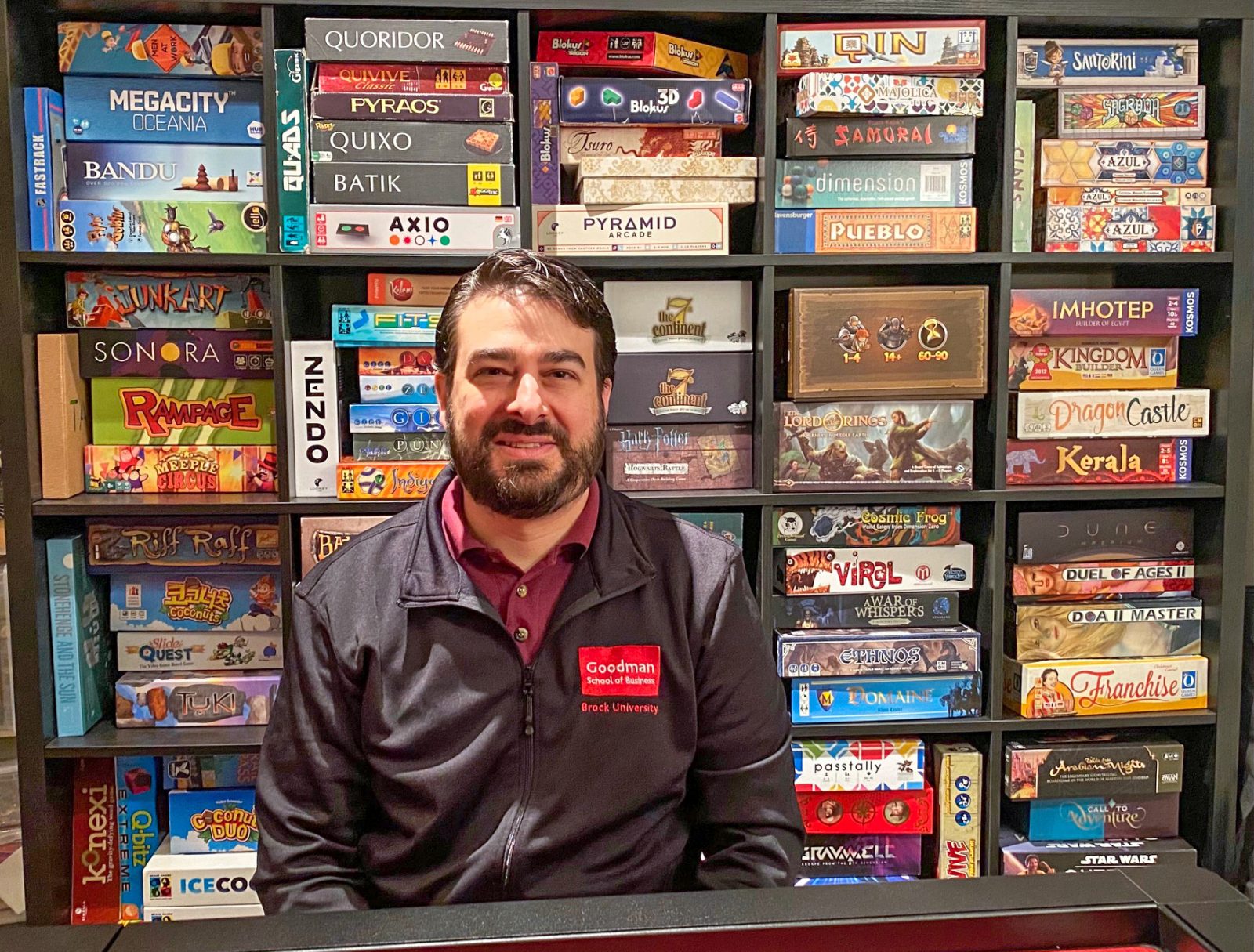 Eric Dolansky, Associate Professor of Marketing, International Business and Strategy, is an avid games collector and enjoys working that interest into his classes.

In the game of life, Eric Dolansky is always up for a challenge.

Whether it’s facing off against fellow contestants on the iconic game show Jeopardy!, settling in for a friendly showdown in an hours-long board game marathon or coaching Goodman School of Business students as they prepare for case competitions, the Associate Professor of Marketing, International Business and Strategy goes all in.

Although the avid games collector has found his stride writing business cases and working with students, his path was never Pictionary-perfect.

In high school, Dolansky first aspired to be a medical doctor before switching gears and pursuing a career in film.

“I learned a lot during film school, but the main thing that stuck with me is I don’t really enjoy being on film sets,” he says lightheartedly.

After graduating from Ryerson University, Dolansky took a job with Cineplex Odeon, working as a theatre manager for a few years. Unsure of what his future would look like with the company, he opted for a return to school, earning his Master of Business Administration (MBA) from Western University.

“While I was there, I started working on case writing and working with some of the profs, and it started to click that maybe the academic life was what I was looking for,” he says.

He went straight from his MBA to his PhD, continuing to write cases and teach courses while splitting his time between London, Ont., and the GTA, where his wife and son lived.

In 2006, Dolansky achieved the dream of Jeopardy! fans around the world — not only appearing on but becoming a returning champion with America’s favourite quiz show, taking home a three-day total of just under $50,000.

“That was the same year my son was born, so that worked out pretty well finance-wise, because I was still a student at the time,” says the now father of two.

Over time, he has found a niche for introducing his love of games into the classroom and into his business case writing.

“A few times a semester we play auction games in my pricing class, implementing some of the concepts we’ve been using and seeing them in action,” Dolansky says. “The students get into it — they get quite competitive — and the classroom gets a little bit loud and it’s a lot of fun. I look forward to those classes because they’re different and they’re an opportunity to share an interest of mine with students.”

The unconventional method has been well received in Dolansky’s classes. He has even tried to incorporate games as his courses moved online during the COVID-19 pandemic.

“It’s a different way of approaching the material, incorporating it, using it and analyzing the situation,” he says. “It’s just another way of applying it that may resonate better with some students.”

Dolansky has always been a fan of board games and has amassed an impressive 600-game collection over the years. He has worked his hobby into his case writing, which in the past has focused on several game-related businesses and won case writing awards as a result.

Business cases are essentially stories that focus on a situation a business finds itself in. It is the job of a student to read the case and come up with a recommendation, which they can justify based on their analysis, for the business to address the situation.

As the author, Dolansky writes each case along with a second document geared towards instructors that walks them through how to teach the case in their classrooms.

He also coaches teams for various graduate and undergraduate case competitions, where students get a limited amount of time — usually only a few hours — to analyze a case and prepare a presentation with their resulting recommendation.

“I coach them for four to six months prior to the competition, so they get used to working with each other as a team and develop their skills for analyzing, presenting and selling their ideas,” he says. “It’s great being able to work with interesting, engaged students — to help them reach their full potential and guide them along the way to excelling not only in the competition, but also beyond.”

While he has focused on the game industry in the past, Dolansky has also written about a variety of businesses, including restaurants, and is always on the lookout for interesting subjects. He is in the process of completing two co-written cases focused on a mortgage broker and an augmented reality app.

“Students want to learn about what decisions businesses are making right now. They’re interested in high-tech products, ecommerce and social media,” he says. “There’s constant turnover with these cases, so there’s a constant need for more of them.”

“It is a hands-on, applied way of doing things that students really respond to,” he says. “Rather than just reviewing material, we’re having discussions, applying concepts and working together.”

Dolansky hopes his students will find the same passion in their careers that he has for his work, regardless of the industry they end up working in.

His words of advice: Be patient.

“It took me a very long time to figure out what I wanted to do with my life,” he says. “Just because some of your friends knew what they wanted to do right out of high school doesn’t mean you have to.

“It’s about finding the right fit for you, and it doesn’t happen at the same time for everybody.”