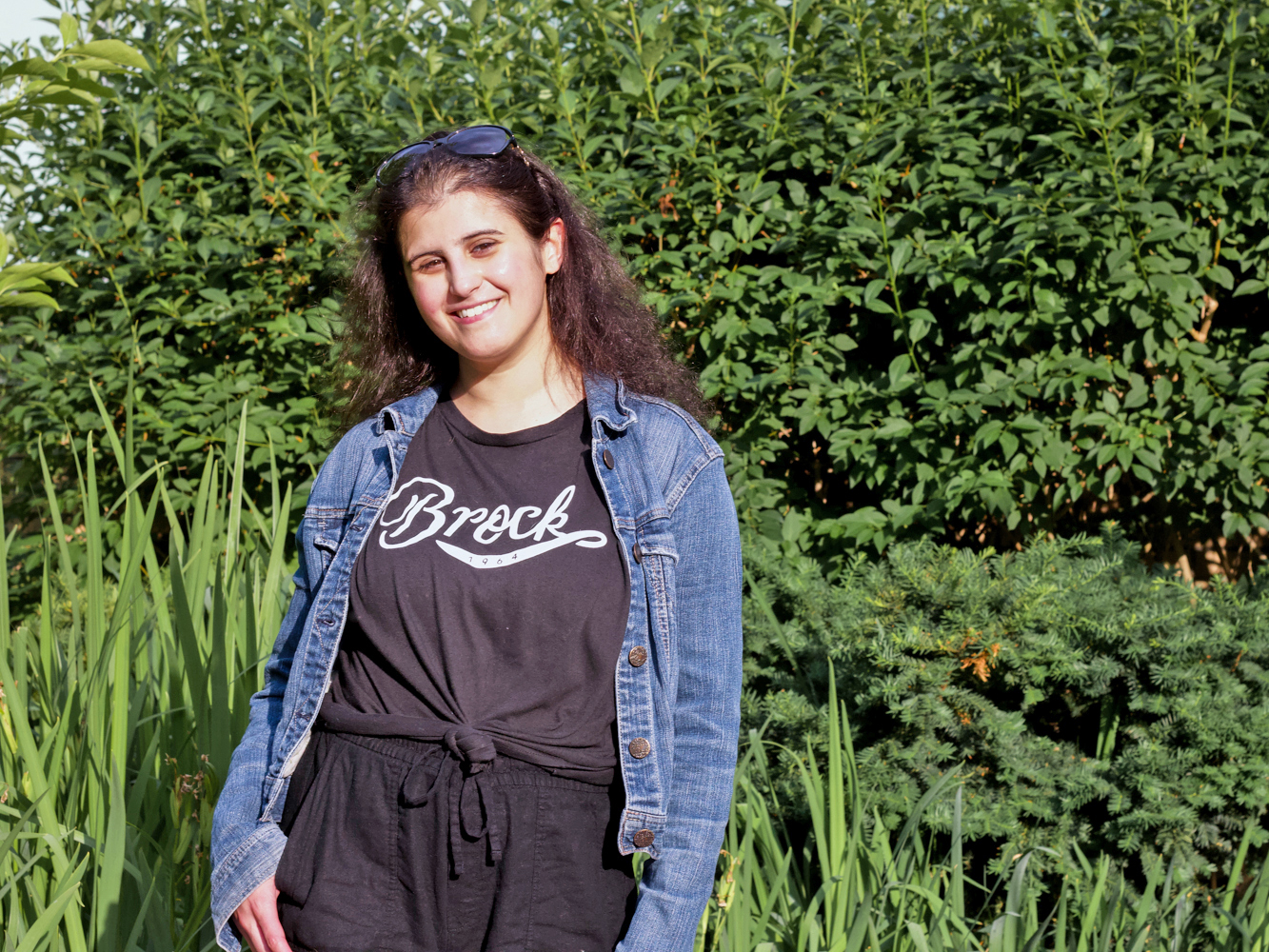 Leena Hosien is one of 32 students graduating Friday, June 18 who make up the University’s largest cohort to have completed the Campus-Wide Co-Curriculum program. She will graduate with a Bachelor of Arts combined major in French Studies and Philosophy.

Like many first-year students, Leena Hosien met a group of friends shortly after starting at Brock. They quickly bonded with each other and shared many university experiences.

They went to the same events, did the same activities and often made decisions as a group.

At first, it was a welcome social community to be a part of. Over time, however, Hosien had difficulty relating to her new friends. She didn’t share similar interests or values with them, and she felt limited and stuck in her ways.

“In my first couple of years, I didn’t experience very much because I wasn’t sure what existed,” she said. “I was scared and I was shy.”

A turning point came in Hosien’s third year when she learned about Brock University’s Campus-Wide Co-Curriculum (CWC) program and how it could help set a new path for her to follow.

The Humanities major is one of 32 students graduating Friday, June 18 who make up the University’s largest cohort to have completed the CWC, a guide that helps students identify and navigate the wide variety of opportunities outside the classroom that can maximize their Brock experience and personal development.

The CWC features 10 co-curricular domains, which range from Brock spirit and community engagement to leadership and teamwork. Each domain has its own required and elected experiences, some within the University community and others within the greater communities of Niagara and beyond. 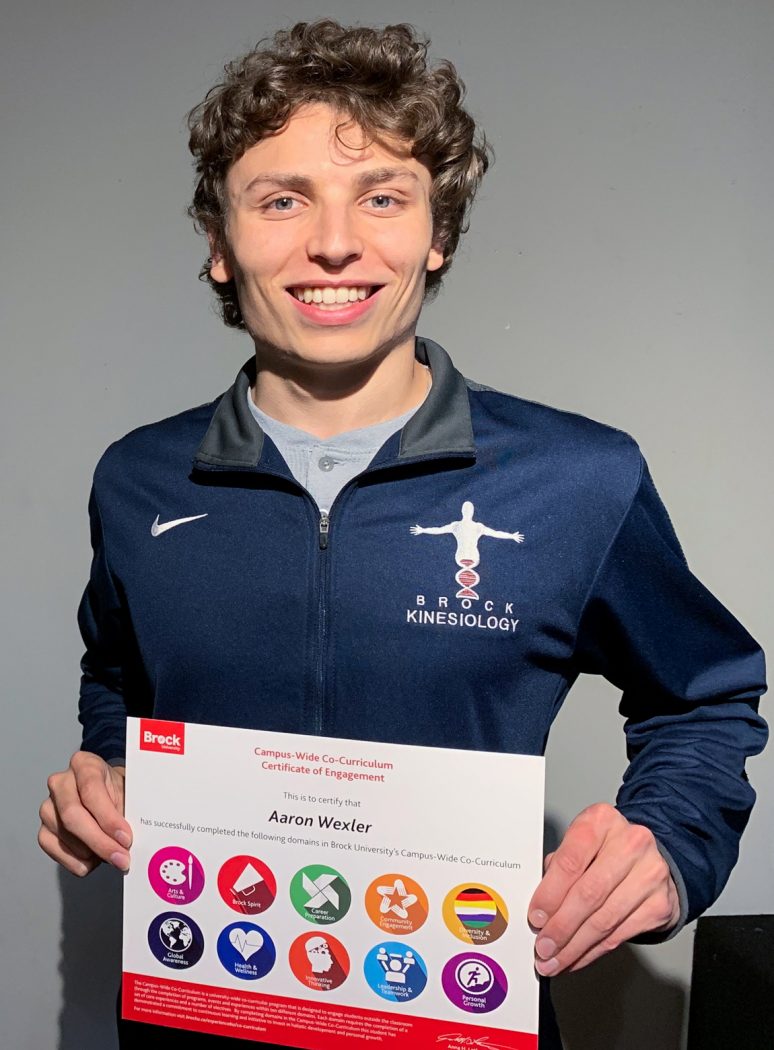 Aaron Wexler will be graduating Friday, June 18 with a Bachelor of Kinesiology. He is one of 32 graduating students who have completed Brock’s Campus-Wide Co-Curriculum program.

“There was such a great variety of things I could be doing at school that I didn’t even consider,” said Hosien, who will graduate with an Honours Bachelor of Arts in French Studies and Philosophy. “It pushed me out of my comfort zone. I thought, why don’t I just try? If I accomplish it, great. If I don’t, at least I have a whole bunch of experiences under my belt.”

Hosien’s participation with the CWC allowed her to explore new places on campus, find a job as a tutor with A-Z Learning Services, and become involved with several groups on campus, including the French Club, American Sign Language Club, Dragon Boat and Niagara Strong, which is a non-profit organization that advocates for mental health-related issues.

Most importantly, the CWC allowed her to meet a new group of friends — ones she could see herself keeping throughout her life.

“I was seeing a bunch of people I had not seen before,” she said. “I got to know certain groups of people and I started to really like them. I thought, ‘I can see myself getting comfortable with who I am and with these people around me.’”

For Kinesiology major Aaron Wexler, the CWC offered a way to officially document the leadership experiences he was already pursuing.

Wexler learned about the CWC the summer before his final year of undergraduate studies, and by then he had already accumulated most of the required experiences. Once a student completes 66 co-curriculum experiences, they officially finish the CWC and are awarded a certificate of engagement.

“I started looking at the domains and realized my previous experiences fell in line with what the CWC required,” he said. “Join a Brock club: I’m part of six. Participate in an exercise class: I teach three. By the time I had documented everything I had completed up until that moment, I realized that I had done most of it.”

In addition to his involvement with six student clubs, most as president, Wexler volunteered his time to teach classes at Power Cord, a wheelchair accessible exercise gym for people with a spinal cord injury, multiple sclerosis or amputation. He was also a coach in a circuit class for community members with Parkinson’s disease, a lead volunteer with the side-by-side exercise program at the Bridges for Autism Centre, a student athletic trainer with the varsity swim team, and a tutor with A-Z Learning Services. He was also involved in several mentorship programs: He founded the Brock and McMaster University Medical Science Mentorship Program, co-founded the Faculty of Applied Health Sciences Mentorship Program and worked as a senior leader with the Engagement Communities Mentorship Program.

Students who complete the CWC normally wear red cords as part of their Convocation regalia to distinguish themselves from their peers. With degrees being conferred via an online portal this year, the 32 students who completed the CWC will receive the red cords as part of their Convocation package, which includes their degree parchment, an alumni pin, a bag of Class of 2021 confetti and other items.

“The promise of red cords incentivized me to want to complete the CWC in the first place,” Wexler said. “But then the experiences, learning and understanding that came with completing additional requirements pushed me to finish the program.”

Wexler spent the Fall Term of his final year completing the domains he did not have experiences with. For example, to complete arts and culture, he visited historical landmarks on his daily walks with his roommate. For personal growth, he completed a learning style self-assessment to better understand how he studied, and for diversity and inclusion, he attended a virtual powwow to learn about the history and culture of Indigenous Peoples.

Wexler said his experiences with the CWC and his leadership involvement with student clubs allowed him to secure a summer internship with Spinal Cord Injury Ontario.

“Not only am I able to work within my field, but I’m also able to work a job that was originally designed for a marketing student,” Wexler said. “I have the know-how and the understanding to use the programs that marketing students would be using, but also the intellect of a health-care provider to be able to properly represent and advocate for this population.”

In the fall, Wexler will be pursuing a Master of Physical Therapy at the University of Toronto, with the goal of becoming a neurological physiotherapist — a passion he derived from his volunteer work with Power Cord.

Hosien is currently working at Collège Boréal in Toronto teaching English to French-speaking newcomers. She’s unsure what’s next but sees travelling in her future so she can spend time living in new places, including with family in Palestine. She wants to continue improving her French and learning Arabic and other languages. She’s also considering applying to a master’s program or Teacher Education program but may wait a few years.

“I believe in getting as much out of my experiences as possible before I go back into learning,” she said. “I want to make sure my experiences stick.”

Hosien encourages current and incoming first-year students to get involved in university experiences right away, including the CWC.

“Start as soon as possible so you can figure out what you like and what you don’t like,” she said. “That way, you get the most amount of time with the people you love the most while doing the things you love the most. These are going to be your four, five or more years of university, so why not do as much as possible at the very beginning so you can get the most out of your time here?”