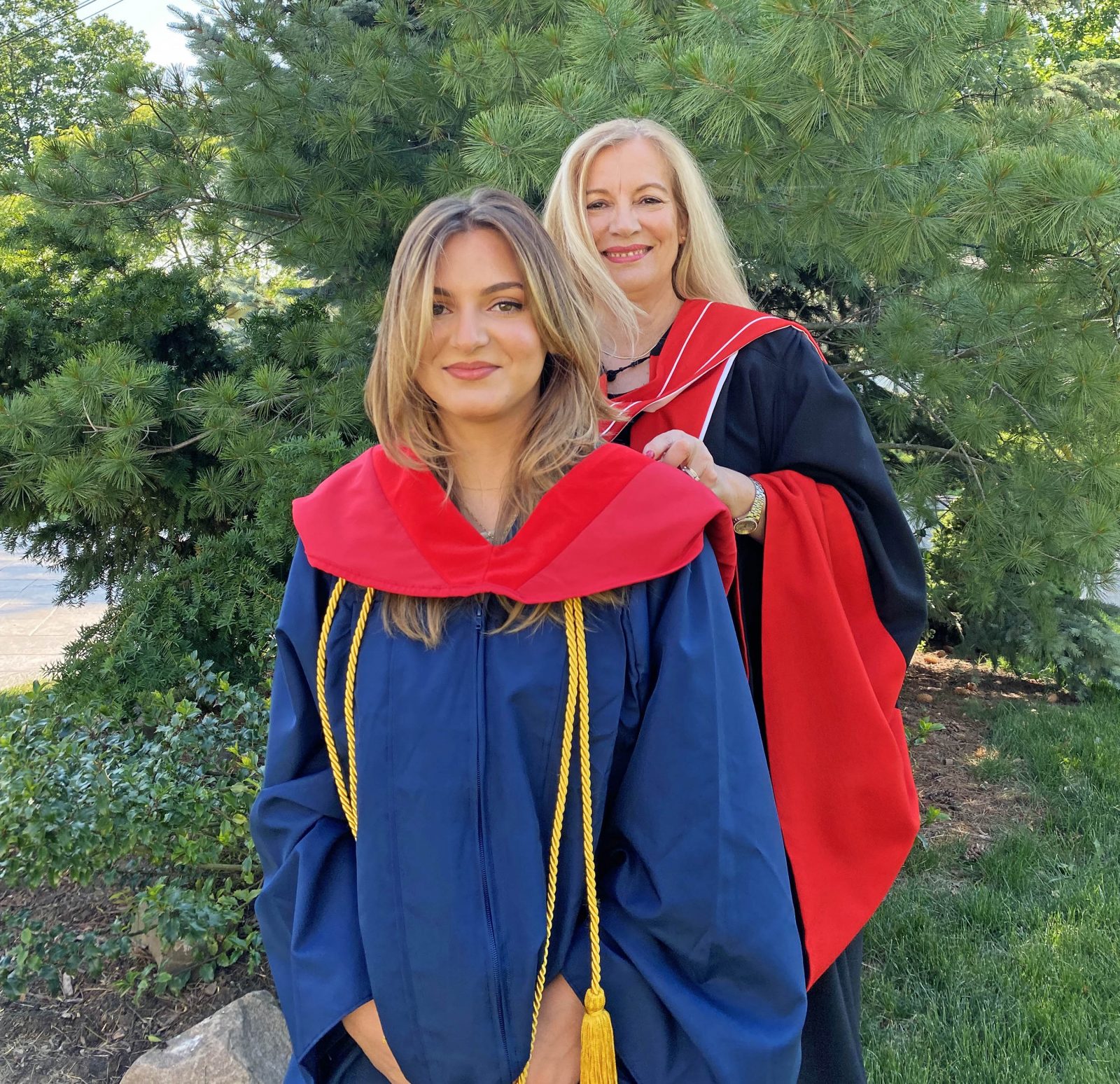 Although the COVID-19 pandemic meant Brock’s Spring Convocation held Friday, June 18 wasn’t exactly what they had envisioned, Nicole Tsakiridis and her family were still determined to celebrate.

When Tsakiridis began her time at Brock University four years ago, she already had a plan in place for graduation. As she crossed the stage at Convocation, she would be hooded by her mother, Professor of Health Sciences Evangelia Litsa Tsiani, while her sisters and father, a medical doctor and Professor at McMaster University, proudly watched on.

“We had these plans for my mom and dad to be dressed up in their PhD/doctoral gowns, with me in my Brock Bachelor of Science (BSc) gown and hood,” says Tsakiridis.

However, due to public health restrictions, Brock’s 109th Convocation ceremony was held virtually.

“I know many of my friends, fellow classmates and their families had plans for celebrating Convocation,” says the Medical Sciences graduate. “My dad hooded my sister when she obtained her BSc degree from McMaster and my parents thought it will be unfair to not celebrate my graduation. We decided to go ahead with the celebration in our home.”

As Tsakiridis was hooded by her mother during a small family ceremony, she reflected on a saying Tsiani routinely uses:

“Please, do not drown in a teaspoon of water.”

The Greek expression means “you’re drowning in something that isn’t that big,” Tsakiridis says. “It may seem like too big of a challenge or too intimidating at the time, but you really can take a deep breath, relax, think and you will find a solution. Don’t give up. Keep trying.

“My mom tells me that when she sees I’m faced with a problem, and when I’m stressed out and worried about something,” she says.

Tsakiridis’ parents went through similar stress as students, being the first ones in their families to receive a university degree.

“The horrors of the Second World War stopped my grandparents in Greece from advancing beyond early grade school,” Tsakiridis says.

Tsiani and her husband came to Canada to earn their PhDs in the area of diabetes at the University of Toronto. Tsakiridis plans to continue her studies in pursuit of a master’s degree.

“It is a bit intimidating and stressful but my parents tell me that I can achieve anything with hard work and dedication,” she says.

Tsakiridis says her academic journey started at the dinner table, where her mother and father would lead conversations about diabetes, cancer, diseases, science and many other subjects.

Tsakiridis and her sisters were all ears and lapped up the conversations. These were supplemented by occasional trips to Brock labs, where the three girls experienced the world of science first-hand.

These dinner table discussions about science and the lab visits put Tsakiridis on the medical sciences path.

But she wasn’t sure where she wanted to study. Again, early childhood experiences made Brock University the logical destination.

“I took my first swimming lesson at Brock, I had my first ballet performance at the O’Sullivan theatre and now I’ve graduated with a Brock Medical Sciences degree,” she says. “It feels like the halls were much bigger back then.”

Tsakiridis also took the summer science camp at Brock and volunteered in many studies conducted by Brock University professors exploring the influence of diet and exercise.

“My mom registered me and my sisters in many Brock University research studies,” she says. “She always emphasized the importance of research.”

Tsiani has instilled in her daughter the idea that life is a journey.

Tsiani quotes the poem Ithaka by Kavafis, her favourite Greek poet: “As you set out for Ithaka, hope your road is a long one, full of adventure, full of discovery… Keep Ithaka always in your mind. Arriving there is what you’re destined for. But don’t hurry the journey at all.”

During Spring Convocation, Tsiani hoped to pass that same message along to all her students.

“As for your journey from now on, do not feel intimidated and scared to set high expectations in your life,” she says. “Dream big and have dedication and work hard. Persist and persevere. Do not fear. You all have great potential.”

Tsakiridis is keeping her mother’s exhortations close to heart.

“At the end of the day, they’re the lessons I’ve learned along the way,” she says. “Brock has taught me to work hard. I was able to conquer the challenges, all because I had the right guidance and support from my parents and my professors when I needed it. Brock will always be in my heart as I set out to explore more.”