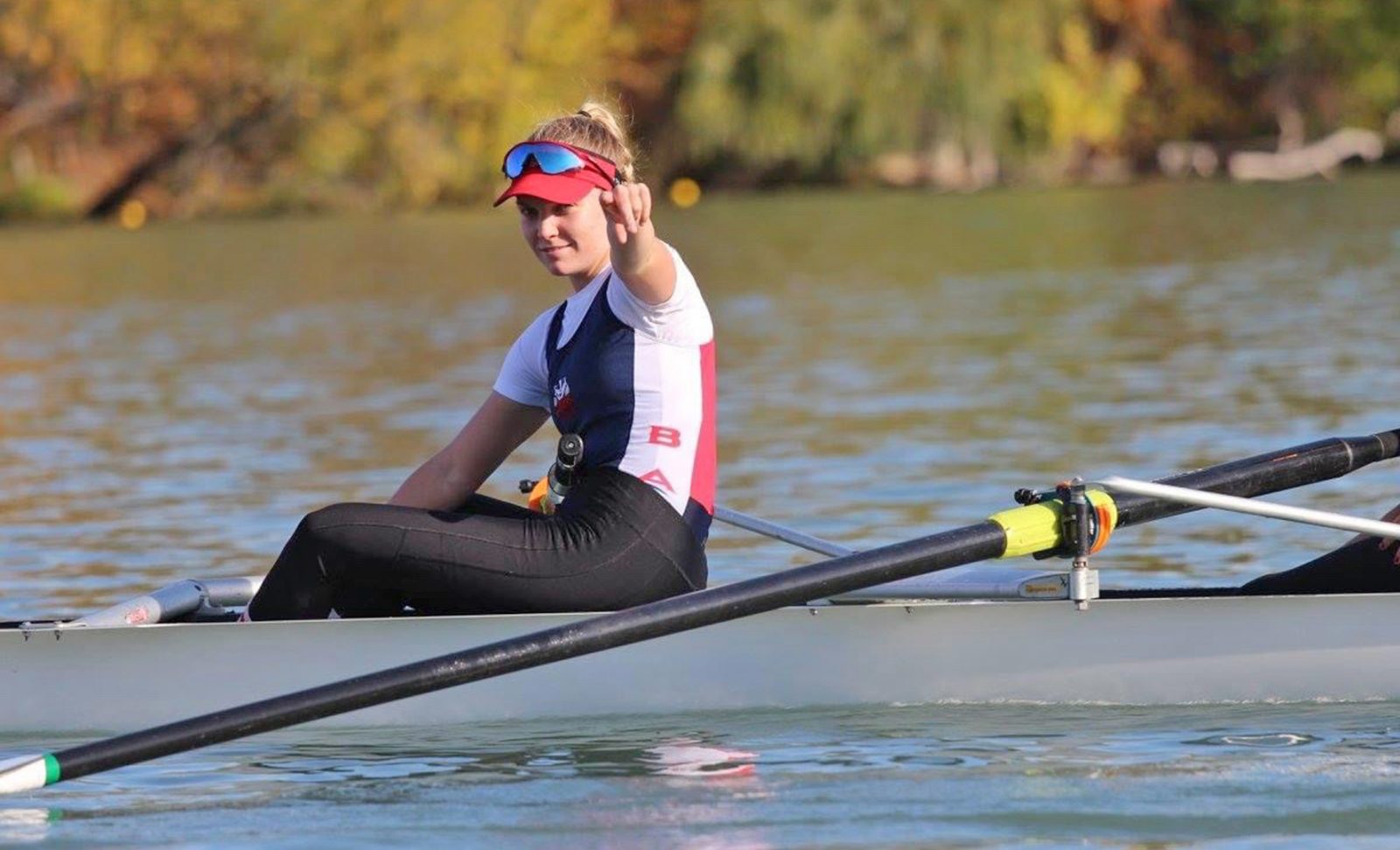 Erin Corkery of the Brock women’s rowing team graduated with a Master of Arts in Applied Health Sciences on Friday, June 18.

Rower Erin Corkery said the work ethic she crafted during her time at Brock University and competing for the Badgers will serve her well in her future career.

“Time management is a common skill student-athletes carry with them into the working world, especially in the sport of rowing where we start practices every morning at 5 a.m.,” Corkery said of her time with the women’s rowing team.

Corkery graduated with a Master of Arts in Applied Health Sciences, focusing on Health and Physical Education, during Brock’s Virtual Spring Convocation on Friday, June 18.

Her master’s research focused on the relationship dynamics between coach and athlete in high-performance sport.

The work has led her to pursue a PhD in Kinesiology at the University of Victoria in September.

Corkery rowed five seasons for Brock and qualified for the Canadian University Rowing Championships each year. The element of teamwork left a lasting impression on Corkery during her final rowing season as a Badger in 2019 before the COVID-19 pandemic struck.

“I learned that it is so important to invest in your teammates and to build each other up,” she said. “We embodied the mentality that we were a family, where we gave each other unconditional support, which served us well during some difficult times.”

Coach Ron ‘Swede’ Burak said Corkery was a difference-maker for her crew.

“​Erin has been a great contributor for the Badgers rowing team,” he said. “It’s been a pleasure to be her coach. Her leadership and motivation helped the lightweight women to the best results we’ve had in our last OUA racing season.”

She was a member of the women’s lightweight four, and each season they would get closer to winning an Ontario University Athletics gold medal.

The supportive team environment put the Brock women’s lightweight four crew over the top in 2019.

The crew jokingly dubbed themselves ‘The Lads’ as they banded together before that final season and made a commitment to put everything they had into that upcoming season. They had a goal of winning OUA gold.

The Badgers capitalized on home-water advantage as they went head-to-head with the powerhouse Western Mustangs during the OUA Rowing Championships at Henley Island in Port Dalhousie.

“It was just like a movie. I get chills just thinking about it,” Corkery recalled. “The whole race was a dog fight, and even when we heard the two beeps at the finish line, none of us in the boat knew if we finished first or second — that’s how close it was.”

Corkery and the women’s lightweight four outpaced the Mustangs by less than a second (7:38.29).

When the team discovered they won, they broke into tears. The squad consisted of Corkery, Carly Zanatta, Jennifer Beaudette, Alicia Piazza and coxie Brooke Kew.

“I have never experienced anything like it,” she said. “I was so proud of ‘The Lads’ and all the challenges we pushed through together.”

That season, Corkery was named Oarswoman of the Year by Brock and the St. Catharines Rowing Club.

“It was truly an honour to be given these awards after such a successful year of racing,” said Corkery. “I’m so blessed to have been part of such a distinguished program and community.”

Corkery grew up in Peterborough and was raised in a rowing family where her parents competed, including her two sisters.

“I grew up on the water and riding in my dad’s coach boat, so I had the best seat on the course to watch races,” she said. “The sport came naturally to me.”

Her first race came at the age of seven, where she competed at the Canadian Indoor Rowing Championships, and started racing on the water in Grade 9 for her high school and Peterborough Rowing Club in the summers.

She drifted away from the sport for a few years before coming to Brock when an old friend from high school convinced her to go to a Badgers training camp.

“It helped that I spent lots of time here at Henley Island when I was a child,” Corkery said. “The Niagara region is a beautiful place with so many hidden gems. Brock University is underrated and has given me so many unforgettable experiences both in academics and sports.”