Medical Sciences student-athlete excelling on ice and in class 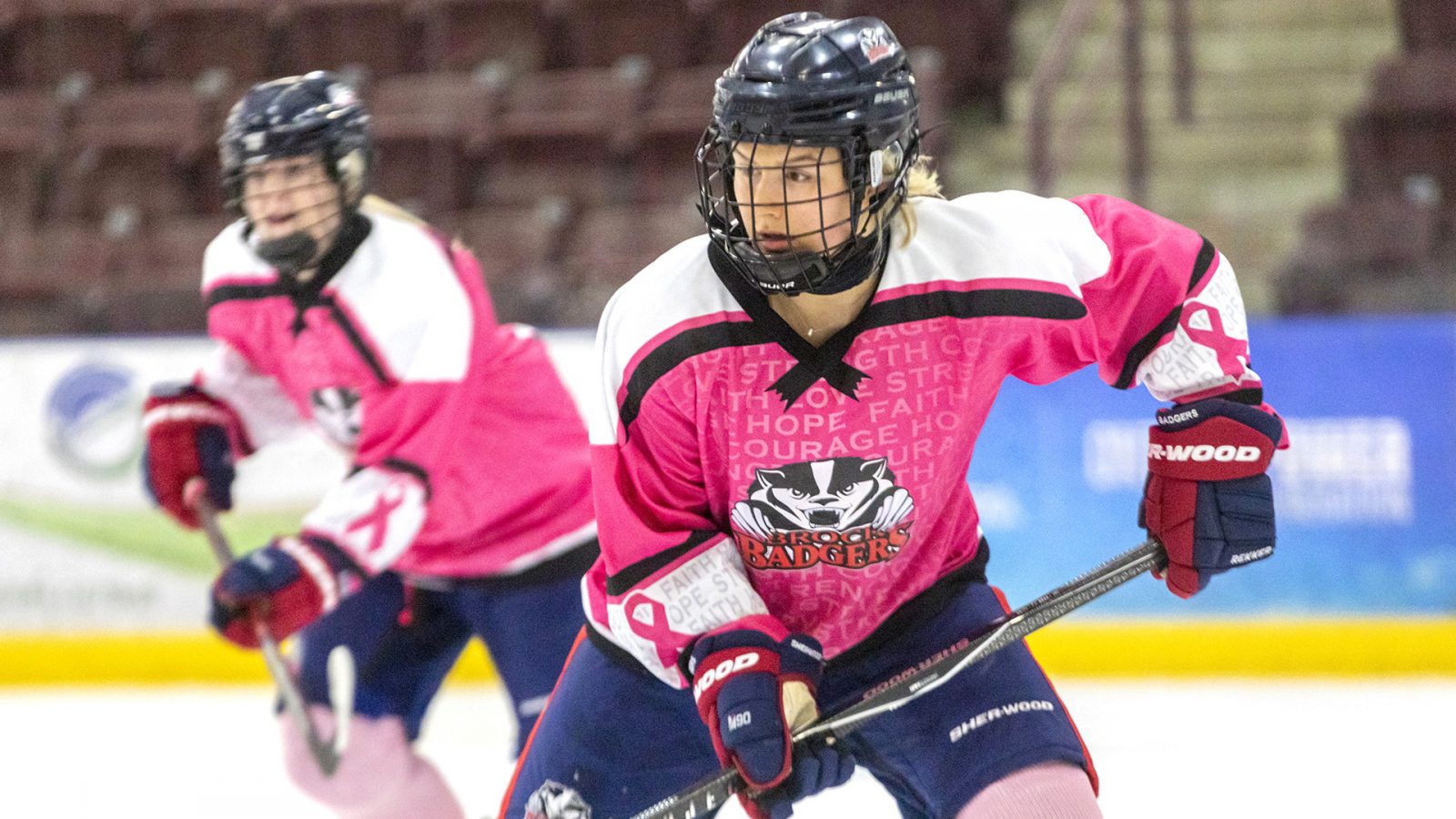 Rebekah Feld, a defenceman, plays a key role on the Badgers’ power play and penalty kill.

Rebekah Feld’s favourite story about her studies at Brock University involves scrubbing in alongside a general surgeon.

“It was the most unreal experience I’ve ever had,” said Feld, a third-year Medical Sciences student. “The surgeon and her team took the time to explain the procedures to me and answered any questions I had. I also observed orthopedic surgery and even got the chance to hold an extracted gall bladder.”

After the experience, she called her parents with the same enthusiasm as a hockey player who had just scored their first goal.

“I told my parents that I’ve never been so inspired,” Feld said. “It’s a memory that always reminds me why I do what I do.”

While she’s still a year away from graduation, Feld’s drive to succeed has already resulted in the Richmond Hill native amassing an impressive resumé of accolades.

She was one of 10 recipients of this year’s President’s Surgite Award, one of Brock’s most prestigious honours, and she recently earned two consecutive Natural Sciences and Engineering Research Council of Canada (NSERC) Undergraduate Student Research Awards. 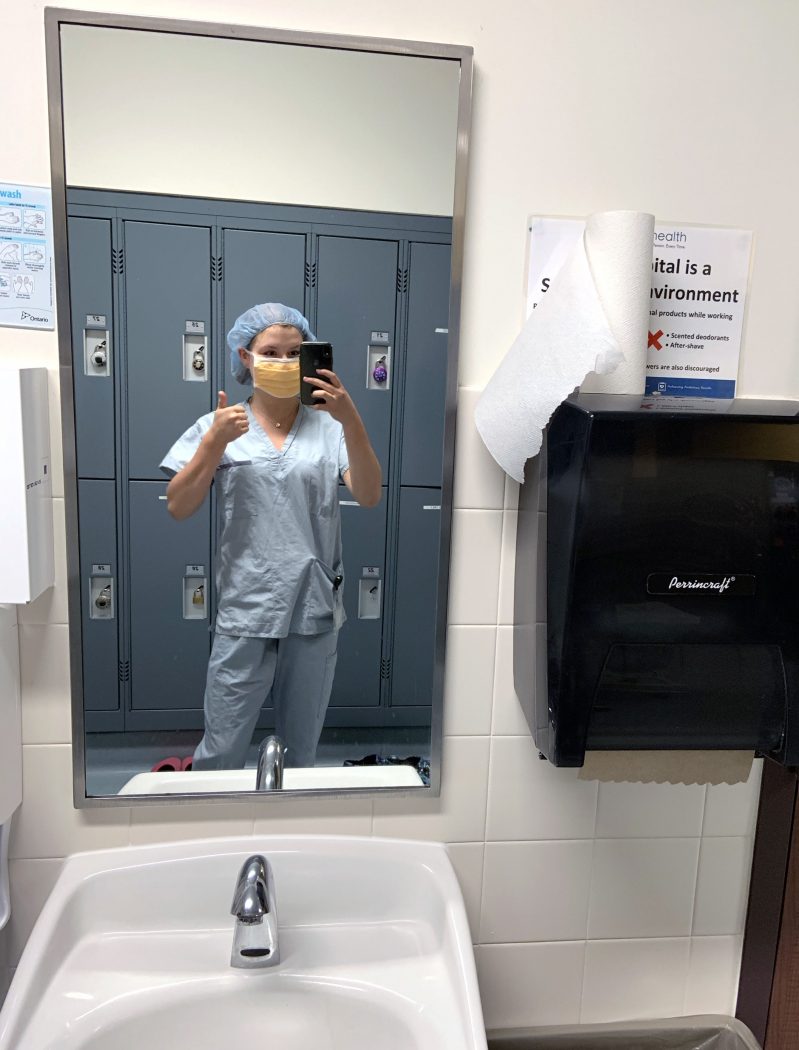 Rebekah Feld had the opportunity to job shadow a surgeon for a day at Niagara Health’s St. Catharines Site through Brock’s Med Plus program.

“The NSERC awards are very prestigious and given to a student based on their academic record, research aptitude and the quality of training they are going to receive,” said Brian Roy, Interim Associate Dean in the Faculty of Graduate Studies and a Professor of Kinesiology. “The goal of the award is to allow outstanding students the opportunity to nurture their interest and fully develop their potential for a research career in the natural sciences and engineering.”

Feld eats, sleeps and breathes everything to do with her career goal: working in health care.

When she discovered Med Plus, which provides practical experience to students with the most cutting-edge information about the health-care sector, she knew it was a perfect fit.

Students who complete Med Plus go on to pursue further education in the medical field, as well as physiotherapy, chiropractic and graduate school, among others.

“I’m so thankful for all the doors Brock has helped open for me in terms of experiences,” Feld said. “My time at university so far has completely exceeded any expectations I ever had.”

Since joining the Brock women’s hockey team in 2018, Feld has carved out a significant role in the Badgers lineup, said head coach Margot Page. Feld skates on both special units: the power play and penalty kill.

“Rebekah is an important member of our defence corps. The upside that ‘Feldy’ has is that she can also play as a forward when we need her to,” Page said. “She is swift and has a nose for the net. This versatility makes her an invaluable player on our team. In addition, she has a strong drive and passion for excellence and works hard to perform to the best of her ability in everything that she does. These are the types of players you want on your team and are a pleasure to coach.”

In her first two seasons with the Badgers, Feld earned back-to-back U SPORTS Academic All-Canadian honours, which recognize student-athletes who achieve an academic standing of 80 per cent or higher while playing a U SPORTS-sanctioned sport.

Playing on the women’s hockey team also allowed for a natural introduction to Roy, who also happens to be the team’s sports nutritionist.

“Research is something I’ve always been interested in,” said Feld. “Dr. Roy’s team took me under their wing as a volunteer with lab work, and ever since, I’ve been fortunate to receive research grants for summer work.”

“Rebekah demonstrates outstanding time management skills,” he said. “I have also observed that she can keep her emotions in check when things aren’t going as planned. She rarely gets worked up and tends to focus on the task at hand, which helps her be so productive both on and off the ice.”

This summer, Feld is working with Kinesiology Professor Wendy Ward to develop a systematic review investigating the relationship between tea consumption and bone health.

“Helping to find new knowledge in the field is something I enjoy being a part of,” Feld said. “It’s been a great opportunity to further my understanding of the relationship between human health and nutrition.”

In addition to her studies and work with the Badgers, Feld has donated her time to a number of organizations. She has served as a peer mentor and a team co-ordinator with a 3D Print Personal Protective Equipment Project that emerged at the beginning of the pandemic in response to PPE shortages on the front lines, volunteered at the Niagara Children’s Centre assisting an occupational therapist, and assisted with the Brock Jr. Badgers Girls Development Camp and youth hockey workshops during the regular season.

Feld also jumped at the chance to join the inaugural Brock Women in Sport Group when it launched last September and is currently an executive with the University’s Women in Medicine Club.

“Sport provides girls with so many life lessons from perseverance to teamwork, leadership, time management and confidence,” Feld said. “Both groups aim to educate and raise awareness of gender and other disparities in the sport and medical industries. These are important to me because these issues persist in our current world. I want to play a role in changing this dynamic. I hope to help motivate others to keep working hard through their passions to reach their goals.”