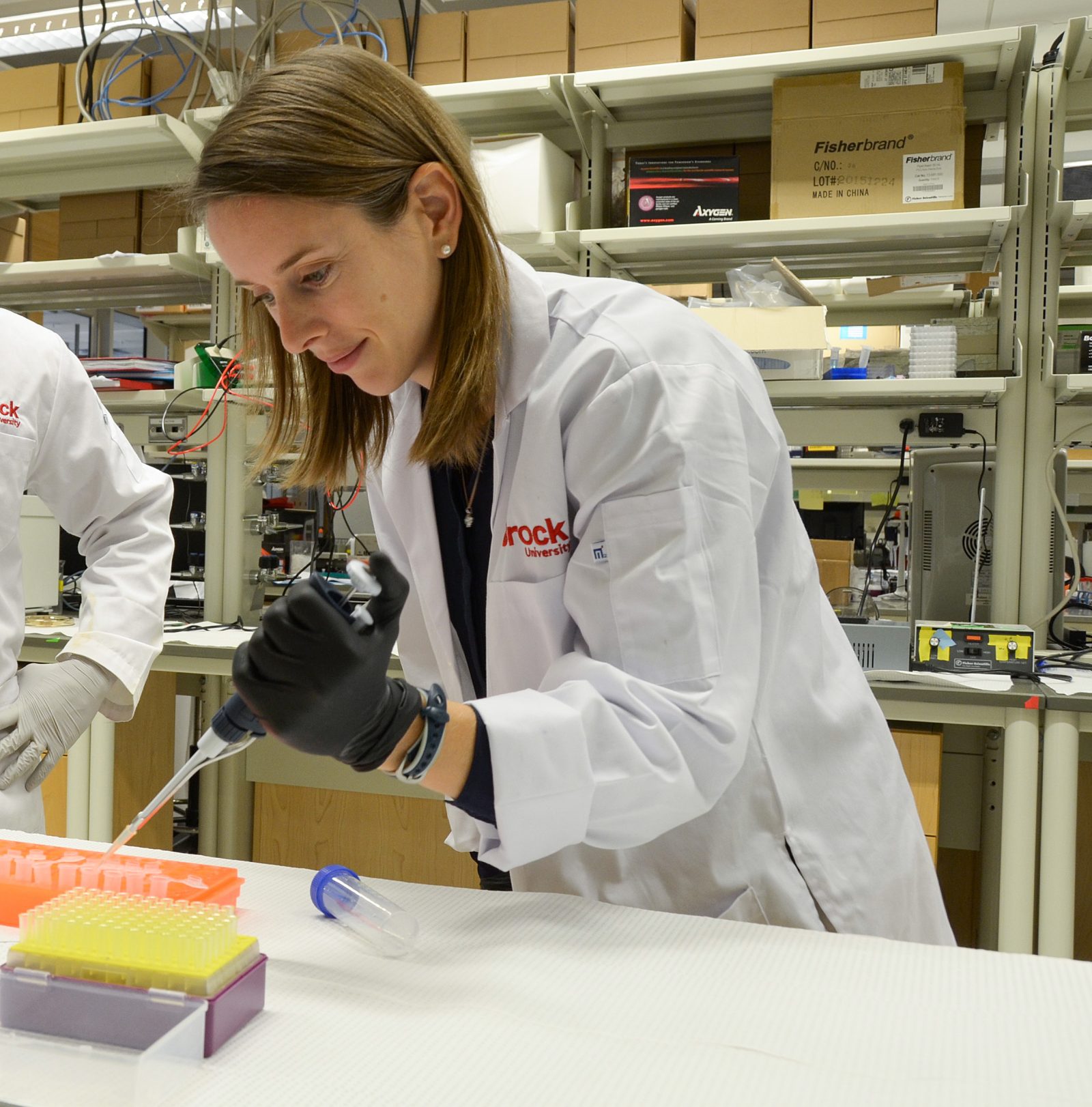 Assistant Professor of Health Sciences Rebecca MacPherson is the first recipient of Brock University's new Award for Early Career Research and Creative Activity for her research on metabolic diseases and late onset of Alzheimer’s disease.

Exercise and eat a nutritious diet. There’s yet another reason to pursue both those goals to lower the chances of disease down the road.

“I study metabolic diseases and late onset of Alzheimer’s disease as a metabolic disease,” says Assistant Professor of Health Sciences Rebecca MacPherson (PhD ’14). “There can be a genetic component of it but a large component is also lifestyle factors.

For her research on metabolic diseases and late onset of Alzheimer’s disease, MacPherson has been awarded Brock University’s inaugural Award for Early Career Research and Creative Activity.

“I am very pleased to see Dr. MacPherson’s outstanding and important work being recognized with this inaugural award,” says Vice-President, Research Tim Kenyon.

“Her research impresses upon us the importance of diet and exercise in preventing late onset Alzheimer’s disease and, indeed, for a healthy life overall.”

MacPherson completed her PhD studies in Brock’s Faculty of Applied Health Sciences near the end of 2013. Her thesis examined skeletal muscle fat metabolism and involved three separate studies and a review paper that were published in peer reviewed journals.

That same year, she captured first prize in the graduate student research showcase at the Canadian Society for Exercise Physiology’s (CSEP) annual conference. CSEP is the principal body for physical activity, health and fitness research and personal training in Canada.

After pursuing a post-doctoral fellowship at the University of Guelph, MacPherson returned to Brock in 2016 to take up a position as an Assistant Professor in the Faculty of Applied Health Sciences.

She has co-authored or authored several important studies in recent years including an award-winning review article for new investigators in the American Journal of Physiology (Regulatory Integrative and Comparative Physiology) in 2017, where she was the only author. In a 2017 study, working with then-post-doctoral fellow Val Fajardo, they found that trace elements of lithium in drinking water can slow death rates from Alzheimer’s disease.

Another study in 2018 reported that a diet high in saturated fats and sucrose can lead to increases in markers related to Alzheimer’s disease when paired with the normal aging process. Other publications have focused on the effects of estrogen loss, and exercise in cell culture, rodent and human models.

MacPherson was awarded funding from the Canada Foundation for Innovation’s John R. Evans Leaders Fund (JELF) to purchase specialized equipment to study the interactions between diet and exercise, metabolism disturbances that lead to disorders like obesity, Type 2 diabetes and Alzheimer’s disease.

She attributes much of her success to her students. Last year her research group worked together to publish a review paper that was selected as a winner of the Applied Physiology, Nutrition and Metabolism Award for Nutrition Translation.

One of MacPherson’s PhD students, Bradley Baranowski was invited to give a talk related to the publication in January for the “Nutrition for Mental Health” webinar offered by the Canadian Nutrition Society.

MacPherson says she’ll use that money as part of a fundraising effort to purchase a tissue processor for her students and other researchers interested in preparing samples for viewing under the microscope.

She is the first recipient of the Award for Early Career Research and Creative Activity, which was announced last year.

“As the inaugural award holder, Dr. MacPherson sets a high standard that subsequent award winners will distinguish themselves by achieving,” he says.

MacPherson says she is happy to have this opportunity to promote diet and exercise.

“Prevention is key,” she says. “It’s been a difficult year for people working at home, but it’s important to get up and do something active every day, whether that’s walk around the block or run — just try to make an effort to be active every day and make healthy food choices every day.”