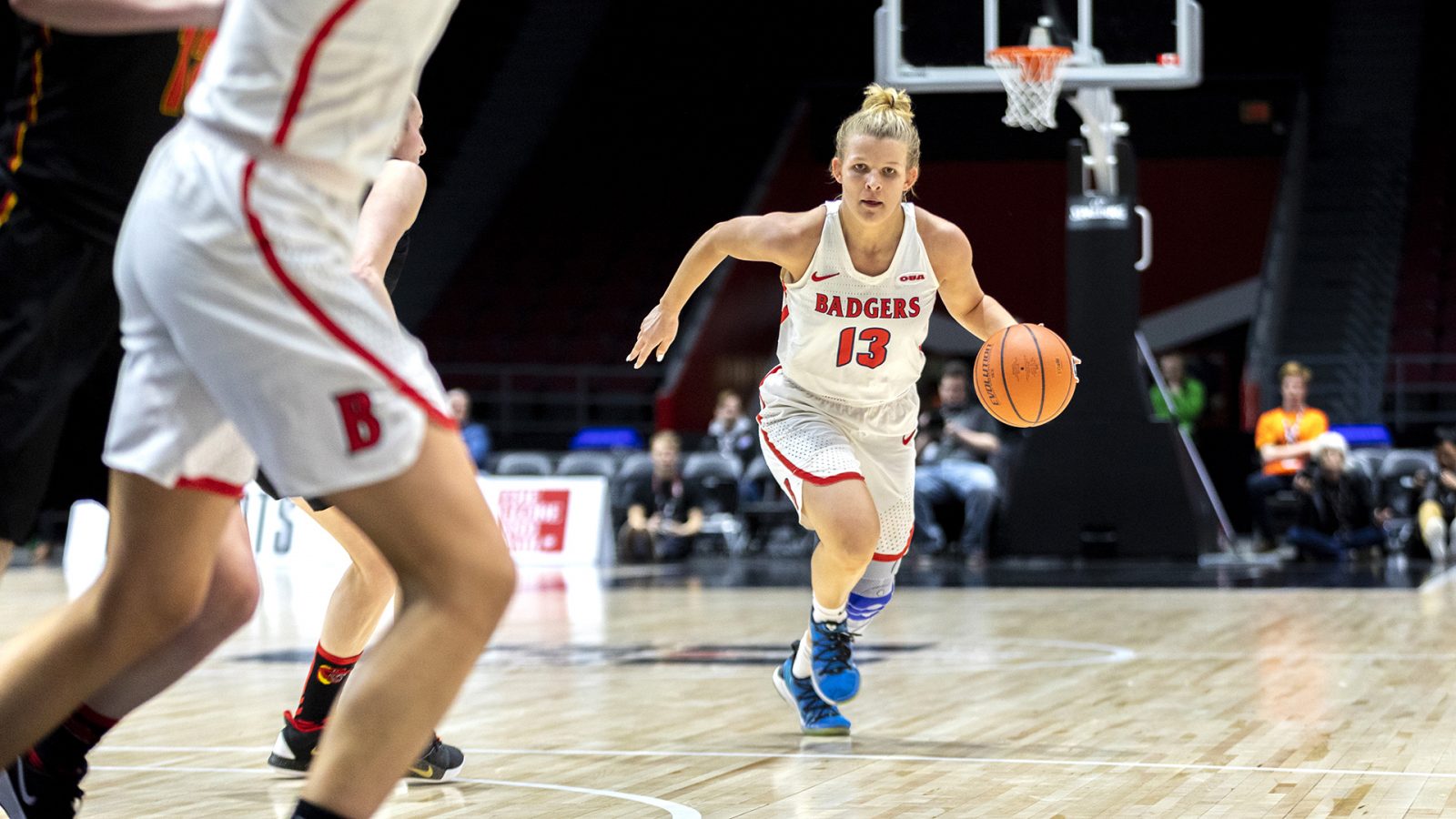 Kristin Gallant of the women’s basketball team earned the 2020-21 David S. Howes Spirit of Brock Award for her commitment to Brock University and the Niagara community.

The 2020-21 sports season may have been cancelled due to the COVID-19 pandemic, but the efforts of Brock’s student-athletes and student staff continued to shine.

Their contributions were recently recognized through a series of awards bestowed by Brock Sports.

“While I wish we could celebrate our award recipients in person, I’d like to thank all of our Badgers who have played a crucial role during these difficult circumstances,” said Emily Allan, Interim Director of Brock Sports. “It has been wonderful to witness the growth of these award winners, and I hope they know what a lasting impact they’ve made.”

Kristin Gallant of the Brock women’s basketball team earned the David S. Howes Spirit of Brock Award. Named after Howes, a St. Catharines businessman and longtime Brock supporter known for his commitment to the University and the Niagara community, the award is presented to a student who embodies the spirit of Maj.-Gen. Sir Isaac Brock with leadership, courage, innovation, inspiration and community service.

Gallant, a fourth-year Psychology student, volunteered at the Niagara Children’s Centre, where she worked with children with exceptionalities and served as a BU4U peer mentor to first-year students, helping them navigate life at Brock through an individualized approach.

“It was a rewarding experience to work with and get to know children at the centre on a deeper level,” said Gallant, who is from Milton but has lived in St. Catharines since she started attending Brock. “The experience with BU4U helped transform my leadership within academics. I’ve learned what it takes to inspire others and help them succeed just as I’ve had role models inspire me throughout my basketball career.”

Gallant was keen to get involved when Brock Sports launched the Women in Sport group last September and is an active participant while organizing monthly meetings.

Captain of the women’s basketball team, she has never missed a game and rarely misses a practice. She is also a counsellor for the Brock basketball summer camps.

These are awarded each year to current female and male student-athletes who excel both academically and athletically.

Irwin, a second-year Medical Sciences student from Markham, and Narwal, a third-year Kinesiology student from Etobicoke, were named 2019-20 U SPORTS Academic All-Canadians in December.

Irwin led the Badgers in power-play scoring during her rookie season in 2019-20, with four goals and nine points in 24 games.

“Emma is one of the most complete elite-level student-athletes I have seen come through our program,” said Brock women’s head coach Margot Page. “She engages in everything she does at such a high level and works hard to constantly better herself. It’s fantastic to see her recognized for this with this award.”

“Bobby has been a privilege to coach at Brock. He’s made huge progress with his wrestling,” said wrestling head coach Marty Calder. “He has a great set of foundational skills that have helped him evolve both as a student and as an athlete. Bobby is completely committed and knows how to prioritize and sacrifice. He embraces the hard work and challenge of being a student-athlete. He’s also a great teammate — someone who leads by example in our program.”

The honour is presented to student therapists who lead by example and are consistently present for practices and games while going above and beyond the call of duty to provide extraordinary taping, treatment and rehabilitation for varsity athletes. The recipient represents Brock Sports Medicine’s (BSM) values and helps fellow staff or athletes when needed.

Hood Tidman, who is completing her Master of Professional Kinesiology, spent two years working with each the Badgers women’s softball and basketball teams. During this time, she mentored incoming student therapists and became known for her attention to detail for injury prevention, care and rehabilitation, which kept Brock’s varsity athletes in the game.

Loiacono’s passion for Athletic Therapy transcended his work with the men’s baseball and basketball teams beginning in 2018. He was offered a rare double placement during fall and winter thanks to his positive attitude and desire to contribute. A Kinesiology student, he was recognized for his exceptional hands-on skills, which are valued by student-athletes and fellow student therapists, and for consistently displaying a solid ability to translate theory into practice.

Seabrook was voted Intern of the Year by the lead performance coaches.

“Isaac is one of the most polished performance coaches we have produced to date,” said Steve Lidstone, Associate Director, Sports Performance and Sports Medicine. “He’s a leader in data management.”

Seabrook joined Brock in 2019 as a graduate student in Applied Health Sciences after completing a Bachelor of Science in Kinesiology at Queen’s University.

He worked with the Brock wrestling team and expeditiously became a leader and mentor for the rest of the BSP student coaches.

The BSP Impact Award was awarded to Lyanne Martin.

This award is granted to a BSP student or BSPC staff member who has left the program better than they found it, utilizing their passion and skills to create something that improves BSP as a whole.

Martin first joined BSP in 2017 as a student performance coach with the men’s volleyball team and has since taken the lead in assisting the BSM staff in developing return to play programming for injured varsity athletes with Team Buildr software.

Martin, who is in the final semester of the Master of Professional Kinesiology program, continually strives to improve her education by taking opportunities to develop her skills through courses and conferences.

She also assists in designing and implementing reconditioning programs for common musculoskeletal injuries such as post-op ACL reconstruction, MCL/LCL sprains and ankle sprains.

“Lyanne has set the standard for combining the experiential education opportunities in both BSP and BSM and using the various assessment and training skills learned to create return to play programming for varsity athletes,” said Lidstone. “She is well on her way to becoming a great practitioner.”