Reflecting on a year without athletics at Brock 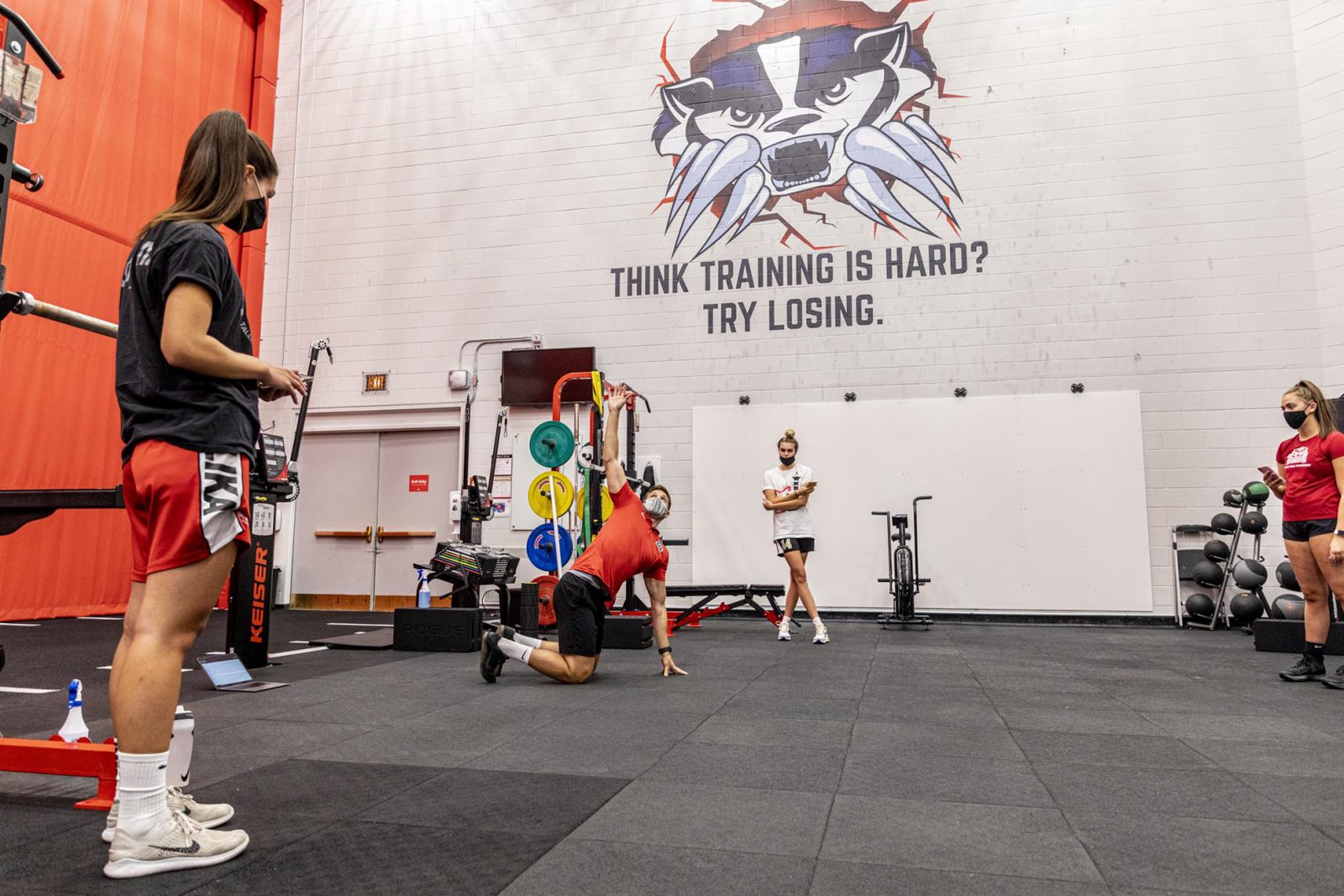 Student-athlete training programs were phased-in for a small group of sports as only six members of each team are allowed to train in the Brock Sports Performance Centre at a time.

NOTE: This is one in a series of articles published by The Brock News to mark the one-year anniversary of Brock University suspending in-person, on-campus classes due to the COVID-19 pandemic. To read all of the articles in the series, click here.

No one was more invested in the Brock Badgers making it to the 2020 U SPORTS Women’s Volleyball Championships than Alanna Norris.

Norris had a front-row seat for the program’s roller-coaster journey since 2015.

She missed a season because of a significant knee injury. She played for two different head coaches. And when the team needed her to move from offensive outside hitter to defensive libero, she obliged. 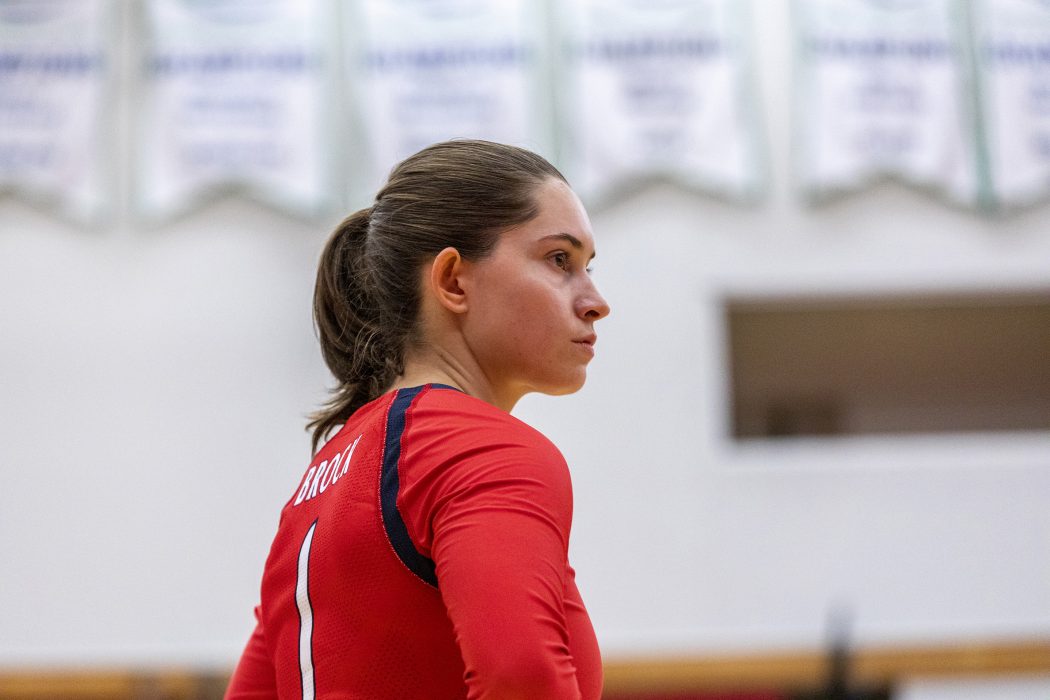 Alanna Norris is one of 100 student-athletes who were unable to compete during their senior year due to the COVID-19 pandemic.

Head Coach Steve Delaney called Norris the team’s ‘unsung hero’ as the Badgers powered their way to the top of the division, reached their first Ontario University Athletics (OUA) Final Four since 1991 and punched their ticket to the national championships for the first time in program history.

A week before they arrived in Calgary for nationals, Norris and the women’s volleyball team cheered on the Brock women’s basketball team as they made their historic run to a silver medal at the U SPORTS national championships.

Now, it was their turn to take a shot at history.

The Badgers flew to Calgary, got a practice in and attended the annual pre-tournament banquet on Thursday, March 12.

The team was excited, Norris said, yet there was underlying nervous energy among the eight teams gathered at the host site, the University of Calgary.

“We heard the news of other nationals and sporting events being cancelled (because of COVID-19),” said Norris. “We knew something was up because there was lots of chatter floating around our team and the other teams there.”

After the banquet, Delaney called an emergency team meeting.

It was a moment Norris will never forget.

“We were all gathered in a hotel conference room, waiting for our coaches and waiting to face the news we all didn’t want to hear or accept,” said Norris. “There were lots of tears and confusion, and it felt like something was ripped right out of our hands. We worked hard, on and off the court, and deserved to compete there. That was the hardest thing to accept.”

The COVID-19 pandemic had forced U SPORTS to cancel the tournament due to the evolving global situation. The next day, Calgary and other municipalities in Western Canada closed public facilities.

It was a sombre flight home to Ontario for the Badgers.

The OUA would ultimately announce the cancellation of its fall and winter sports programming and championships.

Norris is among more than 100 Brock student-athletes who had their senior year cancelled and won’t be returning to their teams next season.

“That disappointing feeling when we heard the news at nationals carried into this year,” said Norris. “Especially as a senior, I feel incomplete, but proud, knowing I made it to nationals in my time here at Brock, alongside my best friends.” 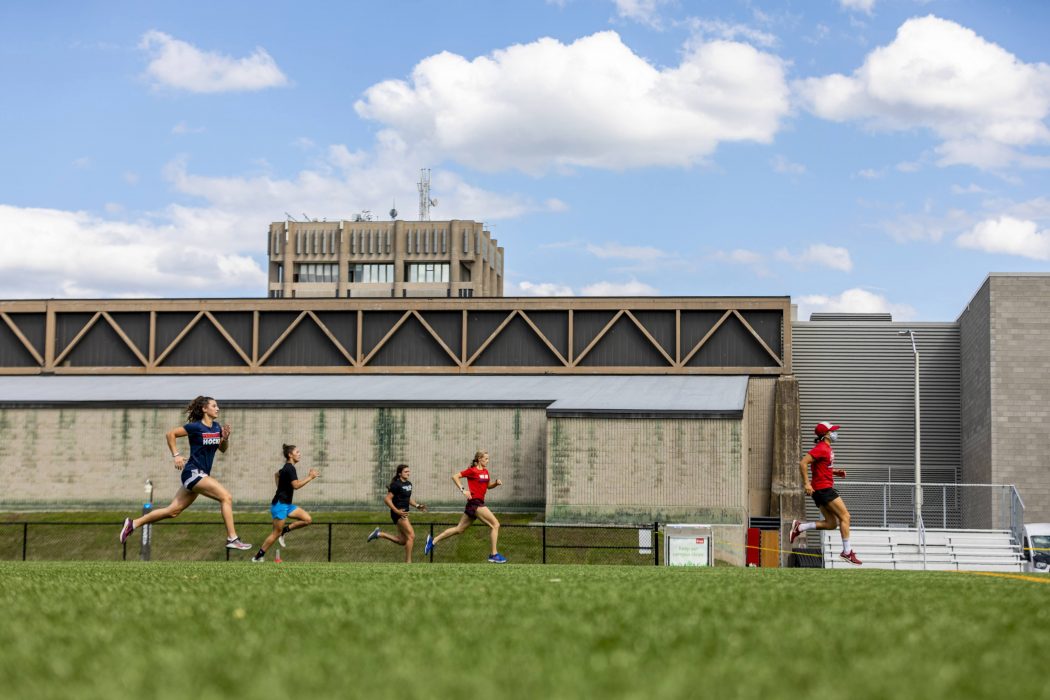 Back home in St. Catharines on March 13, the first domino fell when Brock announced the suspension of in-person classes and exams for the rest of the academic term, triggering a mass exodus from campus.

However, it wasn’t as simple as turning off the lights for Brock Recreation and the Walker Sports Complex caretakers.

“When reflecting on this past year, a highlight for me has been how our full-time and part-time staff responded,” said Karen McAllister-Kenny, Director of Recreation Services. “They’ve been wonderful because we couldn’t just shut right down and walk out.”

They also had the Eleanor Misener Aquatic Centre with water still in the pool to prevent it from turning green with algae. Staff needed to contact people to inform them of programs shutting down, send out refunds and complete various clean-up tasks.

Mired in uncertainty, Brock Sports and Recreation were able to offer hope and progress to its student-athletes as COVID-19 wreaked havoc on sports and leisure.

“The most important takeaway from this past year is how our student-athletes, coaches and staff were able to quickly adapt to an ever-changing environment to make the most out of the situation,” said Emily Allan, Interim Director of Brock Sports. “This break and eventual return will reinvigorate our student-athletes, coaches and staff. It has given us a new perspective on the sports we know and love and why we love them so much.”

BSP coaches were ready to move to an online environment thanks to their investment in the strength and conditioning software, TeamBuildr. It allowed them to send daily workouts and videos to athletes while tracking their progress and compliance throughout the week. They conducted more than 750 virtual sessions over the past year.

Between the mix of virtual and limited in-person training sessions, a trend in the Badgers’ athleticism started to emerge.

“We’ve tracked a significant increase in personal bests in strength, but especially jump heights across all of our sports,” said Steve Lidstone, Associate Director, Sport Performance and Sport Medicine. “This illustrates the amount of force our student-athletes can output when they have recovered. They are weight training with us, but with the travel schedule removed, there’s a variety of ways our athletes have been developing athletically because they aren’t overwhelmed by fatigue or the stressors of travel and competition.” 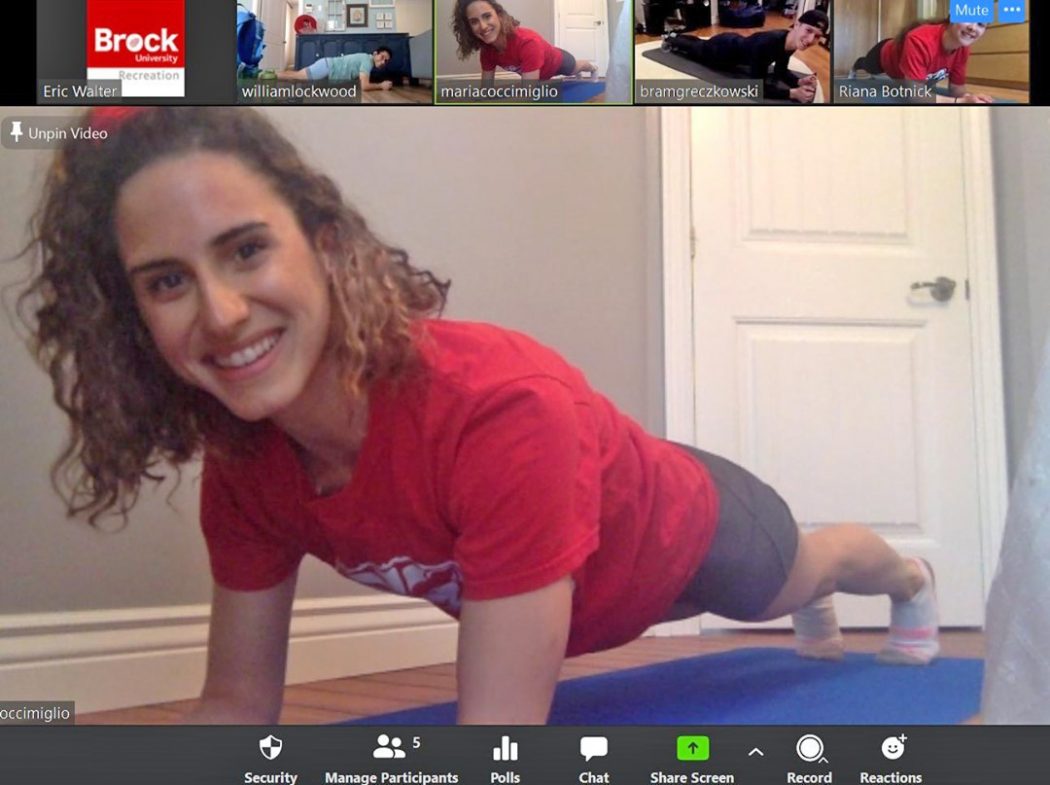 Brock Recreation moved their wide range of fitness classes online, including kickboxing and yoga, to allow students and the community to access live workouts using Zoom.

BSP staff often plan for athletic growth during the summer months, so the glass-half-full viewpoint of the pandemic has been the benefit of extended off-season training.

“You feel for the athletes because they want to be competing, but there have been so many gains in skills and strength development,” added Lidstone.

Brock Sports Medicine’s staff readily shifted to the tele-health world as they conducted more than 1,600 remote monitoring and electronic consultations while also filming techniques they would usually show in person to teach the next generation of on-field emergency professionals.

The department also made the shift to convert everything to electronic documentation for a more eco-friendly operation.

Facilities staff returned to campus earlier than most for physical tasks that needed to be completed as the construction of a new 15,500-square-foot Zone Fitness Centre continued. Staff were willing to pitch in wherever the University required, whether it was cleaning, helping the Office of the Registrar or working the screening desks at entrances.

“What’s been hard about all of this is not being able to continue our in-person responsibilities. While we have virtual fitness programs, online contests or eSports, it’s not the same as being able to come in and do your workout or play intramurals,” said McAllister-Kenny. “The community is itching to get back to do what they do, whether that’s the swim club or people who need their qualifications to be a lifeguard or swim lessons. As we come back gradually, there’s going to be a huge appetite just to be involved in something. Parents who bring children to our programs are going to want to get going again.”

As the snow begins to melt away, spring is bringing new hope.

This month, Niagara Region Public Health announced Brock University would be one of Niagara’s COVID-19 mass immunization clinics once the vaccine supply is available.

On Monday, March 8, the University unveiled the new Zone Fitness Centre, although COVID-19 regulations wouldn’t allow for an in-person celebration. The construction project tripled the size of the original facility. Once the public health guidelines allow it, the Zone will become available to faculty and staff and the wider community.

Brock is slowly coming back to life within the confines of the regional and provincial pandemic safety measures.

As Norris wraps up her now-virtual studies in Therapeutic Recreation, she has used the past year as a time of reflection.

“Lately, I’ve found myself reminiscing on roaming the halls of Brock, being there all day and waiting for practice or workout or most of all, preparing all week for game day on the weekend. That’s something I won’t ever get to experience again,” said Norris. “I don’t feel as though my time at Brock will ever feel ‘complete.’ But I’ve had a lot of time to reflect on all the friendships, memories and experiences these past five years have brought me. I wouldn’t change any of it.”