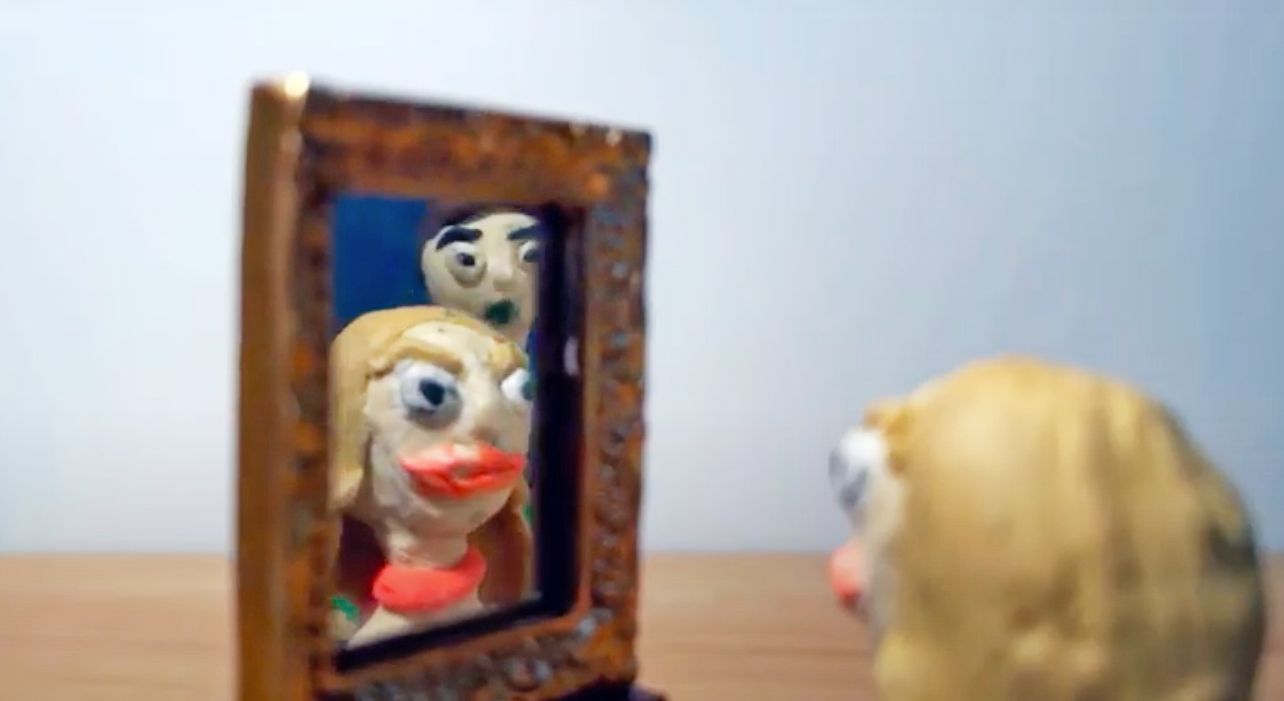 A still from Mackenzie Rockbrune’s film, A Tinder Love Story, which was written, shot in stop-motion animation and edited in just 72 hours for this year’s pandemic-adapted iteration of the 24-Hour Film Festival.

The 24-Hour Film Festival, hosted annually by the CPCF Student Society (CPCFSS) in the Department of Communication, Popular Culture and Film, is back — though it looks a little different this year.

The popular event typically involves student teams being given a secret theme and then a mere 24 hours to write, shoot and edit a film to be submitted by a fixed deadline and showcased at a public festival.

This year, due to ongoing restrictions on in-person gatherings as well as the mental load of students coping with the pandemic, the CPCF Student Society decided to adapt — first and foremost, by making it into a 72-Hour Film Festival. 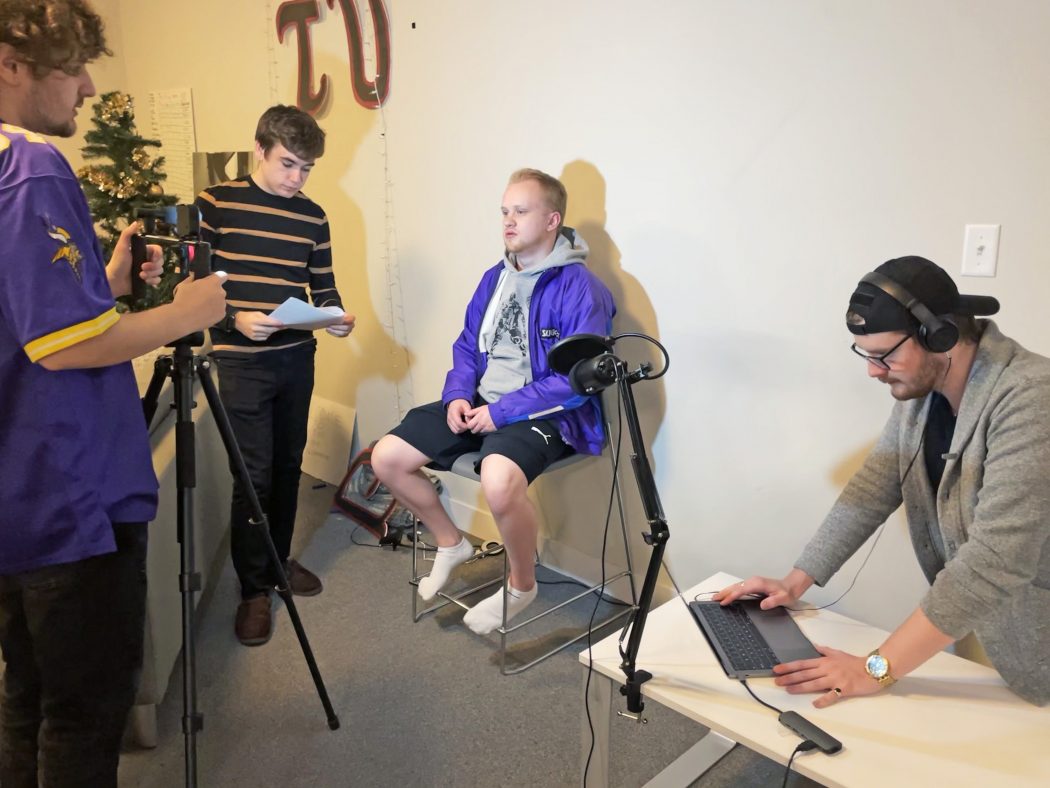 Members of the same household were permitted to collaborate in person for the festival. From left, Brock students Sebastian Andruchovici, Braden Young, Liam Nielsen and Jay Lumsden work on their entry, The 24-Hour Redemption.

“It was really important to us that we provided a bit of a low-stress, more fulfilling challenge to engage students, not to stress them out any more than I feel we already are,” says Lucy Oort, a fourth-year student majoring in Media and Communications and social media manager for the CPCFSS. “I think now more than ever that creative expression and celebration is needed, especially if it means students are able to take a mental break from coursework for a weekend to do something fun like this.”

“The students at Brock are extremely talented and the film festival gives them the space to show off,” says Ethier. “Especially given that school is online and we are not able to socialize as we normally do, this festival can provide students and staff with a break from being online for educational purposes.” 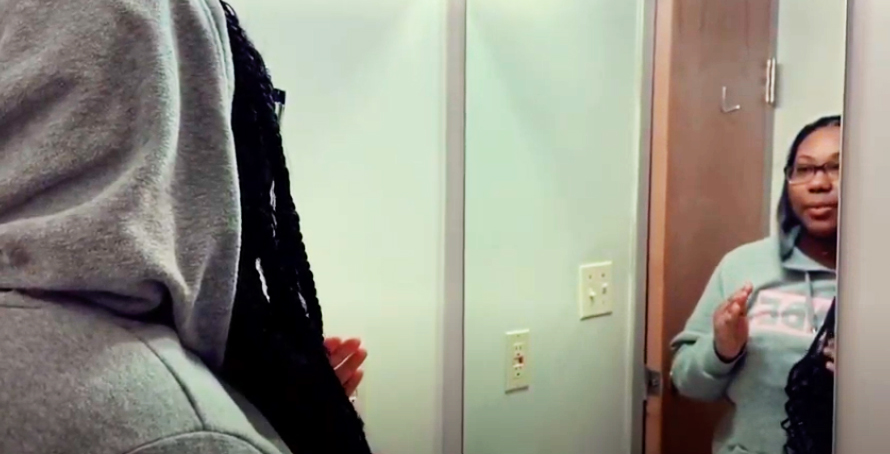 Savannah Gallimore includes a reflection, as per the festival guidelines, in her solo film project, Safe & Sound.

Participating teams received their secret theme of “genre” on the morning of Friday, Feb. 26. They were then given 72 hours to make films two to eight minutes in length around that theme while also acting in compliance with public health restrictions — meaning everyone was required to collaborate remotely unless they are members of the same household.

This limitation didn’t present a challenge for third-year Business Communication student Jay Lumsden and his roommates, who live together in Thorold. Indeed, they had a point to prove with their entry, The 24-Hour Redemption.

“The team wanted to participate as we had a very poor showing in last year’s 24-Hour Film Festival. The 24-Hour Redemption draws on our experience last year, and serves as the team’s redemption story,” says Lumsden. “Now that the film is finished, it’s an extremely rewarding feeling to see not only our own improvement this year but also our story come to life.”

The films, normally screened at a gala event, are now posted online for viewing by the public and the panel of judges made up of Assistant Professors Liz Clarke and Peter Lester along with Teaching Assistant Dan Barnowski. 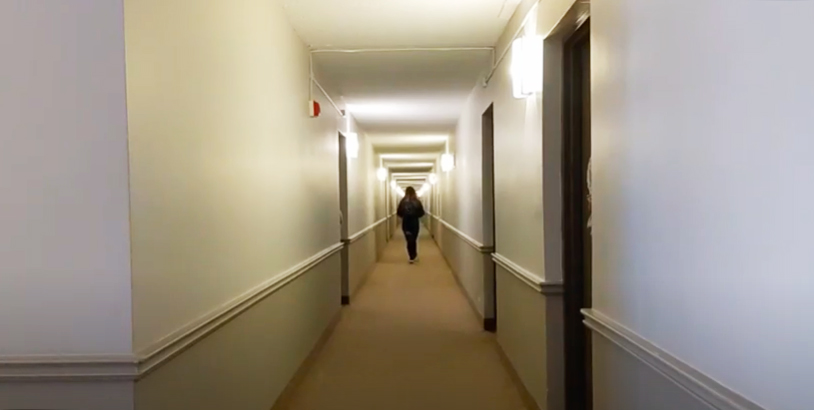 Angel Chang appears in the horror film The One In The Envelope, which she created with roommate Ginger Quaint.

Oort and Ethier say the event wouldn’t be possible without the support and sponsorship of BrockTV, especially Matthew Scott, and the Department of Communication, Popular Culture and Film. They’re also grateful to the rest of the CPCFSS team, which includes Karlyn Babcock, Mat Chamberlain, Colleen Douglas, Marissa Goulart and Sahar Saeidi, and to the festival judges.

Everyone is invited to watch the films and cast their online vote for the Audience Choice Award. Award winners will be announced at a private virtual event at 8 p.m. on Tuesday, March 2 and then shared publicly on Facebook, Twitter and Instagram.