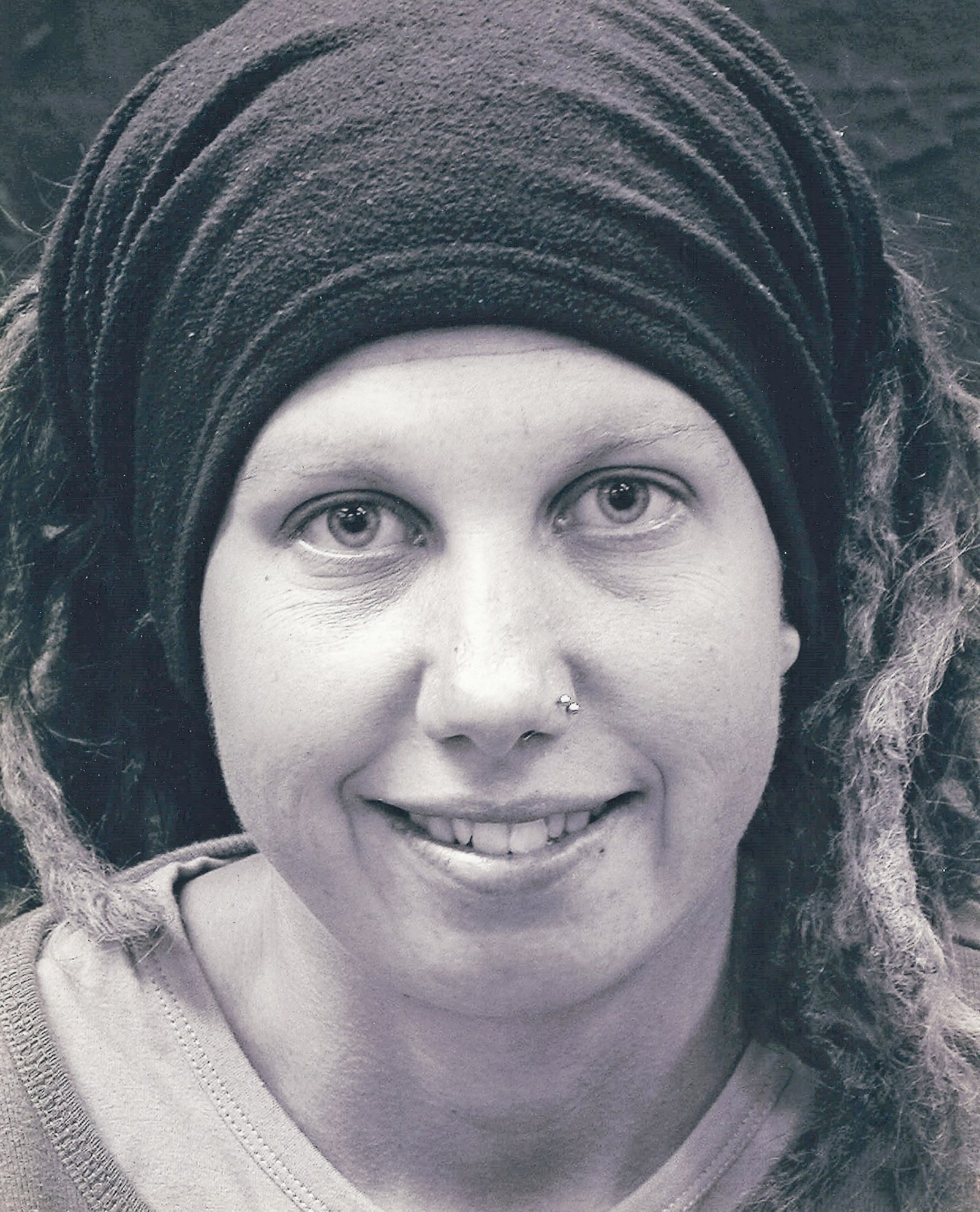 dawn e crysler, celebrated MIWSFPA staff member and Theatre Technician, will be remembered for her creativity and dedication to her work.

The Brock and local arts community is mourning the death of dawn e crysler, a theatre maker and artist who will be greatly missed by all who knew her. Faculty, staff and students at the Marilyn I. Walker School of Fine and Performing Arts (MIWSFPA) were deeply saddened to learn of crysler’s passing earlier this week.

crysler (BA ’00), who preferred her name referred to in all lowercase, had been a Theatre Technician at Brock’s MIWSFPA since 2018. Working in the Department of Dramatic Arts (DART), the multi-talented artist played a pivotal role working with students and faculty to bring performances to life through her work as technician and scenic painter.

“The entire DART community is shocked and saddened at the departure of this sensitive, observant and generous soul. As a former student of the program, dawn brought her many talents and insights to a wide range of theatrical activity at Brock and beyond,” says David Fancy, Professor and Chair of DART.

crysler also worked as a theatre technician at the Shaw Festival and Carousel Players, and in Toronto on various film, TV and theatre projects. Most recently, she had been painting the Klingon ship on the set of Star Trek: Strange New Worlds (a spinoff series currently being filmed in Toronto).

A Brock graduate, crysler conferred on June 9, 2000 with a Bachelor of Arts in Dramatic Literature and Theatre.

“dawn was one of the most highly motivated students I had in my 20 years at Brock, working with distinction in almost every aspect of our program,” he says.

Feldman also fondly recalls joining crysler and other former students in starting a St. Catharines-based fringe theatre group known as Stray Theatre in 2003. In addition to building and painting sets, crysler was a gifted actor, he says.

“dawn played an astonishingly wide range of roles in drama and comedy, all beautifully, movingly and totally believably.

“All of us with whom she worked will remember dawn’s sunny personality, her always positive view of life, her gift for friendship, the enthusiasm she brought to everything she worked on, and her sense of wonder. ‘Awesome!’ must have been her favourite word,” Feldman says. “Altogether, dawn was one of the most remarkable young women I’ve known in the theatre.”

“When we hired dawn in 2018, it was as if she was coming home to the MIWSFPA. She was a celebrated member of the arts community and Brock graduate contributing to local arts and culture — it was so very right to have dawn join us here at the School,” he says.

In addition to being a valued staff member and friend of Brock, crysler was a dedicated theatre artist with a strong presence in the Niagara arts scene. Born and raised on a farm in Pelham, crysler explored her roots though her artistry. She was a published playwright. Her play White Crow, which ran in November of 2012 mounted by Essential Collective Theatre, chronicled a family facing adversity on a Pelham farm.

In 2013, crysler was nominated for the Emerging Artist Award for the eighth annual St. Catharines Arts Awards. She brought creativity and energy to cultural initiatives, such as In the Soil Arts Festival, where she held an interactive workshop entitled “Play!” that involved massive checker pieces, a giant Jenga set and oversized “pick-up sticks.”

MIWSFPA colleagues remember crysler for her energetic attitude and sense of play.

Gyllian Raby, Associate Professor of Dramatic Arts, reflects on crysler’s bright personality and her professional talent and work ethic. Raby, along with other DART faculty and staff, were working closely with crysler on the spring Mainstage production.

“Across the community she was known and loved for her infectious energy,” Raby says of crysler. “She was a beam of light, a roller-derby queen, a published playwright, cabaret performer, theatre-technician and maker-builder extraordinaire. She believed in art and was endlessly creative.”

A space on the MIWSFPA website memorializing crysler will be created in the coming weeks, where colleagues, friends and family will be invited to share their memories.

The flags in front of Brock’s Schmon Tower will be lowered to half-mast on Friday, March 26 to commemorate crysler’s passing.