History on ice: How Michael Nicholson became a hockey trailblazer 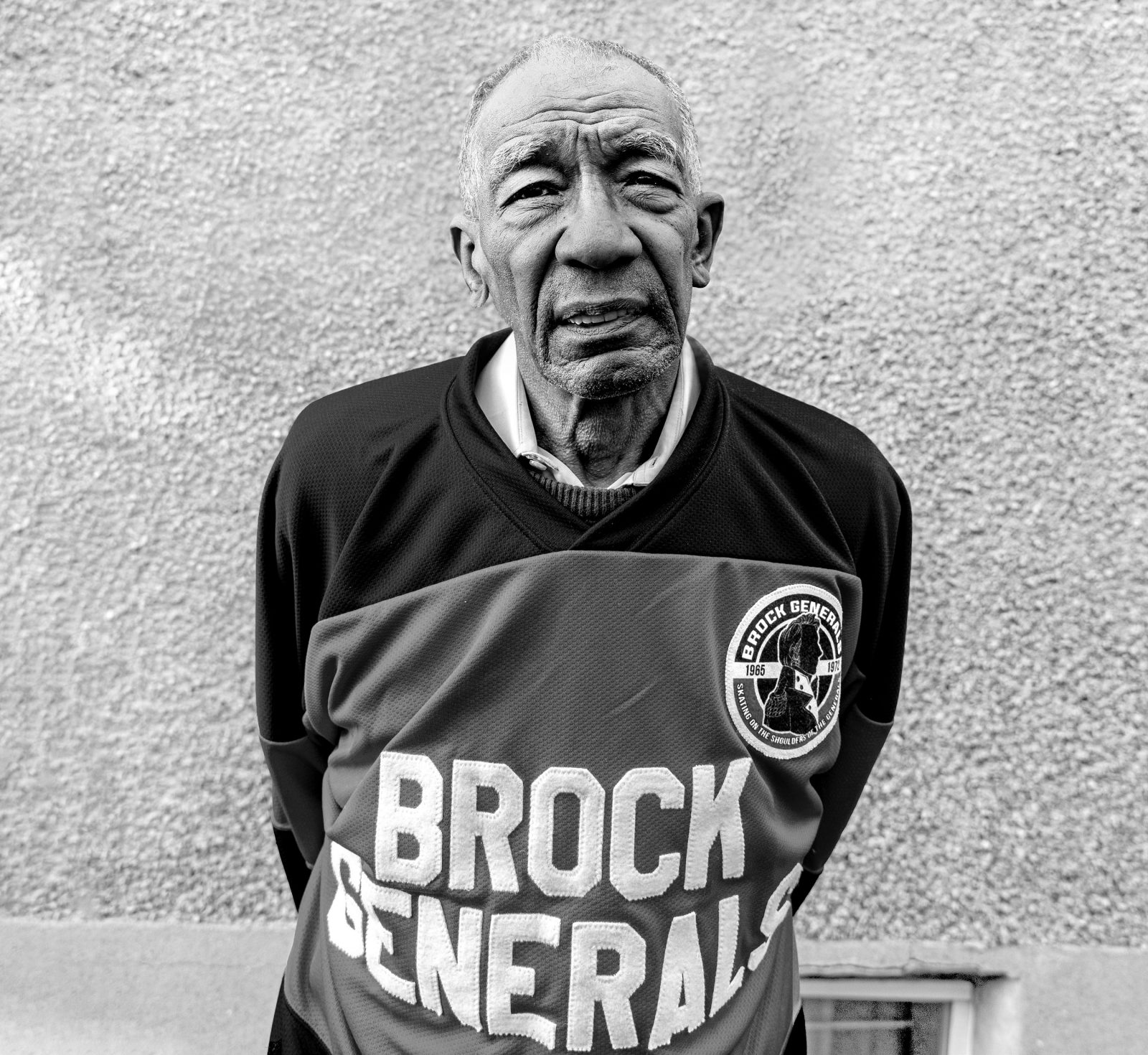 Michael Nicholson (BA '70) is believed to have been the first Black captain of a Canadian university hockey team.

When Michael Nicholson (BA ’70) was named captain of what was then known as the Brock Generals men’s hockey team in the fall of 1968, his teammate Michael Rohatynsky (BA ’71) thought little other than it was a deserving honour.

“At the time when Mike was named captain, we didn’t see it as a big deal,” says Rohatynsky. “No question Mike was our leader and he had every right to be our captain.”

The fact Nicholson was Black was never thought of as anything notable. He was just one of the guys and a talented hockey player known for his playmaking and skating abilities. 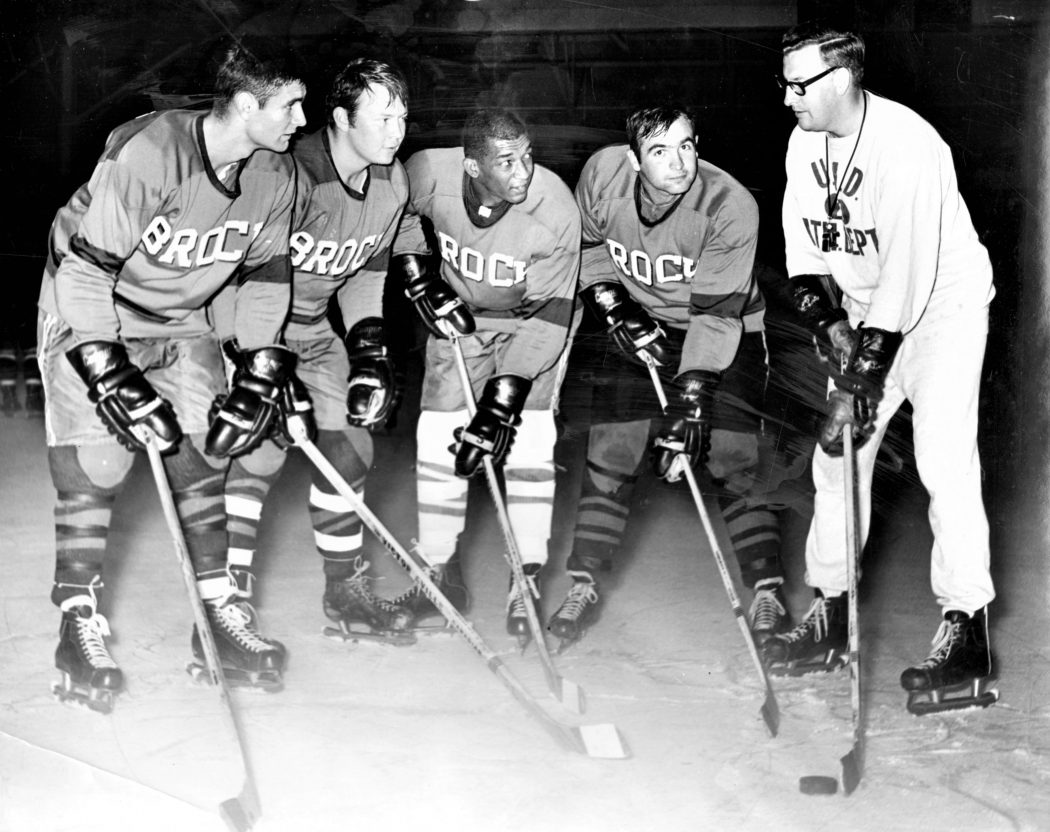 “Mike was named captain 10 years after Willie O’Ree broke the colour barrier in the NHL with the Boston Bruins,” Rohatynsky says. “It was never a controversial topic among the team.”

But looking back half a century later, in an era of increased awareness of issues around equality and diversity, Rohatynsky started to realize that Nicholson was more than just a deserving captain. He was a pioneer.

After discussing the issue with former Brock men’s hockey coach Murray Nystrom in 2016, Rohatynsky says everything he has uncovered points to Nicholson being the first Black captain of a Canadian university hockey team.

While U SPORTS hasn’t been able to fully verify the claim, the governing body for Canadian university sport points out that other early Black university hockey leaders of record include Bob Beaulieu, who served as one of two alternate captains of the Alberta Golden Bears in 1973 and Darren Lowe, the first Black captain at the University of Toronto in the 1980s.

Rohatynsky says it’s critical for society to recognize the contributions of Black Canadians.

“We should be asking the question ‘who were the first Black captains in both men’s and women’s Canadian varsity sports?’” he says. “It’s important we recognize Mike’s accomplishment and his contribution to Brock and St. Catharines as a Black hockey player.”

Nicholson isn’t consumed with the possible title of being the country’s first Black hockey captain, but rather more concerned with how the Black Lives Matter movement has highlighted a need for a harmony with Black Canadians, much like how the country is going through a reconciliation with First Nations, Inuit and Métis people.

Nicholson is encouraged by the formation of the Hockey Diversity Alliance, which consists of current and former NHL players and was created to speak out against racism and racial injustice shortly after George Floyd was killed in May 2020 while in police custody in Minneapolis, Minn.

What’s happening today isn’t unlike the state of the world when Nicholson was named captain in November 1968.

That year, the world was disturbed by the assassinations of American civil rights heroes Dr. Martin Luther King in April and Robert F. Kennedy in June. 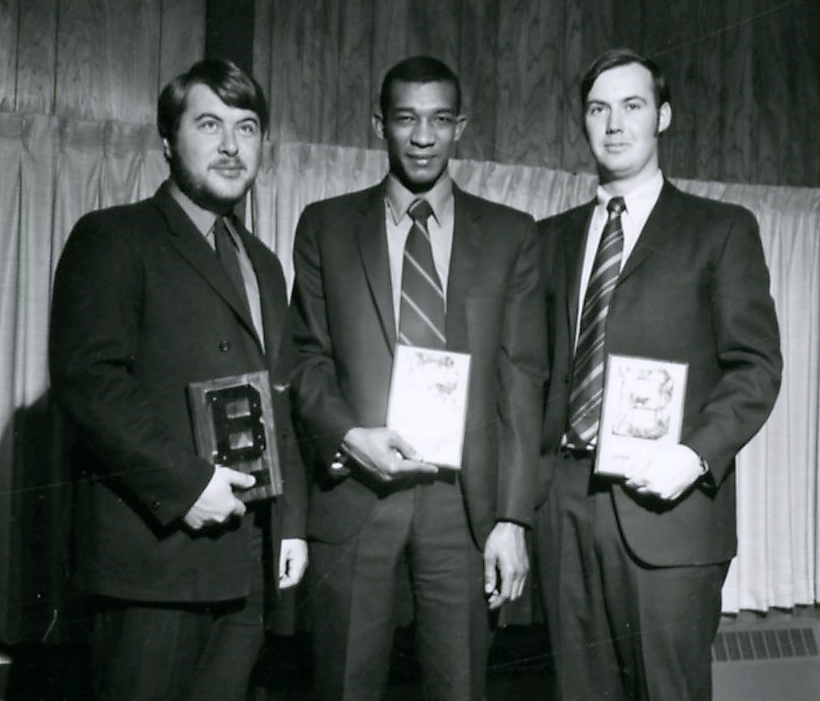 Black athletes were making headlines as boxer Muhammad Ali opposed the Vietnam War and Kareem Abdul-Jabbar boycotted the 1968 Olympics in Mexico City because of the race riots happening in the U.S.

“Making Mike captain was especially meaningful considering what was happening during those times,” says Brock’s first men’s hockey coach, Ed Davis. “A Black hockey player with a captain’s ‘C’ on his chest was unheard of, but it was a natural decision to make him captain because of the quality of man he was. He was a gentleman on and off the ice. We were proud that he was the face of the team.”

Davis thought Nicholson was captain material from the moment he met him — at a time when Brock’s hockey program was just starting.

University founding President, James A. Gibson, tasked Davis to start a men’s hockey program on a budget of $1,000. The Generals held their first training camp in the fall of 1966.

“Mike was one of 30 players trying out for the team at our first camp,” says Davis. “He came out on the ice and I thought he was one of the most captivating players I’d ever seen. He was this smooth-skating forward that moved around the ice with ease. I knew right then and there he was going to be on my first line.”

The following year, Davis and Arnie Lowenberger negotiated for Brock, a school of only 760 students, to compete in the Ontario Universities Athletic Association (OUAA) against powerhouse schools such as Toronto and Western.

“It wasn’t easy for Mike as captain. He was our leader during those early, hard days for our program,” adds Davis. “He led by example like being the first player to arrive at Thorold arena for our 6 a.m. practice time. He was also thrust into the leadership role after we lost our first captain Bill Walker to a season-ending injury.”

His teammates easily embraced Nicholson as their leader and voted him the team’s Most Valuable Player during the 1967-68 season.

Long before coming to Brock, Nicholson’s talent as an athlete was known across the Niagara region. It was noteworthy when the six-foot, 165-pound forward enrolled at the University in 1966.

“Of the first-year students, probably the best known in local hockey circles is Mike Nicholson,” stated a Brock recruit press release at the time. “He played his minor hockey in St. Catharines and had some experience with the Thorold Jaycees of the Niagara District Junior B before coming to Brock.”

Nicholson was one of the few St. Catharines-born players on the team including alternate captain Bruce Wormald (BA ’70) and his good friend Dick Overholt (BA ’70, MA ’78).

Overholt recalls Nicholson’s do-it-all approach to the game with playmaking passes and a willingness to forecheck and backcheck. 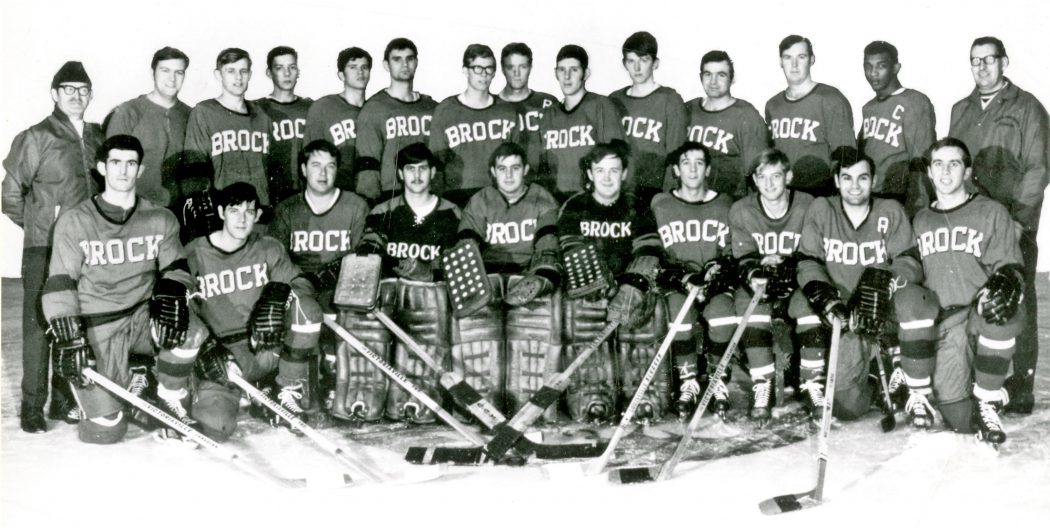 “Mike was one of the better players in the area at the time,” says Overholt, who grew up playing midget-level hockey in the region with Nicholson. “He was so smooth that he didn’t look like he was working hard, yet he got everything done. Mike was a very smart player.”

In the classroom, Nicholson achieved high marks. He received a scholarship awarded for outstanding academic achievement during the 1966-67 year.

“Those were good years at Brock,” says Nicholson. “Athletically, it was no comparison to the facilities that you’ve got now. There was a little field house at the top of the hill near the tower that served as the Athletic Department. Now, they have more people contributing to athletics than we could ever dream of.”

To say Nicholson, who grew up in the ethnically-diverse Facer Street area of St. Catharines, comes from an athletic family is an understatement.

The Nicholsons played a large role in the 1937 all-Black hockey team, the St. Catharines Orioles, who competed in the Niagara District Hockey League against white teams.

Many members of the team were descendants of Adam Nicholson, a prominent member of the Black community in St. Catharines who arrived in Canada after escaping slavery in the 1850s.

The Orioles were captained by Nicholson’s father Hope, who made a living in excavation as a shovel operator and hoisting engineer.

His grandfather on his mother Norma’s side was the legendary Norman ‘Pinky’ Lewis, who was a trainer for the McMaster Marauders and CFL’s Hamilton Tiger-Cats. Lewis also coached hockey and was named Hamilton’s Citizen of the Year in 1971. One of Hamilton’s recreation centres is named after him.

“Hockey equipment wasn’t expensive back then, but a good pair of skates were,” says Nicholson. “My grandfather always made sure I had access to good equipment like cast-offs from the NHL or CFL. I always had unbelievably good equipment.” 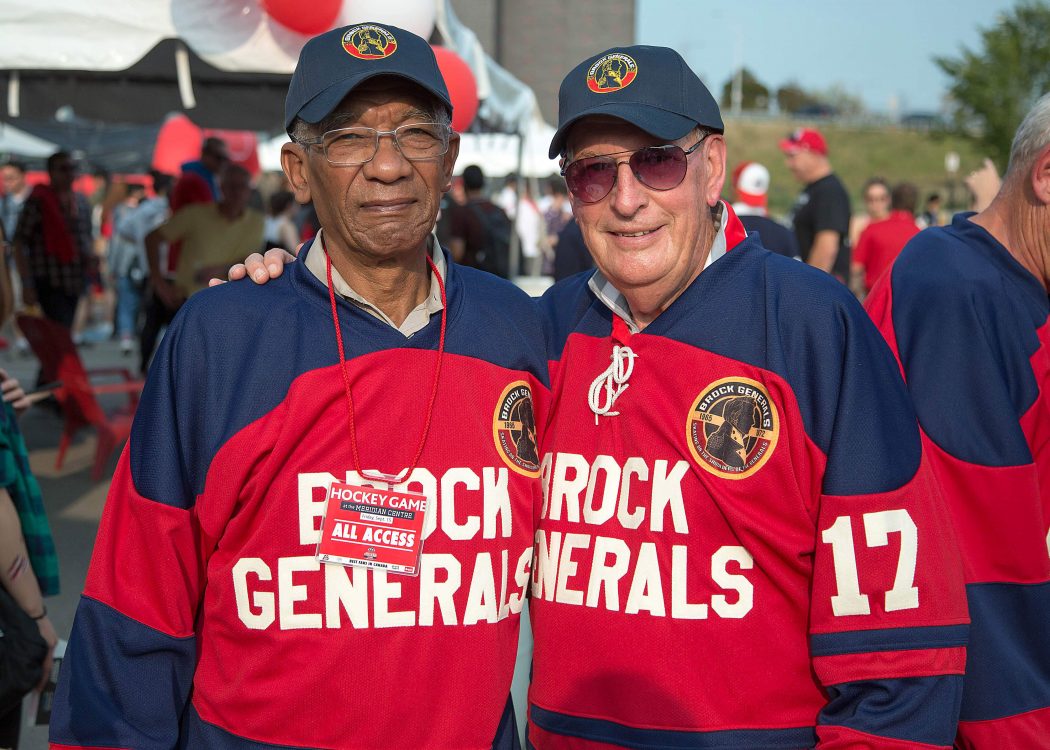 Nicholson is also the godson of lawyer Lincoln Alexander, who was the first Black Canadian member of Parliament, Cabinet minister and Lieutenant Governor of Ontario.

“I think all of these people played a role in the qualities that made Mike a great captain and person,” says Overholt. “He was a quietly-intense leader. You wouldn’t hear him yell or scream at anyone in the dressing room, but rather he would say something meaningful to get the point across that we had a job to accomplish.”

Nicholson says his time at Brock and playing for the Generals set the foundation for his future.

After he graduated at age 23, Nicholson worked at Stelco Steel in Hamilton before receiving an offer to play hockey in Erie, Pa., with the Erie Lions from 1970-73.

He made an impact in his first year as one of the club’s top scorers with 78 points in 41 games.

Nicholson returned to Canada after his work permit expired and enrolled in the Ontario Institute for Studies in Education of the University of Toronto. He would go on to start a family in Toronto, where he raised his children Laura, Pamela and Martin. He recently retired from a 40-year career as an English teacher in the Toronto District School Board.

Nicholson continues to give back to Brock through donations or participating in University events, including lacing up for alumni hockey games.

The Brock Badgers, which the Generals became known as in the early 1970s, now honour Nicholson with a Sportsmanship Award in his name given out annually.