PhD student to receive first degree of its kind in Canada 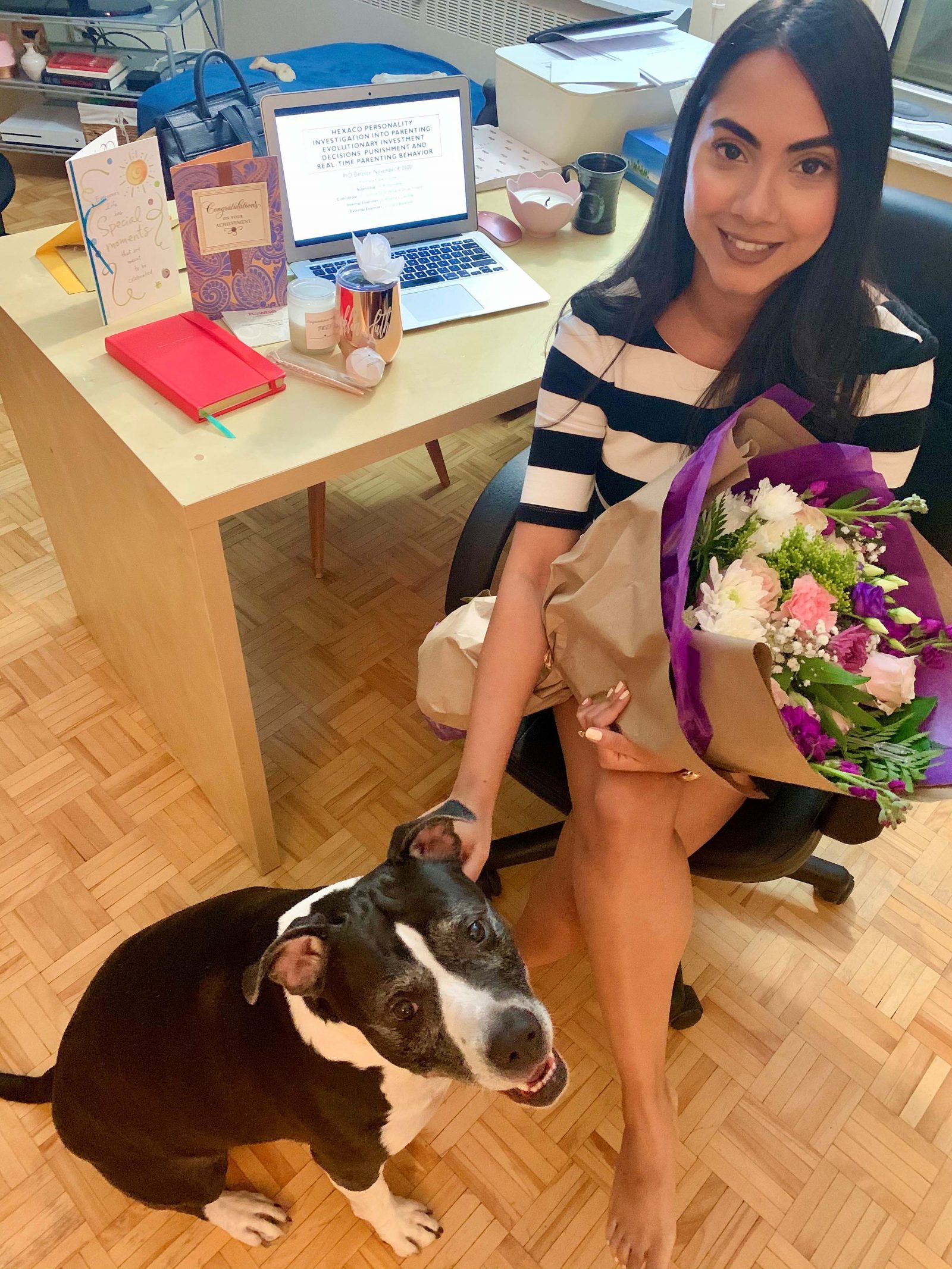 Prarthana Franklin-Luther with her dog, Layla, after successfully defending her dissertation. She is the first student in Canada to complete a PhD in Child and Youth Studies.

When the Child and Youth Studies PhD program launched at Brock in 2016, Tony Volk, Chair of the development committee for the program, said it was “the first doctoral program in Canada exploring children and youth studies from multi- and transdisciplinary perspectives.”

She began her academic journey with studies in Psychology, but became interested in parenting research, and ultimately chose Brock as the destination to complete her PhD.

Franklin-Luther studied under Volk and completed her dissertation on how personality traits can influence parenting behaviour and decisions. Her research looked to explain the variance in parents’ decision making and behaviours towards children, using the HEXACO Personality Model.

To complete her research, Franklin-Luther undertook three studies, which all began with parents taking the HEXACO test to determine which personality traits were most prevalent. The first study then examined parental investment using images of infants as stimuli to motivate parental engagement. The second compared personality traits with parents’ reactions and punishment to video vignettes of misbehaving children, based on the child’s age and intentionality. The third study observed the associations between personality and real-time parenting behaviour on a playground.

The findings from all studies showed the parents who scored higher on HEXACO’s Emotionality, which describes feeling attached toward others, were more likely to display engaged and involved parenting.

Those who scored lower levels in the category of Emotionality (feeling less empathy toward others) and lower Agreeableness, which describes quick to anger and being more reactive, were shown to correlate to the parents who used severe punishment for a child’s misbehaviour, regardless of whether it was a younger or older child, and regardless of whether it was an accidental or intentional misbehaviour (in the case of lower Agreeableness).

“Very few studies have tested the HEXACO model in a parenting context, and our data suggest the HEXACO may be an effective tool for better understanding different inherent parenting motivations,” she says. “If we can understand what types of personalities contribute to more involved and/or harsh parenting, we may be able to target parenting interventions to those traits and produce more effective parenting and parent-child outcomes.”

While Franklin-Luther’s PhD studies are now behind her, her path was not without challenges. Midway through her degree, she was diagnosed with a spinal tumour that required her to have emergency surgery and take a five-month medical leave of absence from the program, during which she had to learn to walk again. She then had to finish the final stage of her studies during the COVID-19 global pandemic.

“I had my struggles along the way, but Dr. Volk and the CHYS department were very supportive of me,” she says.

Now undertaking a Post-Doctoral Fellowship at McMaster University, Franklin-Luther is excited to use the knowledge she gained during her PhD. She will spend the next two to three years in the Department of Obstetrics and Gynecology studying how to better support the mental health needs for parents of pre-term infants.

“I am excited to continue my transdisciplinary research, combining social science approaches and knowledge with the health sciences/perinatal field,” she says.

“That Prarthana was my PhD student only makes that even more satisfying. What’s more, the entire first cohort is doing extremely well and they all highlight the co-operative, multidisciplinary and transdisciplinary approaches that served as the foundation of the PhD program,” he said.