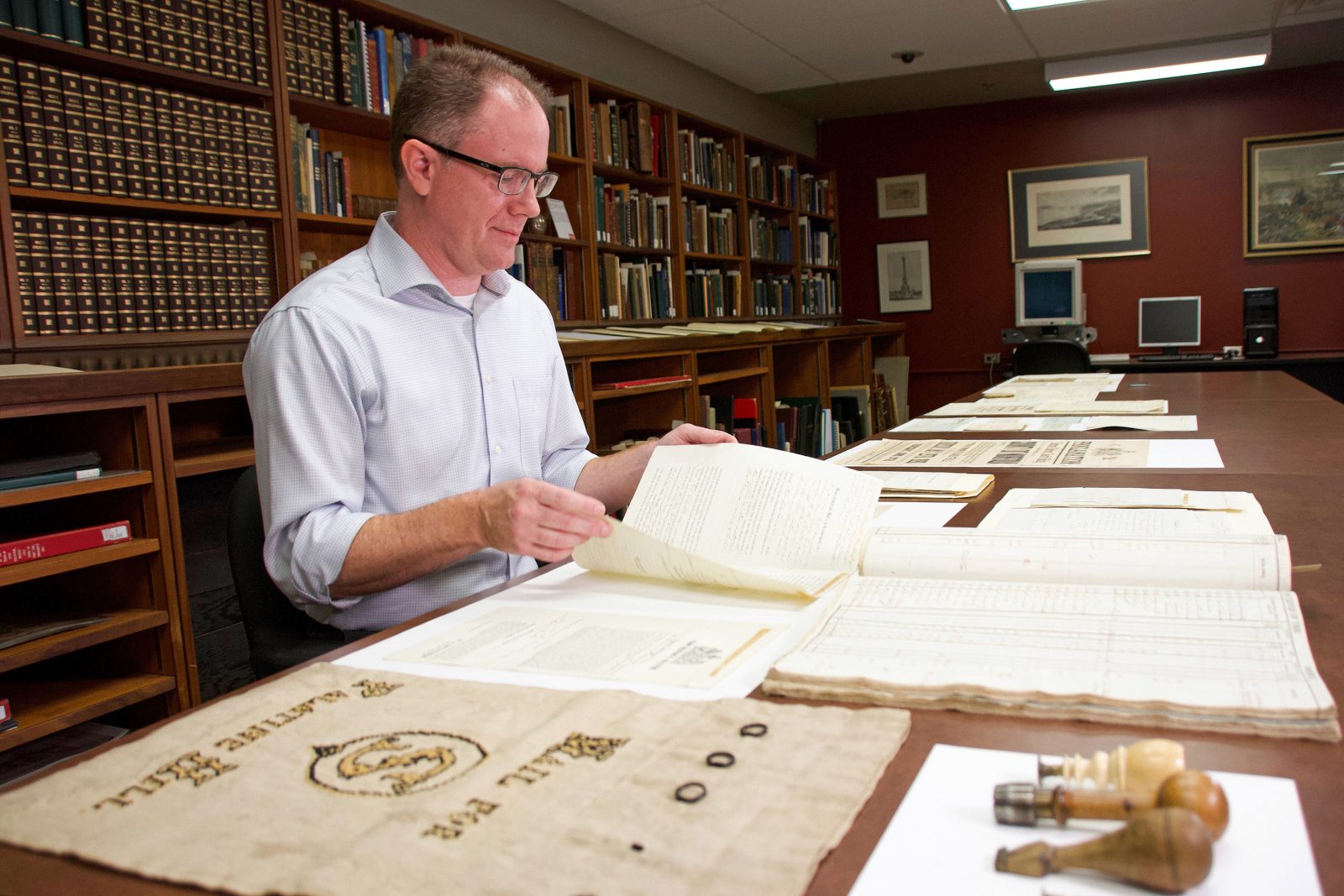 David Sharron, Head of Brock’s Archives and Special Collections, looks over historical documents from the Alexander Hamilton collection recently donated to the University.

A generous donation has placed a nationally significant collection filled with Canadian history in the hands of Brock University.

Brock’s Archives and Special Collections is now home to the Alexander Hamilton collection, a compilation of documents detailing the growth of the Canadian postal system and profiling the life of Hamilton, a prominent businessman and influential community leader who played a large role in making Niagara — and Canada — what it is today.

Valued at just under $350,000, the collection includes about 2,500 pieces and has been recognized as culturally significant by the Department of Canadian Heritage. It was donated recently to Brock on behalf of the estate of Robert Band by relatives Christopher and Eric Taylor, Julia MacDonald and Martin Woodruff Band. 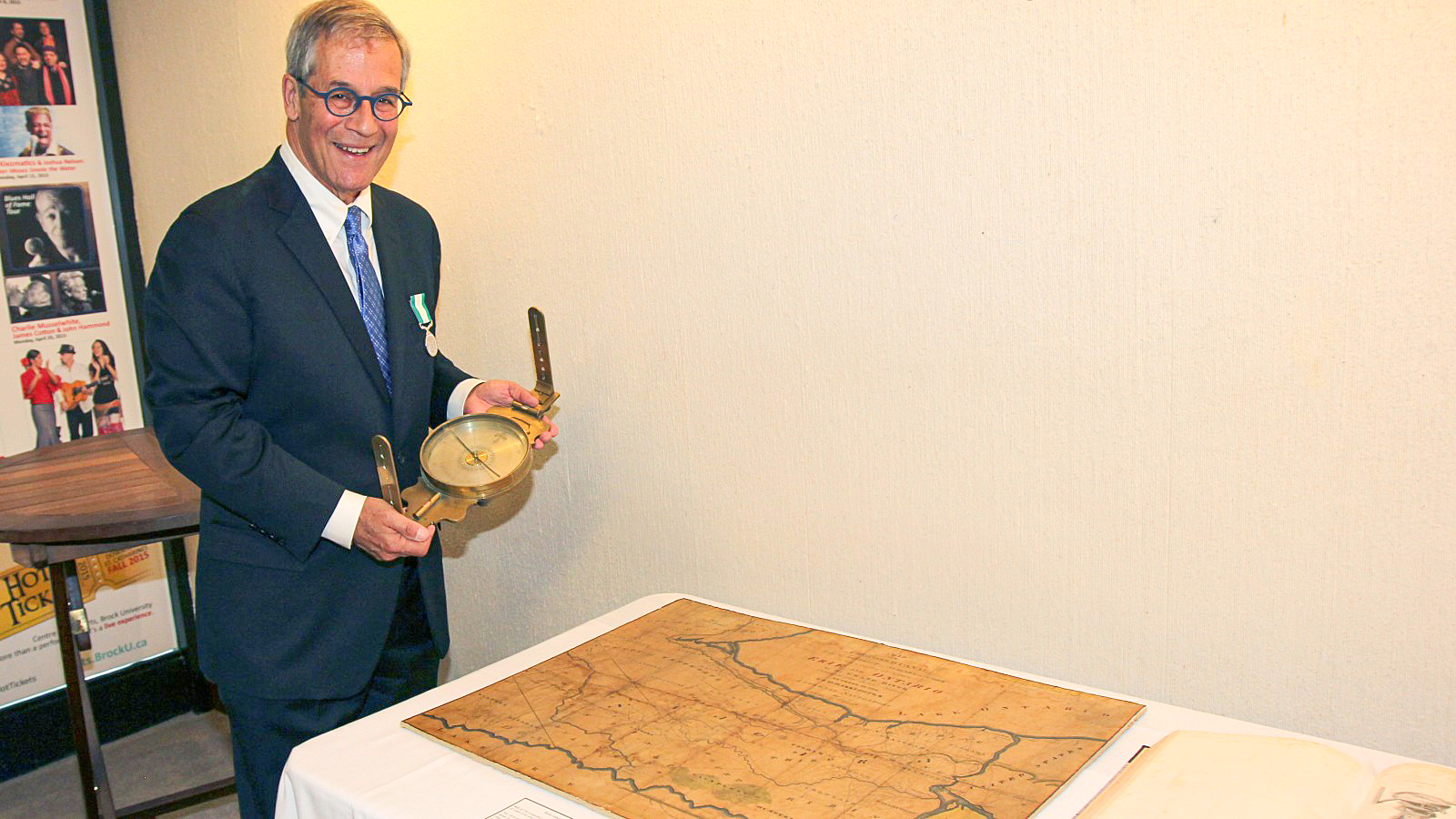 Christopher Taylor, one of four family members who have gifted two collections to Brock, is pictured during the donation of the Woodruff Family collection in 2015.

Upon discovering the collection amongst his late uncle’s belongings, Christopher Taylor immediately knew he wanted to share his findings with the University, to which his family has previously made historically significant contributions.

“When I discovered what the material was, even my little knowledge of history told me that it was important,” Taylor said. “I knew I had to get it to the right place, where the community at large could have access.”

Brock University is proudly celebrating this invaluable gift in conjunction with National Philanthropy Day on Sunday, Nov. 15. Brock annually marks this occasion by reflecting on and thanking the alumni, faculty, staff and donors who provide the support necessary for the institution to thrive.

The Alexander Hamilton collection is a prime example of a non-monetary gift that will have a lasting impact on the University, its students and researchers, said Sonia Dupte, Brock’s Director, Development and Stewardship.

“While generous financial support is important for a university, gifts of this nature enable us to preserve history and add to the cultural wealth of the institution and the region,” she said. “Thoughtful gifts to Brock University can come in all shapes and sizes and we hope people feel inspired to continue to support Brock.

“We’re grateful to the family of Robert Band for preserving this valuable Canadian history and for their continued support of Brock University throughout the years.” 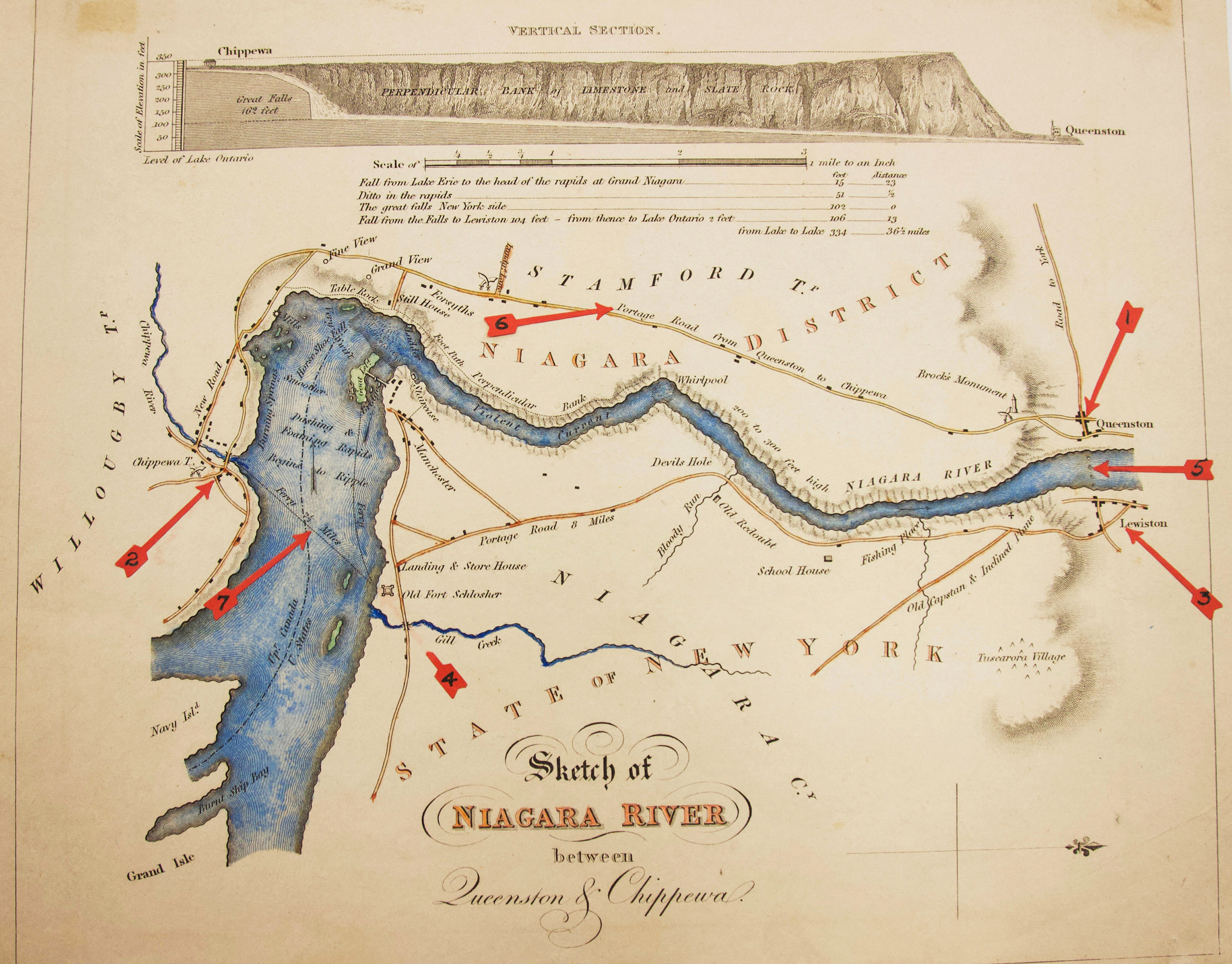 A hand-drawn sketch of the Niagara River is among about 2,500 documents included in the collection.

Known warmly to many as ‘Uncle Bob,’ Robert Band passed away in September 2013, leaving behind a spectacular collection of historically significant artifacts. Among those artifacts were the Hamilton collection donated recently, as well as the Woodruff Family collection, which Taylor and his family donated on behalf of his uncle’s estate in 2015. That collection included 150 years of records documenting the prominent Woodruff family’s influence in Niagara and also received a federal cultural property certification.

The Hamilton collection was purchased for 17 cents at a garage sale in the 1940s by Band’s father Percy, who was also an avid collector.

With a passion for history that runs deep, Band’s family made both donations to the University with the intention of seeing the material shared with the Brock and wider community. Being able to provide access to that history and potentially spark further research holds great meaning, Taylor said.

David Sharron, Brock’s Head of Archives and Special Collections, describes the Alexander Hamilton donation as a “flagship collection” for the University that is expected to inspire countless research projects.

A “mover and shaker” in his time, Hamilton had a “finger in every little bit of history that happened around here,” Sharron said. “He was the sheriff. He was the postmaster. He was a judge. He worked in the fur trade business for a little while and was in the War of 1812.

“During those years, you couldn’t do anything without Alexander Hamilton’s influence. He got things done and I think the Niagara area benefits from his legacy.”

While Hamilton’s life has been documented “bit by bit” through various historical pieces held by different organizations, there has never been a collection as comprehensive as the one now housed at Brock, Sharron said.

“This is an absolute treasure in a sense that anyone who wants to study Hamilton would have had to go to many different repositories to pull this information together,” he said. “For generations now with the Band family, these papers have been kept together and have created a one-stop shop.”

Detailing the history of Niagara predominantly in the 1810s through the 1830s, the material also offers a look into the early Canadian postal system, showcasing how rates were chosen, how international mail worked between Canada and the United States, and how the growth of the system influenced the growth of Canada.

“The collection tells a story about us as Canadians,” Sharron said, adding the certification “puts us in a good position to steward this material and be a part of the greater understanding of our history.

“This will draw attention, but ultimately it’s really about the students, researchers and community members who can come in and use these materials.”

Taylor said his family loves seeing people “captivated” by the pieces contained within the collection. They have been impressed, he added, by both physical and digital displays Brock has put together with their past donation, and are excited to see the same happen with the latest addition.

“There’s no better place for the history as recorded in these documents,” Taylor said. “Brock University has been extraordinarily good to us as beneficiaries and to the name of Robert Band.”

Examples of some of the materials found in the collection are available here.