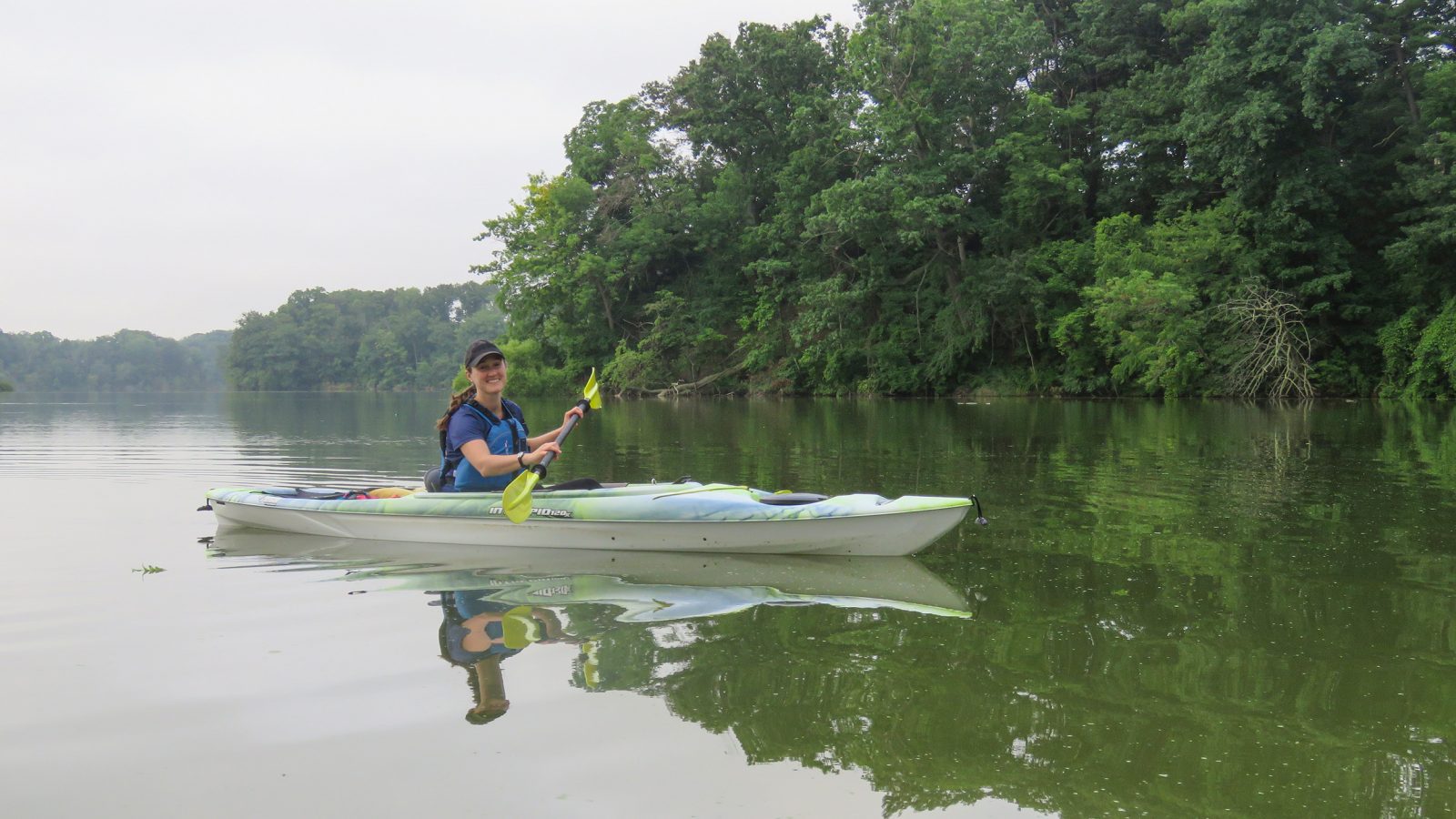 Meredith Caspell travelled by kayak to observe the coastlines she studied in detail for her thesis and award-winning StoryMap research. (Photo by Brian Jaworsky)

The shores of Lake Ontario have a story to tell, and Meredith Caspell wants to share it with as many people as she can.

Using historical maps, striking photography and clear, concise commentary to show where and how the coast has changed since 1934, Caspell, a Master of Sustainability student, has created “If Coastlines Could Talk: A Story of Lincoln, ON,” an interactive ArcGIS StoryMap that was recently awarded the 2020 Esri Canada scholarship for Brock University.

“Visualizing change is a tool that can empower communities to combat the impacts of a changing world,” says Caspell.

The online project, based on Caspell’s thesis research in the Sustainability Science and Society graduate program, also explains the many factors affecting the alterations of the coastline, from storms to construction projects, and suggests what might be done to stabilize vulnerable areas.

Part of the MEOPAR-Lincoln Community Sustainability Project, “If Coastlines Could Talk” presents several dramatic animations to highlight specific areas that have seen some drastic changes, sometimes in a very short timeframe. 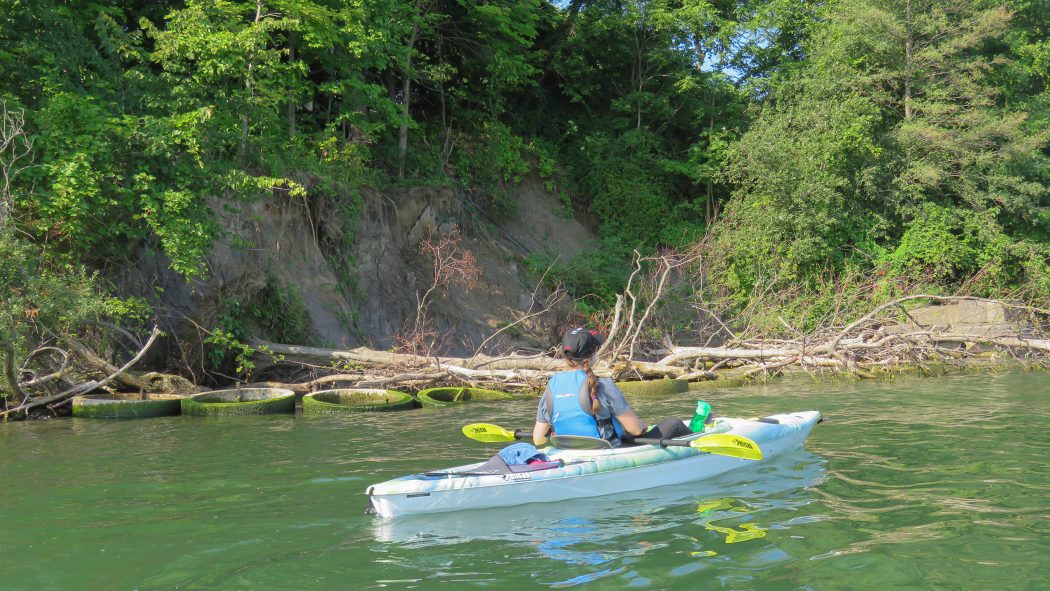 Meredith Caspell travelled by kayak to observe the coastlines she studied in detail for her thesis and award-winning StoryMap research. (Photo by Brian Jaworsky)

“Coastlines are dynamic, meaning they are meant and expected to move,” Caspell says. But she also says that high levels of erosion are evident in stretches of the Lincoln coastline that aren’t as naturally susceptible to erosion, which is cause for concern.

“You can’t find many places around the Great Lakes that aren’t influenced by the presence of humans, and when humans change the land — stripping for agriculture or building roads close to shore — you increase the likelihood of erosion,” she says. “And the increased frequency of storm events due to climate change is making areas more vulnerable.”

Caspell’s research suggests there are viable solutions for places where, as she puts it, “coastline retreat is not an option.” These include co-operative management of shoreline protection and shoreline naturalization through increased vegetation, though she notes that both require collaborative effort.

“The goal of our project is to bring the community together to first identify any sector-specific challenges regarding climate change and second, to co-construct climate change adaptation strategies to move forward,” says Caspell. “Our research team is hoping to create the space needed to bring as many voices to the table as required to make sure that Lincoln can increase its resilience to changing conditions.”

Caspell also hopes that her StoryMap will help in the discussion with shoreline residents and town staff, noting that “visuals have been shown to be an effective tool for increasing knowledge and overcoming barriers to action.”

Climate change in coastal communities is a “major challenge” and it is “important to determine whether it is the only factor influencing the way the coastline can be modified,” says Liette Vasseur, who holds the UNESCO Chair on Community Sustainability at Brock and also supervised Caspell’s thesis. “Meredith’s work has been one of the central pieces for understanding changes of the coastline in the Town of Lincoln, and the StoryMap is a wonderful way to translate the information so that citizens can explore how the changes occurred over time and why.”

Caspell, who holds an undergraduate degree in Environmental Sciences, came to Brock to pursue her master’s in Sustainability after reaching out to Vasseur, who was launching the MEOPAR-Lincoln project that same year.

“I wanted to integrate my passion for sustainability and ecosystem-based approaches and do my master’s on a project that was bigger than my own,” says Caspell. “I am excited that my thesis work will directly feed into the larger project.”

Caspell was elated to learn she had received the Esri scholarship, which includes a cash award, Esri software, books, access to e-learning resources through the Esri training site, Esri Canada instructor-led training and a complimentary registration for one of the Esri Canada User Conferences.

“The StoryMap was an additional piece I created on top of my thesis requirements because knowledge mobilization is very important to me,” says Caspell. “Receiving the Esri scholarship validated for me that I produced something that matters and can make a difference.”

Marilyne Jollineau, Graduate Program Director in Sustainability Science and Society, describes Caspell as an “excellent candidate for the Esri Canada scholarship,” which is intended to support and acknowledge dedicated and high-achieving graduate and undergraduate students for excellence in the application and use of Esri’s GIS software products in their coursework and research endeavours.

“On behalf of faculty, staff and students involved in the Master of Sustainability graduate program, I want to congratulate Meredith on this well-deserved award, and to acknowledge Esri Canada for their ongoing and generous support of Brock students over the past decade,” she says.

Sharon Janzen, a member of the adjudication committee that selected Caspell’s project for the scholarship, says it was “evident that Meredith embraced Esri technologies for analyzing and displaying rates of erosion along the Lincoln shoreline.”

“Her use of ArcGIS StoryMaps as a presentation platform was professional and effective, not to mention engaging,” says Janzen, who is also a map library associate and geospatial data co-ordinator in Brock’s Maps, Data and GIS Library and Digital Scholarship Lab. “We could easily see how her research will be very useful for the Town of Lincoln moving forward.”

Above all, Caspell is grateful to the residents of Lincoln for their support of her research. “There were several people who donated old photographs and let me ask them questions,” she says. “I want to give a specific shout-out to the volunteers at the Friends of Lincoln’s History Archives for helping me sift through so many photographs, and to Brian Jaworsky for being my local kayak and shore access guide.”

The community is invited to give feedback on the project, as detailed on the MEOPAR-Lincoln blog.