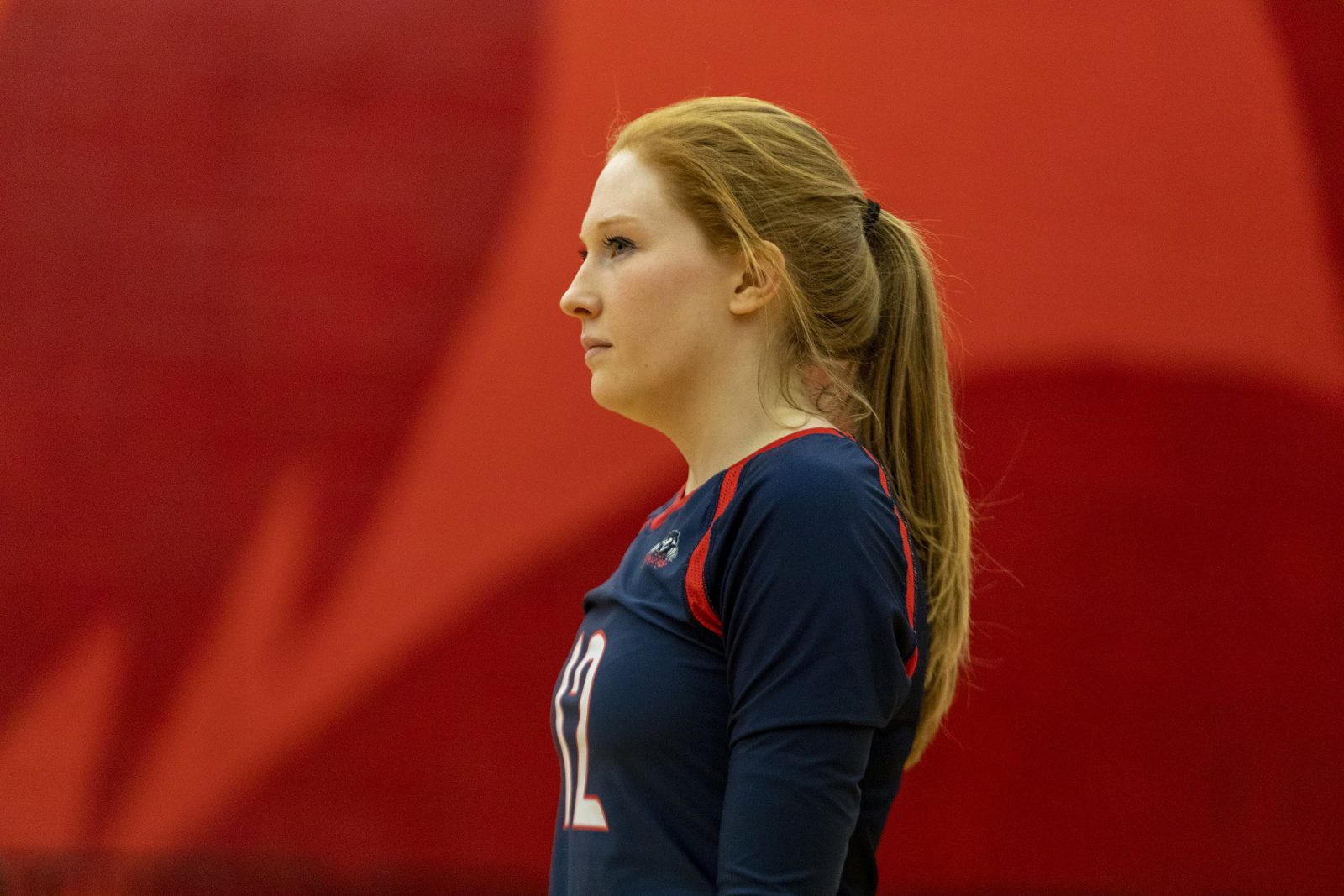 Former Brock women’s volleyball outside hitter Darby Taylor is remaining at the University to complete her MBA before pursuing a pro volleyball contract.

Women’s volleyball player Darby Taylor (BSM ’19) was on the verge of playing pro overseas before deciding to hit the books instead of the court this fall.

Taylor graduated in June with a degree in Sport Management and chose to return to Brock University and complete the final year of her Master’s of Business Administration (MBA).

“It was extremely important for me to be able to finish my degree first as it didn’t feel right to leave it uncompleted,” she said.

She is focusing her master’s research on the topic of ‘Women in Coaching’ under Sport Management Assistant Professor Patrick Reid.

Taylor, a 6-foot-2 outside hitter from Thorold, made her final season with the Badgers a memorable one. She posted nine double-digit kill games throughout the season to help Brock finish first in the Ontario University Athletics (OUA) West with a 14-5 record.

The league recognized Taylor’s contributions, naming her a Second Team OUA All-Star as the Badgers earned their first OUA Final Four appearance since 1990-91. Taylor came up big by leading the team in kills during their Final Four semi-final win over Guelph to punch their ticket to the U SPORTS Women’s Volleyball Championships for the first time in program history, which was ultimately cut short due to the COVID-19 pandemic.

At Brock’s year-end athletics virtual banquet, Taylor received the David Atkinson Surgite Award for her excellence in both the classroom and competing for Brock women’s volleyball team.

“I was extremely honoured to receive such a prestigious award,” said Taylor. “I am very grateful. The time management skills you gain from being an athlete and a student is life-long and is definitely worth the struggles along the way.”

Taylor transferred to Brock in 2016 after overcoming a serious ankle injury while competing in the National Collegiate Athletic Association (NCAA) for a Division 1 volleyball school where she studied accounting.

She wasn’t completely satisfied with the way her injury was handled and no longer saw her future in the accounting.

This, coupled with an interest in Sport Management, drew Taylor back to her hometown university.

“I was able to take a program I was really interested in and have a lot of different opportunities to volunteer and work in [my future] profession,” said Taylor. “That is something that would have never been available to me if I stayed in the NCAA.”

The program also allowed her to intern with her favourite basketball team, the Toronto Raptors, during the summer before they won the NBA championship.

“It’s hard to truly understand how great the school environment is at Brock until you are attending,” she said. “Playing in the OUA is definitely a great experience where you can feel that you are equally focusing on academics.”

While she excelled in the classroom with top marks, she was also serving up points on the scoreboard.

Head Coach Steve Delaney recalled his first impression of Taylor’s offensive prowess when he joined the Badgers in 2018.

“When I first got into the gym with Brock, I saw Darby and she was obviously a really strong attacker, but I didn’t know where I was going to put her in our formation,” said Delaney. “After watching her practice I took a chance by putting her on the right side and I’m glad I did. She was a threat with an amazing long, back-of-the-wall serve, which is almost impossible for the opposition to handle.”

Delaney said the team will miss her presence moving forward.

“I think some of the injuries she suffered while playing in the States really helped her mature as a player and as a person,” said Delaney. “She was dealing with a lot and she was able to overcome it all and put forth a great effort on the court. Darby brought a quiet sense of leadership. It’s going to be hard to replace that. She was a big piece of our puzzle.”