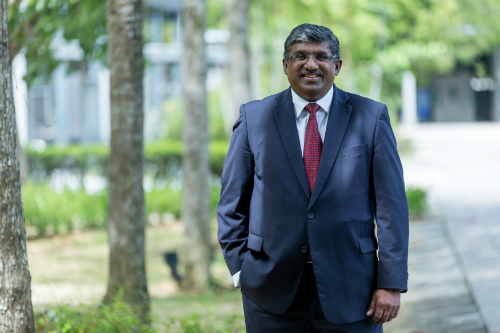 When Mahendhiran Nair (BSc ’89) arrived at Brock University on a chilly September mid-’80s day, he never imaged that 35 years later, he would earn a Distinguished Graduate Award.

He also didn’t know it would be where he met his now-wife of 28 years and fellow Brock graduate Marissa McNeil-Nair (BA ’88), with whom he shares three children.

“I’m very thankful Brock saw something in me,” said Nair.

From there, he became an Assistant Professor at Montréal’s Concordia University before eventually joining Australia’s Monash University’s Malaysian campus in 1998.

He’s been there ever since, climbing the ranks as Professor in 2006, but his academic rise expanded beyond teaching roles at Monash.

From 2010 to 2012, he became the Head of the School of Business before taking on the role as Deputy President (Strategy from 2012 to 2016. His latest challenge has been working as the Vice-President (Research and Development), a role he’s held since 2017.

“Much of my own research work is in the areas of using data science and econometrics modelling methods to study the relationship between science, technology, innovation and sustainable socioeconomic development in developing countries,” said Nair.

In 2012, Nair was appointed as the Fellow of Chartered Professional Accountant in Australia, and in 2018, he was appointed as a Fellow of the Academy of Sciences Malaysia, the first economist to be admitted to this prestigious academy.

Earlier this year, Nair was appointed as a member of the National Science Council of Malaysia by the Prime Minister of Malaysia, Tun Dr. Mahathir Mohamad, to help lead the national science, technology, innovation and economic development initiatives of the country.

Dean Ejaz Ahmed of the Faculty of Mathematics and Science is proud to have Nair accept the award in recognition of his outstanding global achievements. Nair and the Faculty reconnected through Brock’s Alumni Relations, where the two met during a trip to Malaysia as part of the commitment to the Faculty’s Research Enterprise, a program of global connections aimed to join Brock with meaningful relationships with higher learning institutions.

“Nair brings a strong combination of leadership, communication acumen and a wealth of knowledge to everything he accomplishes,” said Ahmed. “We are proud to have him as a Brock alumni. His award is well deserved.”

“My career trajectory, research outcomes and translational impact to the various stakeholders in the region would not have been possible without the strong mathematics training and comprehensive education I received at Brock University, which I am truly indebted to,” said Nair. “I still think of my days at Brock regularly.”