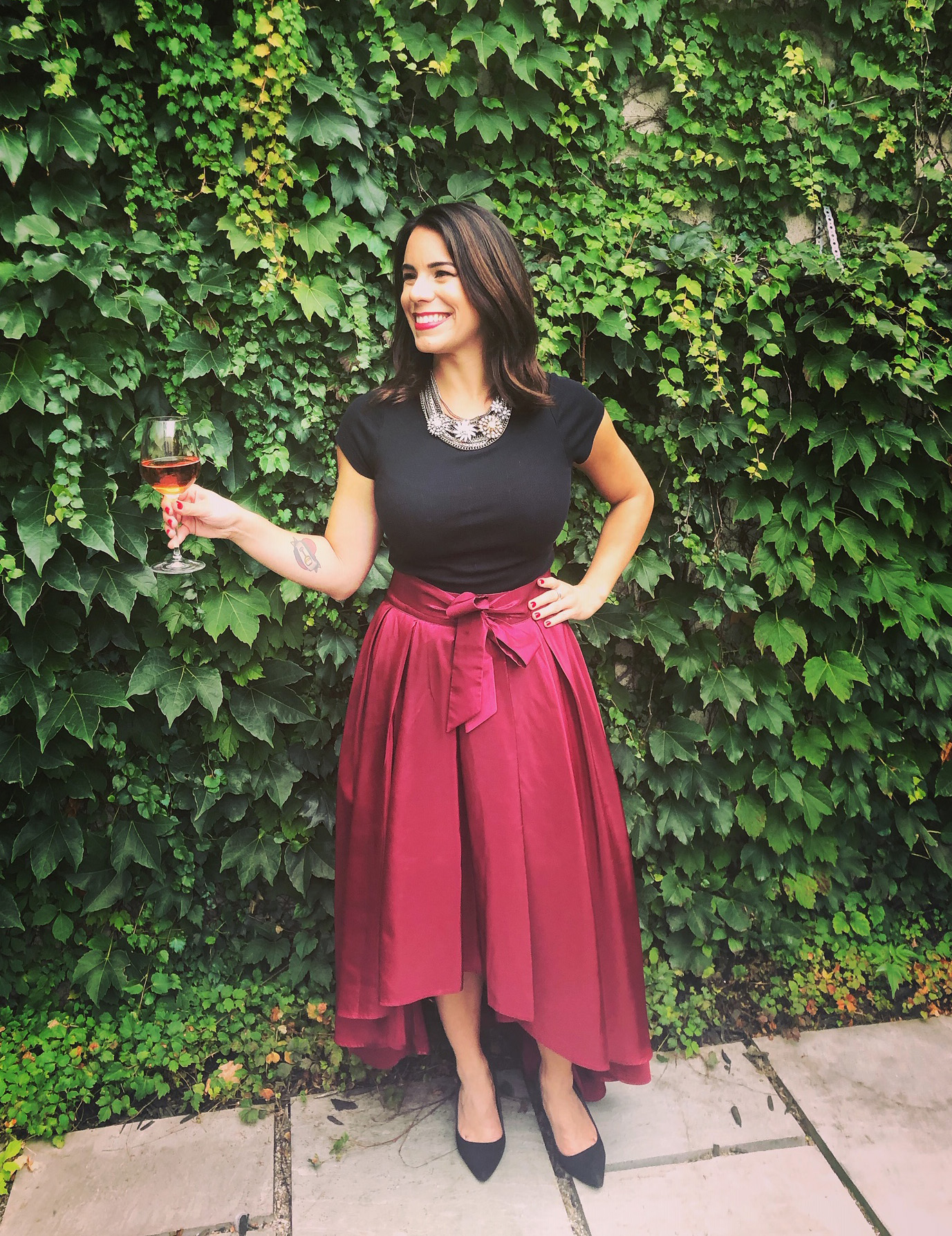 Angela Aiello, also known as Super Wine Girl, has been putting the “social” in social sciences ever since she was a Business Communication student in the Department of Communication, Popular Culture and Film.

Now Aiello (BA Hon. ’05) — wine expert, educator, innovator and award-winning entrepreneur — has sold her wildly successful venture, iYellow Wine Club, and is transforming her commitment to what she calls “the democratization of wine” by lifting up new voices and creating space in the industry for larger and more diverse communities of wine-lovers.

“Finding a way to bring alternative voices to the wine and spirits industry is where I really want to focus my efforts,” says Aiello. “Now is a time when change can happen, so it’s exciting to get back to not-for-profits and mentorship and scholarship programs.”

Growing up in a family of entrepreneurs in Niagara, Aiello worked at several local wineries before moving to Toronto shortly after graduation, where she mobilized the skills she developed at Brock to create iYellow Wine Club in 2006. She built up the social and educational group over the next decade to serve a community of more than 50,000 members with a permanent home in The Wine Cave, a licensed venue for classes and events.

Aiello began appearing in regular television segments on Steven & Chris and has been published in various magazines, along with working as a host educator at the LCBO. Carrying on the tradition of the Wine Institute classes she developed at her wine club, she also became an educator, producer and host of CHCH segments and educational consultant for the Washington State Wine Commission. This fall, she will host several virtual tastings through the LCBO — her latest tactic for demystifying wine.

Her contributions to the field haven’t gone unnoticed. Awards from Niagara Business Link Magazine, the Ontario Hostelry Institute, the Premium Independent Wineries of South Africa all attest to her impact. Brock University’s Cool Climate Oenology and Viticulture Institute (CCOVI) and the Wine Council of Ontario named her the 2017 VQA Promoter of the Year in Journalism/Media, and in 2019, the iYellow Wine Club received the George Brown College Industry Partner Award.

But for Aiello, the connections she made through the Wine Club were their own reward. She gained her Super Wine Girl moniker after an event at the Wine Cave one night, as staff and regulars talked and joked about wine superheroes.

“Super Wine Girl was formed out of this really amazing sort of wine family culture,” says Aiello. “Everyone still goes by their superhero names today.”

The iYellow Wine Club is also where Aiello first met Charlene Theodore, founder of the Black Women’s Wine Collective, for which Aiello is currently volunteering as wine director.

“Through the Wine Club, I ended up meeting so many people with amazing voices, whether they be LGBTQ or BIPOC,” says Aiello. “To me, bringing those voices out is incredibly important to the next phase of whatever I do. How do we amplify those voices at an industry level?”

Aiello also presently serves as Director of Strategy & Development at Femmes du Vin, a Canadian non-profit devoted to opportunities for women in wine and hospitality.

“Angela is a terrific example of how using skills gained in a degree can turn into pursuing one’s passions for a rewarding career,” says Ingrid Makus, Dean of the Faculty of Social Sciences. “The Faculty is thrilled to recognize her as an outstanding graduate who inspires current students to find their own way to be successful and make a difference.”

Aiello was “surprised, excited and honoured” to be selected as this year’s Faculty of Social Sciences Distinguished Graduate.

“You learn in social sciences not only about humans, but also the ethos behind why people do things and how you should do things,” says Aiello, who found creative ways to apply the specific theories and skills she learned about in her degree in a socially conscious way, blazing the trail to break down barriers in wine culture. “I think that has fundamentally helped shape who I am as a leader.”

Aiello entered the wine industry at a time when there were few young people and not a lot of women and says she remains profoundly grateful to the women who mentored her. She also credits her time at Brock with inspiring her commitment to teaching and mentorship, saying that she found her professors to be “stellar” and influential in her life.

She encourages new grads and people just starting out on a career path to “think colourfully” about how they want to feel about their work.

“Don’t think too much about, ‘Where do I want to be in five or 10 years?’” Aiello cautions. “Think about those things that are going to help bring you joy — because what you do every day can change, based on how you rotate and evolve your career.”

“I think that we’re all Super Wine Girl — one day, my Super Wine Girl channel’s just going to feature super wine girls from all over the world,” she says with a smile. “My real passion is in making sure that we help build platforms for alternative voices in the wine and spirits business and help them be heard around the globe.”