Ahead of Emancipation Day, Brock and FirstOntario PAC host screenings of It Takes a Riot 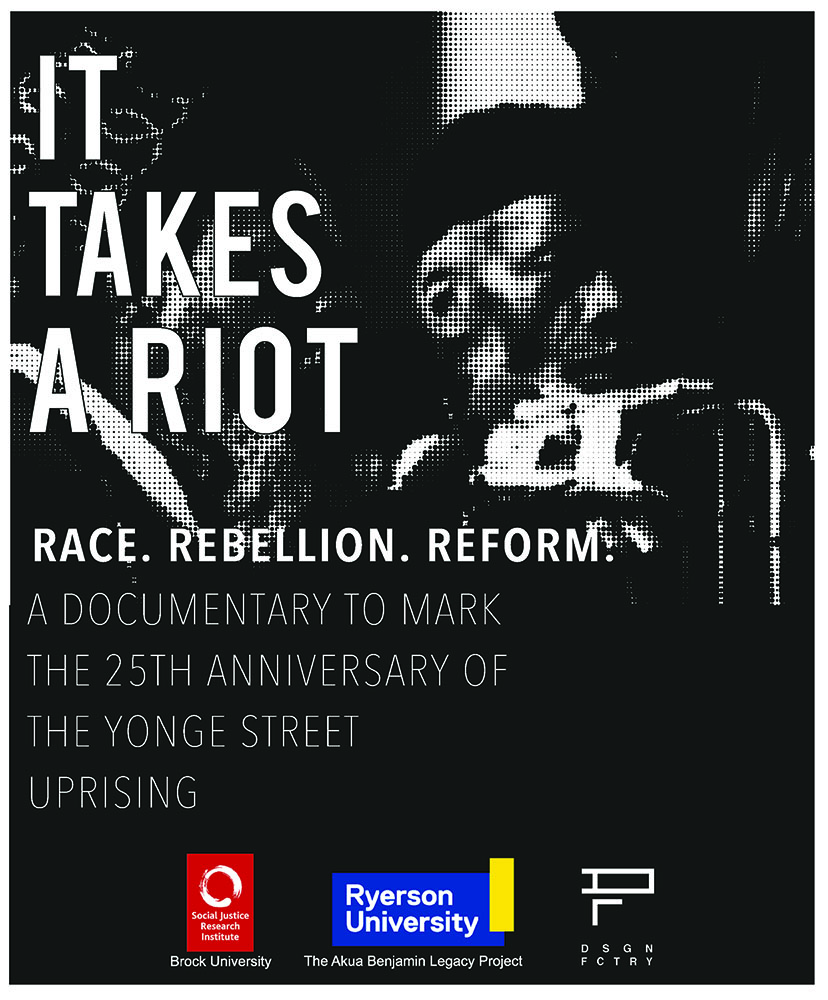 The original movie poster from the documentary It Takes A Riot: Race, Rebellion, Reform.

A weekend of Emancipation Day events online and in downtown St. Catharines will include two screenings and a panel discussion of an acclaimed documentary of the 1992 Yonge Street Uprising.

Brock University and the FirstOntario Performing Arts Centre are joining together for a community event to present It Takes A Riot: Race, Rebellion, Reform on Friday, July 31.

Simon Black, Assistant Professor in Brock University’s Department of Labour Studies, co-wrote and co-produced the film in 2017 with co-writer/director Howard Grandison and co-producer Idil Abdillahi, Assistant Professor of Social Work at Ryerson University. It tells the story of the May 4, 1992 protest-turned-riot in Toronto following the Rodney King verdict in Los Angeles and the shooting death of a young Black man, Raymond Lawrence, by Toronto police.

“The film documents an important moment in the fight against anti-Black racism in Canada,” says Black. “Yet it’s a moment too often ignored in our history books and seldom taught in our schools. While Emancipation Day marks an important moment in the history of the Black freedom struggle in Canada, by sharing this film with the Niagara community in the context of police killings of Black people and a resurgent Black Lives Matter movement, we hope the community will see that this freedom struggle is not simply history, but ongoing.”

Brock has a long history of community engagement and this film screening and panel discussion is one of the ways the University is partnering with the community for important events such as Emancipation Day. Brock is committed to supporting Niagara’s social and economic development and building a culture of engagement with the community.

“The FirstOntario Performing Arts Centre is committed to amplifying and supporting the work of Black, Indigenous and People of Colour artists, businesses and organizations through action,” says Colleen Smith, Executive Director of the FirstOntario PAC. “We are committed to prioritizing the eradication of racism with specific actions through partnerships like this, that promote inclusivity, equity, accessibility and that foster and celebrate diversity.”

The first screening will take place at 7 p.m. through the PAC’s Facebook and YouTube channels. When the 27-minute film concludes, the broadcast will continue with a panel discussion featuring co-producers Black and Abdillahi (co-producer), as well as:

The panel discussion will be moderated by Kattawe Henry, Human Rights and Anti-Racism Advisor at Brock University.

At 9 p.m., the event will move outdoors as the PAC screens It Takes a Riot in the Mann Raceway Plaza (PAC backyard), an outdoor film and entertainment venue which is reopening this week now that Niagara has entered Stage 3 in the COVID-19 recovery.

It Takes a Riot will be followed by a screening of Wilma, a 74-minute film that celebrates the life of Brock University honorary doctorate recipient Wilma Morrison, who was regarded as the custodian of Black History in Niagara. The film will be introduced by director Ayo Adewumi.

The outdoor space is located in the Mann Raceway Plaza located directly behind the PAC. Physical distancing circles will be place, so capacity is limited. Attendees are encouraged to bring their own lawn chairs and blankets for seating. Visit the PAC website for more information on health and safety protocols in place.