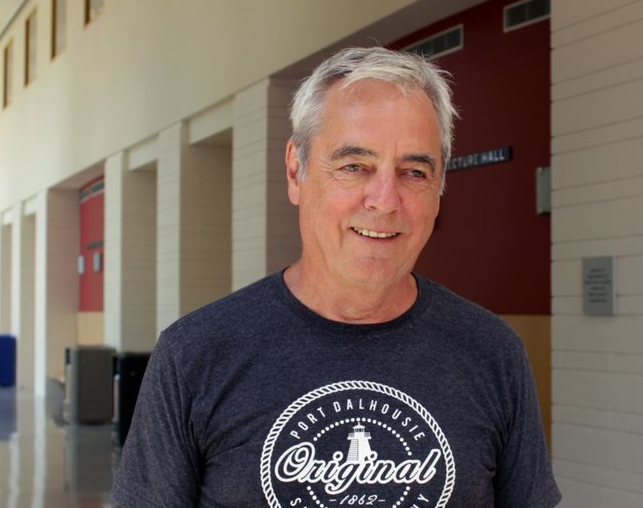 Nick Baxter-Moore, who concludes his 35-year career at Brock University with the Faculty of Social Sciences Teaching Excellence award for 2020, shown outside the classroom where he delivered his last lecture on campus.

Anyone who knows Nick Baxter-Moore knows of his devotion to Bruce Springsteen.

However, they might be surprised to learn that Baxter-Moore, a Professor in the Department of Communication, Popular Culture and Film and the recipient of the Faculty of Social Sciences Teaching Excellence award for 2020, also considers Springsteen — and other stadium musicians with a political bent, like Steve Earle — a big influence on his teaching.

In many ways, Baxter-Moore approaches his teaching in the same way The Boss might try to write a hit song, ensuring that all the elements are in place to motivate his audience to listen, remember and try to sing along.

“Good teaching, in any area and at any level, depends on communication, mutual respect, acknowledgement of values and enjoyment,” says Baxter-Moore, who has taught high school, college, undergraduate and graduate courses over his 50-year career as an educator. “Of course, content is important, but in the absence of those other things, it’s unlikely to be received by many students.”

As a musician himself, Baxter-Moore also recognized early on that performance is a key element in effective delivery.

“Teaching is a performance, especially when you’re teaching in front of large classes in which you are sometimes literally on stage,” he says. “You’ve got to think in terms of what your audience wants out of this, which is to say, what the students need or want, and to acknowledge their values — why they’re taking the class, what they expect to get out of it and then try to make the course relevant to them.”

Baxter-Moore notes that some of his earliest teaching training involved video-recording mock lectures to get feedback on both content design and, often more importantly, he says, delivery.

In addition to being known as an engaging lecturer and seminar leader who encourages students to develop learning strategies for themselves, Baxter-Moore has long been appreciated by students for his commitment to fairness, which he believes grows out of the mutual respect he tries to foster with his students.

His first teaching experiences taught him a few important lessons in this regard.

“When I was teaching high school, I was 21 and my oldest students were 19, and when I was teaching at a technical college, virtually all of my students were older than me,” he explains. “I couldn’t really use age and experience as ways to gain respect, so I had to show respect for the students and where they were coming from and hope they did the same for me.”

As a result, his 35 years at Brock have seen him teaching everything from Canadian Political Economy and Research Methods to Event Management and Popular Music, as well as a whole lot in between.

Along the way, Baxter-Moore also mentored and supported students in various administrative roles, including stints as Undergraduate Advisor, Chair, Graduate Program Director and the Associate Dean, Undergraduate in the Faculty of Social Sciences.

“I have had the privilege of working with Nick for many years, as a colleague in Political Science as well as a fellow administrator in the Dean’s office,” says Ingrid Makus, Dean of the Faculty of Social Sciences. “In his numerous roles, he has always put students first. That is an admirable quality.”

Across programs, disciplines and levels of study, Baxter-Moore says he finds a few aspects of teaching consistently rewarding.

“The opportunity to learn from students about content, particularly examples that may allow me to enhance the relevance of the course for their peers, is terrific,” he says. “And working with a student to develop transferable skills such that the student then does better in other classes, too, is probably the biggest thrill of all.”

He also finds great satisfaction in staying in touch with former students who have moved on to bigger and better things after graduation.

“Even if they don’t always see it at the time, I always promise that they’ll appreciate their research methods course a couple of years down the road, even if they hate it now,” he says. “Sometimes they actually do come back and say, ‘You know, I didn’t believe you at the time, but it actually did come in really useful.’ That’s always good to hear.”

Reflecting on his career, Baxter-Moore recalls an early encounter in Ireland with the politician and writer Conor Cruise O’Brien that left a lasting impression.

“One night in a bar, O’Brien asked me for some factoid of Irish electoral trivia, to which I replied that I didn’t know the answer, but I would find out and tell him tomorrow, or if he needed the answer urgently, I could tell him where he would likely find it,” Baxter-Moore recounts.

“He laughed and said, ‘There speaks a truly learned man. The wise man is not one who thinks he knows everything, because he’s invariably wrong, but one who knows how to find the answer.’ I have always remembered his words, and they have guided my approach to teaching ever since.”