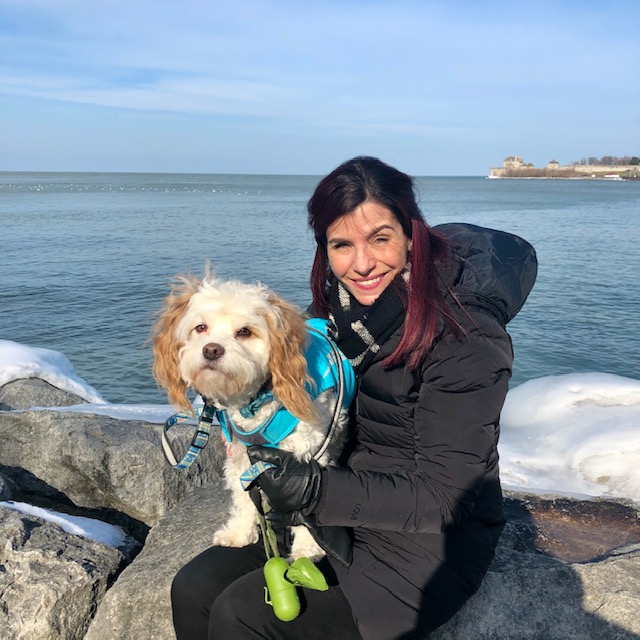 Associate Professor Carole Stewart is this year’s recipient of the Excellence in Teaching Award for the Faculty of Humanities. Stewart teaches African American literature with the Department of English Language and Literature. She is pictured here with her dog, Tommo, named after a Herman Melville character, who is well known to her students.

With a pedagogy firmly committed to antiracism and decolonization, Carole Stewart provides her students with a safe place to engage in difficult topics.

Stewart, an Associate Professor with the Department of English Language and Literature, is this year’s Faculty of Humanities Award for Excellence in Teaching recipient. Her classes explore African-American literature as well as slavery and its aftermath, including racism, white privilege, white supremacy, colourism and passing.

“Given that the United States begins in a colonial context with a revolution and then retains slavery for almost another century, slavery, colonization and race are central to not only African American or Indigenous texts, but also to white European American authors and their senses of cultural and national identities,” says Stewart.

While some lecturing is necessary to give students context for American literature and history, Stewart favours a decentred, student-led pedagogy that gives students confidence to speak about and reflect on their own interpretations of the text.

“I think students learn the most from their discussions among each other,” says Stewart. “Some of the most successful classes have been predominately student-led.”

She points to a fourth-year seminar on alcohol in American literature and culture, where students were able to “deeply relate to some of the issues on addiction and temperance in the 19th century and their intersection with racial and gendered identities.”

“Even before the extraordinary events of the past weeks and months, Professor Stewart was known to students for her ability to listen and respond to their questions and concerns,” says Associate Dean of the Faculty of Humanities Neta Gordon. “Her pedagogy is always focused on helping students find space to think through and respond to even the most complicated and unsettling of issues and texts.”

Teaching texts such as Charles Chesnutt’s novel The Marrow of Tradition and William Wells Brown’s Clotel or The President’s Daughters gives students the opportunity to discuss racism, slavery and transnational meanings of freedom, as well as question how amends can be made.

“Through reading the literature, students should understand that racial injustice and inequality are systemic and rooted in a long history,” says Stewart. “Empathy is important, and students feel that in personal responses and collaborative work, but I also want them to view themselves as having a role in this larger story of recovery and justice.”

Literary studies can help us connect with and understand how we have arrived at moments like the current Black Lives Matter movement, says Stewart.

“Literature also offers strategies for survival, hope and healing, and moments or visions of justice, equality and recovery,” she says.