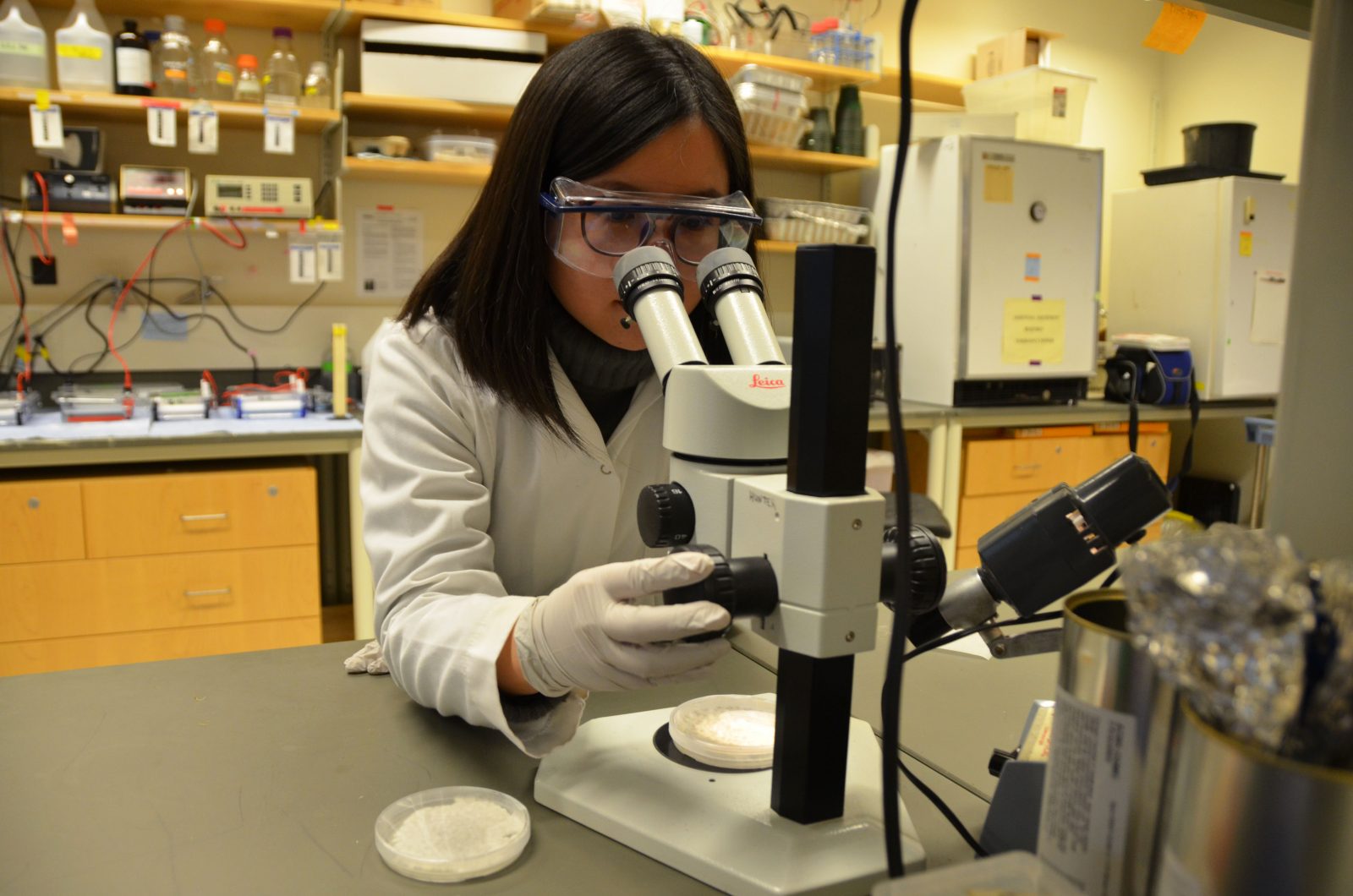 A certain type of fungus has captured the imagination of Brock University researchers since their discovery that the fungus supplies plants with naturally-occurring nitrogen, making it an excellent ‘green’ fertilizer.

In a breakthrough paper published eight years ago, the team documented how Metarhizium is able to kill bugs and transfer nitrogen from those dead insects into a plant’s root system. Subsequent research revealed that the fungus receives energy from the plant, making the fungus-plant relationship even more mutually beneficial.

Halfway around the world, student researcher Shasha Hu was also intrigued by an insect-associated fungus. While doing her master’s degree at Nanjing University in China, she found that the fungus she studied produced metabolites, biologically active substances that are usually small molecules.

“I wondered, ‘What is the function of these metabolites in the fungus?’” she recalls.

As she searched for the answers, Hu came across the work of Brock Professor of Biology Michael Bidochka, who heads Metarhizium research at the University. She was intrigued by what she read.

“I asked him if I could do research about the interaction between the fungi and the host plant,” she says. “He said yes, so that’s the reason I came to Brock.”

One aspect of Hu’s PhD work in Bidochka’s lab focuses on the production and function of conidia, which are a type of spore.

Metarhizium produces and uses this spore to kill bugs, which, in turn, become the plant’s nitrogen source. However, when Metarhizium is grown in a Petri dish, it loses the ability to produce conidia over time. This is a problem in the commercial production of fungal conidia for insect biocontrol or as a plant biofertilizer.

Hu wanted to see what would happen with conidia production if the fungus was grown through a plant as the host.

She used a technique called the ‘drenching method,’ in which she added large amounts of conidia to soil and then grew Metarhizium in that soil. Meanwhile, Hu planted a bean plant into the soil. Eventually, the fungus entered the plant through its root system and started growing inside the bean plant.

Then, surprisingly, when the fungus was re-isolated, it ramped up conidia production.

“The plant did something to the fungi to make the fungi produce more spores,” says Hu, who found that the bean plant plays a role in ‘epigenetic modification,’ a process that enables cells to interpret instructions encoded in DNA in different ways.

“This means the expression of the DNA in the genes can be changed without altering the sequence of the DNA.”

One of her research goals is to figure out what triggers the epigenetic modification process in the bean plant so that the fungus can be modified to make more conidia spores without it having to grow inside the bean plant.

Bidochka, who supervises Hu, says this research has tremendous implications for agriculture.

“Shasha did a great job of using her imagination in order to solve a problem in the commercial production of this fungus,” he says. “Sometimes you have to think outside the box.”

For her part, Hu says she aims to “make a difference” through her research.

“I love to do research that has some application in agriculture,” she says.

Hu and Bidochka’s research, “DNA methyltransferase implicated in the recovery of conidiation, through successive plant passages, in phenotypically degenerated Metarhizium,” was published April 21 in the journal Applied Microbiology and Biotechnology.