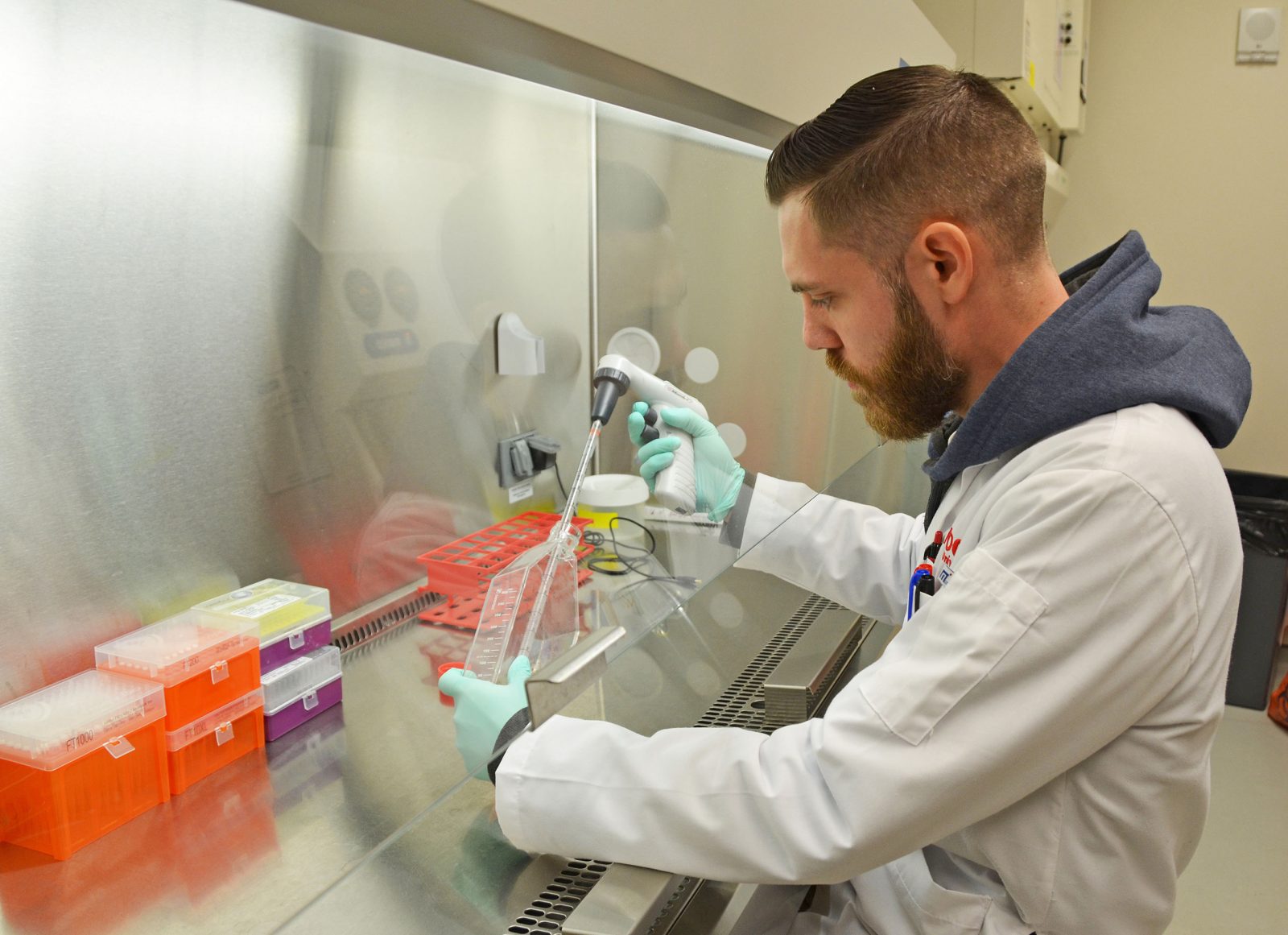 Brock University PhD student Colton Watson, pictured, and Associate Professor of Health Sciences Adam MacNeil are heading up a research team that has discovered a process that could essentially eliminate allergic symptoms.

Spring is in the air, and so are other things that cause many noses to run and eyes to water.

A Brock University research team has discovered that blocking a particular protein early in the process leading to an allergic reaction could essentially eliminate allergic symptoms.

“A major novelty of the finding is that this protein, which is pretty well-known and has been looked at in a number of other cells and contexts, happens to affect both the early and late phase of an allergic reaction,” says PhD student Colton Watson.

The protein, called TAK1, is found in a number of cell types including mast cells, which are immune cells found in tissues such as the skin, respiratory tract, digestive tract and other areas that are in contact with our external environment.

Mast cells, like other immune cells, protect the body from infections caused by pathogens such as parasites, bacteria and viruses, maintaining healthy tissue in the process.

But strangely, mast cells can also react to innocuous substances in the environment – pollen, animal dander, certain foods, among others – that should pose no real threat. These are known as allergens.

This sets off a process in which TAK1 is activated and sends out a signal that splits into two. The research team found that one signal leads to a process called degranulation, where cellular ‘packages’ called granules release molecules that lead to the hives, itchiness, swelling and other immediate ‘early phase’ symptoms of an allergic reaction.

The other signal sets off two additional pathways that produce proteins called cytokines and chemokines, designed to promote inflammation and recruit additional immune cells to fight off infection.

But what if there is no infection?

Because the allergen itself is not a dangerous pathogen, the proteins end up causing further unnecessary inflammation and tissue damage several hours later in the ‘late phase.’

“Mast cells are not evolutionarily programmed to do this,” says Adam MacNeil, Associate Professor of Health Sciences, who is Watson’s supervisor.

“Allergens like peanuts or shellfish pose no real threat and as such, the aggressive immune response is misguided and harmful. It’s an inappropriate manifestation of the immune system; an overreaction to something that is innocuous and not dangerous.”

Watson says that although previous research has focused on TAK1’s role in other immune cells responding to actual infections, it’s never been looked at in the context of allergically-activated mast cells.

“We wanted to determine if the role of TAK1 in other immune cells is conserved in allergically-activated mast cells, and to see if we could therefore target TAK1 to stabilize these mast cells by preventing its activation,” he says.

What’s unique about the team’s research compared to earlier studies is that they showed that TAK1 plays a profound role in bringing about allergic reactions through processes in mast cells and that inhibiting TAK1 stops the allergic events in their tracks preventing them from proceeding to the early and late stages of allergic reactions.

The researchers verified that a chemical generated by fungus – 5Z-7-oxozeaenol – widely referred to as “OZ” potently inhibits TAK1.

“The results generated provide a strong pool of evidence to support additional investigation into the potential of targeting TAK1 in the treatment of allergic inflammation,” says the study, “TAK1 signaling activity links the mast cell cytokine response and degranulation in allergic inflammation,” published in the Journal of Leukocyte Biology.

Watson and MacNeil stress that it’s too early to determine if drugs modelled from OZ can mitigate allergic reactions, saying that they and other researchers can build upon what they found in this study.

“The next step is to use the knowledge gained from this study to take rationale and targeted strategies for novel therapeutic design,” says MacNeil.

Allergies are a growing concern for many in Canada and worldwide.

A 2016 Canadian Allergy, Asthma and Immunology Foundation report says one in every four or five Canadians – 20 to 25 per cent of the population – has hay fever, and according to Food Allergy Canada, more than 2.6 million Canadians, including almost 500,000 children, live with food allergies that need to be managed daily.

“Allergies are absolutely an epidemic,” MacNeil says. “It’s very much a combination of our environment, immune system and how they interact with one another.”