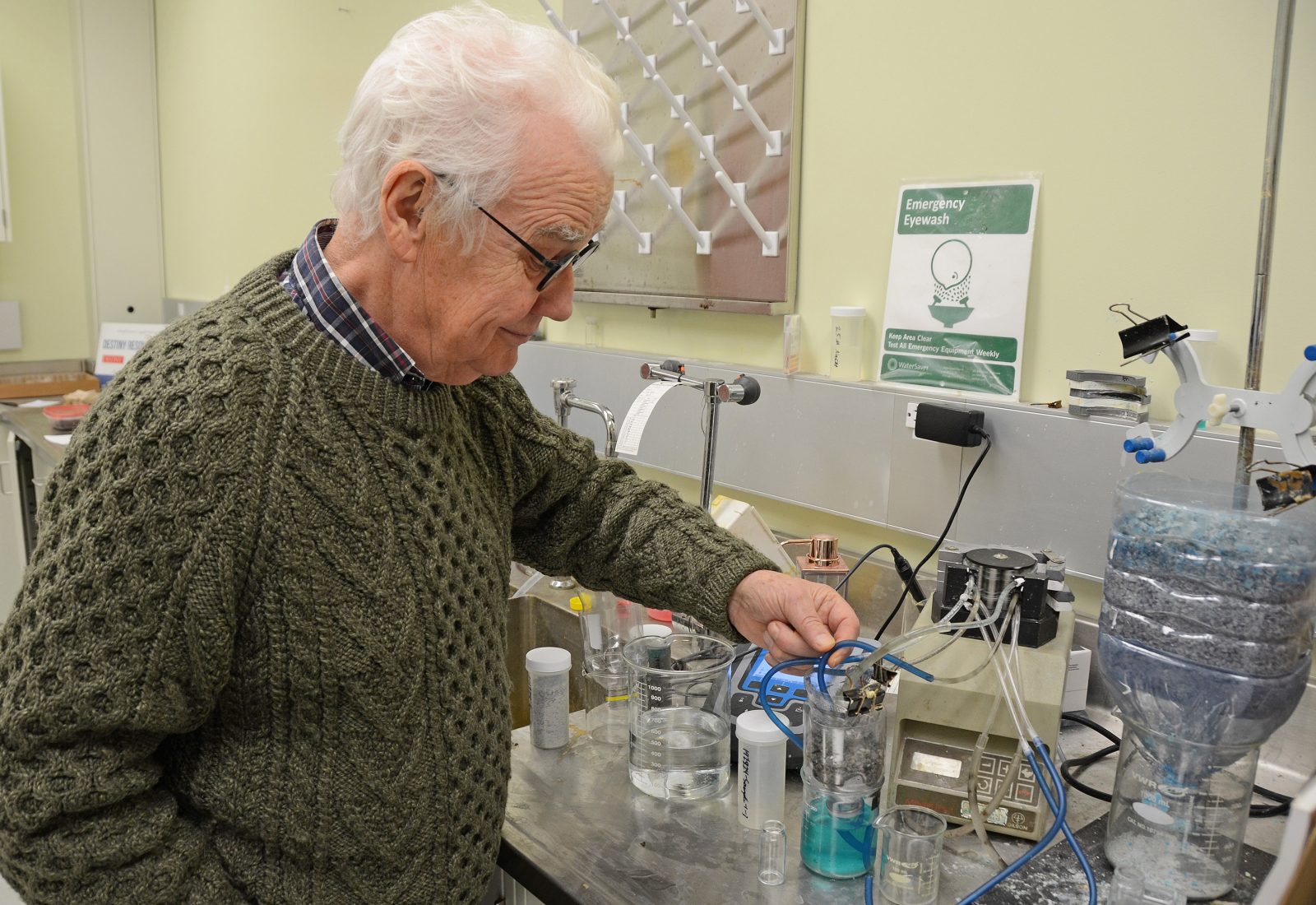 Brock University Chemistry Professor Emeritus Ian Brindle works in a lab on a new method to extract and produce copper.

The experiment involves putting an iron nail into a solution of copper sulphate and then watching dark, reddish-brown patches of copper metal adhering onto the nail.

While it’s an exciting way to grow copper, the fun stops when students are faced with scraping the copper off the nail. Not only is it tough work, but the copper becomes contaminated with iron in the process. 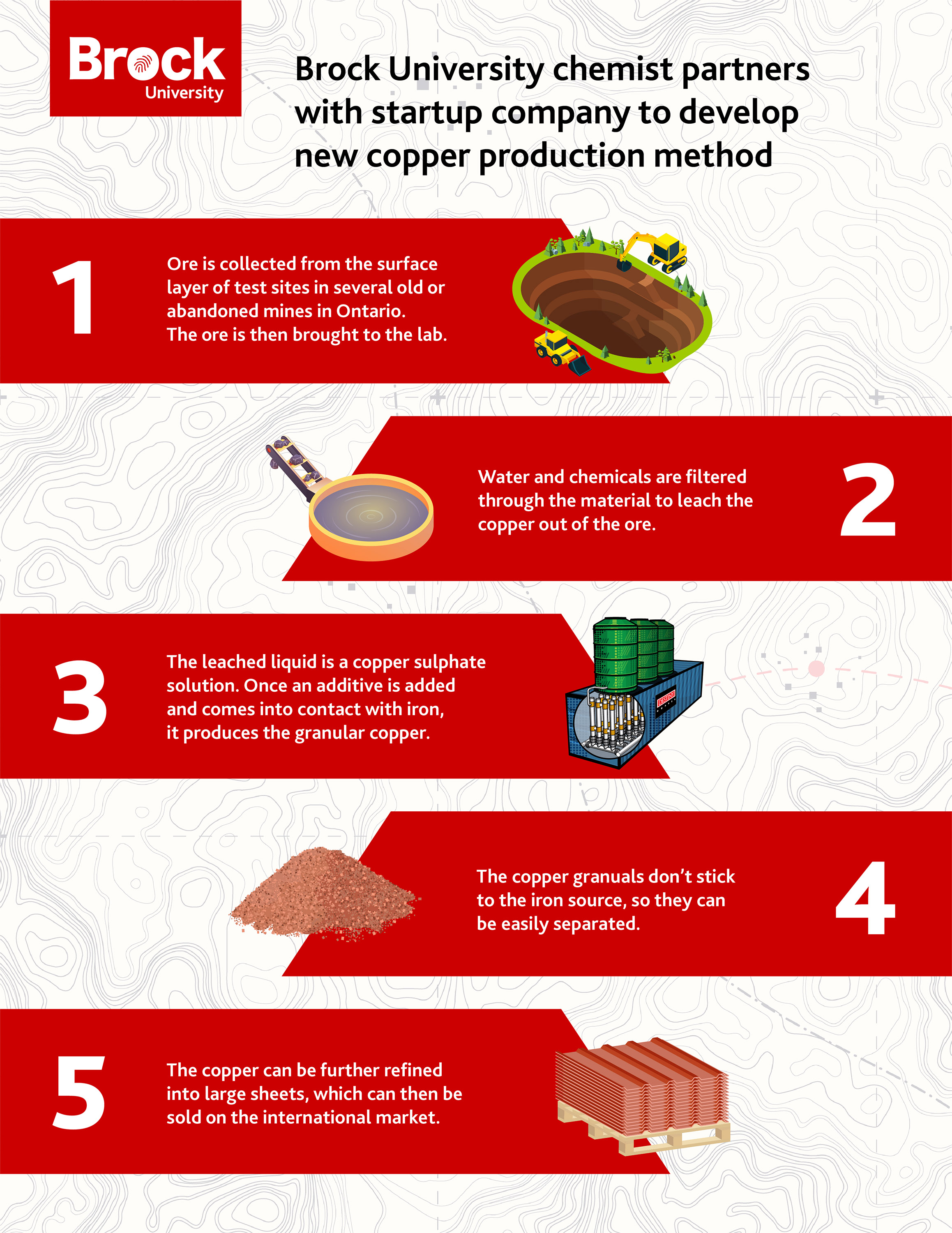 Fast forward a few decades, where Brindle points to a vat containing a copper-covered iron bar immersed in a leached copper solution. He picks up the bar, but instead of scraping the copper from the iron, Brindle merely wipes it off. The shiny, high-purity copper crystals fall from the iron effortlessly, like tender meat off a bone.

The copper in the solution came from an abandoned Ontario mine that has only tiny deposits of the element tucked away in many layers of rock.

Brindle has partnered with Destiny Copper Inc., a resident company in the Goodman School of Business’ Goodman Group-Venture Development in the Brock LINC, to develop new methods of producing copper. These methods have the potential to revolutionize the copper mining industry in Canada and beyond because they are simple and mobile.

“We’ve already got Swiss copper traders that are willing to buy as much as we can produce, so the demand is there,” adds co-owner Greg Hanna.

The aim of Destiny Copper’s work is to offer a new way of extracting copper from small deposits of copper ore (crushed rock and other deposits) that most large-scale mining companies would consider to be too small to process using conventional methods.

The first step involves extracting and dissolving copper from rocks in which the mineral is contained. The company collects ore from the surface layer of test sites in several Ontario mines that are old or abandoned, which is then brought to the lab, where water and chemicals are filtered through the material to leach the copper out.

The leached liquid is a copper sulphate solution that Hanna affectionately calls “blue juice.” Once an additive is added and comes into contact with iron, it produces the granular copper.

“The discrete crystals don’t stick to the iron, so you can easily separate the copper once it’s produced from the iron,” says Brindle. “That gives you the opportunity of purifying the copper further into big sheets that weigh 125 kilograms, which can be sold on the international market.”

The game changer, says Hanna, is that this method uses virtually no electricity and requires far less equipment than conventional methods. Normally, sophisticated extraction equipment would be needed to remove the copper from the iron.

“It’s a far greener process than the current copper extraction technologies, which require huge amounts of electricity,” he says. “It’s the cleanest form of mining there could be.”

Hanna notes that as green technologies such as electric vehicles, solar and wind power generation gain traction, copper will be in even greater demand.

“These technologies take up to 12 times the amount of copper when compared to fossil fuel electricity generation,” he says.

“You’ve got high-value copper essentially marooned in the environment and nobody is going to spend the money to extract that copper using conventional techniques, so you’ve got to come up with something novel,” he says. “Because of the simplicity of the technology, you can load all of the equipment you need on the back of a flatbed truck; when the copper is mined out, you put everything back on the truck and go to the next place.”

The company is now working on additional funding to further refine the equipment needed for mobile operations. 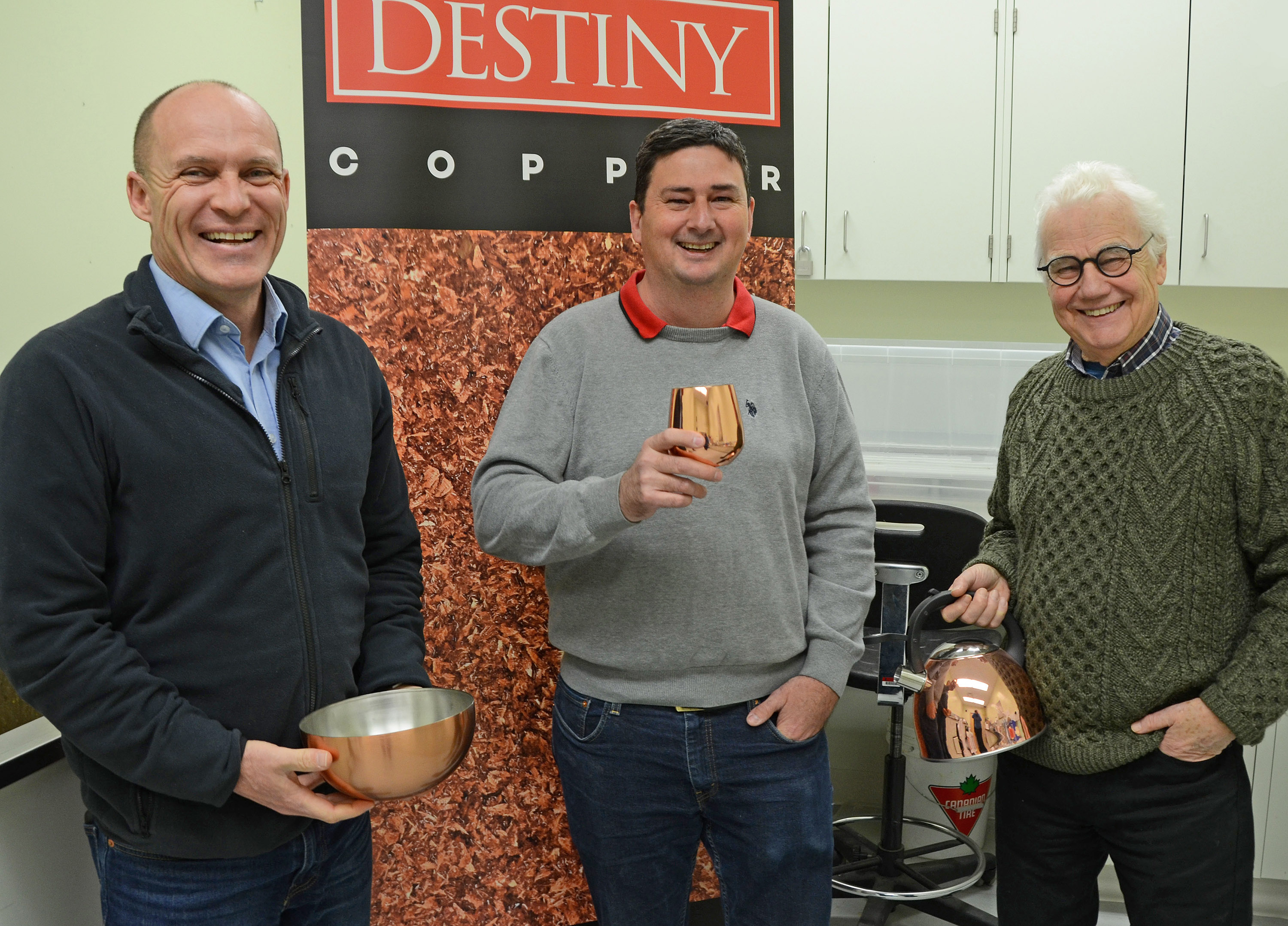