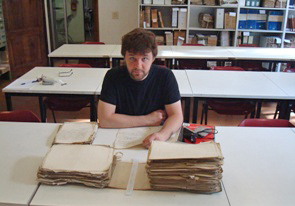 Colin Rose has spent more than eight years researching homicide cases from the 17 Century Bologna, Italy. His new book, A Renaissance of Violence: Homicide in Early Modern Italy, examines the connection between rising violence and a society’s distrust of its institutions.

Bologna, Italy, saw dramatic societal changes in the early 17th century that led to the highest ever recorded homicide rate in Europe by 1660.

A new book by Colin Rose, Assistant Professor in the Department of History, analyizes how a stable, peaceful society can quickly descend into disorder and violence.

“What the story of homicide in Bologna in the 17th century shows,” says Rose, “is how quickly a stable society, when confronted with a series of crises and governed by a series of institutions that are unable to respond efficiently, effectively and fairly, to those crises, can crumble.”

A Renaissance of Violence: Homicide in Early Modern Italy (Cambridge University Press, 2019), examines how economic decline, climate-induced drought and plague lead to the decline of social institutions and rise of interpersonal violence.

Rose spent up to eleven hours a day sifting through archival records in Bologna for a year and half to identify criminal court cases involving violence. His research includes both statistical analysis and the stories of those affected by violence in early 1600s Bologna.

Rose’s research is part of a larger conversation on how declining social trust in a society’s institutions can lead to increased violence. Rose suggests there are policy lessons that can be learned from seventeenth century Italy.

As social bonds crumbled under the pressure of plague and climate-induced famine, the seventeenth century Bolognese revived old rivalries and kin-based politics, leading to an outbreak of interpersonal violence, says Rose. Gang violence and the current U.S. gun control debate are modern examples of the interplay between a society’s trust in its institutions and violence.

“In the west, what we are seeing is a process whereby internal political elements are deliberately assaulting the institutions that have governed the west for more than half a century,” says Rose. “We need to be protecting our institutions, both at high political levels, like independent courts, as well as local levels, like libraries, public schools, community centres and playgrounds. Places where people meet and learn to trust one another.”

A Renaissance of Violence: Homicide in Early Modern Italy was released in North America on Dec. 5 by Cambridge University Press.

This story was written by Faculty of Humanities Social Media Intern Mackenzie Roe.