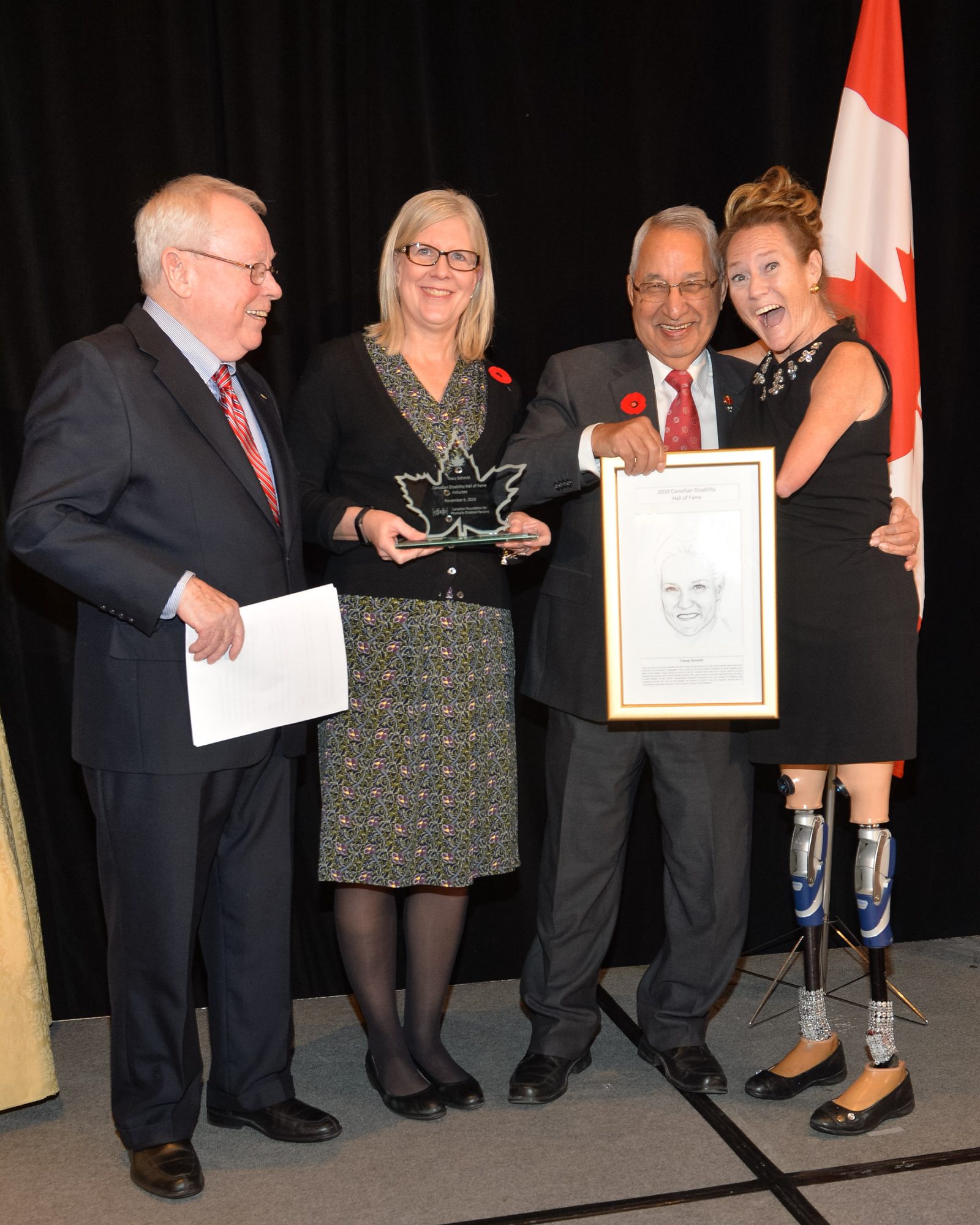 Tracy Schmitt was born a four-way amputee, but Unstoppable Tracy, as she’s known, has never let that prevent her from living a high-energy, adventure-filled life.

In recognition of the extraordinary contributions Schmitt (BRLS ’95) has made to enriching the quality of life for people with physical disabilities, she was inducted into the Canadian Disability Hall of Fame at a ceremony earlier in November at the Fairmont Royal York in Toronto.

Founded by the Canadian Foundation for Physically Disabled Persons, the event celebrated individuals in three categories: builder, achiever and athlete. The inductees are individuals who have made a difference for people with disabilities in the areas of sport, education, employment or housing.

“I like to say we are all born limitless,” said Schmitt. “I was lucky enough to be born this way, so I discovered really early in life that adversity, grit and perseverance are all fabulous things that lead to incredible results.”

Reflecting on her achievements, Schmitt credits her mother with teaching her that the secret to getting someone to consider a new idea or perspective — something she has had to do countless times — is to find a way to take the person from “no” to “know.”

On the morning of her first day of kindergarten, the principal told her mother that Schmitt couldn’t attend the school because it didn’t have the resources to support special-needs students. Schmitt’s mom responded by asking him to let her daughter attend class for one week, saying if it didn’t work out, she would look elsewhere. He agreed.

“That day, my little five-year-old brain realized that ‘no’ just means they don’t ‘know’ yet,” said Schmitt. “They need time to understand.”

Her academic journey led her to Brock University, where she completed her Bachelor of Recreation and Leisure Studies in 1995.

“Brock really helped me to lay the foundation of self-discovery,” Schmitt shared when she returned to campus in December 2017 to share her inspiring story with honour students in the Faculty of Applied Health Sciences. “As a student, I could have never imagined how great my life was going to be, but by taking risks and being positive, I’ve blasted barriers and obstacles.”

During her 2017 visit, Schmitt left a lasting impression by speaking with students, parents and community guests about her accomplishments, defining moments and the philosophies that guide her life.

“Tracy has so many unique and extraordinary experiences which she has faced head on with determination and optimism,” said Faculty of Applied Health Sciences Dean Peter Tiidus. “She is an inspiration and I applaud her for embracing life’s challenges with such energy and enthusiasm. On behalf of the Brock community and our alumni family, I extend congratulations for this remarkable achievement.”

Among her accomplishments, Schmitt has sailed competitively in both Paralympic trials and World Cup Series regattas, captained an 110-foot-tall ship in the eastern Atlantic and won a bronze medal in alpine para-skiing at the Ontario ParaSport Games.

Brock University Accessibility and Inclusion Advisor Chris Lytle said he’s known Schmitt for years through the Ontario Sailing Association, and that she’s someone “who always seem to be doing something more amazing every day.”

“I would like to congratulate Tracy for her outstanding accomplishments and know that her achievements are an example to anyone who wants to be a leader, regardless of who they are or where they come from,” said Lytle.