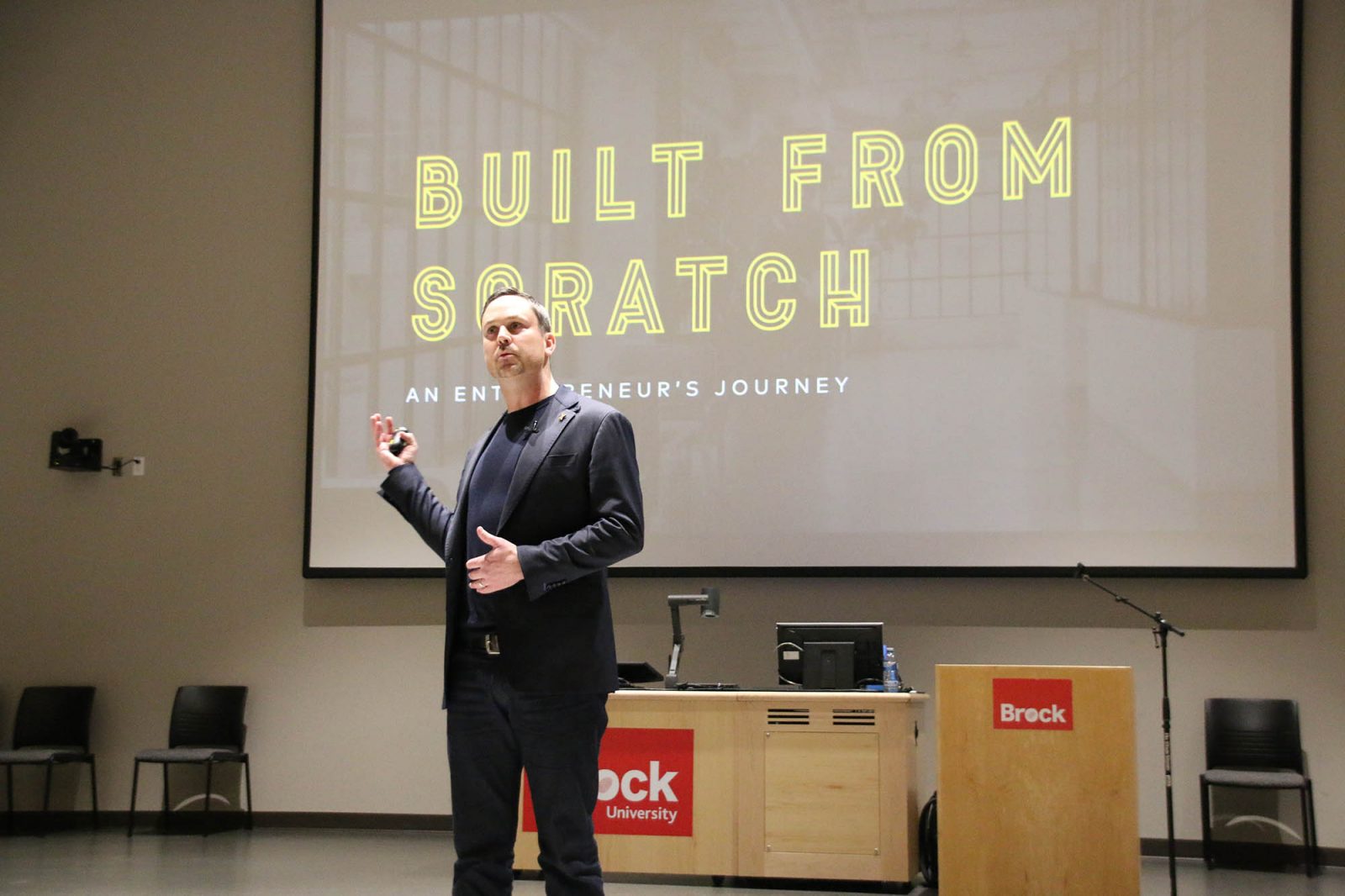 Being invited to speak at the 19th annual Terry O’Malley lecture made Dave Lafond do a lot of thinking.

“I still feel like this young guy who’s trying to make it in his career,” said Lafond, Advertising Executive and Co-Founder of No Fixed Address.

On Thursday, Nov. 14, he spoke about the twists and turns he’s experienced as an entrepreneur in his lecture, “Built from Scratch: An Entrepreneur’s Journey,” where he shared how he advanced from account executive to agency president to starting his own agency.

The free event, held at Brock University’s Sean O’Sullivan Theatre, caused Lafond to reflect on his own university experience, where he felt “a world away” from his classmates.

“I grew up in northern Ontario, and I was going to school with people from Toronto whose parents worked in corporate,” said Lafond. “I swept floors.”

After graduating, many of his classmates immediately went into corporate jobs at big brands and consulting firms.

He says it wasn’t until he got into advertising that he discovered his risk-taking tendencies. During his early years at an agency called Publicis, Lafond had two mentors — one of whom would end up having a major impact on both his personal and professional life.

Serge Rancourt is now Lafond’s business partner, who hired Lafond’s now-wife, Rachel, during their time at Publicis. Shortly after she started, Rancourt commented on her engagement ring and asked, “What’s with the ring on your finger? 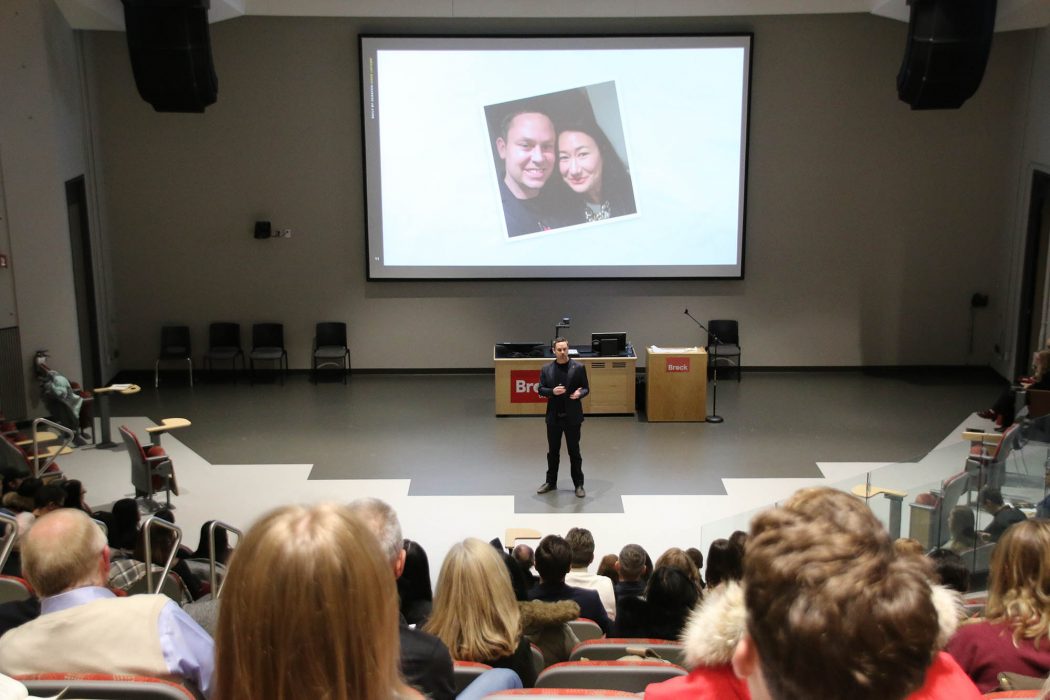 She said she was engaged to a man named Michael, and Rancourt said, “You’re going to marry Dave Lafond.”

Sure enough, he was right.

“I got the ring off her finger and we got married and had a kid within a year,” said Lafond.

It was another twist that landed him exactly where he wanted to be.

Lafond joined the multinational advertising and public relations company Publicis in 2001. In 2007, he launched Publicis Modem, a digital agency which grew to a team of more than 120.

In 2011, he became president of Proximity/BBDO Canada, and in 2013, he joined Cossette, one of Canada’s largest independent agencies, as president of English Canada. In 2016, Lafond launched No Fixed Address with CEO and Co-Founder Serge Rancourt.

“Getting started is hard,” said Lafond. “Going linear isn’t part of the process. If I reach a couple students like me that were super lost, that would be success for me. I remember when I was young in university, I had no career path. I graduated without a job. You don’t know where your journey’s going to take you.” 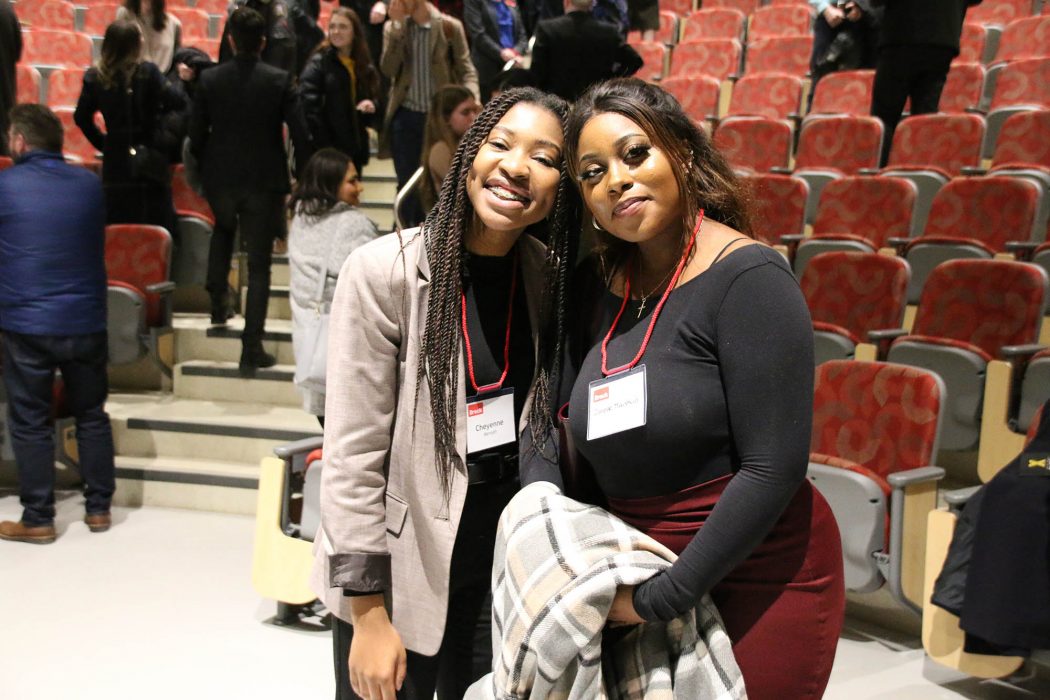 Mensah ended up sharing snippets of her life story with Lafond, captivating him.

“I was born in Ghana and moved to Germany when I was two to live with my grandparents,” said Mensah. “I grew up being more rooted within German culture than I did in my own African culture, so when I left around six and came to Canada, I was on and off between Canada and Germany.”

Mensah said adapting to Canadian culture was difficult for the first few years, but it’s a triumph woven into her journey.

Her and Marshall’s project, Bright Blue, was a yearlong campaign to get Canadians aged 18 to 24 cleaning shorelines. The pair used social media and influencers, as well as post-secondary advocates, to get involved and inspire others to participate in cleaning shorelines.

During Lafond’s address, he talked about Mensah‘s inspiring story — now woven into his own.

Mensah said the unexpected attention was both “amazing and scary.”

“After the initial fear went away, I was like, ‘Wow, he remembers the stuff we talked about,'” said Mensah. “I felt important. He really didn’t have to bring me up in his keynote speech, but now, my story is part of his.”