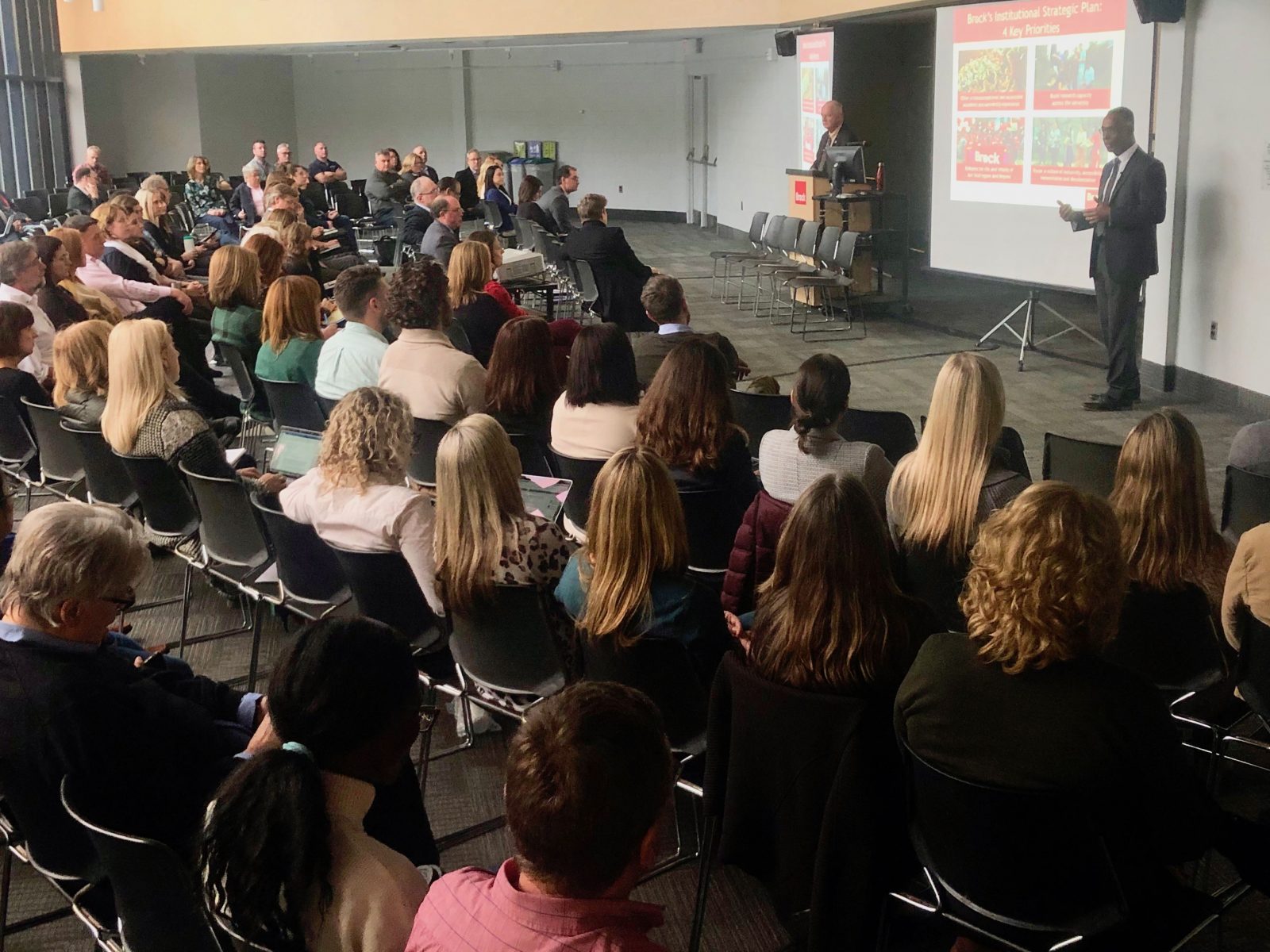 About 300 faculty and staff attended Town Hall meetings in Pond Inlet on Nov. 18 and 19, or logged on to watch the livestream, as members of Brock’s senior administration offered an economic update on the University, spoke of progress in pursuing Brock’s Strategic Plan, and anticipated challenges that will need to be addressed in the months and years ahead.

In January 2019, the Ontario government announced sweeping changes to university funding, as part of efforts to address concerns about the province’s finances.

For Brock and all post-secondary institutions across Ontario, the biggest challenge has been protecting their academic mission while balancing the budget in the face of a 10-per-cent tuition cut that was part of the government’s measures. The reduced tuition revenues remain frozen for 2020-21.

Provost Greg Finn said that, for the current 2019-20 budget, this Fall’s record enrolment helped Brock craft a framework of efficiencies, spending cuts or delayed capital expenditures and deferred maintenance, offsetting the brunt of $15.4-million in expected operating revenues that were wiped out by the tuition cut as well as grant reductions.  While final headcounts are still being audited, figures shown in the Town Hall put total enrolment this Fall at 19,867, which is 465 more students than had been forecast.

Next year, however, the challenge gets steeper in fiscal 2020-21, when the tuition cut would have the effect of a $19.6-million revenue loss on Brock’s operating budget if no mitigating steps were taken, and if Brock had not begun taking action soon after last January’s announcement.

Officials will be scrutinizing a range of revenue-generating options such as new programs, improved retention and increased enrolment, in combination with cost-saving tactics such as deferred hirings, slower debt repayment, reduced travel and conference costs, and other measures.

President Gervan Fearon said senior staff will continue consulting with the Brock community to identify all options that can help offset the cuts. He said the collective effort toward balancing the budget will be built around “engaged decision-making” principles that are guided by a desire to avoid job losses; finding a balance between generating new revenues and reducing expenses; and protecting the University’s student focus and strategic priorities.

The Brock community is also invited to share any suggestions or ideas for addressing budget challenges. They can be emailed to Engagement2020@brocku.ca