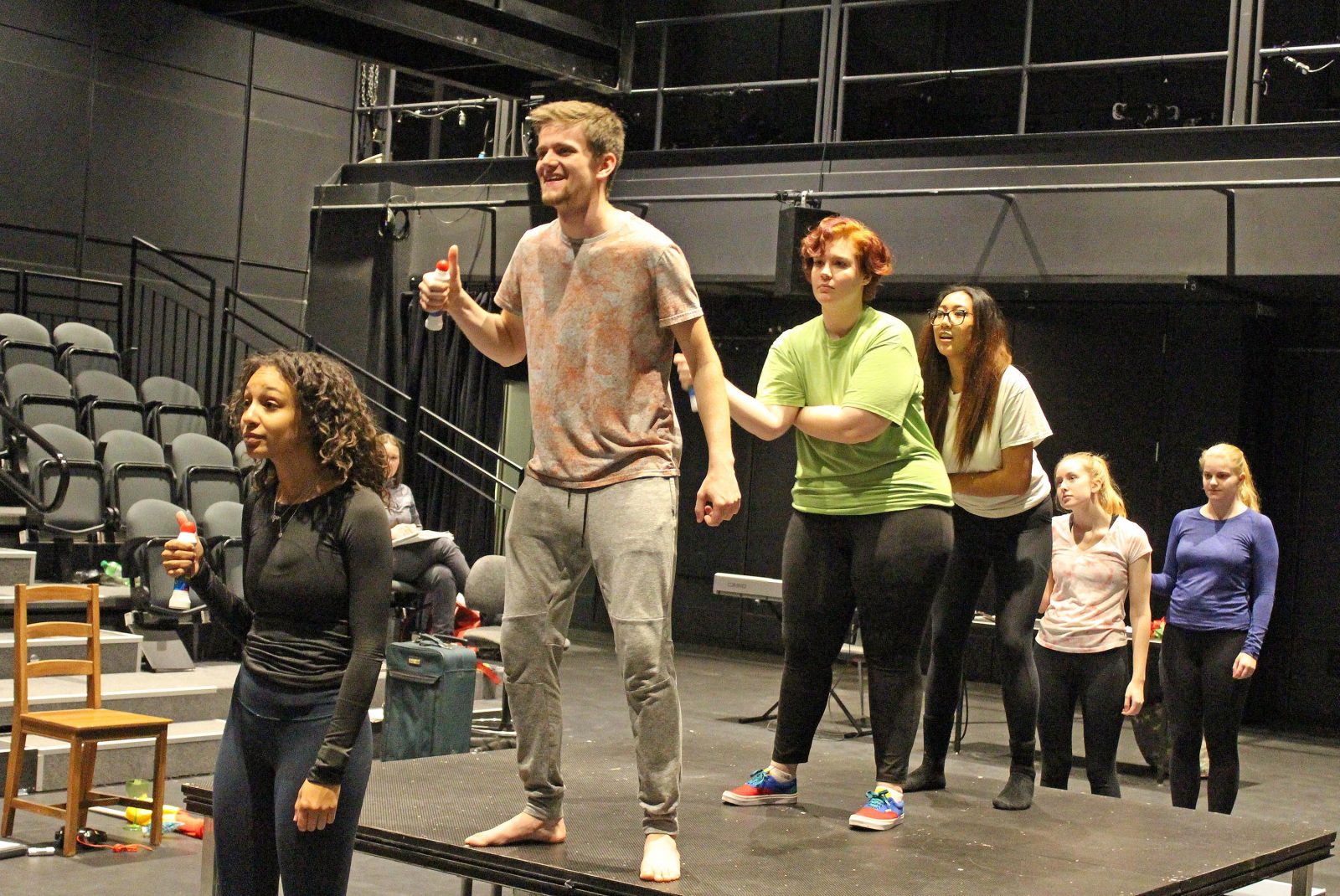 Brock students from the fourth-year Advanced Studies in Theatre course rehearse for their upcoming performance of Love and Information, opening Nov. 29 at the Marilyn I. Walker Theatre.

A fourth-year Dramatic Arts class from Brock University’s Marilyn I. Walker School of Fine and Performing Arts is putting its spin on the Caryl Churchill production Love and Information.

Opening on Friday, Nov. 29 at the Marilyn I. Walker Theatre in downtown St. Catharines, Love and Information examines relationships in a world of excess and access, where fragmented individuals struggle to connect despite having everything at their fingertips.

The show is produced by Studio Taxi Theatre, run by students in the Advanced Studies in Theatre course, and is part of the MIWSFPA’s mandate to contribute to regional cultural development and build community connections.

Through more than 100 characters in 60 scenes, the production looks at how love and information impacts their lives and relationships. The play moves from one scene to the next with rapid dexterity, as if the audience was flipping through the channels on a television. Viewers catch snippets of real human beings in the heart of conflicts, connection and catastrophe.

Dramatic Arts Professor Mike Griffin, who directs the performance, says Love and Information is an exciting show because of how it structurally and thematically reflects today’s society.

“Churchill comments on what it is like to be in the ‘swipe’ generation, constantly switching from app to app, staying connected as long as the entertainment lasts,” he says. “The play examines how information affects our relationships.”

Griffin calls Churchill one of the most dynamic playwrights alive, paving the way to experiment with form and content. Her plays often challenge societal ideals and abuses of power, and her writing explores unconventional structures. Love and Information was first produced in 2012 at the Royal Court Theatre in London, U.K., directed by James MacDonald, and has since then met incredible success with productions across the world.

Churchill’s script gives theatre companies the flexibility to shuffle the order of the scenes, allowing the artists to makes strong choices about how to shape the production. It means no two versions of the play will ever be the same. The stage is set up in alley-style seating, with audiences on either side of the stage and actors in the middle, providing for an intimate engagement.

Director of the MIWSFPA David Vivian said student productions like this one set the Dramatic Art students up for a successful career in the arts.

“The DART 4F56 course is a capstone experiential education-oriented course that often serves as a launching pad for the post-graduation founding of new companies and projects of creative research and theatre production in Niagara and the GTA,” he said. “Students build, produce, perform, direct, dramaturge and market these original events.  It sets them up to be highly qualified to work for a theatre or production company, and gives them the confidence to launch their own projects.”

The show is suitable for ages 10 and over. Tickets are $5 and are available through Brock University’s ticket hub online at brocku.universitytickets.com