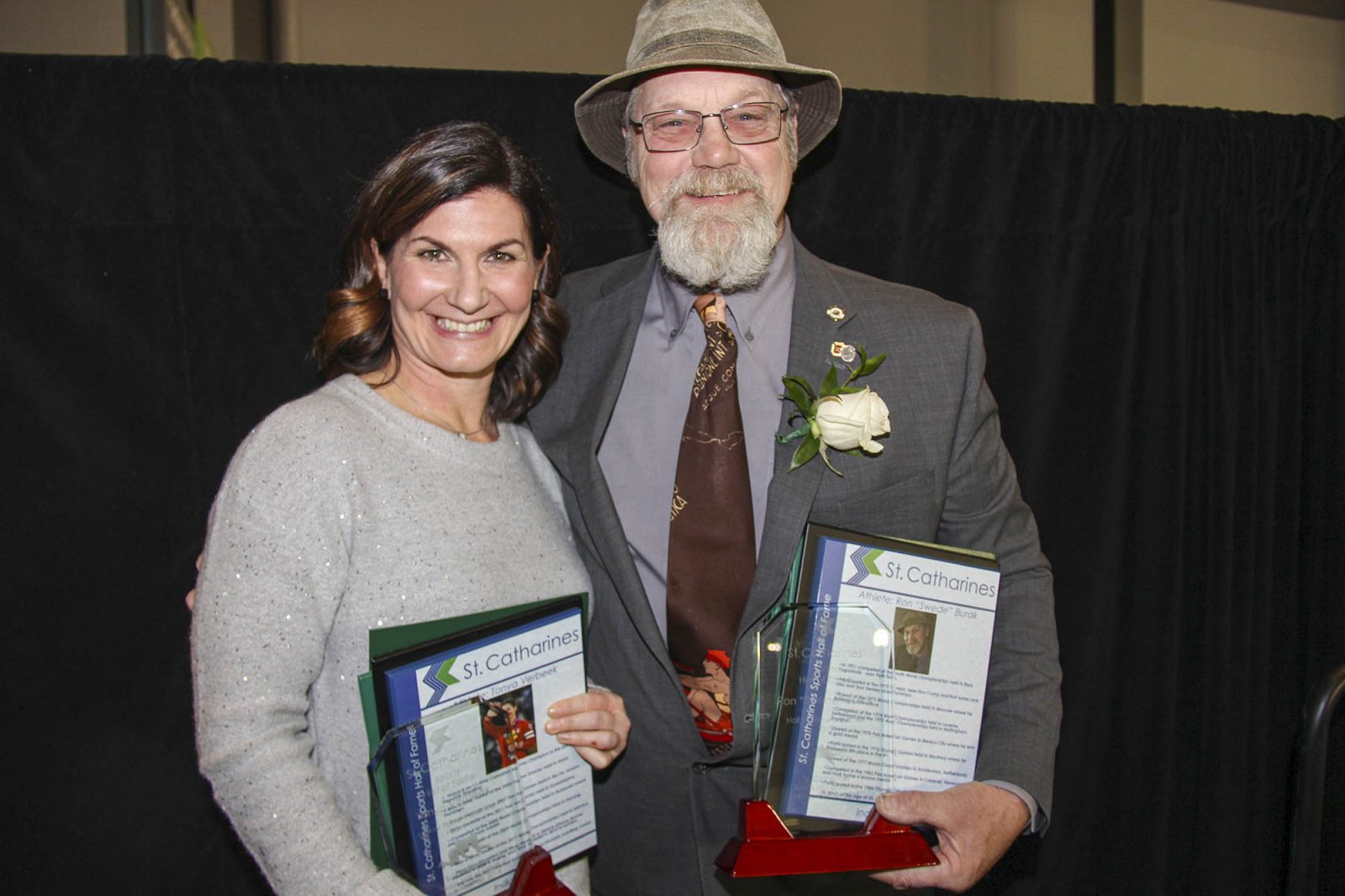 From left to right, Brock graduates and Olympians Tonya Verbeek (wrestling) and Ron ‘Swede’ Burak (rowing) had their names added to the David S. Howes St. Catharines Sports Wall of Fame at the Meridian Centre on Wednesday. Photo by the City of St. Catharines.

A pair of highly-decorated Brock Badgers were inducted into the St. Catharines Sports Hall of Fame on Nov. 20.

Olympians Tonya Verbeek (wrestling) and Ron ‘Swede’ Burak (rowing) were among five inductees at the ceremony to have their names added to the David S. Howes St. Catharines Sports Wall of Fame at the Meridian Centre on Wednesday.

The event serves to celebrate athletes and builders who have competed at the top of their sports or significantly contributed to the development of sport in St. Catharines. To be eligible for the hall of fame, candidates must have been born or raised in St. Catharines or lived in the city during their sporting career.

“The inductees we are recognizing this year have all had either remarkable achievements as athletes, or as builders, shining a positive light on our city and helping put St. Catharines on the map when it comes to world-class sports,” said Peter Partridge Jr., hall of fame chair. “We’re extremely proud of the class of 2019 and their connections to our community.” 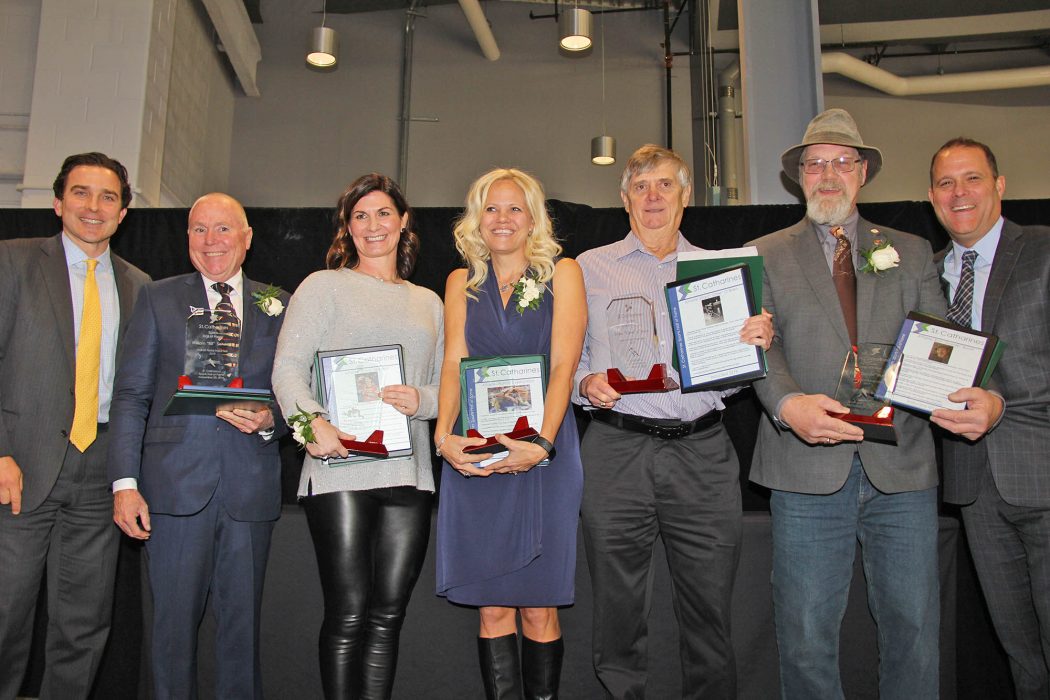 She is a three-time Olympian and three-time freestyle wrestling 55-kilogram medalist. At Brock, she majored in Recreation and Leisure Studies, Preservice Education J/I, and Education (General-Integrated Studies), respectively.

An 11-time national champion, Verbeek graduated from Brock with a Master of Education.

She captured an Olympic silver medal in the 55kg weight class in Athens in 2004, which was Canada’s first-ever Olympic medalist in women’s wrestling.

At the 2008 Beijing Games, Verbeek won a bronze medal in the same weight class and then secured silver at 2012 London.

Verbeek also won silver at the Pan American Games in Guadalajara during 2011 to add to the bronze medal that she won in 2007 in Rio de Janeiro. Verbeek holds two bronze medals from the World Championships in 2005 and 2009 and a 2010 Commonwealth Games silver.

Verbeek served as Wrestling Canada Lutte’s talent identification coach from 2013 to 2017 and is currently their international coach.

“Tonya was always a natural athlete and a competitive person,” said Calder. “She always had a fire and was successful at everything she did. But the truth is she almost quit at one point and debated for a long time if she was going to move on from wrestling.”

Verbeek was losing matches to opponents the coaching staff thought she was better than, according to Calder.

But then the Olympic opportunities came. Calder said the 2004 Olympic trials were a turning point for Verbeek.

“Tonya’s weakness ended up becoming her strength,” said Calder. “Her confidence became her forte. Tonya is a humble champion. She’s put the time in, covered all the facets of the sport as far of discipline, nutrition and commitment to prepare. Her ability to have so much success and still be grounded is incredible.”

Burak (BSM ’04) competed for Canada at the 1976 Summer Olympics in Montréal and helped Canada win gold at the Pan Am Games in Mexico City in 1975.

‘Swede,’ who joined Brock in 2003 to study Sport Management, currently serves as the lightweight women’s coach.

“Swede has brought huge amounts of energy to any rowing team or club that he is involved with,” said Brock rowing head coach Peter Somerwil. “Swede appreciates the support he got as an athlete from volunteers and works hard to give the same opportunities to the next generation.”

Swede started coaching with the Badgers’ novice program and was committed to getting everyone he could to enjoy the sport.

He moved up to coaching Brock’s junior varsity program and was focused on developing student-athletes with the goal of advancing them to the varsity team within the season.

In 2012, he was named Rowing Canada’s Male Coach of the Year.

Now, Burak is in charge of coaching the lightweight women’s program to once again help athletes reach their potential. He most recently played a key role as part of Liz Euiler’s development to becoming half of the pair representing the USA at Pan American Games.