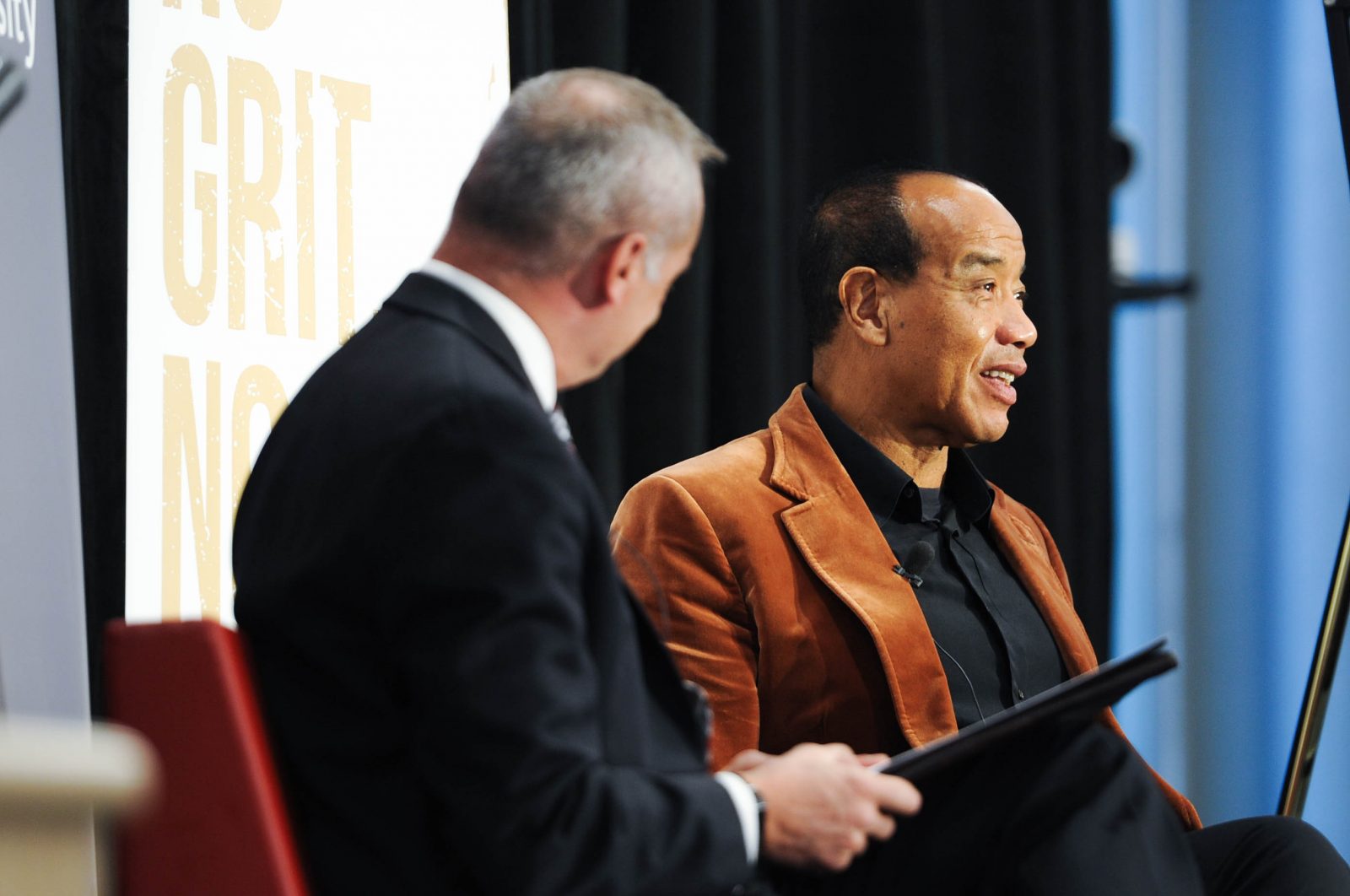 A walk to the marina in Michael Lee-Chin’s birth city of Port Antonio, Jamaica, put much into perspective for the business magnate and entrepreneur.

It was 20 years ago, and Lee-Chin, chairman of Portland Holdings and chairman and CEO of Mandeville Private Client Inc., was visiting his birth nation when he woke early one morning with energy to burn. He came upon a 30-year-old landscaper named John Shaw on his walk, and the two struck up a conversation.

Lee-Chin, who built a successful career in investing, learned that Shaw worked intermittently and didn’t have much to show for it. The Goodman School of Business 2019 Distinguished Leader realized the one edge he had over Shaw: his upbringing.

“John Shaw is from Port Antonio; I’m from Port Antonio. John Shaw doesn’t have much; my mother was an orphan who had me at 18,” Lee-Chin told a crowd of about 80 people during his closing statements at a fireside chat on campus Thursday, Oct. 24.

“What’s the difference between John Shaw and Michael Lee-Chin? I was blessed. I was blessed to have a mother who had absolute values and who led by example. She had high aspirations and expected a lot of me. I was blessed. Therefore, do I have responsibilities to people (like John Shaw)? I do. You cannot be an island of prosperity in a sea of poverty.”

That story was one of many Lee-Chin shared with the audience about his accomplishments and philosophies during the public discussion facilitated by Goodman Dean Andrew Gaudes. The event was supported by the Wilmot Foundation and is part of the D.G. Wilmot leader series.

Experiences including his encounter with Shaw have guided Lee-Chin’s philanthropic initiatives rooted in the idea of “doing well and doing good” as much as his prosperity in business. Under Portland Holdings, for example, companies must seek to improve the social well-being of the communities in which they operate.

Lee-Chin, who once earned $2.50 an hour as a bouncer at a McMaster University student pub, stressed to the audience the importance of “giving back to their community, their province and their country.”

That message highlighted why Lee-Chin was chosen as this year’s Distinguished Leader, Gaudes said afterward. Goodman’s mandate is to teach students to be both globally minded and connected to their local communities, he explained.

“The closing statements that were made really galvanized why he was here and why he is our Distinguished Leader,” Gaudes said. “Michael Lee-Chin is an excellent representative of what leaders should be.”

Before the fireside chat on Thursday, Lee-Chin took part in a roundtable with Goodman student leaders, including MBA students Puneet Rastogi and Feranmi Ogundeko.

The international students, from India and Nigeria respectively, said Lee-Chin’s story as an immigrant who built a storybook career in Canada resonated with them. Both intend to stay in Canada when they finish their studies.

During the roundtable, Lee-Chin conversed with students about the mistakes he’s made, his concept of the “inflection point,” the turning point at which success begets more success and the importance of perseverance.

“You learn the concepts in class, but to see someone who embodies them is really important,” Ogundeko said. “I feel like we should have more of this.”