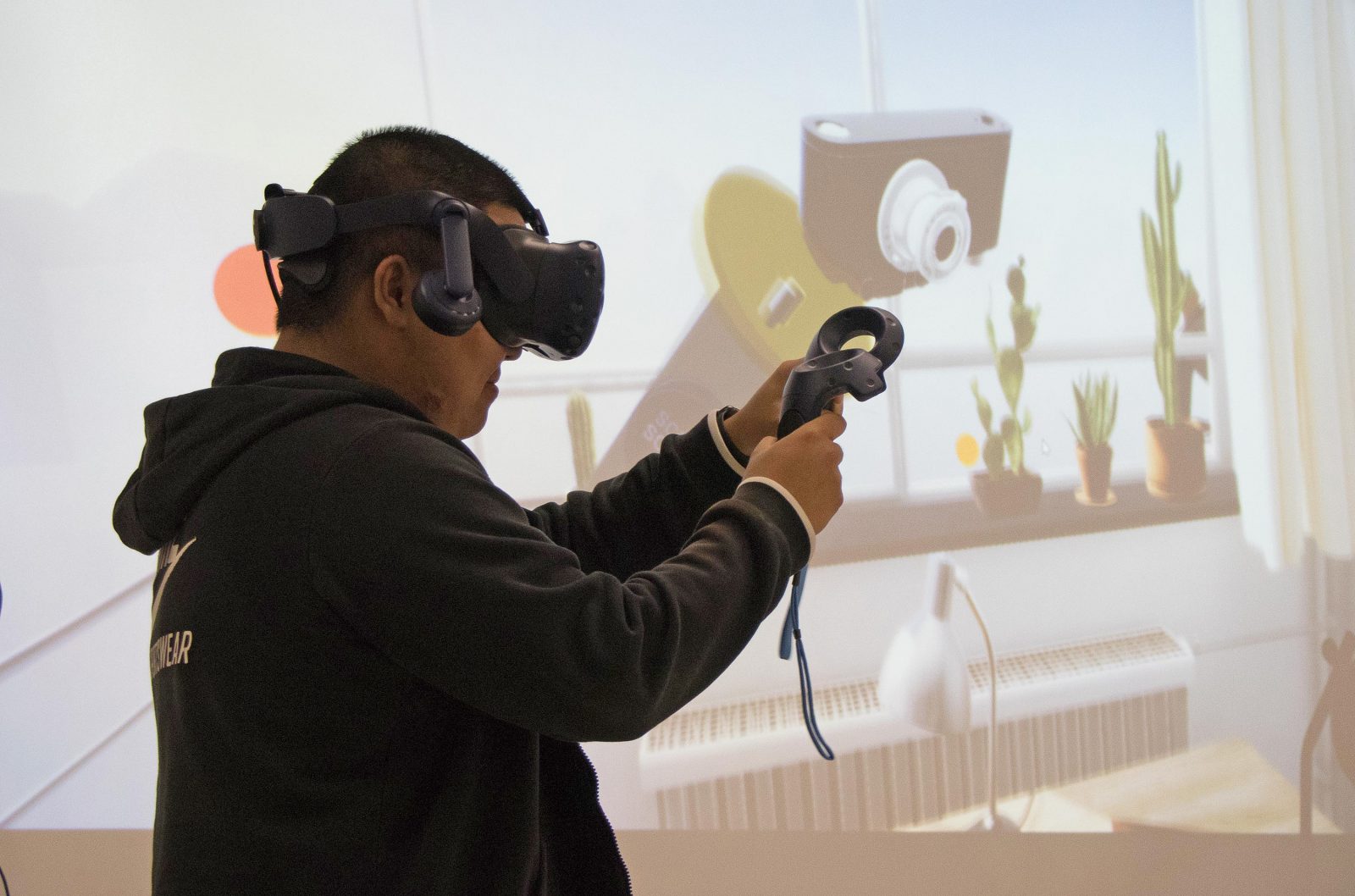 The Brock community is invited to experience the Bauhaus school in a special virtual reality exhibit. Here, fourth-year History student Bear Lyu examines a Leica camera in the school’s dormitory.

From the stacking chairs in seminar classrooms to the wayfinding signs in Market Hall to the glass walls of the new LINC space, the legacy of the Bauhaus design movement can be found across Brock University.

The Brock community can now experience the iconic German school of art, architecture and design thanks to virtual reality (VR) technology.

To celebrate the centenary year of Bauhaus school’s founding in 1919 by Walter Gropius, Germany’s Goethe-Institut has recreated the school building in VR. Visitors can wander through the building as it existed in Germany in 1925, exploring the school’s central ideas through its architecture, audio guide and period photographs.

The Bauhaus movement sought to bring together design aesthetics with mass manufacturing to make things accessible.

“Most of the stuff that Ikea designs is basically indebted to Bauhaus principles,” says Associate Professor of History Elizabeth Vlossak, who spearheaded the effort to bring the VR experience to students in her course on the history and culture of Germany’s Weimar Republic.

“The stacking tubular chair in particular is very Bauhaus, so the way students sit and learn is indebted to this particular style. The new LINC, too, is a tribute to Bauhaus to a certain extent because of how much glass is used.”

Founded in the German city of Weimar, the school relocated to Dessau and then Berlin before disbanding in 1933 under political pressure from Germany’s Nazi party. While some artists and architects stayed in Germany, others emigrated to Australia, Palestine and the United States, taking the Bauhaus principles and curriculum with them.

The Bauhaus movement would eventually give rise to the modern glass architecture and aesthetic of mass-produced goods we see today, having a profound influence on subsequent developments in product design, typography and graphic design in addition to art and architecture.

“They didn’t want to compromise on design and style, so they sought to create things that were functional and aesthetically pleasing,” says Vlossak. “Functionality is the aesthetic.”

One local example of Bauhaus architecture is St. Catharine’s Lapierre residence on Wood Dale Drive, built in 1960. The mid-century modern house was designed by local architect James E. Secord, who studied under Gropius at Harvard University. The house has received several prestigious awards and has been featured on HGTV and in the Globe and Mail.

The Virtual Bauhaus was created by the Goethe-Institut Boston in collaboration with the Cologne Game Lab, TH Köln. Brock is hosting this exhibition thanks to the generous support of the Brock Makerspace, Department of History, Centre for Digital Humanities, and Co-op, Career and Experiential Education.

Vlossak will be giving a free public talk on the culture of Weimar Germany at the St. Catharines Public Library Thursday, Oct. 10 at 7 p.m.