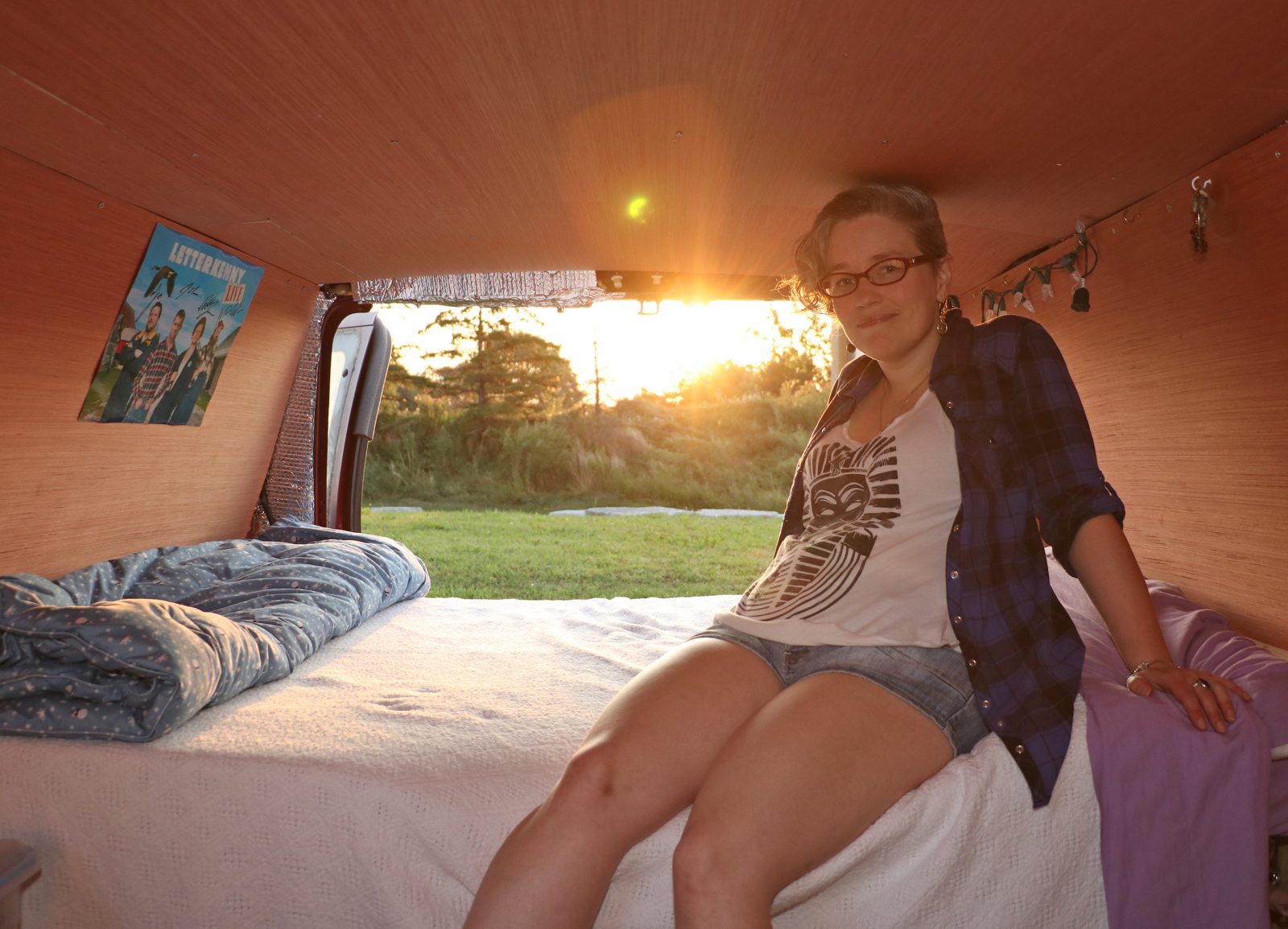 The St. Catharines native recently wrapped up her master’s thesis at Brock University studying the modern phenomenon of people choosing to live on the road.

Inspired by impossibly picturesque Instagram photos, the trend is seeing more and more people selling or storing their possessions, buying a camper van or retired school bus and hitting the road. They sleep for free in Walmart parking lots or wherever they can discreetly park their vehicles and see the world without the pull of monthly bills.

For Murray, the seeds of a nomadic lifestyle were planted more than a decade ago when she lost a high-paying job and had to go on welfare.

“It wasn’t even enough to cover my rent,” she said, looking back. “One day I looked out at the railroad tracks and thought, ‘what if I just hopped a train and rode it to wherever it’s going?’”

Ten months spent in South Korea during her undergrad at Brock fuelled the desire to be mobile even further.

After graduating with a Bachelor of Arts in History and Human Geography in 2016, Murray started a Master of Geography that fall. With funding from Brock and a Social Sciences and Humanities Research Council (SSHRC) grant, she purchased a used 2003 Ford cargo van on Kijiji, which she converted into a camper van named Lola.

Her master’s research involved a two-month trip to the U.S. in the summer of 2017, living out of the van and interviewing other nomads on what attracted them to the lifestyle. It was the first research of its kind.

“I knew there was a gap in academia that I could fill,” said Murray, whose final research thesis is titled Defining Freedom: An Ethnographic Study with American Vanlifers. “But if I wanted to truly study this culture, I needed to be able to live and move like they did.” 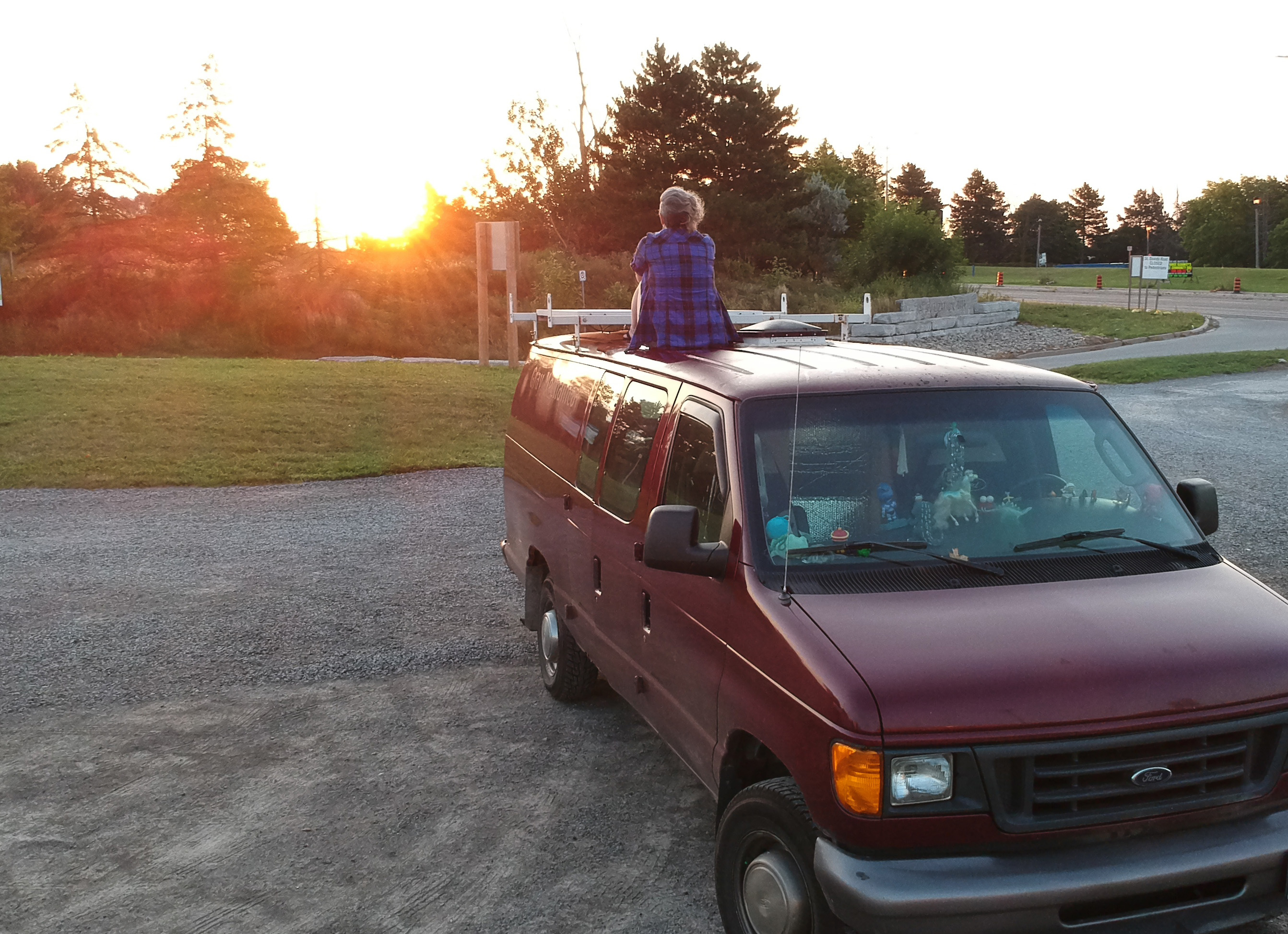 Stephanie Murray watches the sunrise from the roof of her 2003 Ford van, which she purchased and converted into a camper van named Lola.

The people Murray met were as diverse as the types of vehicles they drove.

“One of the couples I spoke to worked remotely in IT, another couple ran a blog and one of the other vanlifers was making money from a book he’d written. They’re a pretty talented bunch,” she said.

Murray was out to discover their motivation for giving up conventional lives and choosing this mobile lifestyle.

“Our society is oriented towards people who stay in one place, and van nomads help to call that way of thinking into question.

“I have encountered so much kindness on the road,” she said. “People have welcomed me into their homes and helped me with my van, with no expectation of anything in return. And while the vanlifers I interviewed took up this lifestyle for a variety of reasons, they were united by a desire to choose their own path, rather than the one that’s handed down to them.”

Murray discovered that van life is about slow mobility and choosing scenic roads over direct routes such as interstate highways.

“I asked what the difference is between tourism and this and they said their schedules aren’t based on hotels or finding places to eat,” she said. “Their travel is more open and less structured than tourists.”

Murray’s faculty supervisor and the graduate program director of Geography at Brock, David Butz, believed Murray’s research was novel and important, given today’s mobile society. He said Murray becoming a van nomad herself was pivotal.

“This strategy — and life choice — gives her research an unusually strong experiential and autobiographical component, which is rare in ‘mobilities’ research, and which adds to the distinctiveness and potential significance of her findings,” said Butz. “We also felt Stephanie’s unusual project, while logistically complicated, was worth supporting.”

Murray is grateful for the backing she received from Brock.

“This research changed the course of my life, and it showed me that it’s possible to turn your passion into a groundbreaking research project,” said Murray, who still calls Lola home.

She has discovered that the romanticism of the #VanLife culture, which many only see through Instagram, isn’t always the reality of life on the road.

“It does appear a lot more idyllic than it is,” she said. “A few of the vanlifers I interviewed talked about how Instagram makes it look so perfect. But if you look past that perfect photo, they’re often saying things like ‘my van broke down today, but look at the view.’”

Her research also taught her that a nomadic lifestyle isn’t for everyone.

“It takes a particular mindset to live in a van. People like their routines, they like to be comfortable,” she said. “There are times living in a van that you really call this way of living into question. But being in this community, it helps you realize you’re not crazy. It’s so reassuring to know this is a viable way of life.”

With her master’s thesis successfully defended, Murray will graduate in the fall, but she’s not done with van life just yet.

Knowing how expensive it can be to fix her own vehicle, Murray has enrolled in a diesel mechanic course at Fanshawe College for the fall.

“I’ve been debating upgrading to a small school bus,” she said. “I just can’t picture a life where I don’t have the option of picking up and going.”