NCO calls on public to submit documents for new archive 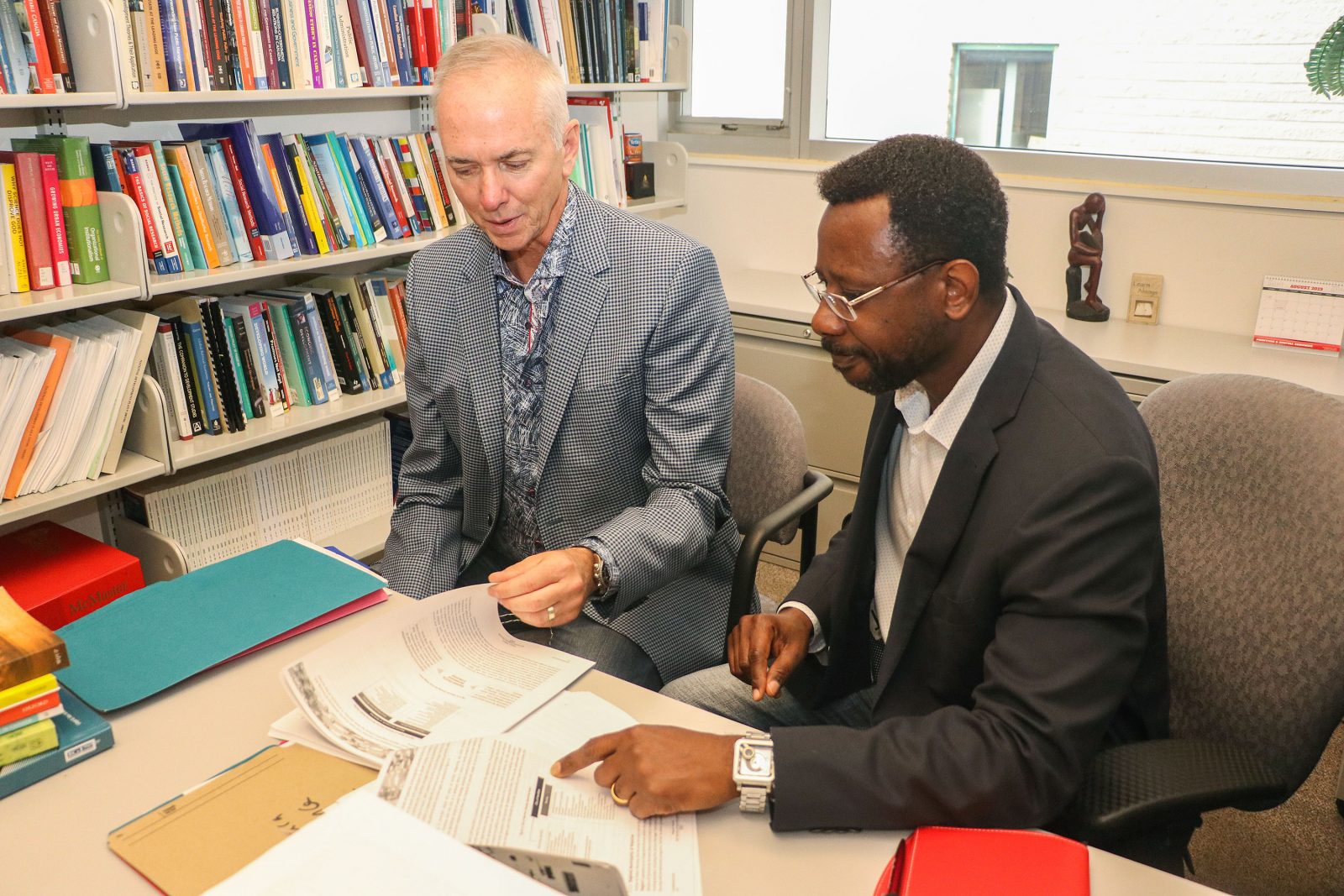 Thorold businessman Phil Ritchie and Niagara Community Observatory Director Charles Conteh look over documents to be added to a new depository being created by the NCO.

Thorold businessman Phil Ritchie is passionate about Niagara and its potential to be what he calls a “progressive region.”

But the founder and president of Keefer Developments Limited is frustrated by a challenge that he sees hindering progress: a mountain of useful reports, studies and other information that instead of being put to good use, is collecting dust on bookshelves and sitting idly on computers.

As a result, he says, information and ideas that have already been hashed out in these documents remain stuck out of the public eye. With the help of Brock’s Niagara Community Observatory (NCO), he hopes to see that change.

“We seem to consistently reinvent the conversation,” says Ritchie. “If you’re going to make progress as a region, you have to try and educate the populace as much as possible; that’s where the conversation is elevated.”

Out of his conviction that people in Niagara need access to documents in a range of sectors, Ritchie envisioned a centralized, searchable document depository for the community.

“This long-term library should be held by a neutral, credible party that is not related to somebody’s personal circumstances,” he says. “It should be a fair arbiter for all the information that comes in.”

Brock’s Niagara Community Observatory, which Ritchie has followed since its inception in 2009, sprang to mind as a fitting host for the depository, so he approached NCO Director Charles Conteh with the idea.

“Phil is quite a visionary,” says Conteh. “We had a conversation, and I said, ‘What you’re talking about speaks directly to the NCO’s mandate. Our goal is to provide a conduit to raise the bar on public conversation, so let us partner to build an architecture that will allow us to gather all the information out there.’”

With funding from Ritchie, the NCO hired a student to start collecting documents from Niagara Region and other places.

“All too often in all communities valuable work completed by many stakeholders is lost over time,” says Conteh. “Locating primary level reports in one accessible platform greatly furthers the objectives of public education and citizen engagement.”

Conteh says one-stop access to policy research over time allows governments, non-profit and private sectors to expand knowledge and insights already gained so that projects can advance beyond “ground zero.”

He says being based in a university and having expertise in information and knowledge management makes NCO the ideal “custodians” of the region’s documents.

To that end, the NCO is calling on the public to submit documents that have been publicly funded over the past 25 years, preferably in an electronic PDF version, although hard copies will be accepted.

Documents of interest could include:

“The NCO’s goal is to facilitate processes of grassroots collective decision-making,” he says. “Our goal is to raise the level of public consciousness by informing, educating and inspiring; that leads to an organic process in which the community will collectively shape its own destiny.”

He says most regions lack such a centralized “treasure-trove” of data and that Niagara could be a positive example for other regions to follow.