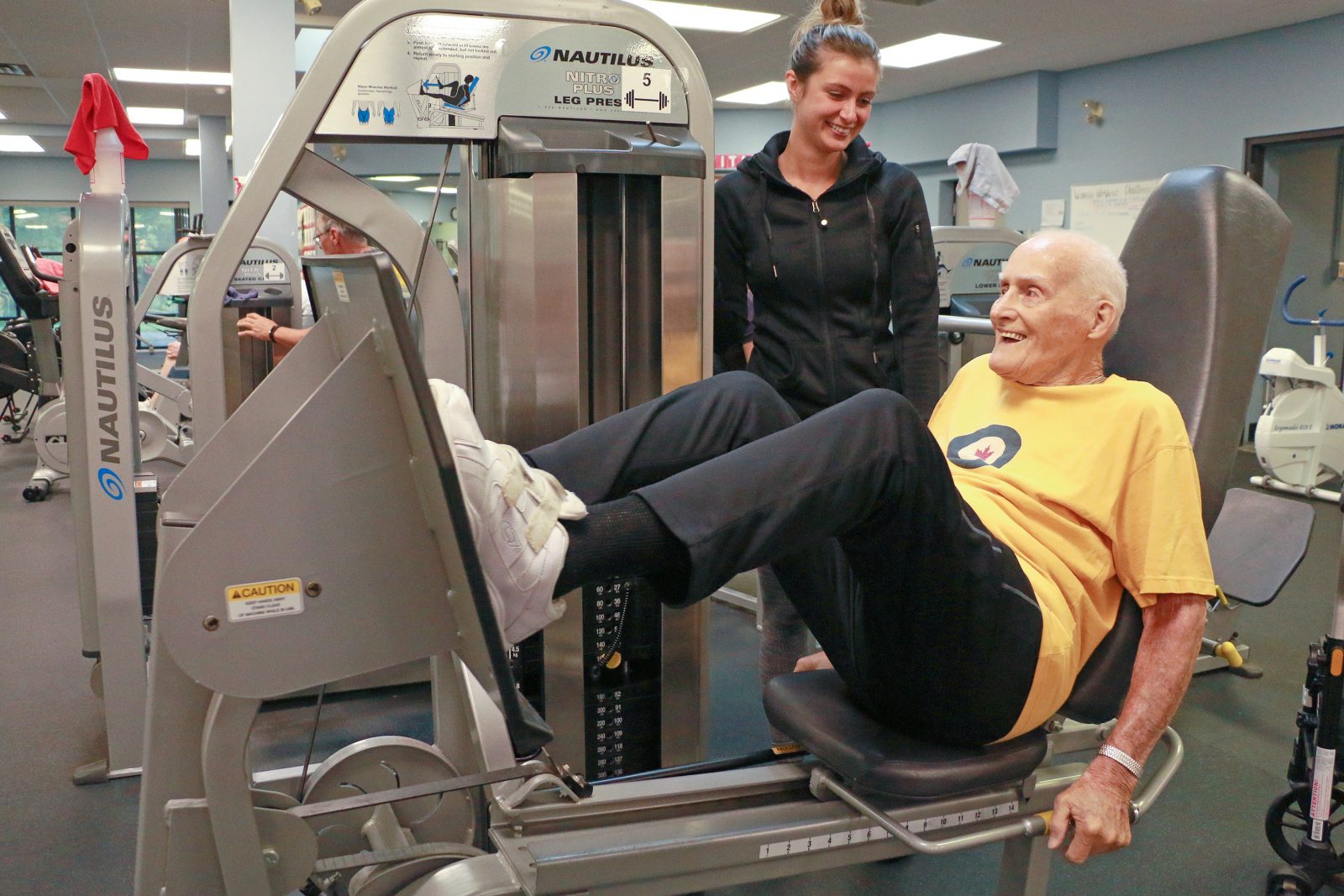 Brock-Niagara Centre for Health and Well-Being co-ordinator Katherine Crockett looks on as 99-year-old Chuck Page does a series of leg presses at the Lockhart Drive facility.

After routinely hitting the gym three times a week, Chuck Page has earned the right to have his cake and eat it too.

And that’s just what the regular at the Brock-Niagara Centre for Health and Well-Being was treated to when he celebrated his 99th birthday on Aug. 9.

Chuck, the centre’s oldest participant, blew out the candles, enjoyed a big slice of chocolate cake and then got back to breaking a sweat. 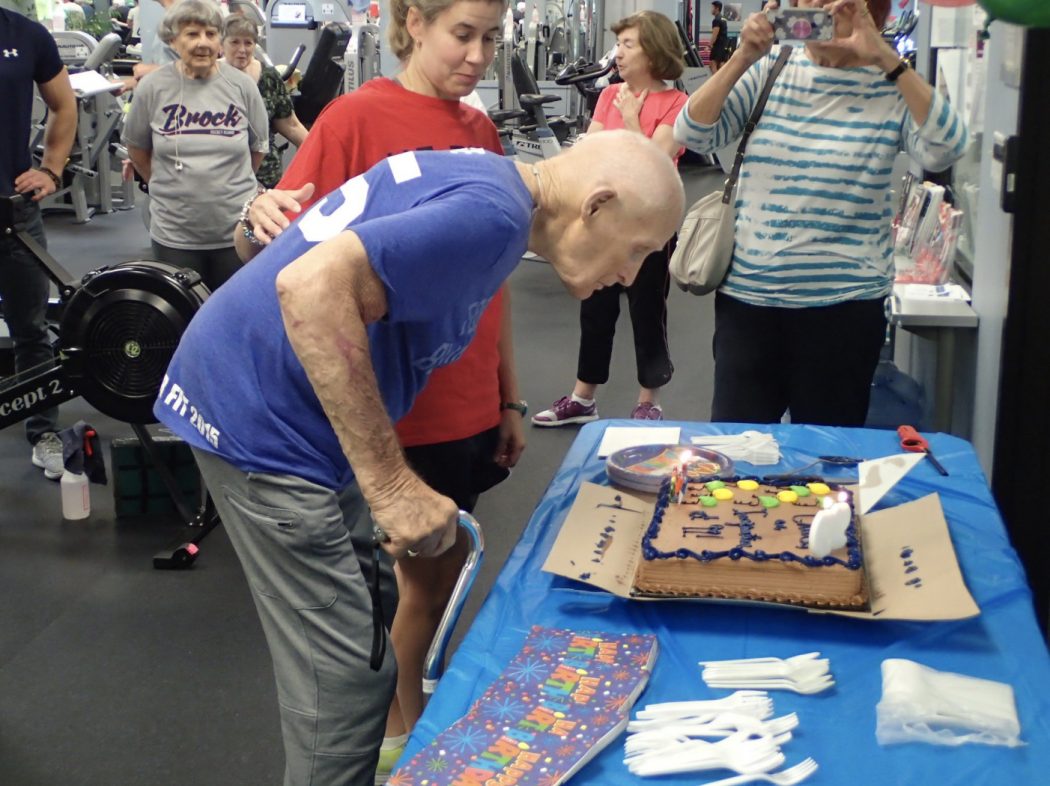 A photo of Chuck Page blowing out the candles on his 99th birthday cake has been viewed by more than 11,000 people after being posted to social media by granddaughter Jessica Page.

He’s never been one to miss a beat, said centre co-ordinator Katherine Crockett. Even when a hairline shoulder fracture kept him temporarily out of the gym earlier this year, he was determined to get back on the machines.

Chuck’s connection to Brock began 14 years ago when he saw a call in a local newspaper for participants in a University study. Associate Professor of Kinesiology Kim Gammage was evaluating whether exercise could improve balance in seniors and Chuck, who was doing no exercise other than walking at the time, was intrigued by the concept.

He signed up, saw the study through and has been a regular at the gym ever since.

The St. Catharines resident has been a real inspiration for other clients at the centre, Katherine said.

“So many of them say, ‘I hope I’m still working out and doing chest presses at 99,’” she said. “It’s great motivation.”

Chuck believes his exercise routine has played a big role in his health as he approached his later years.

“I think that’s why I’m 99 and still going,” he said. “Even a little bit of exercise makes a big difference as you age.”

His granddaughter, orthopedic surgeon Dr. Jessica Page, has been using his story and connection to Brock to help motivate her own clients in Lethbridge, Alta.

“Many patients have excuses as to why it’s too difficult: ‘My joints are too sore,’ ‘I don’t have enough time,’ or ‘it’s hard to get around,’” she said. “I think my grandpa is a good example of how those barriers can be overcome and what the benefits are if you can overcome them.

“There’s good evidence that 150 minutes of exercise a week for adults, with at least two days of strength training, has effects on cardiovascular disease risks, cancer risks and overall mortality.” 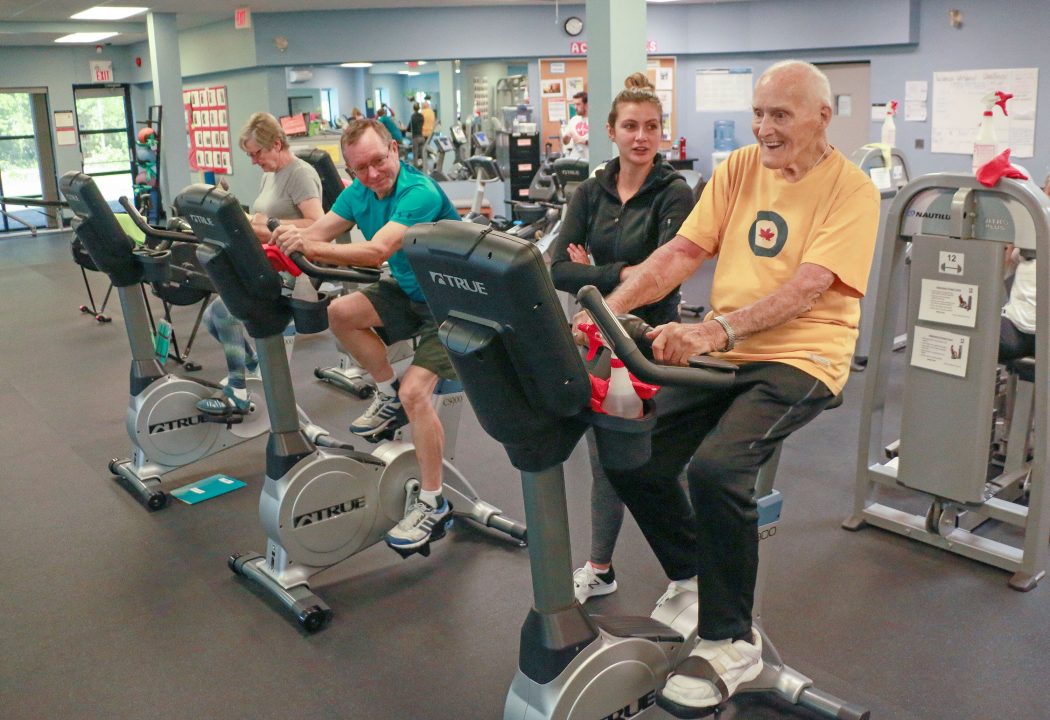 Chuck Page, 99, works out at the Brock-Niagara Centre for Health and Well-Being alongside his son Rick Page, left, and centre co-ordinator Katherine Crockett, centre.

Jessica shared a photo of her grandfather blowing out his candle on Twitter to help get the #medicinethroughmovement message out into the world and it has been viewed by more than 11,000 people.

Even Chuck’s own son has been moved by his gym journey.

“He’s an inspiration,” said Rick Page, who has also begun working out at the centre during a month-long visit from B.C.

“I had to come in and watch his routine first to make sure I could keep up,” the 65-year-old quipped.

Chuck is happy to be able to offer a bit of encouragement to get people moving.

“Sometimes all they need is a little motivation and then they take off and are glad they got started,” he said. “That’s the hard part, getting started.”

Working out at the Brock-Niagara Centre for Health and Well-Being, which allows seniors to use the space for a minimal membership fee, offers more than physical benefits, Katherine said.

“It’s the social aspect of it as well. A lot of people who come here live alone or only with their spouse, so this gives them a space to come and socialize.”

For more information on the centre and its available programs, visit brocku.ca/health-well-being