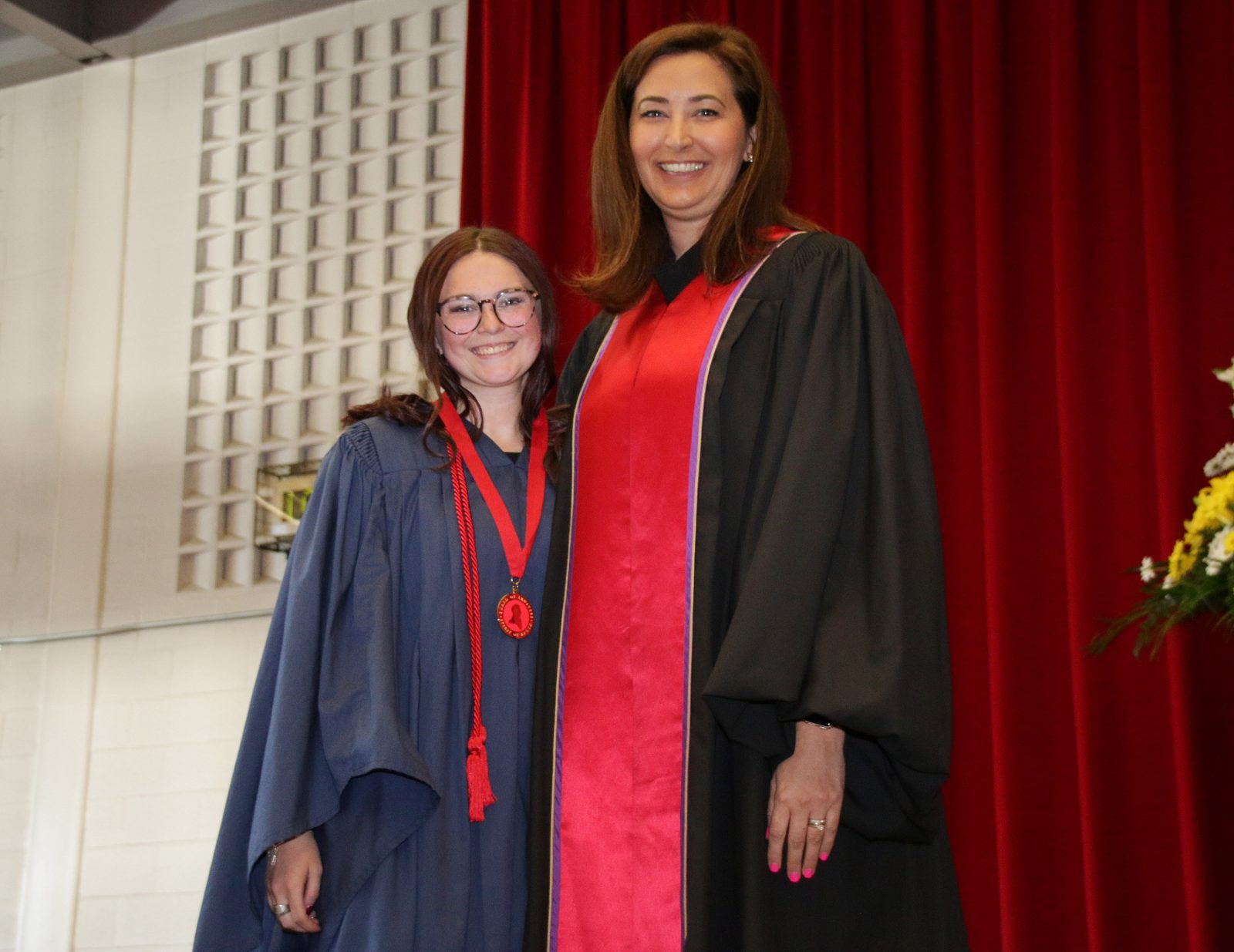 Grayson Wadsworth-Hayes was awarded the Spirit of Brock Medal from Board of Trustees representative Leanne Standryk during Tuesday's Social Sciences Convocation ceremony.

Grayson Wadsworth-Hayes was only seven years old when she started coming to Brock University’s summer camps. The 21-year-old St. Catharines native crossed the Convocation stage on Tuesday, June 11 to receive her degree in Child and Youth Studies (CHYS), and she returned to the stage to accept the Faculty of Social Sciences Spirit of Brock medal.

Spirit of Brock medals are awarded to students in each Faculty who best exemplify the spirit of Maj.-Gen. Sir Isaac Brock, demonstrating leadership, courage, innovation, inspiration, and community involvement.

After being a participant in Brock’s Youth University, Wadsworth-Hayes started volunteering with junior camps, developing crucial leadership skills. In the first year of her time as an undergraduate student at Brock, she was hired as a staff member, helping with field trips, enrichment programs and summer camps.

Wadsworth-Hayes said the close-knit community and lifelong friends she made in her Youth University job helped her succeed as she progressed into the third and fourth years of her degree.

“We shared many game nights, themed parties and camp shenanigans,” she said with a laugh.

“Grayson’s influence impacts hundreds of elementary school-aged youth annually here at Brock,” said Michelle Leone, Program Manager of Youth Programs. “Her contagious energy and positive spirit inspires and motivates the young people around her to be their best selves.”

Throughout her time in CHYS, Wadsworth-Hayes came to know and trust academic advisor, Alison Lahn.

“I will be forever grateful for the impact Alison had on my success at Brock,” Wadsworth-Hayes said.

This year, Wadsworth-Hayes served as Vice-President of the CHYS Association, an organization intended to help students make connections within the University and the Niagara community.

“My teamwork and affiliation with this club allowed me to make countless connections with people both in my programs, as well as with the departmental staff,” she said. “All of that helped make my final year extremely positive.”

Capping off the final year of her undergraduate degree, she contributed to a surprise victory for Brock’s Collegiate Leadership Competition Team. 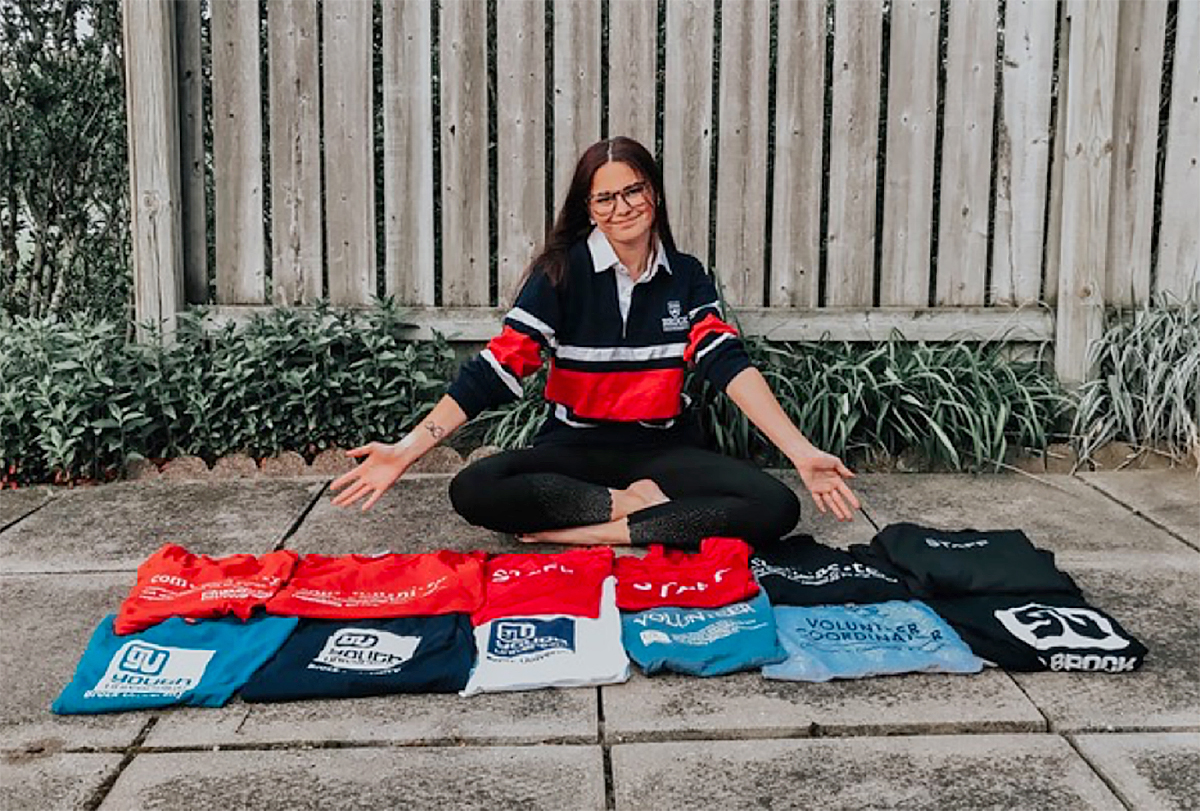 Grayson Wadsworth-Hayes with all of her Youth University T-shirts from over the years.

“Community involvement is a big piece of life at Brock,” said Wadsworth-Hayes, a volunteer in the supervised visitation program at Pathstone Mental Health Services. The program provides families a safe space for their court appointed visits with their children.

“Being a child of divorced parents, it is important to me to figure out my feelings surrounding the subject, and to help children who need the same help that I did,” she said. “It has been so rewarding for me personally and in my studies. It really got me interested in child mental health and, totally unexpectedly, children’s law.”

Professor Richard Mitchell, who worked closely with Wadsworth-Hayes as her honours thesis supervisor, said students like Wadsworth-Hayes remind him why he enjoys teaching.

“Through her numerous achievements in our department, on campus, and in the wider Niagara community, she epitomizes the Spirit of Brock Award’s key characteristics of inspired leadership, community-minded critical thinking, and global citizenship,” Mitchell said.

Wadsworth-Hayes encourages other students to get involved in the extracurricular opportunities Brock offers.

After spending some time living in England as a Brock ambassador, she said the opportunity was a pivotal moment in her life where she gained “friendships, self-confidence and a ton of self-discovery.”

Wadsworth-Hayes will continue her time at Brock this Fall when she starts a master’s degree in Child and Youth Studies.