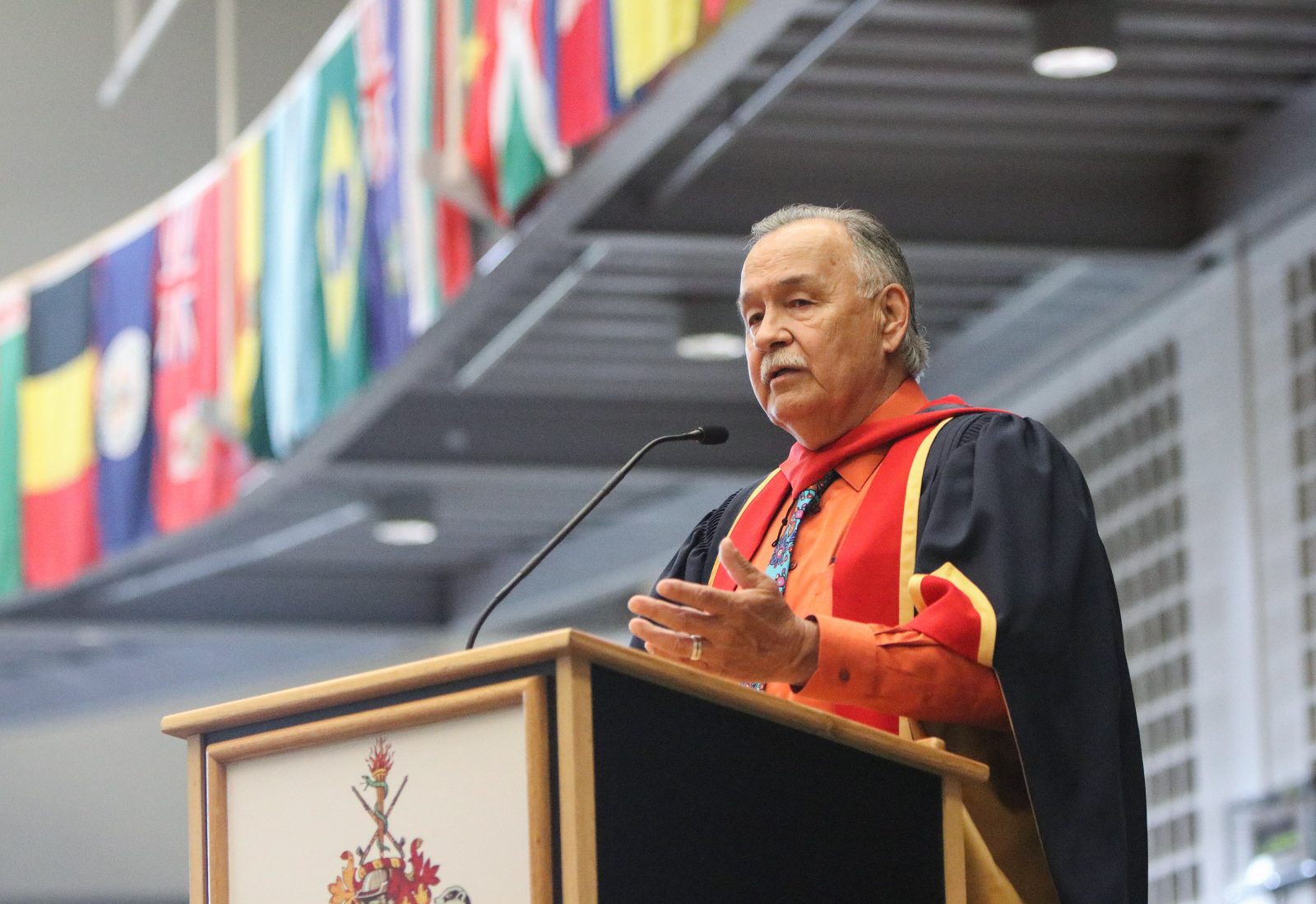 NHL legend Reggie Leach was awarded an honorary degree from Brock University and delivered the address to students during the first day of Brock’s Spring Convocation on Monday, June 10.

With a Stanley Cup ring on his finger and a Philadelphia Flyers-coloured orange shirt under his ceremonial graduation robe, the Riverton Rifle was awarded an honorary doctorate from Brock University Monday, June 10.

But it was as much for what he has done for Indigenous youth since retiring from his record-setting hockey career that earned Reggie Leach the honorary degree from Brock. 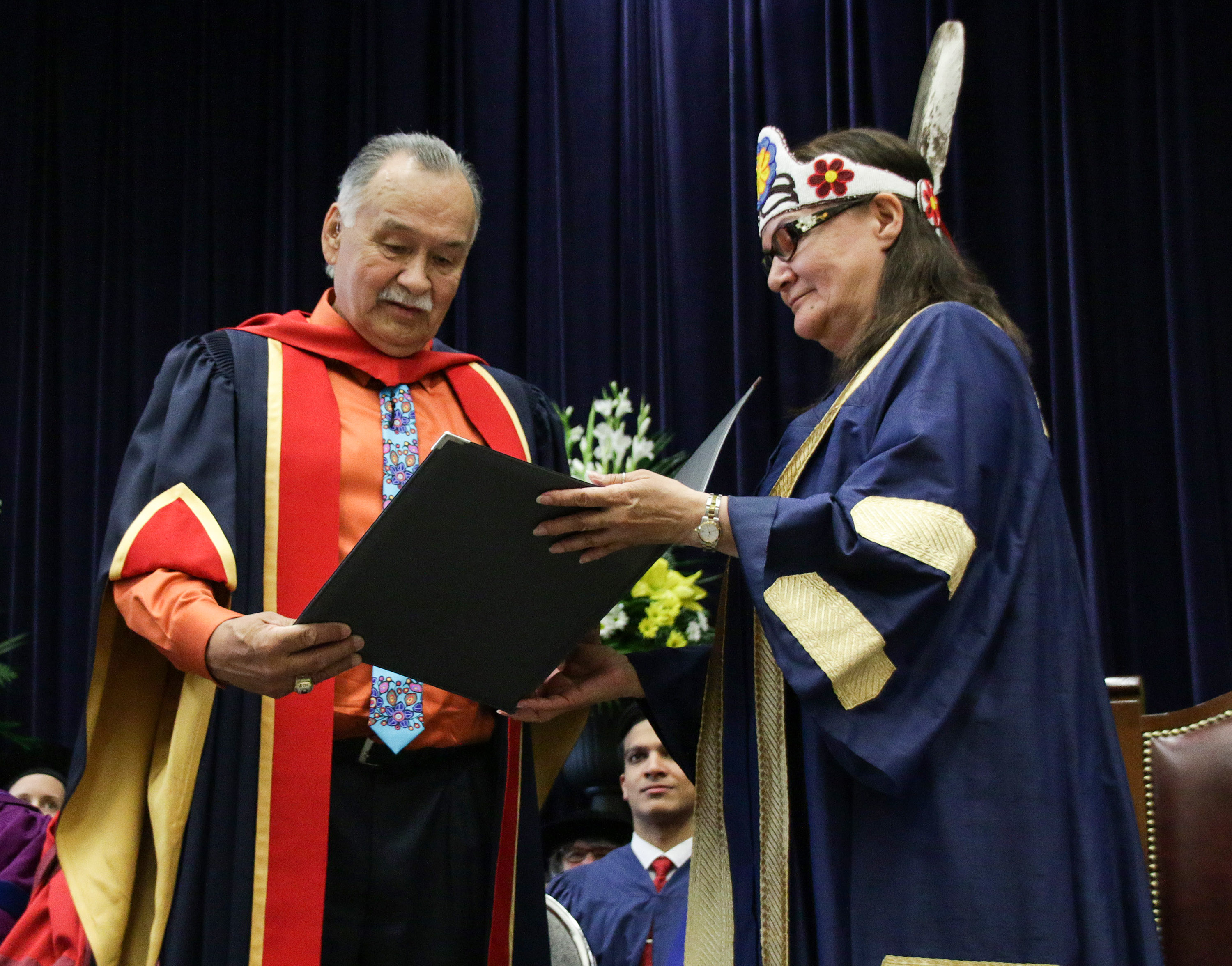 Leach, who is of Ojibwe descent and a member of Berens River First Nation in Manitoba, now lives on Manitoulin Island, where he has become friends with Brock Chancellor Shirley Cheechoo. It was an emotional Cheechoo who awarded Leach with the Doctor of Laws degree.

“He has worked so hard,” she said. “When a person starts at a very young age like he did, it’s overwhelming to know that a child can progress like that. It will help me in my work to know that these kids I work with have so much potential. He represents that.”

Saying he feels like the ‘luckiest guy in the world,’ Leach said it was a huge honour to receive the doctorate.

“It makes my heart happy because I’m being recognized for the work that I love to do,” he said. “This means even more to me now because I’ve seen these young people graduating and I see the atmosphere.”

As a member of the dominant Philadelphia Flyers squad in the late 1970s, Leach was a potent goal scorer and earned the Riverton Rifle moniker for having one of the hardest shots in the history of the National Hockey League.

He helped the Flyers win their second-straight Stanley Cup title in 1975, and earned the playoff MVP honour a year later when he set Philadelphia’s all-time single-season scoring record of 61 goals, a mark that still remains today.

Leach now works with Indigenous youth, encouraging them to make wise life decisions and take responsibility for their actions. It was a message he also conveyed to the graduating Brock students Monday during his Convocation address.

“My goal in life is that I want every young person to be successful,” said Leach, who was named to the Order of Manitoba in 2016. “Your life is just starting. It’s up to you to decide what you want your life to be. Whatever choices you make, you own those choices, good or bad.” 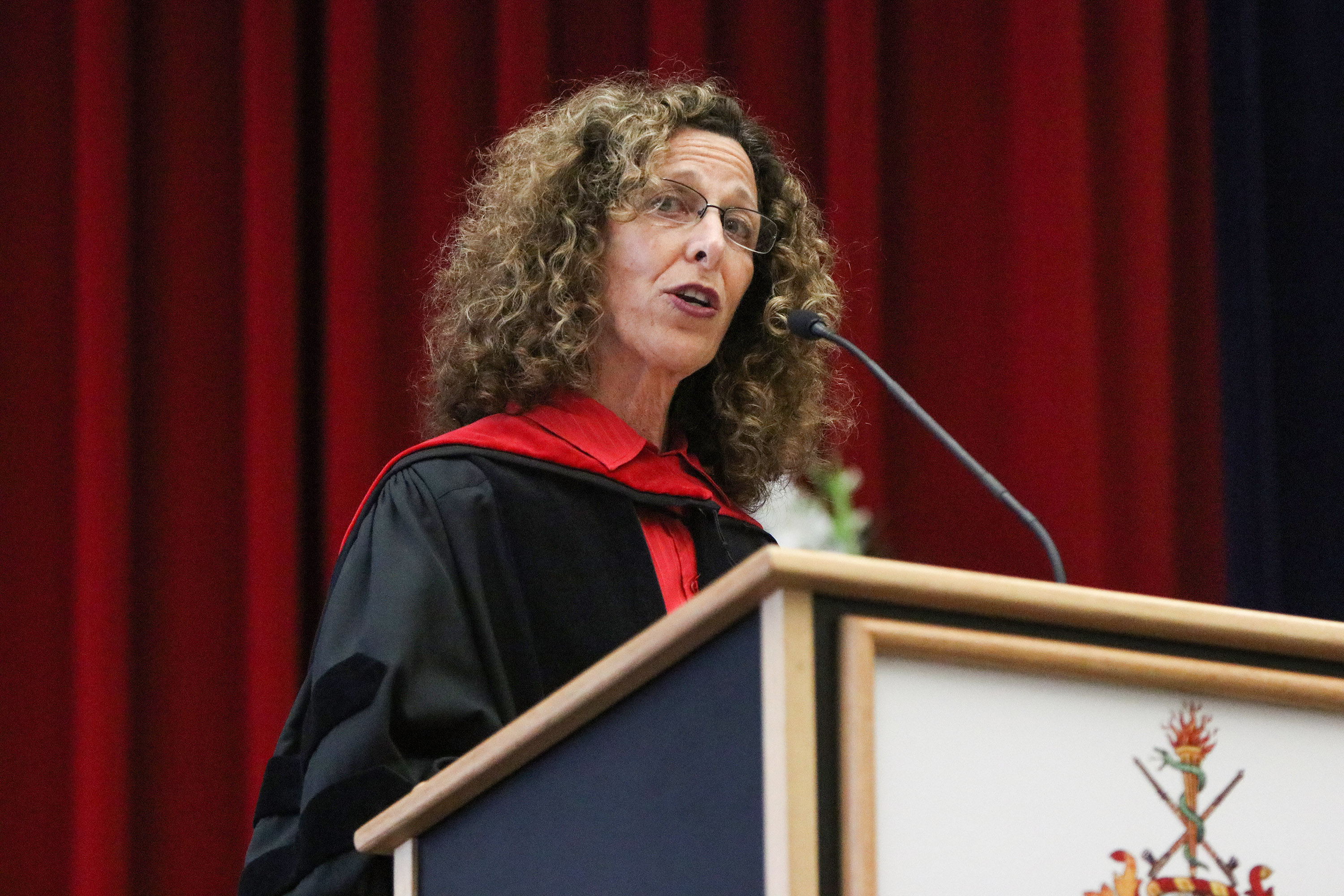 Throughout his career, and even today, Leach has never forgotten the support he got from the 500-resident community of Riverton, Manitoba. He encouraged the graduates to do the same.

“Never forget who supported you to get to University,” he said. “I grew up in a First Nations family among a community of people from all different nations, but they all supported me. I still support the town today because of what they did for me when I was 10, 11 and 12 years old. You never forget that.”

Leach’s address came during the first of nine Spring Convocations taking place at Brock’s Ian Beddis Gymnasium this week. Monday’s morning and afternoon ceremonies were for students in the Faculty of Health Sciences. Delivering the afternoon Convocation address was Professor of Kinesiology Bareket Falk, recipient of the Faculty of Applied Health Sciences Research Excellence Award.

“You have worked very hard for your education,” she told the graduands. “”No matter what path you decide to take with your education, it is yours to keep. You should be proud. Your education will open many doors. Take advantage of the opportunities that come your way, even if that means changing your envisioned path.

All of the Convocation ceremonies are free to attend and no tickets are required. Parking is free for guests throughout the week. Free Wi-Fi is also being provided to guests throughout Convocation week. The BrockEvents Wi-fi network can be accessed using the username: BROCKGRAD and password: welcome2brock!