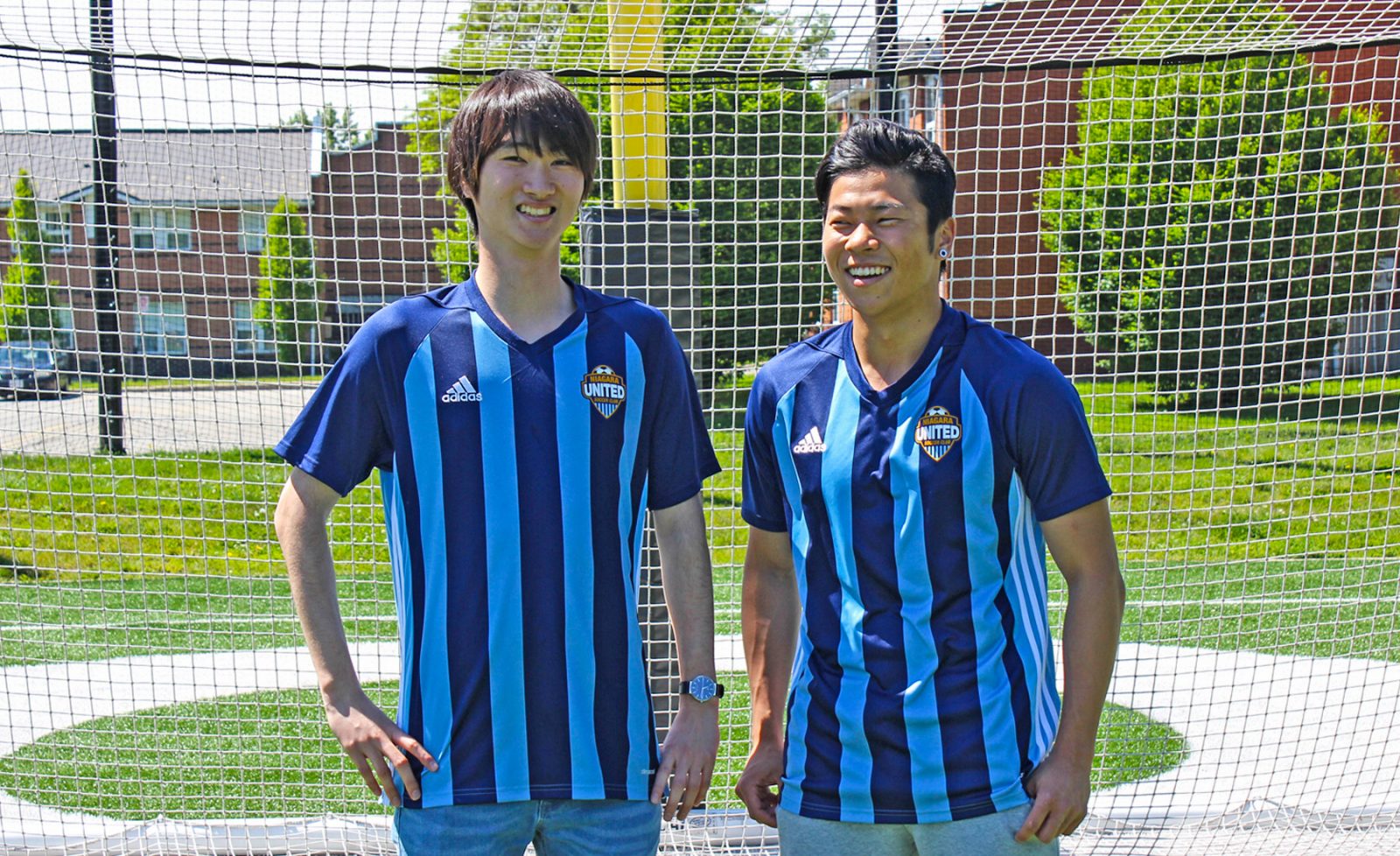 While they came to Canada with the goal of improving their English skills, two Brock University students soon found themselves scoring spots on one of Niagara’s premier men’s soccer clubs.

Riku Nakamura and Kazuki Imoto, both undergraduate students from Toyo University in Japan, arrived at Brock University in February for a 26-week ESL program to improve their English language proficiency.

It wasn’t long before instructor Loralee Vince recognized the two ESL students shared a passion that went beyond the classroom and onto the soccer field.

Both Nakamura, from Chiba, and Imoto, from Saitama, shared their love of the game during a class presentation and spoke about playing competitive soccer in Japan since early childhood.

“Talking about sports in the classroom helps students to relate to each other, bridge cultural differences and share in a common goal,” Vince said.

When she shared their story with her son Samuel Vince (BSM ’16), goalie for the Niagara United Soccer Club, they arranged to have the pair try out for the team in Niagara Falls.

“Loralee’s son met with us and we talked about soccer,” Nakamura said. “He encouraged us to try out.”

Both students made the premier men’s soccer team. Shortly after being added to the roster about a month ago, Nakamura scored a goal in his first game.

“It was very exciting,” he said. “The opportunity to make that first impression with teammates was unforgettable.”

The pair’s soccer experience has also been made memorable by their classmates, who have been attending games to cheer them on from the stands.

Hitting the local fields has been an eye-opening experience for Nakamura and Imoto, who have noticed several differences in the North American style of play compared to Japan.

There’s an increased level of emotion among players as they react to penalties, missed calls and goals being scored, Imoto said. Nakamura also found the style more aggressive than what he’s used to at home.

Also making play interesting is the makeup of the team, which includes several international players from Africa, Europe, Latin America and the United Kingdom — all with varying accents.

“Communicating during the game has been difficult,” Nakamura said. “We’re relying a lot on body language.”

But before and after each game is a different story, with both students finding huge benefits in practising their English skills while interacting with teammates.

“It has been like having many conversation partners,” Nakamura said.

Vince said the opportunity has proven valuable for her students.

“It is great to see international students interacting and integrating into the local community, but it’s also about having them find real-world ways to practise their English language skills,” she said.

Nakamura and Imoto never anticipated joining a soccer club before arriving in Canada, but the desire to improve their English language skills and experience other cultures outside of the classroom made it a fitting opportunity.

Both students will continue to play for the Niagara United Soccer Club before leaving Canada on Aug 18.