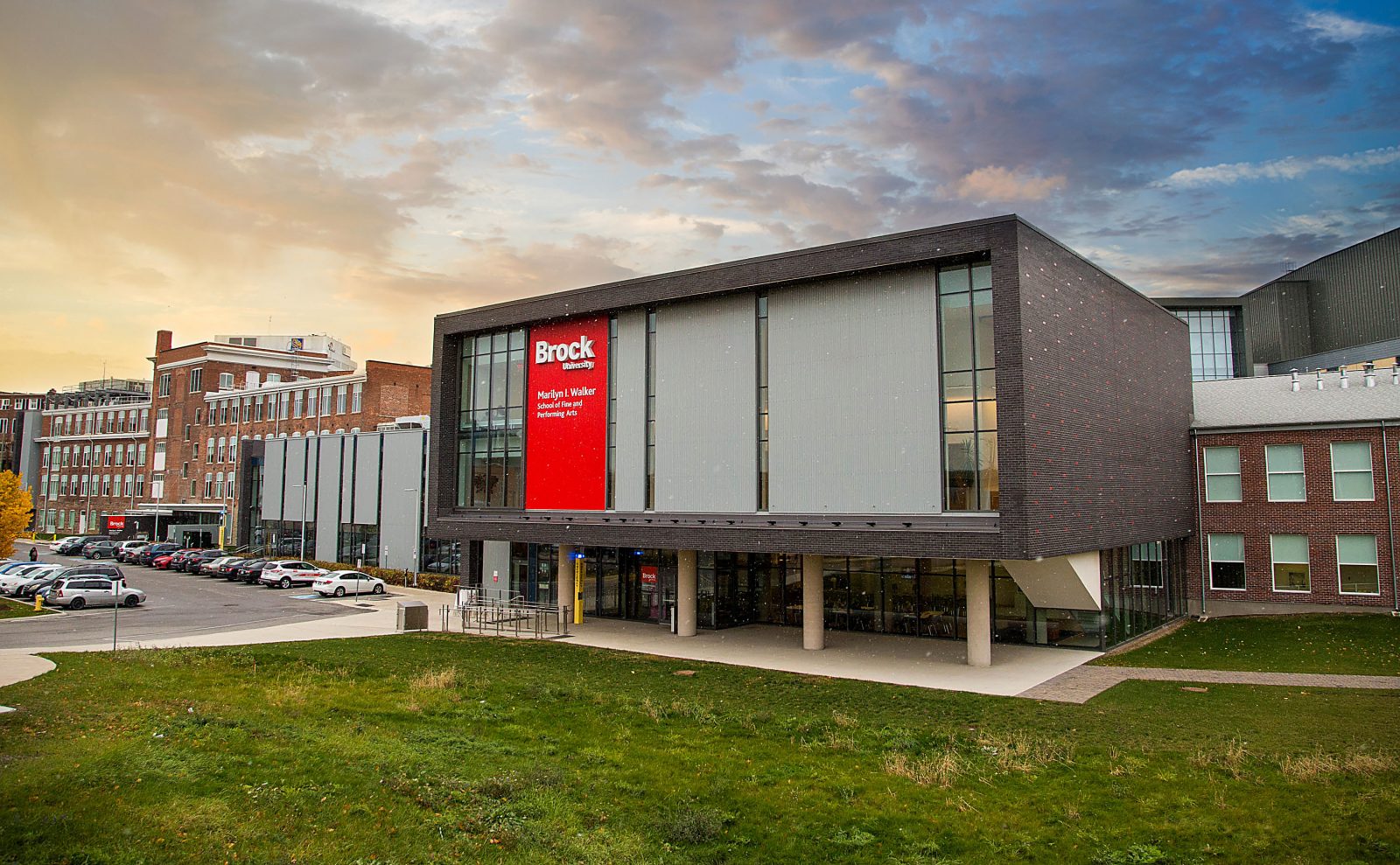 The first group of students to have completed their entire four-year degree at the Marilyn I. Walker School of Fine and Performing Arts’ downtown St. Catharines facility will cross the stage at Spring Convocation on Friday, June 14.

Sixty-three students from Brock’s Departments of Music, Visual Arts and Dramatic Arts will graduate from the downtown arts school, which opened its doors in 2015. Nine students who minored in programs at the MIWSFPA will also graduate on Friday.

The milestone is not lost on the 2019 graduating class.

“It’s a cool honour to be part of Brock history and I’m grateful to have trained in such a professional environment,” said Emma McCormick, who completed a Bachelor of Arts in Dramatic Arts, Performance Concentration. “I feel that I’ve gained a lot of skills that will serve me in my career, specific to the learning I received at the MIWSFPA.”

The London, Ont. native is the recipient of the Jean Harding Prize, which is awarded to the student who achieves the highest standing in fourth-year Dramatic Arts. She plans to remain in St. Catharines after graduation, where she will continue her studies in Brock’s Adult Education program and working in the performing arts sector.

Providing students like McCormick with a purpose-built, state-of-the-art facility was the vision of the School’s namesake, the late Marilyn I. Walker.

When the famed textile artist and philanthropist donated $15 million to Brock University in 2008, she envisioned the creation of an arts facility that would revitalize downtown St. Catharines and encourage students to study and practice the arts here in the Niagara region.

Her generosity and foresight allowed for the historic Canada Hair Cloth Building to be converted into the new home for the Departments of Music, Dramatic Arts and Visual Arts, and the Centre for Studies in Arts and Culture, which had previously been housed at Brock’s main campus.

The $45.5-million project also received a $26.2-million investment from the Ontario government, numerous private and corporate donors, and relied heavily on the insight and contributions of hundreds of partners such as then-Dean of Humanities, Rosemary Hale, and the City of St. Catharines.

MIWSFPA Director Elizabeth Vlossak, who joined the School on an interim basis from the Department of History, said she has seen first-hand the impact the facility and its programming has on students.

“Although the School is a cultural hub that acts as a living, breathing connection between the city’s past and future, it’s also so much more than that,” she said. “In my short time here, I have seen how these incredible facilities and engaged, passionate faculty benefit our students.”

Graduand Alyssa Shanghavi, of St. Catharines, said she appreciated the availability of unique practice spaces on campus for music students like herself, which allowed her to focus on her studies and hone her skills on the trombone.

The Bachelor of Music recipient said being around other artists all the time and in such close proximity to the downtown core was an invaluable complement to her education.

Gianna Luisa Aceto, a graduand from Mississauga, said that as a painter, she “enjoyed and most definitely appreciated the space the MIWSFPA provided.”

As well as making new friendships and plenty of memories, Aceto attributes the successful completion of her Bachelor of Arts Degree in Studio Art to the artistic identify she forged while studying at the School.

“One of the biggest takeaways for me is finding my passion, my niche,” she said.
“I struggled a lot in finding out what I wanted to create and the reasons for creating it. My time spent within the walls of the MIWSFPA allowed me to uncover that knowledge.”

She also said she has an undeniable gratitude for her professors, and that “the drive they instilled in me has not gone unnoticed.”

Faculty of Humanities Dean Carol Merriam said this milestone serves as time to reflect on the importance of the arts and its ability to create healthy and flourishing communities.

“This first class of students to have spent their entire Brock careers in this splendid facility serve this mission in downtown St. Catharines and in the broader community, but they have also been a defining force within the MIWSFPA itself,” she said. “They have been largely responsible for creating the culture of the School as a place to learn, create and serve as a community. Their impact will last a very long time, and we are proud to see their graduation day.”

The Associate Professor said the class of 2019 should receive their degrees with pride having been part of an extraordinary university experience and contributing to the legacy of the arts, both at Brock and in the community.

With the MIWSFPA’s fifth anniversary on the horizon, the School will continue to offer students unique teaching and learning experiences while honouring the spirit of its benefactor, he said.

“What was interesting about Marilyn is that she was always very curious and engaged with how we, the faculty, envisioned the future,” Knight said. “She thought it was our job to rise to the challenge and define the potential of what she had given to us in the form of this extraordinary gift. I think, in many ways, we’ve done that.

“Now, we are charged to think about not only what we will offer today, but in the long-term, and how we will define pedagogy and the School’s identity long into the future.”