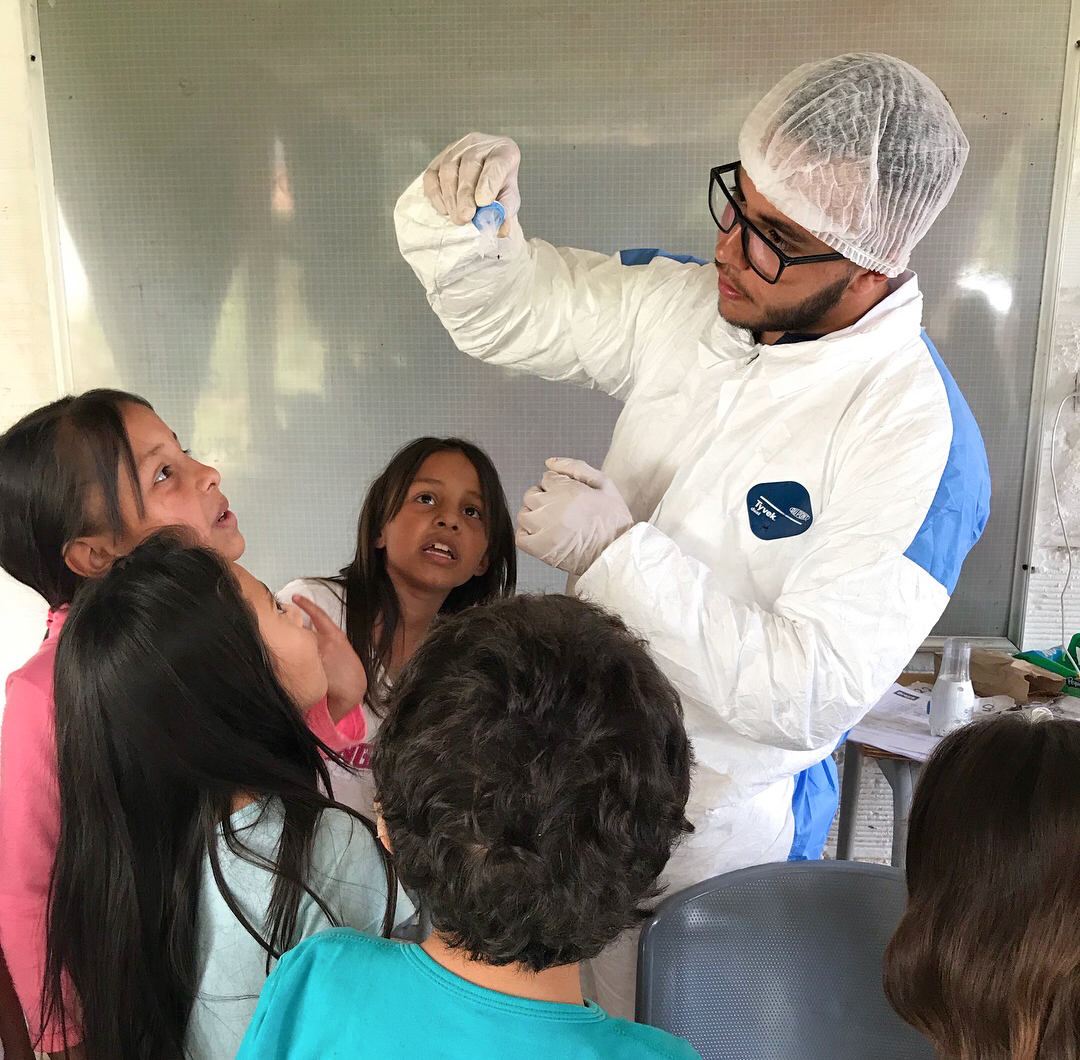 Growing up in a small city in Medellin, Colombia, Oscar Palacio dreamed of becoming a medical doctor.

Now a third-year Brock University Medical Sciences student, he is well on his way to achieving his goals, all while giving back to his home country.

Palacio’s family moved to Brampton, Ont., when he was 12. Although he has lived in Canada for many years, he has held his roots close and aspired to return to Colombia to make a difference.

“In September 2017, after a family trip to Colombia to visit the small towns and villages of my childhood, I returned to Brock with renewed enthusiasm to make a contribution to these close-knit communities,” Palacio says. “I reached out to Professor Sanchez, who was one of the first people I met at Brock and asked her for advice on how to address one of the health challenges they were facing — head lice.”

Health Sciences Professor Ana Sanchez, who has done extensive research on parasitic diseases in Honduras, suggested Palacio use her existing research model to expand the lice study into areas of Colombia with similar health and economic factors.

“One of the main challenges of expanding a research project into a new region is finding a community organization to partner with,” Palacio explains. “Fortunately, I had participated in Brock’s Solidarity Experiences Abroad program in Ecuador and was able to work with the University’s co-ordinator to connect with their counterpart organization, Solidaridad en Marcha — Medellin Colombia, or Marching with Solidarity.”

The organization works in vulnerable communities with families that are headed by women, Palacio explains.

“Each community where Solidaridad operates is very organized around this particular group that supports them,” Palacio says.

“They operate within the Catholic value system to offer different types of public health and life skills talks and workshops, as well as some food subsidy programs.”

Palacio knew from the beginning he wanted his research to be very grassroots and provide a direct benefit to individuals facing socio-economic challenges and barriers. The partnership with Solidaridad en Marcha provided access to a population that is impoverished, exposed to violence, has limited access to education and has challenges accessing clean drinking water.

Guided by Sanchez, Palacio’s project aimed to determine the prevalence and intensity of infestations, as well as the perceptions and beliefs about head lice among children and community members.

“I wanted Oscar to be able to give back to the community,” Sanchez says. “This meant creating informational materials and resources in Spanish and finding a Canadian pharmaceutical company to donate lice treatment.”

After months of preparations and outreach to several Canadian pharmaceutical companies, Palacio was fortunate to be contacted by Dawn Mucci, President and Founder of Barrie-based LiceSquad.com, just a week before his departure to South America. She generously donated 100 treatments for the study’s participants.

With everything falling into place, Palacio left for Colombia in May 2018 to start in-person meetings with groups that expressed interest in the project. He worked from mid-June to the end of July to collect data for the study.

Eighty children, ages two to 14, participated in the research, including 52 girls and 28 boys.

He reported that while many of the involved parents were aware their children had lice, the lack of treatment and prevention education and resources from the municipal government led to some very concerning findings.

“Lack of knowledge led to some parents attempting to treat the lice with potentially harmful chemicals, such as rodenticides, that are toxic to people but do nothing to address lice,” Palacio explains. “The motivations are an honest attempt to get their children back into classes as school policy prevents them from attending if they are infected.”

As the project began to show gaps in the local government’s disease prevention efforts and word of the study got out, Palacio was contacted by a local television station for an interview.

“This was an important moment for me because I realized that people were listening and understanding the information I was trying to share with them,” he says.

Palacio is currently working with Sanchez in Brock’s Infectious Diseases Lab to look at the pathogens of the samples collected from the 80 research participants. A new collaboration between Sanchez’ lab and an Argentinian research institute will investigate whether head lice collected in Colombia and Honduras have developed genetic resistance against chemicals normally used to combat them.