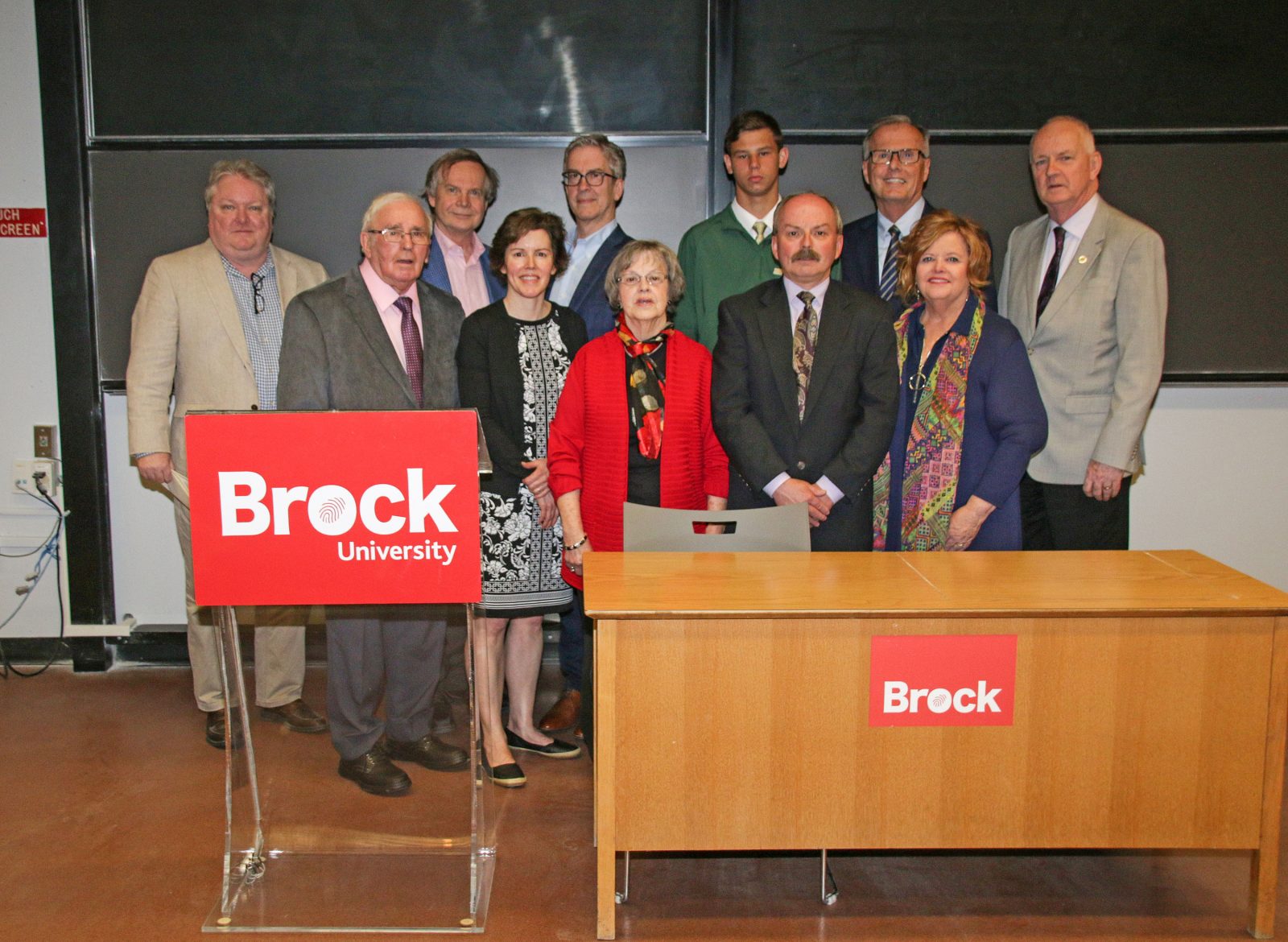 To Art Peltomaa, there’s no more fitting way to honour a legendary Brock University professor than through the naming of a classroom.

It was in the classroom, after all, where Bill Matheson was most at home, and where he made a positive impression on the lives of thousands of students.

Among those students was Peltomaa (BA ’74), who was one of the speakers Monday, May 6 when the classroom previously known as Thistle 245 was named in honour of Matheson.

“To me and scores of others, Bill was a mentor and a friend whose door was always open,” Peltomaa said. “From the day he arrived, it was student experience first. He was an inspiration to so many people. He truly set a very high bar for future faculty members at Brock.” 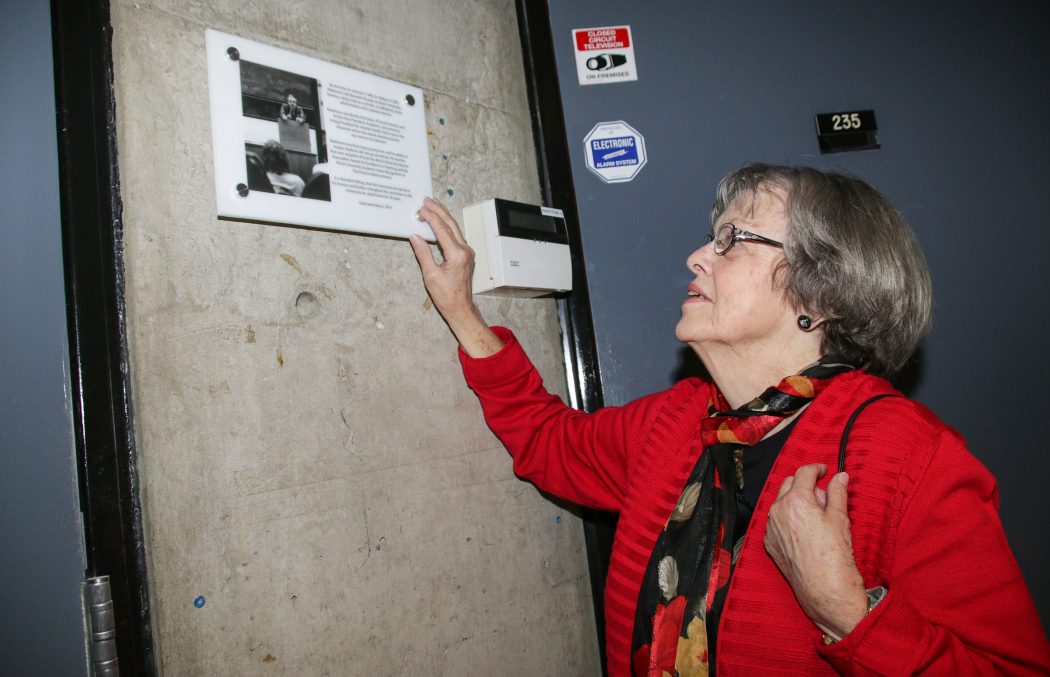 Bill Matheson’s sister Marilyn Moules looks over the plaque outside of the classroom named in honour of her brother.

Matheson spent three decades at Brock. He was the University’s first Dean of Social Sciences, first Vice-President, Academic and served for a time in 1983 as Acting President.

Peltomaa was so inspired by his former professor that when he made a generous donation in 2008 to help fund the construction of a new learning commons in the James A. Gibson Library, Peltomaa asked that the space bear Matheson’s name, rather than his own — hence the Matheson Learning Commons.

“People who knew Bill as a teacher, a friend or a colleague still think about him,” Peltomaa said. “I know on an ongoing basis I wonder what Bill would think of this or that.”

After his retirement in 1998, the William Matheson Bursary was created in his honour, and it was enhanced after his death in 2017 when he left a gift in his will.

“Bill would have been very humbled and honoured by this,” said Matheson’s niece Rhonda Moules. “We spoke frequently about the important role educators played in motivating, supporting and inspiring students. Bill was a champion educator, but he never saw himself that way. 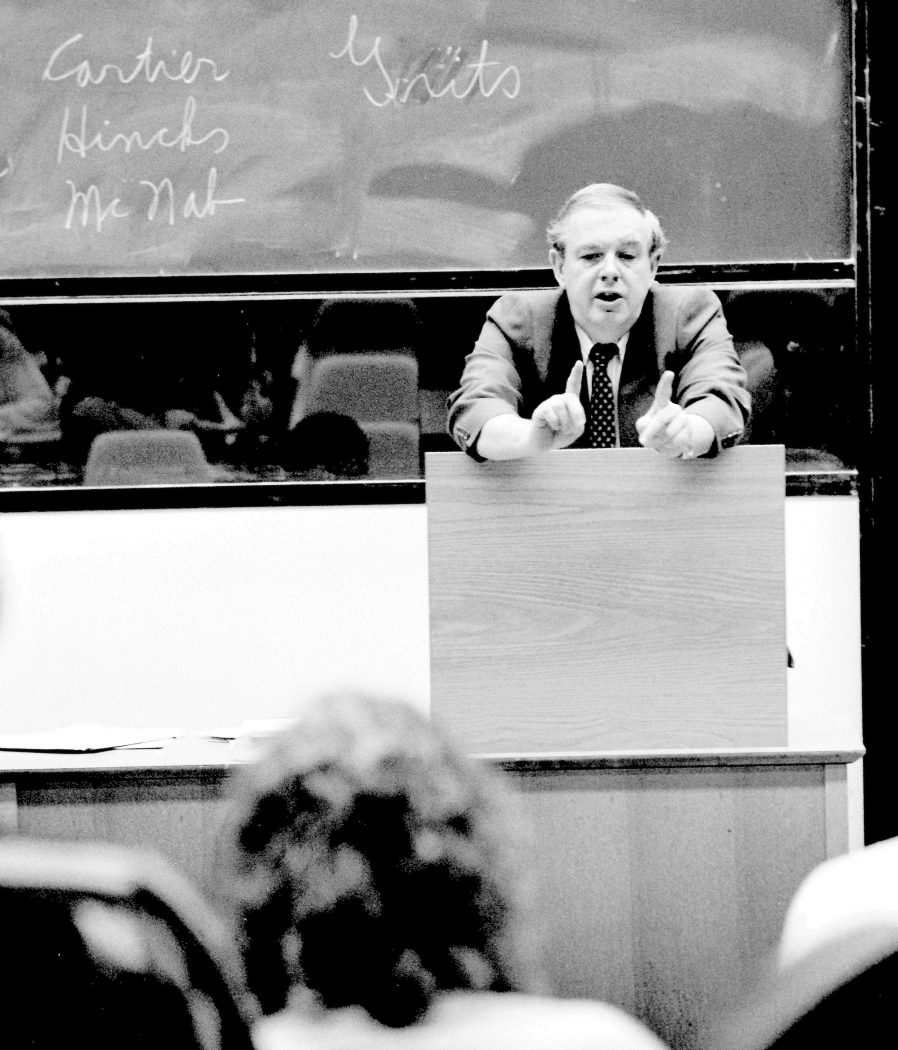 Bill Matheson in a lecture hall, 1987: “My approach was … to always be available and to encourage them so that they would have the best possible university experience.”

“Being able to communicate and forge relationships with students, professors and fellow administrators while being funny, articulate and genuinely caring was one of his strengths.”

The idea to name the classroom in Matheson’s honour was led by Political Science Department Chair Paul Hamilton. It didn’t take much convincing to move the project through the approval process.

“I think this classroom naming and the Learning Commons in terms of the legacy we see on site because of what Bill did when he was here is important, but what’s more important is the interaction he had with the students,” said Greg Finn, Interim Provost and Vice-President, Academic. “When you look at his values, they’re reflected very much in our Strategic Plan that just came out in terms of student-centred focus, research and community. All of those things are what he did when he was here, without having those words in place.”