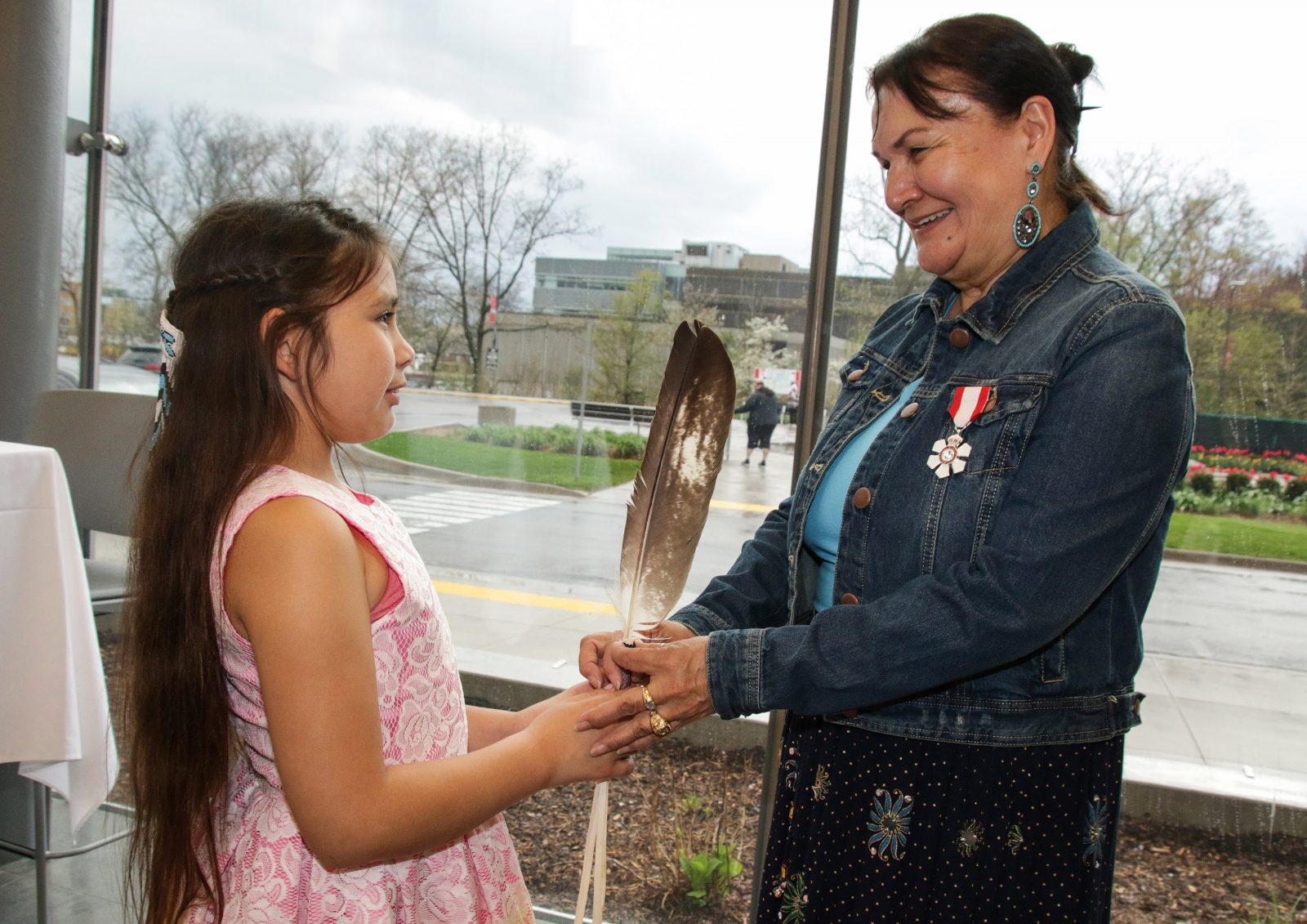 Brock University Chancellor Shirley Cheechoo is presented an eagle feather by Alexis Isaacs during a reception Thursday, May 9 to recognize Cheechoo’s Order of Canada honour.

Brock University Chancellor Shirley Cheechoo was one of 39 people invested into the Order of Canada Wednesday, May 8 by Governor General Julie Payette.

Thursday night, the Indigenous academic leader and award-winning artist was welcomed at a reception at Brock, where a packed house celebrated the remarkable achievement. 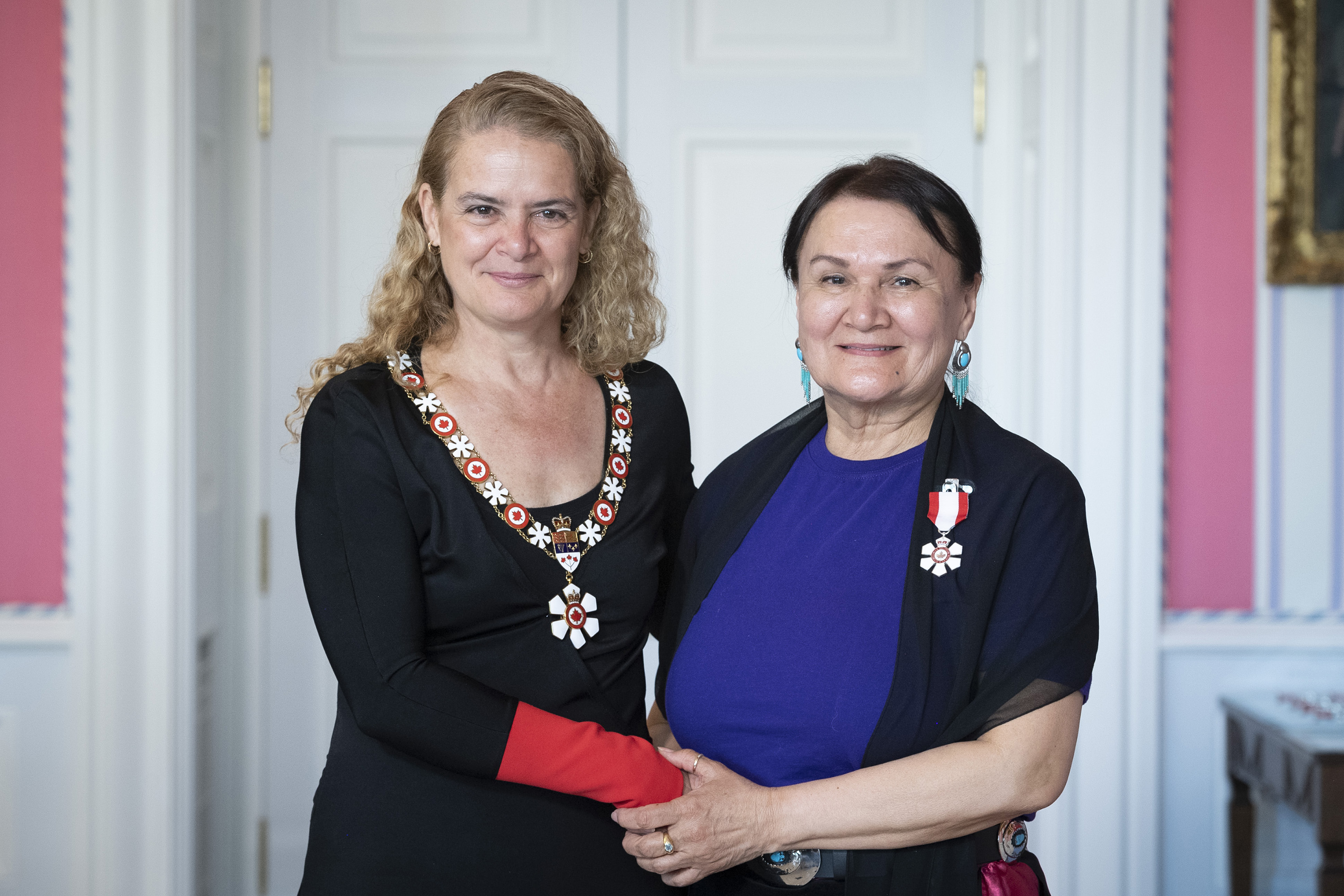 “What this means to me is that it honours so many people,” Cheechoo said. “My mentors, my family, my friends and the elders who have taught me. Everyone walked this road together. I didn’t do it alone.”

The Order of Canada is one of the country’s highest honours, recognizing Canadians whose service shapes society, whose innovations ignite imaginations and whose compassion unites communities. There are three levels of the Order of Canada and Cheechoo was invested as a Member.

Among the speakers Thursday was Amos Key, Jr., who will begin his tenure as the University’s first-ever Vice-Provost of Indigenous Engagement on July 1.

He said the opportunity to work with Cheechoo was one of the things that attracted him to the role at Brock.

“I was grateful that Shirley opened the door for creating the position of Vice-Provost of Indigenous Engagement,” Key said. “Knowing her story and her journey and having spoken to her a couple of times, I thought it would be great if I got the role. I’m looking forward to working with her.” 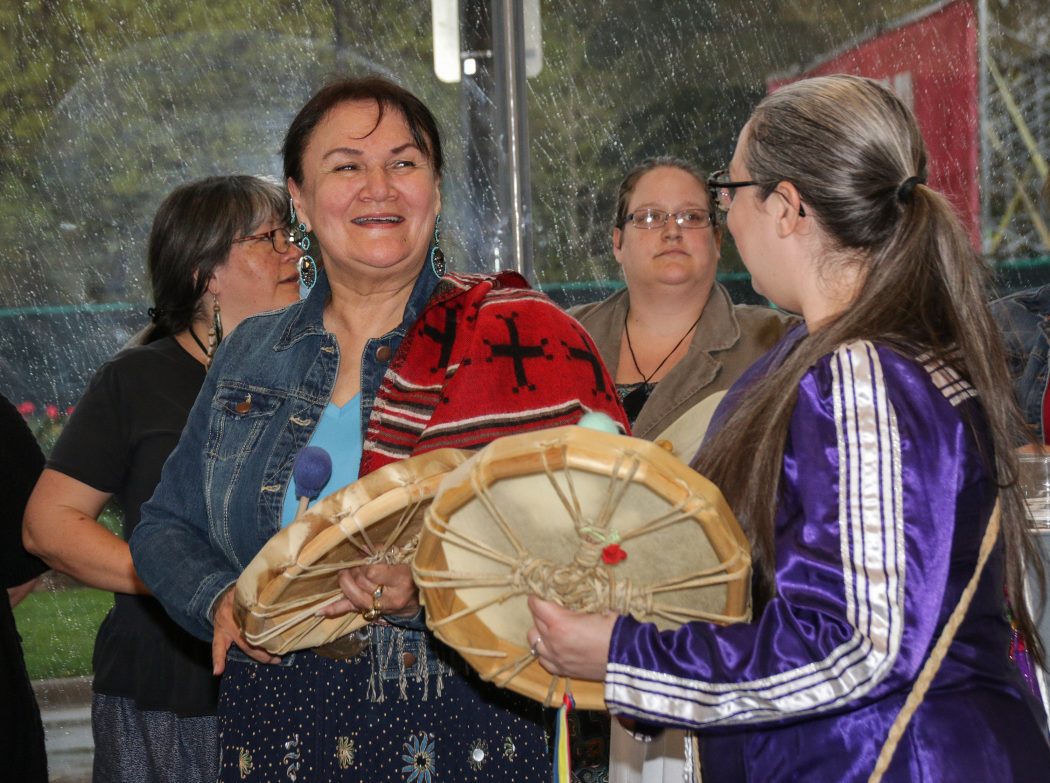 Brock University Chancellor Shirley Cheechoo drums with members of Strong Water Women during an event held in her honour on Thursday, May 9.

A member of the Cree nation, Cheechoo became the first woman and first Indigenous Canadian to be appointed to the ceremonial leadership role of Chancellor of Brock University in 2015. She is also the founder and executive director at Weengushk Film Institute on Manitoulin Island, which helps Indigenous and at-risk youth develop career skills or return to school.

As a filmmaker, Cheechoo’s work has been shaped by her First Nations background. Her award-winning 2012 film Moose River Crossing examines characters who, like her, are survivors of the residential school system.

Similar to her work in theatre and filmmaking, Cheechoo has helped to move Brock University through the power of stories, said Carol Jacobs, who was Brock’s Elder-in-Residence for nearly a decade.

“In doing so, she has made this University a better place for the whole campus community and is most worthy of the award we celebrate tonight,” Jacobs said. “Much of the progress we have seen at Brock is directly connected to her advice and influence. She has helped to clear Brock’s path towards a stronger and more respectful relationship with Indigenous students, staff and local communities.”

“I have witnessed how she inspires and energizes excited young people at Brock University Convocation ceremonies,” he said.

Fearon said it’s not a coincidence that the new position of Vice-Provost for Indigenous Engagement was established during Cheechoo’s time as Chancellor.

“Shirley’s arrival at the University has helped the Brock community better understand and embrace the importance of our Indigenous relationship,” he said. “I am excited at the thought of Amos helping to strengthen our connections with the Indigenous community both internally and externally — working to ensure that the community benefits from what Brock can do.”