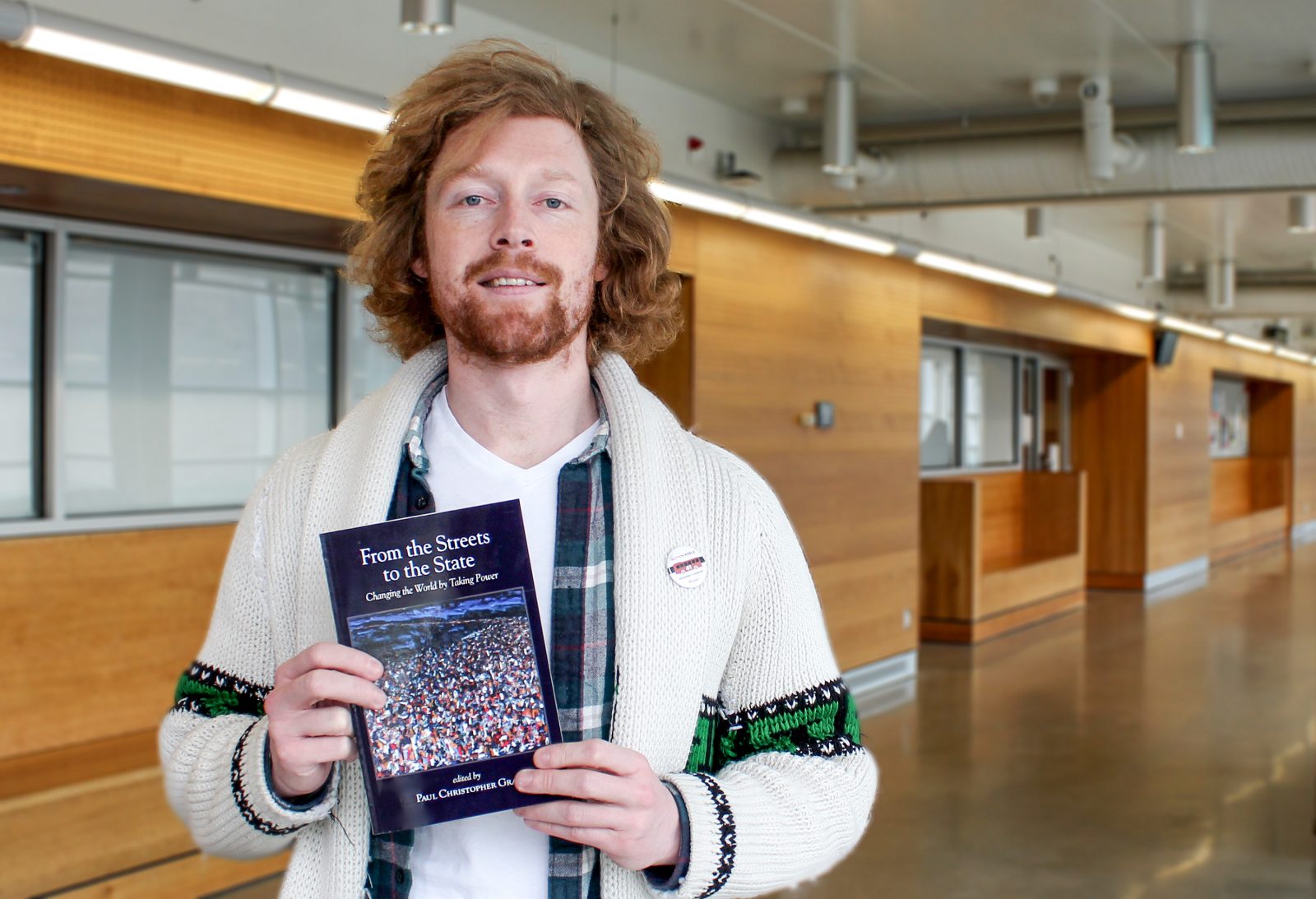 Paul Gray, Assistant Professor of Labour Studies, with his book From the Streets to the State: Changing the World by Taking Power.

How to confront an entrenched capitalist system viewed by some as unjust and illegitimate is a dilemma facing the political left, says Brock Assistant Professor of Labour Studies Paul Gray.

In his new book, From the Streets to the State: Changing the World by Taking Power, Gray questions whether one must operate from within a system to change it or if social change be achieved from outside.

Edited by Gray, From the Streets to the State explores the promises and pitfalls of two prominent strategies the left has employed to achieve societal change.

The book attempts to reconcile the more traditional strategy of taking political power to create change with the relatively new strategy of creating change without taking power. Both have been tried with limited success. Gray suggests that for the radical left to have a place in the future, it’s time to examine and learn lessons from both strategies.

For much of the 20th century, the left was embodied by the formal politics of communist and social democratic movements. Results of those regime changes often fell short of expectations.

Since the 1970s, frustrated by the perceived and real failures of state socialism, some leftists turned to a strategy that theorist John Holloway labelled “changing the world without taking power.” This so-called anti-power politics shuns political parties, electoral politics and winning government office, says Gray, turning instead to social movements, community cooperatives and coalitions to effect social change.

But, “by disengaging from the terrain of government,” Gray suggests the radical left may have facilitated the negative effects of neoliberalism and opened the doors to a variety of alternative and sometimes extreme opinions on both sides of the political spectrum.

Gray began working on From the Streets to the State in 2014, during what he calls “a low period for the left.” At that time, hope was fading that the 2008 financial crisis would spawn a shake-up of the dominant neoliberal worldview.

“There did not seem to be emerging many organizational structures that would offer any kind of alternative politics, with the exception of Syriza in Greece. It was the one radical left anti-capitalist party to win governing power since the financial crisis,” he says.

As the limits of the Holloway strategy become clear, many on the left — “people who participated in and saw the limits of the Occupy movement, for example” — are returning to ideas of socialism, democratic socialism and political parties, Gray says.

“The pendulum has shifted toward the idea of making change by taking power through political parties and electoral politics,” he says, pointing to the rise of Bernie Sanders in the U.S. and Jeremy Corbyn in the U.K.

“Sanders and Corbyn have put the idea of the legitimacy of democratic socialism and the formal organization of political parties back on the agenda in a huge way.”

While Gray doesn’t believe in changing the world without taking power, his book acknowledges the achievements of the movement as well as the “complex and disastrous” results of attempts to do the opposite.

Readers may initially be most interested in the first half of From the Streets to the State that looks at social movements, political parties and “how to have a genuinely democratic political party.” However, Gray says the second half of the book may be the most important “because it speaks about the immense difficulties of egalitarian transformations of governance, administration and broader society.”

Gray gathered case studies from around the globe that, he says, outline “many of the different obstacles that can arise and mistakes that have been made” and demonstrate the importance of public sector workers in attempts to democratize administration and governance.

Far from “nitty-gritty details” that can be put off until power is attained, he stresses these obstacles need to be considered, and strategies developed, before any attempt is made to change the world by taking power.

The lessons shared are crucial for “broader social movements if they’re actually going to try to do something as ambitious as dramatically transform society to something much more equal than it is now,” he says.

In his book, as in his classroom, Gray encourages people to actively seek out and engage with the strongest arguments of people with whom they disagree.

“My fear is that people will remain in their silos … and thereby lack much of an explanation of what gives rise to the ideas and practices of those they disagree with. But they also lack the ability to defend their own positions.”

Gray says many of his students feel the current system cannot be reformed but that dramatic change is necessary. “On the other hand,” he says, “there’s an immense cynicism about the prospects for change.”

With the lessons learned from the case studies in From the Streets to the State, Gray may have improved those prospects.