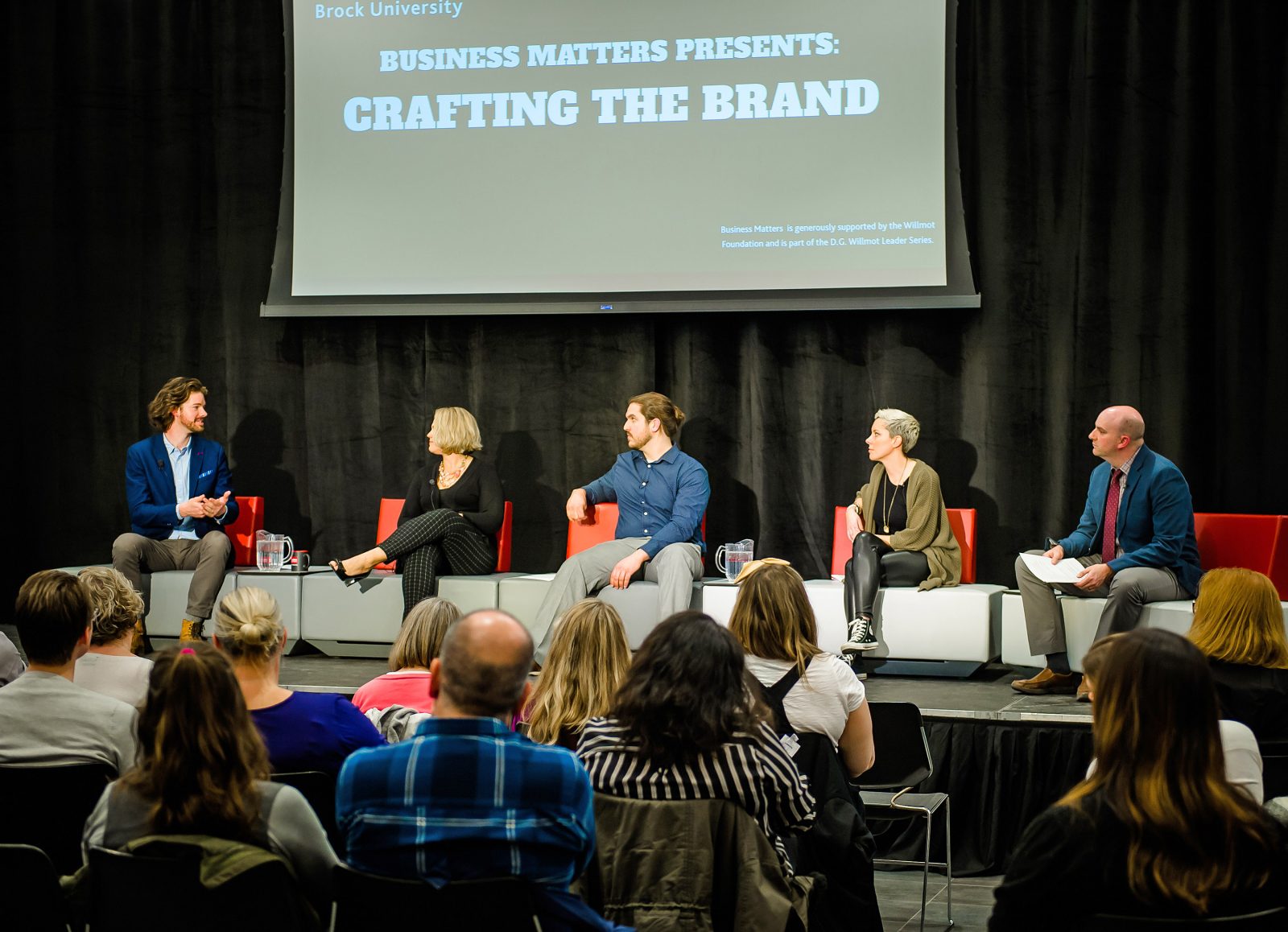 Geoff Dillon plans on talking a lot in 2019.

He has a story to tell, but as Ontario’s first craft distiller it’s a story he hasn’t felt compelled to share until now.

Since opening Dillon’s Small Batch Distillers in Beamsville in 2012, Dillon has seen the proliferation of what he calls “phoney craft” spirits hit the market. It’s liquor produced by large companies on behalf of distillers branding themselves as artisanal. Their bottles are adorned with quaint, eye-catching labels, and the booze is sold significantly cheaper than Dillon’s spirits made in small, time-consuming batches.

But consumers willing to pay more for Dillon’s gin, vodka, or peach schnapps get local fruit in every bottle and help to keep 18 people employed at the small business, he explained.

The young entrepreneur was part of the annual Business Matters panel discussion hosted by the Goodman School of Business Thursday, April 4. Moderated by Goodman Marketing Professor Todd Green, this year’s theme, Crafting the Brand, was intended to shed light on what it means to take an artisanal, authentic approach to running a business.

Green pointed out that consumer interest in craft businesses is pushback against big corporations more concerned with the bottom line than building and supporting community by making superior products, much like Dillon and his co-panelists do with their enterprises.

“Craft has a buzz quality to it, but it’s well-enough established beyond a buzz phenomenon,” Green said about the impetus for the night’s theme. “People really like it and want to support it. They want to meet the brewmaster at Breakwall or the owner of Dillon’s. There’s an inherent value to saying you’re small and caring about what you’re doing.”

That message was echoed by the panelists.

As such, they’re also willing to pay to do it, particularly when that artisanal business is producing a better product than the competition, Jensen noted.

“From a consumer perspective, there’s more of a value perception with a craft brand,” she said. “You’re not one of the big guys, and you’re not going to get something for $5.”

Still, big isn’t bad, Davies said. In the world of beer, people love to bash big breweries, but he pointed out they make a “good and consistent” product.

“It might not be to my taste,” he said. “For us, we’re trying to push the limits of what a small town can do. We’re growing the community.”

In addition to hearing the panelists’ ideas and challenges with their small businesses, Green was hopeful the evening would help other aspiring entrepreneurs.

“We want to engage the community and put a spotlight on what people are doing in Niagara, but also give people the chance to hear how that business grew,” he said. “Budding entrepreneurs may be wondering ‘What if I opened a craft brewery, a craft winery or a boutique social media agency? Is there room for me?’”

The Business Matters series is supported by the Willmot Foundation and is part of the D.G. Willmot Leader Series.