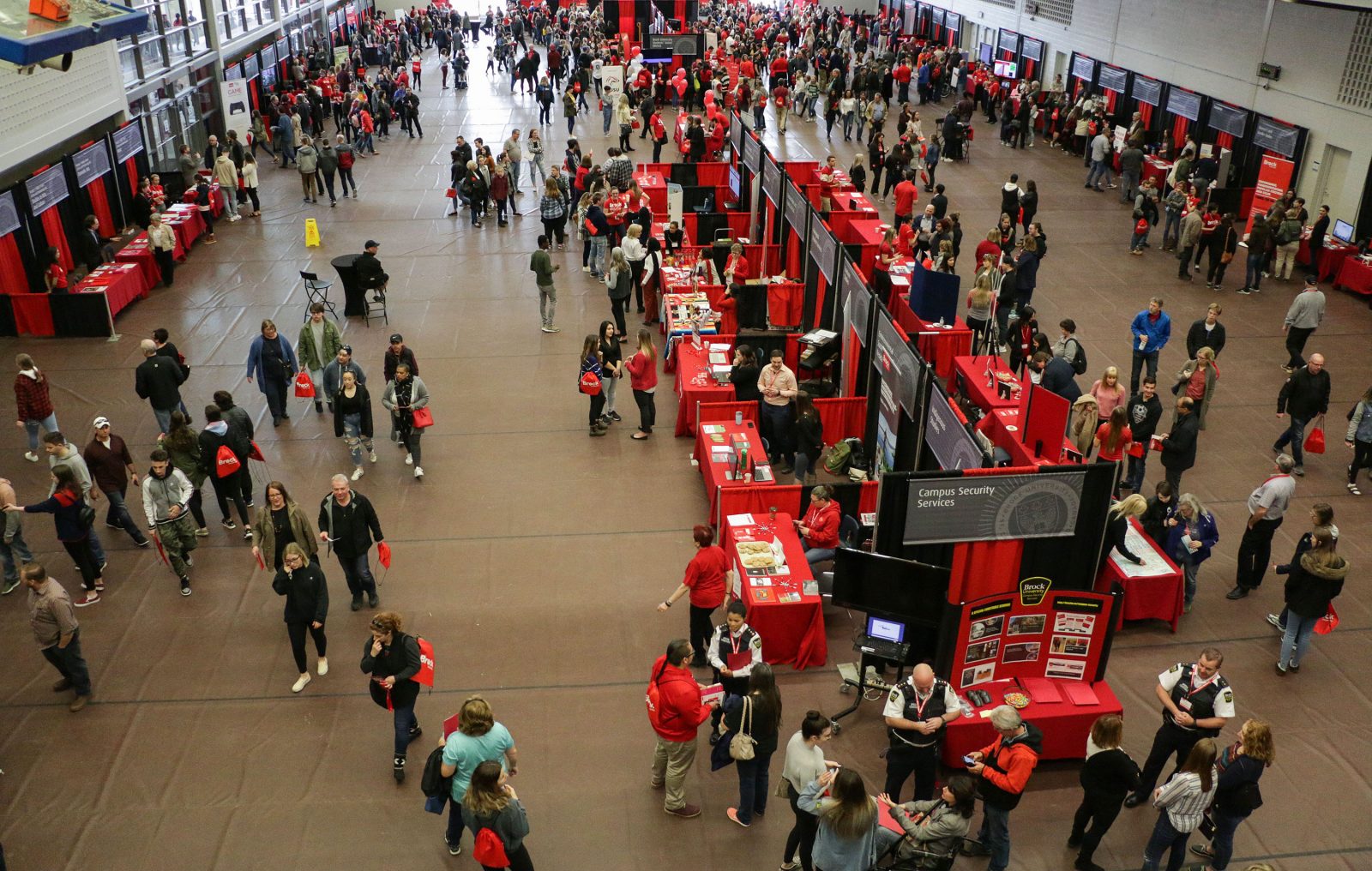 For Ashley Michaud, the more than eight-hour drive to Brock University was entirely worthwhile.

The trek to St. Catharines for the University’s annual Spring Open House on Sunday, April 7 affirmed for the 17-year-old Timmins resident that Brock is everything she hoped it would be. 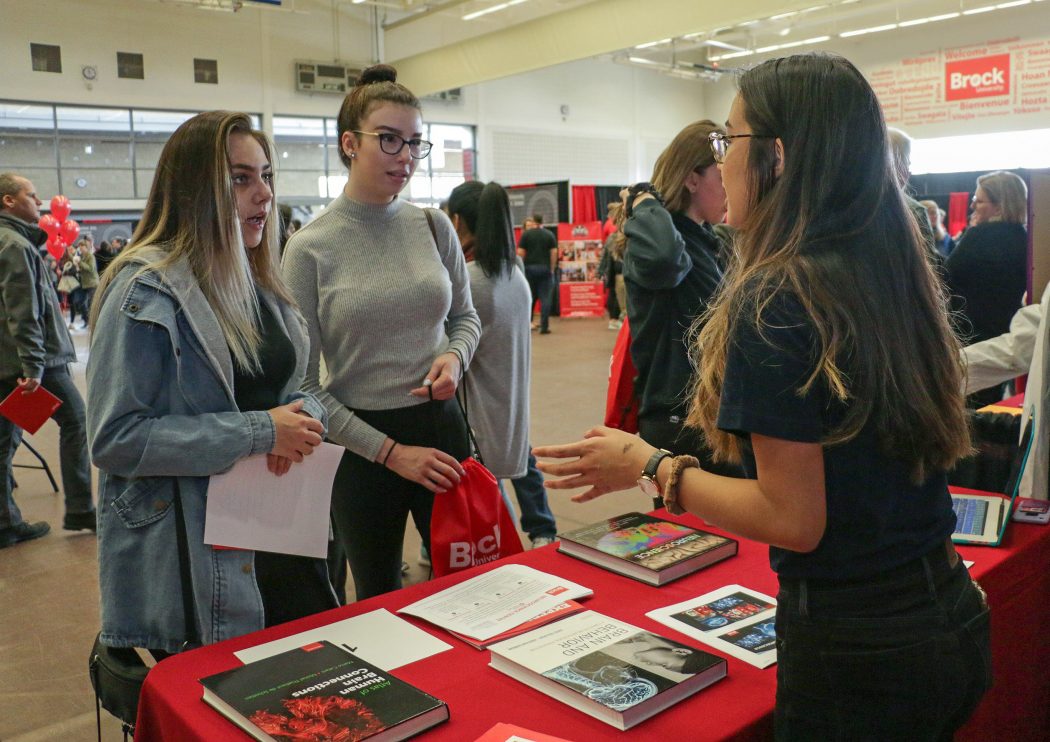 “It’s really homey here and everyone has been so welcoming,” said the Grade 12 student, adding Brock is her No. 1 choice to pursue studies in Psychology. “We planned this whole trip around Brock and so far, I’m really impressed.”

Michaud was among 4,600 visitors to campus for Sunday’s annual event, which gave prospective students and their families a taste of what life at Brock is like.

The day was enough to solidify Jacob Moon’s decision of where to head in September.

Alongside his mother Jeanne, the Mississauga resident made his way to Brock’s admissions office to accept his offer to study Sport Management (SPMA) at the University.

“I’m excited,” Moon said of the big step in his educational journey.

The school came highly recommended by his stepsister, but it was a visit by Brock’s recruitment team to his school that gave Moon the insight he needed to choose a path. 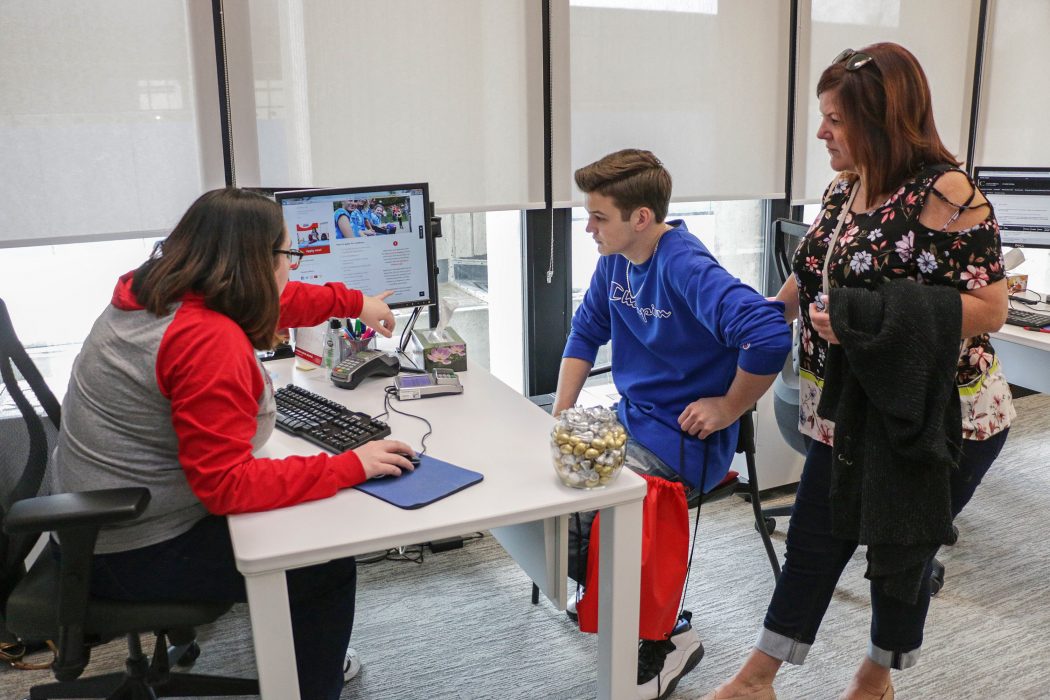 Student Information and Service Advisor Sarah Sager walks Jacob Moon and his mother Jeanne through the process of accepting his offer to Brock during the University’s annual Spring Open House Sunday, April 7.

While mom Jeanne is nervous about her son heading off to university in the fall, having the chance to tour campus and speak with faculty from the SPMA program helped to ease those worries, she said.

In addition to touring campus and meeting with faculty, Open House guests had the opportunity to meet with students and senior administrators, attend program-specific presentations, learn about student services and research opportunities, and take in a first-year lecture. Residences, research labs, athletic facilities and the Marilyn I. Walker School of Fine and Performing Arts in downtown St. Catharines were also buzzing with activity throughout the day.

“I’m so proud of our University community,” said Beth Natale, Brock’s Director, Recruitment, who described the energy on campus Sunday as “off the charts.” “Everyone truly stepped up to make this the best Open House event ever, with incredibly varied programming and unique ways to experience Brock that spanned the entire campus.”

The crowds at Open House complement a series of strong early indicators the University is seeing for fall enrolment, which show an increasing number of students shortlisting Brock as their possible destination for 2019-20.

Among those figures, compiled by the Ontario Universities’ Application Centre, is a more than 15 per cent increase in those listing Brock as their No. 1 pick.

Natale said the University’s admissions team has extended more offers to date in this recruitment cycle, which runs from September to September, than in all of the 2017-18 cycle.

“The numbers say it all; the demand for a Brock degree is evident and the momentum around our brand is growing in leaps and bounds.”