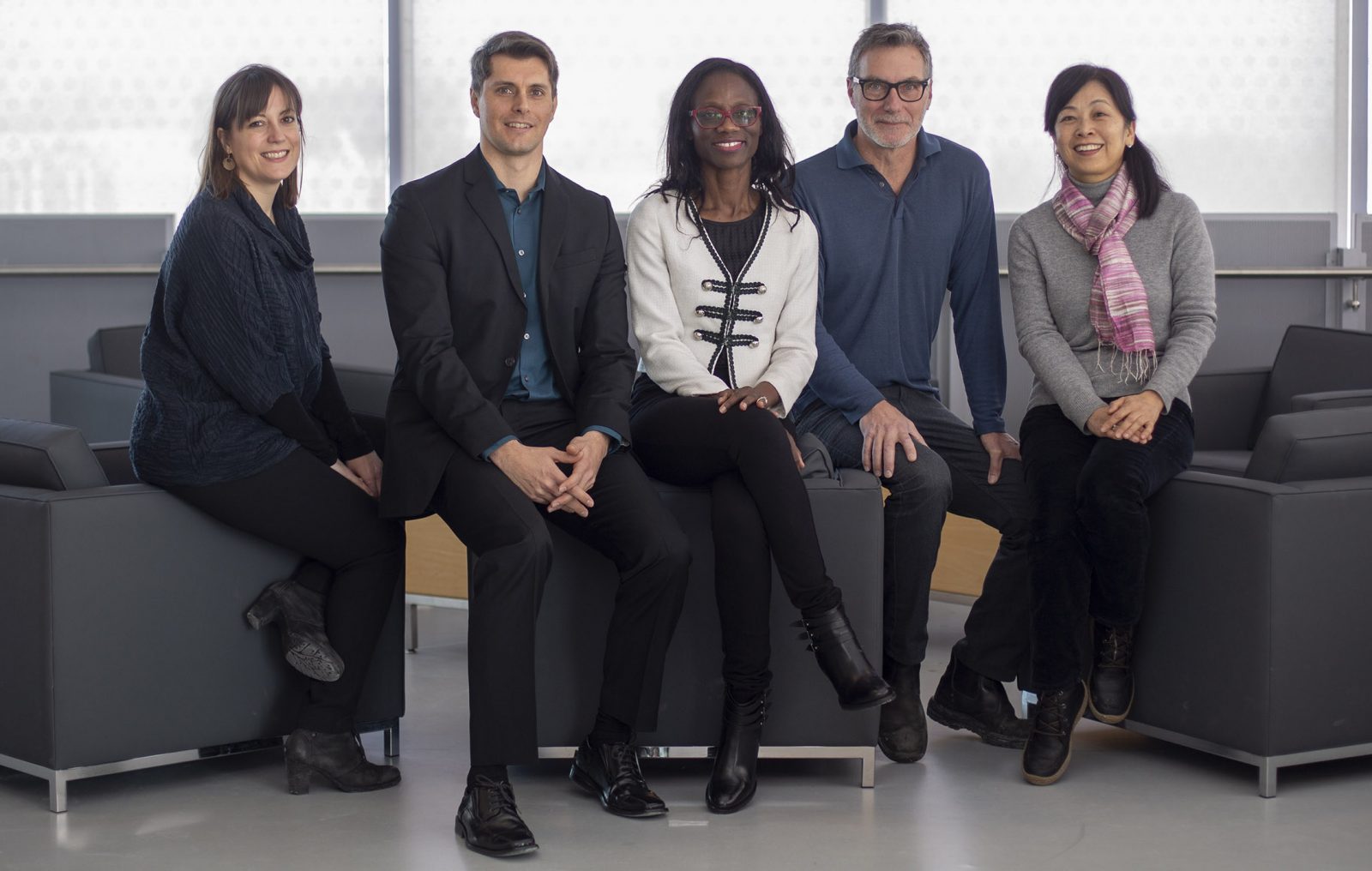 Brock is recruiting three Canada Research Chairs between now and the beginning of June in the Faculties of Humanities, Applied Health Sciences and Mathematics and Science. Pictured are some of the faculty involved in the recruitment process. From left: Elizabeth Vlossak (Director, Marilyn I. Walker School of Fine and Performing Arts), Robson De Grande (Computer Science), Beatrice Ombuki-Berman (Computer Science), Doug Bruce (Biological Sciences) and Miya Narushima (Health Sciences).

Brock University is expanding its research net with three Canada Research Chair (CRC) positions in the areas of Indigenous art practice, health and the interlinkage of biology and computer science.

Recruitment for these positions, which began in mid-March, will wrap up between late April and June.

Researchers and scholars within and outside Brock are encouraged to apply, especially Indigenous peoples, members of visible minorities and those with disabilities, says Interim Associate Vice-President, Research Michelle McGinn.

“These scholars often bring new perspectives that lead to critical research advances, and they are important role models for the next generation of scholars,” she says.

The Canada Research Chair Tier 1 in Mechanisms of Health and Disease is centred on investigating ways of preventing, managing or treating a variety of chronic diseases such as cardiovascular disease, cancer, metabolic syndrome, immune diseases and brain disorders.

“This chair will position Brock and the wider Niagara community with the opportunity to study mechanisms of health and disease, solidifying and expanding the current research capacity at Brock,” says Deborah O’Leary, Professor of Health Sciences and Director of the Brock-Niagara Centre for Health and Well-Being.

O’Leary says those applying to the position need to propose “an original, innovative research program of the highest quality” in one of the following areas: inflammation and immunity; genetic and epigenetic programming; host response to infection; nutritional biology and metabolism; and physical or mental stress-induced tissue remodelling.

The competition for that position closes Friday, April 26.

The Canada Research Chair Tier 2 in Indigenous Art Practice position will be cross-appointed to two or more of the academic units at the Marilyn I. Walker School of Fine and Performing Arts, including the Departments of Dramatic Arts, Music, Visual Arts and Studies in Arts and Culture.

The successful candidate will be an “innovative artist/scholar with the demonstrated potential to achieve a significant international reputation within five to 10 years,” says Karen Fricker, Associate Professor of Dramatic Arts.

“The CRC will have an innovative creative practice across one or multiple art forms, working with Indigenous communities and establishing new Indigenous arts-based research and methodologies.”

McGinn says the position demonstrates the University’s response to the Truth and Reconciliation Commission’s Calls to Action.

“Brock University has renewed its commitment to reconciliation and decolonization in its most recent strategic plan, and the CRC in Indigenous Art Practice responds directly to this priority,” says McGinn.

The competition for that position closes Friday, May 10.

He says that, traditionally, researchers in the field of bioinformatics and computational biology are either “primarily biologists who use existing computer software tools, or computer scientists who develop tools that are then applied to biology problems.”

The successful candidate will be proficient in both areas so as to develop software tools and applications in population genomics, proteomics and structural biology.

“The areas of bioinformatics and computational biology have matured significantly, and having expertise in both biology and computer science is a distinct advantage these days,” Ross says.

The competition for that position closes Tuesday, June 4.

McGinn says the three CRC positions are a “key part” of Brock’s latest Strategic Plan, which “identifies a strengthened focus on building research capacity across the University.

“Outstanding scholars who have or will build international reputations engage in high-impact research, and they provide exceptional opportunities for students and postdoctoral scholars who work and learn with them,” she says.

These latest CRCs join Brock’s existing cadre of CRCs and three others in the areas of Psychology, Kinesiology and Child and Youth Studies, announced late last year.