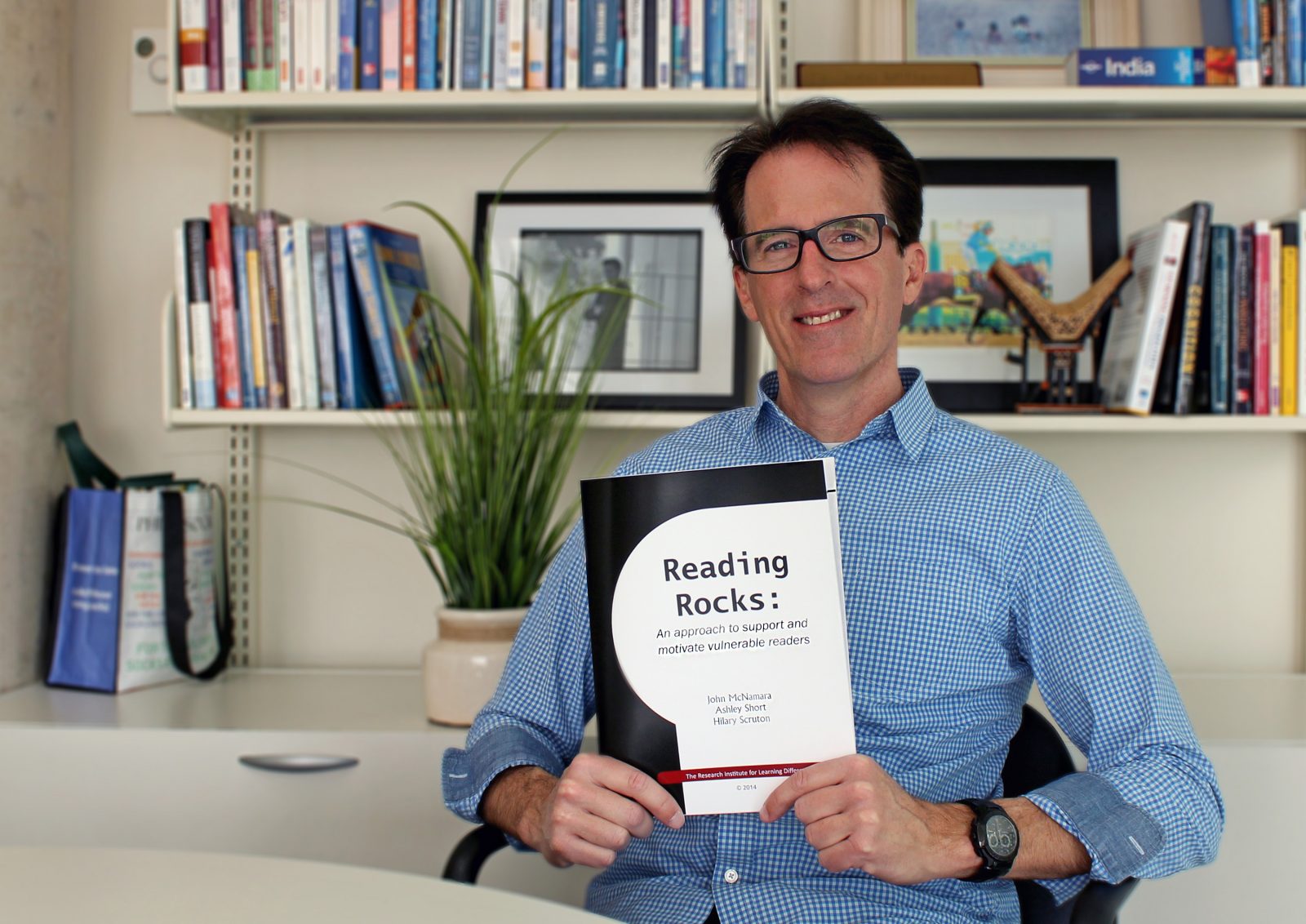 Professor John McNamara, Chair of Brock’s Department of Child and Youth Studies, has been working with the Learning Disabilities Association of Niagara Region for more than a decade after introducing the organization to the literacy support intervention Reading Rocks.

For more than a decade, Brock students and staff have been working to show local kids why reading rocks.

Through a partnership with the Learning Disabilities Association of Niagara Region (LDANR), volunteers from the University have been helping Niagara youths to improve their literacy skills.

“He brought the program and all the research behind it to our agency so we could take that on as one of our projects,” says LDANR Executive Director Samantha Sendzik (BSc ’13, BEd ’13, MA ’15). “That sparked a really strong partnership that’s grown since then.” 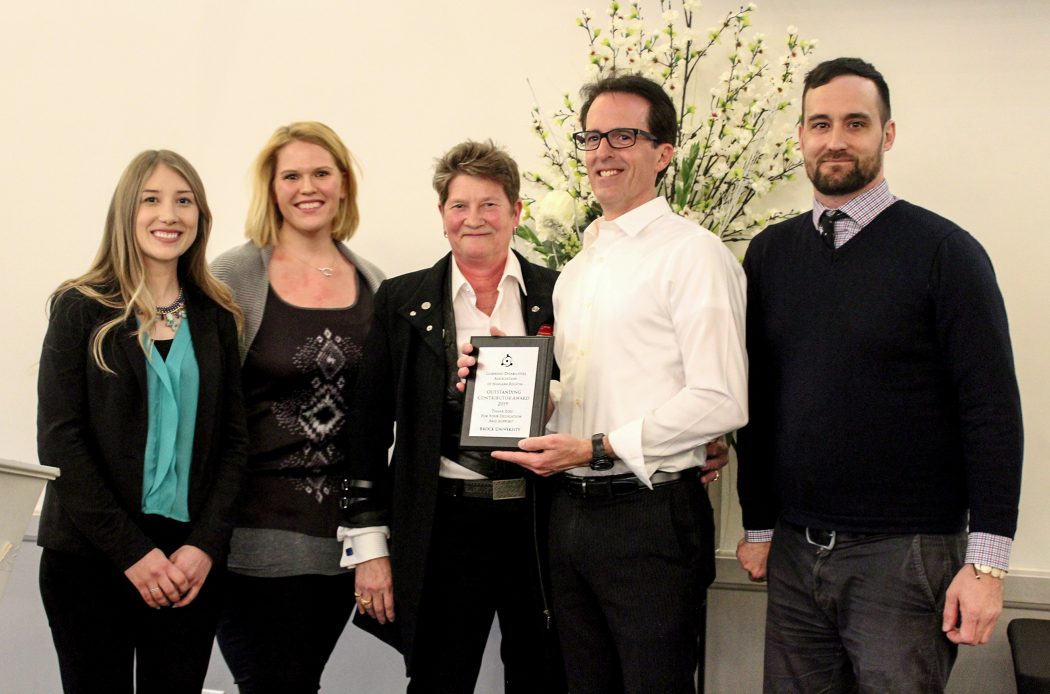 The non-profit celebrates its many volunteers, staff, community partners and funders with an annual Appreciation Night held each spring. At this year’s April 5 event, LDANR presented Brock with the Outstanding Contributor Award to formally recognize the University’s role in the organization’s success.

“While our fantastic volunteers and instructors are crucial to the success of our program, we would not be where we are as an agency without our partnership with Brock,” says Sendzik.

McNamara describes the relationship as symbiotic. “I don’t know that either of us would be able to work as effectively without the partnership,” he says.

Children from across Niagara who are having trouble reading can be referred to the organization. Kids in the Reading Rocks program then get paired up with volunteer tutors.

“The tutors — and we’re talking about hundreds every year — are almost exclusively Brock students,” says McNamara.

Sendzik herself started at LDANR as a student volunteer in McNamara’s class. Seeing the impact that Reading Rocks made in the lives of kids with learning disabilities inspired her to change career paths. Originally intending to be a high school math and science teacher, she decided instead to return to Brock to complete her Master of Arts in Child and Youth Studies under McNamara’s supervision.

McNamara’s students appreciate being able to apply their textbook knowledge to a real-life situation.

“Children in our programs often face challenges when it comes to learning, and their parents are looking for something that’s critical to the overall health of their family,” McNamara says. “It’s our students who are going to help them by using the knowledge and skills they’ve learned at Brock. This really is where the rubber hits the road.”

Because learning disabilities are invisible, these children are vulnerable to being left behind, says Sendzik. “And, because their needs are not obvious, their accommodations are sometimes not being met.” 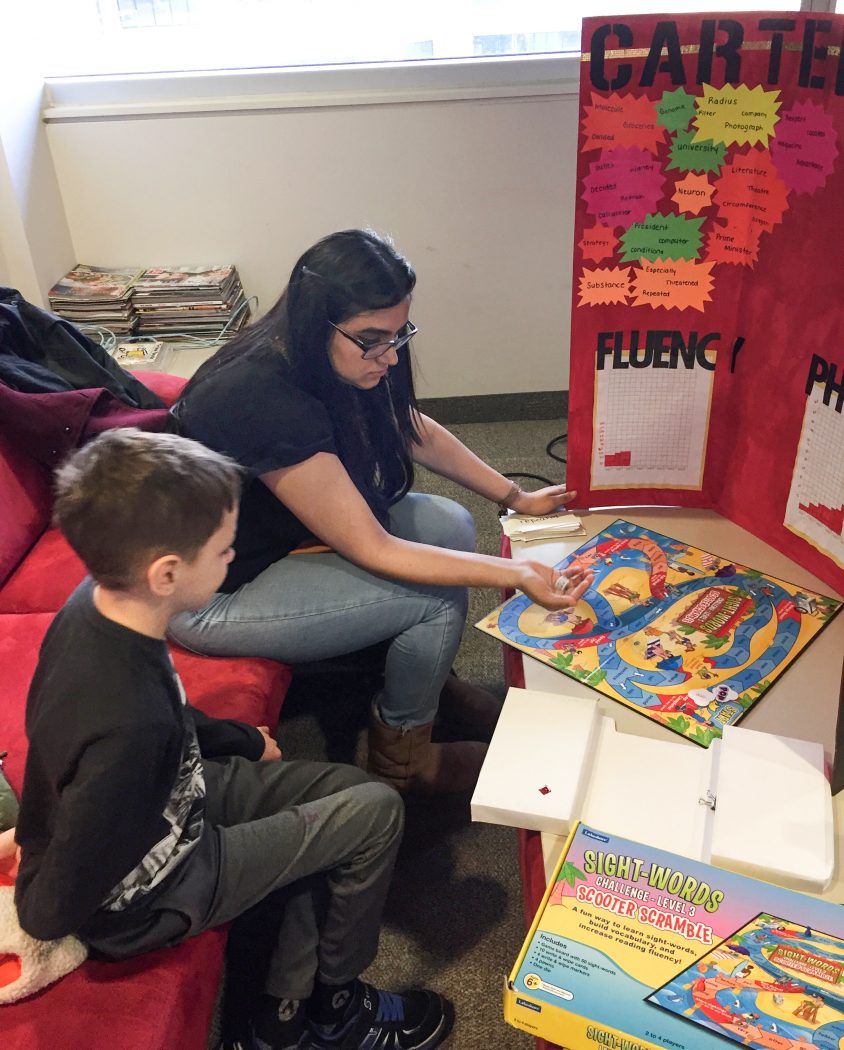 Brock student and volunteer tutor Zuha Ather (right) plays a sight-word board game in a recent Reading Rocks session with a local participant.

Research shows the popular program works but, according to Sendzik, the testimonials from families who’ve experienced Reading Rocks are what really affirms its success.

“Parents talk about their child’s attitude before coming into the program and how their child felt stupid, that they couldn’t do it and that they were less than their peers. They lacked motivation and confidence,” she says.

By the end of the program, parents and teachers often describe “a completely different child,” she says. “Not only are the kids almost up to grade level in their literacy and reading skills but also their motivation and confidence in reading is off the charts.”

Over the years, LDANR’s partnership with Brock has expanded to encompass many departments, Faculties and services.

“We’ve started to branch out to other areas of the University that are looking for community partners to provide students with an experiential learning component,” Sendzik says. A communications intern from the Department of Communication, Popular Culture and Film is currently doing a placement with LDANR.

“Students gain the experience they need for their careers. We gain that expertise and support through volunteerism and research,” says Sendzik. “The University is also moving forward in its strategic plan of supporting students to gain that experiential component while supporting community partnerships and building networks.”

The partnership between Brock and LDANR also “fits with the strategic priorities of the University, including improving equity, accessibility and diversity both within and outside the University,” says Ingrid Makus, Dean of Social Sciences.

“Building community partnerships is a large part of Brock’s strategic mandate,” says McNamara. “One of the ways to do that is through having our students working with community agencies such as the LDANR.”

“The work also exemplifies the Faculty’s commitment to teaching, research and service that addresses the needs of individuals in the Niagara community,” Makus says.

Graduates of Reading Rocks typically work their way back up to grade level, setting them up for future success. Some have spoken at LDANR events. At least one is now enrolled in college.

McNamara figures “it’s only a matter of time” before a Reading Rocks participant comes to study in CHYS. “That will be great to see,” he says.

Information on the programs and volunteer opportunities at LDANR is available on the organization’s website or through the CHYS website.