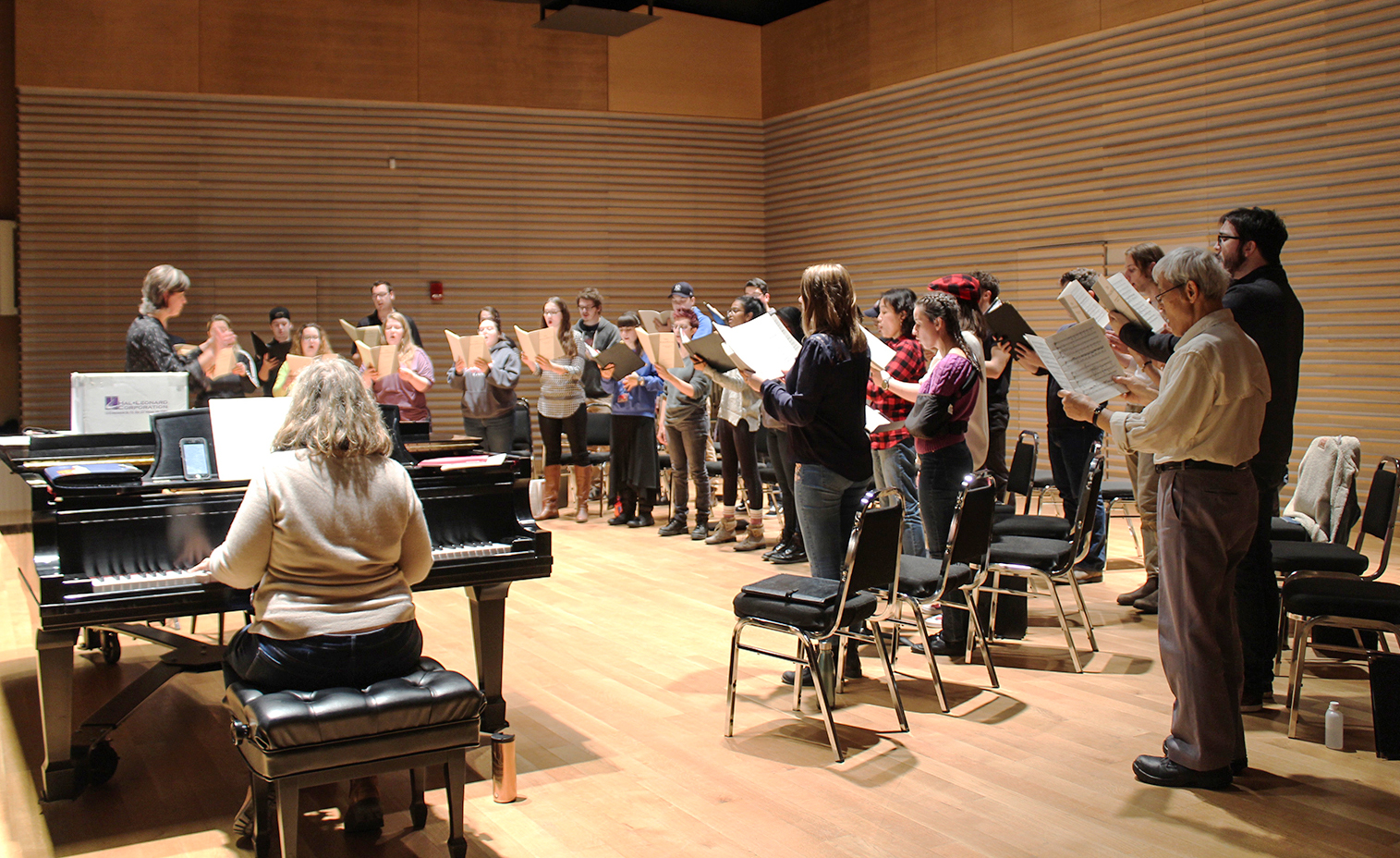 The Brock University Women’s and Chamber choirs, shown at a recent performance, will again take the stage in the Recital Hall of the FirstOntario Performing Arts Centre in downtown St. Catharines on Saturday, March 30 at 7:30 p.m.

The Brock University Women’s and Chamber choirs are back for the second and final performance of the school year, with a program exploring the different stages and seasons of life.

Led by conductor and Brock Assistant Professor Rachel Rensink-Hoff, the two choirs will perform together on Saturday, March 30 at 7:30 p.m. in the Recital Hall of the FirstOntario Performing Arts Centre.

The performance is part of the Viva Voce! Choral Series, which sees the University’s choral ensembles come together as the Brock Choirs in recitals that take place throughout the year.

Since their most recent performance in November, the two groups have been working on new and diverse pieces for their upcoming concert.

“Second semester always has more experimentation,” explained Rensink-Hoff, “so we do a lot of moving around in terms of our seating and how the voices work together.”

The two choirs will perform a wide range of repertoire, from traditional pieces by Schubert, Mendelssohn and Brahms, to more contemporary songs by Canadian composers Nancy Telfer, Jane Siberry and Jon Washburn.

Rensink-Hoff selected poems to include by authors Christina Rossetti, Robert Burns and Charles Dickens, which she believes will resonate with the audience.

The choirs will also perform a few pieces in different languages. Rensink-Hoff said working with that material has been both challenging and rewarding for the groups.

“When you work with languages a lot through singing, you really get an understanding of how a language works,” she said. “From an educational perspective, it’s really wonderful to see.”

Along with pieces in Latin and German, both choirs will perform a composition in Xhosa arranged by South African composer Michael Barrett.

Tickets are $15 for adults and $10 for seniors and students. There is also a $5 option available for eyeGo program members. Tickets are available through the PAC box office at 905-688-0722 or on the PAC website.

The final performance in the Viva Voce! Choral Series is also approaching on Saturday, April 27 featuring the Avanti Chamber Singers. For more details on upcoming concerts, visit the Department of Music website.