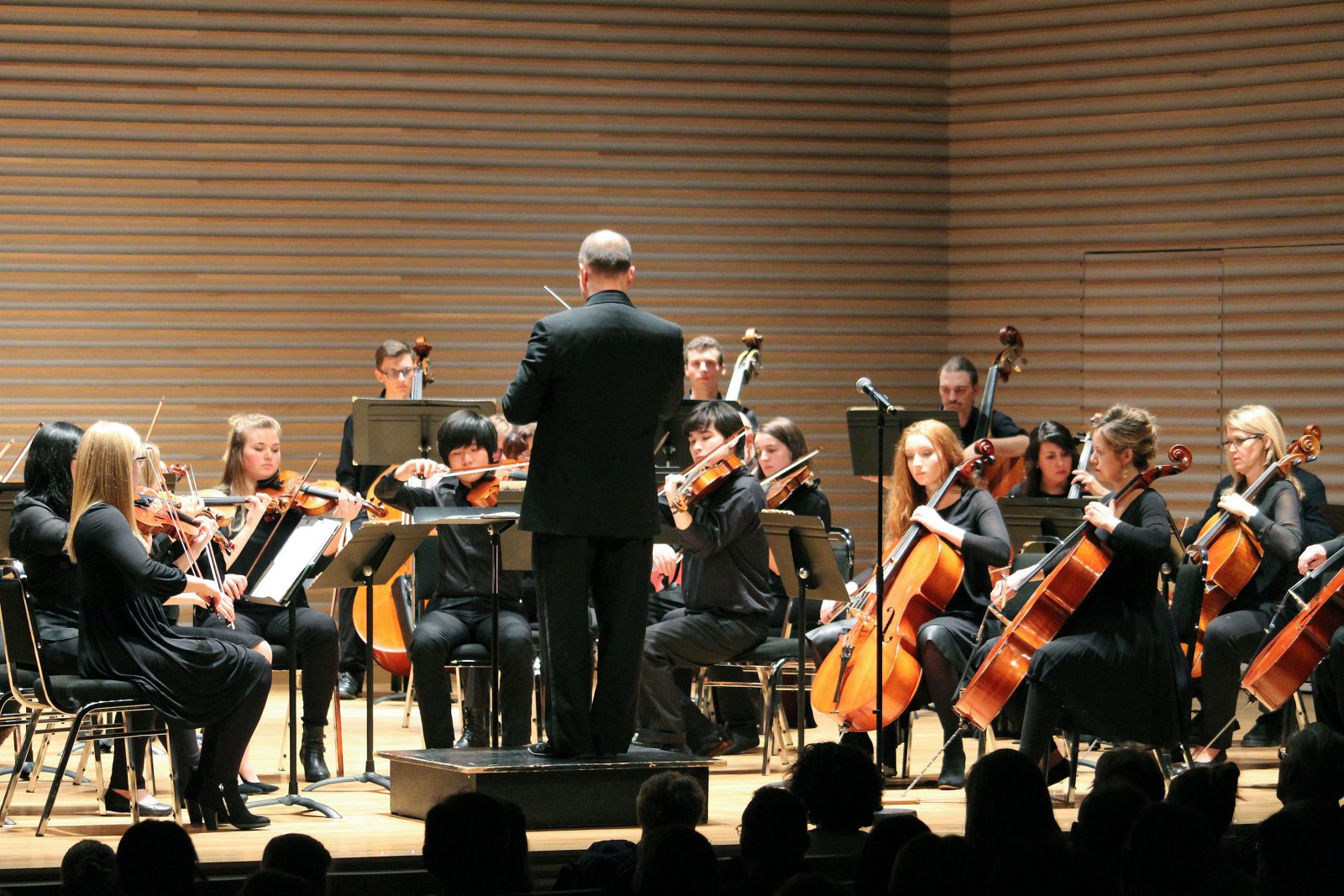 George Cleland and the Brock University String Orchestra will be back on the stage soon to conclude its season.

The Brock University Wind Ensemble and String Orchestra will conclude their seasons with popular repertoire and world-premiere performances in two upcoming recitals.

Presented by Brock University’s Department of Music, the Wind Ensemble will host its recital, A Touch of Latin, on Tuesday, April 2 in Partridge Hall of the FirstOntario Performing Arts Centre (PAC).

The Orchestra’s recital, A Spring Serenade, will take place on Wednesday, April 3 in the PAC’s Recital Hall.

Conducted by Zoltan Kalman and George Cleland, respectively, the Wind Ensemble and String Orchestra bring Brock University students together with members of the community to perform for the public. These performances are a key part of the Marilyn I. Walker School of Fine and Performing Arts’ (MIWSFPA) mandate of building connections between the Niagara community and the breadth of talent and creativity at Brock.

At A Touch of Latin, Kalman said concertgoers will be treated to an evening of brilliant works from a range of composers such as George Gershwin and John Mackey.

“Our show will also feature an intriguing mix of different musical styles and three soloists — Mark Roberts, Rebecca Heathcote and myself — performing a world premiere under the baton of Sarah McKean,” he said. “From the high energy Redline Tango, to the splendid melodies of Cuban Overture and the grandiose Music for a Festival, our repertoire will highlight the versatility and brilliance of this dedicated group and offer non-stop entertainment for all ages.”

Cleland said he is looking forward to the String Orchestra’s concert because preparations for the recital showcased a great period of growth for the players.

A Spring Serenade will feature a performance of Tchaikovsky’s Serenade for Strings, which Cleland said is “one of the most popular pieces in the string orchestra repertoire, loved for its beautiful melodies and sensitive use of the tone colours of the orchestra.”

Guests will also hear Vaughan Williams’ Fantasia on a Theme by Thomas Tallis, which is “a rich and intricate work, playing with antiphonal sound by breaking the ensemble into a string quartet and two string orchestras,” Cleland added.

Tickets to A Touch of Latin and A Spring Serenade are available for purchase from the FirstOntario Performing Arts Centre box office by phone at 905-688-0722 or online at firstontariopac.ca

For more information about the concerts or other music programming, visit brocku.ca/music